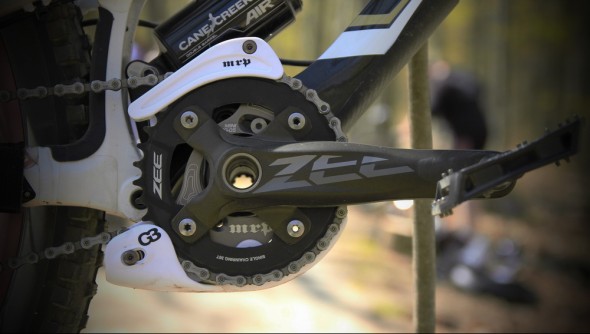 Some time has passed since I introduced Zee, Shimano’s new budget-friendly downhill component group, after Interbike 2012. The results are in, and I believe Shimano hit this one out of the ball park! Since I last installed the Zee on the V10C over the winter, I have put considerable time on it, and am quite surprised at how well the whole group works. 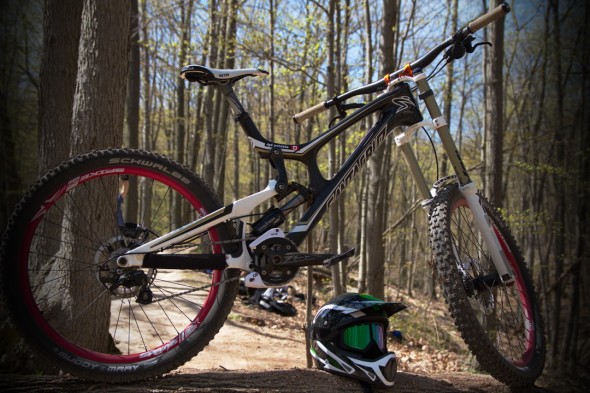 Near the end of my review, I changed the SM-RT81 rotors that were supplied with the Zee brakes to the SM-RT99 Ice Technology rotors shown below. The SM-RT99 are the Saint-level rotor, but work on the Zee hubs. I was thoroughly impressed when I checked these out at Interbike, and I had to get them on my bike to see if they made a difference. The 99’s definitely catch people’s attention. More than once, I had people scoff at the size of them, then, on closer examination, ask what the fins are for. Once I explained the technology at work, people were very intrigued. As for what that new technology actually is, here’s how I described it after Interbike:

The new Ice Technology rotor [features] three-layer construction on the braking surface and aluminum spider. The SM-RT99 comes only in a 203mm diameter. According to Shimano, this rotor is their best to date, running 50°C cooler, with a 20% net increase in stopping power and pad life, and 20% reduction in brake fade. . . . The SM-RT99 is only available for center lock hubs.

I, for one, really wanted to see them in action. 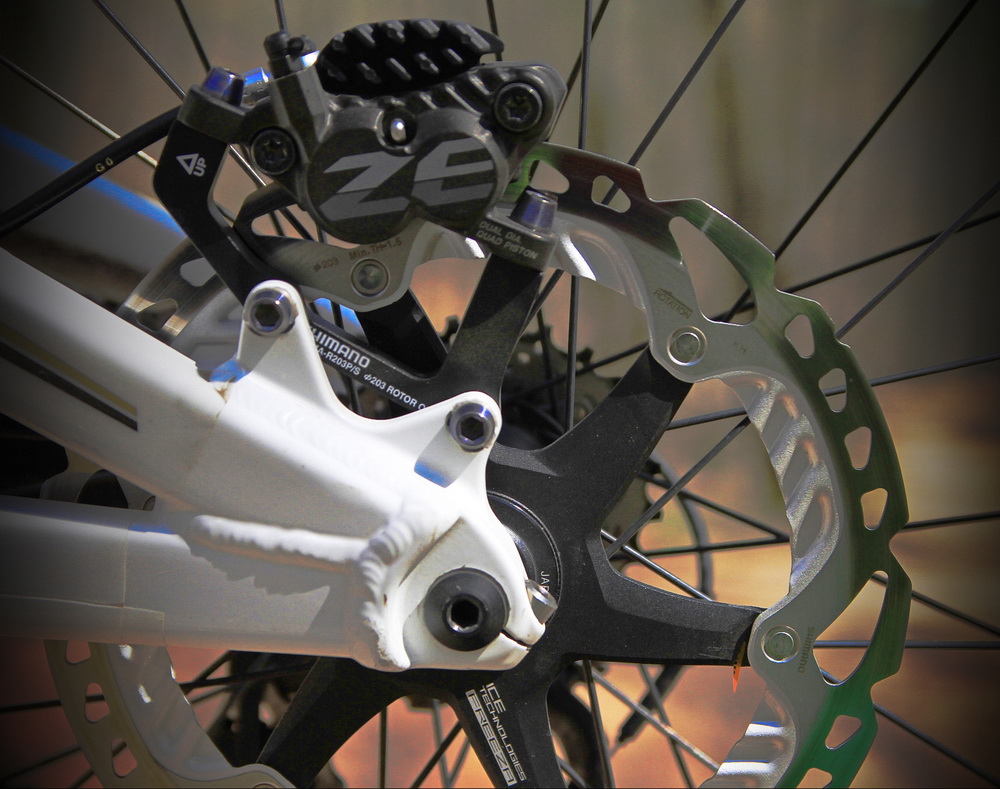 Having ridden the complete Zee group, the Zee group with Saint rotors, and the all-Saint group, I can say that yes, I could feel a difference in braking performance between the different setups. I have read on other websites that Shimano shot themselves in the foot by producing such a good entry level group, but I don’t think that’s the case. Yes, braking performance is excellent with the all-Zee group, but I think that’s Shimano’s way of upping the stakes.

The Zee’s braking power is high, and modulation feels great. When purchasing the Zee group, you’ll get a great lever feel as well. Using one finger, which fits comfortably in the nook of the lever, I found I had great control over my brakes. At any time, with a firmer grip I could have locked the wheels without any issues, but I didn’t need to as I had excellent modulation control. I found that I could ride the brakes and not worry about over heating the rotor, compared to solid-style non Ice-Tech rotors. The wavy alloy center fin works as advertised! 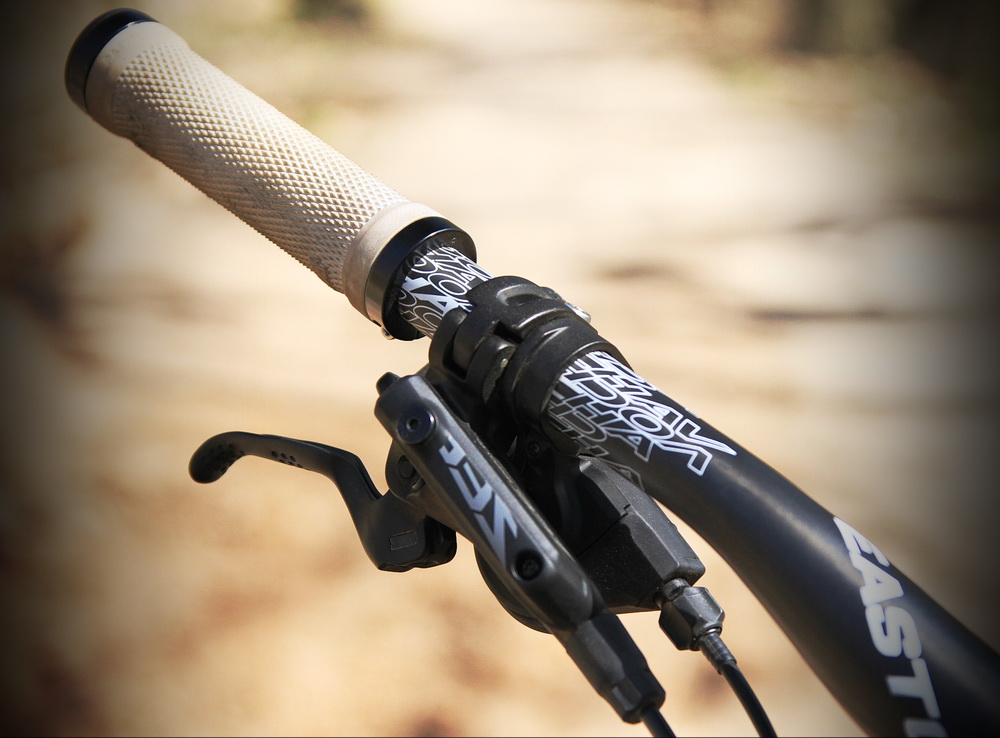 The only thing that the low-cost Zee group lacks are some of the adjustments available in the higher-end groups. Gone are the dial reach and contact point adjustment, but reach still can be adjusted with an allen key. A slightly-different cast body and reservoir cap round out the changes in the lever. As far as the caliper is concerned, a bit of machine work and the substitution of a cotter pin for pad retention lower the cost on the caliper. 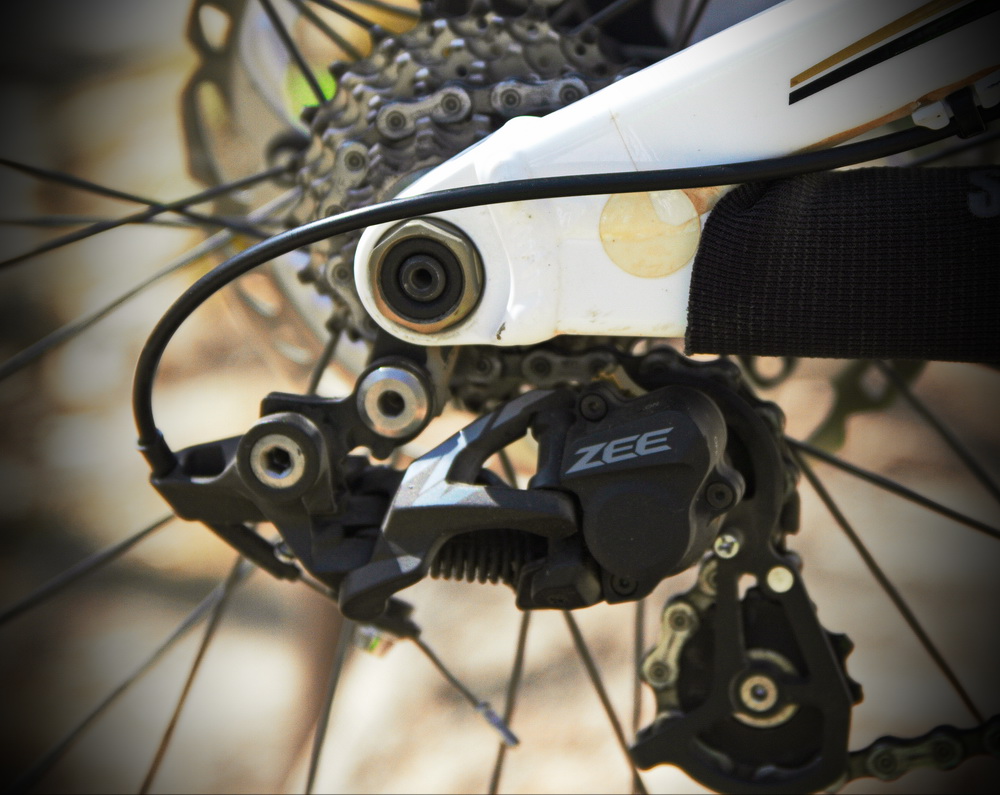 As far as shifting is concerned, I am eating my words. At one time I said that SRAM was shifting down and had over taken Shimano. Well, I can’t say that any more. The new Zee rear derailleur works very well. The new Zee has a much more positive shift response compared to older Shimano groups, which I like.

At about $110, you’re getting a derailleur with top-level performance at an affordable price. The derailleur I tested is the downhill-specific one, which is good for a maximum tooth capacity of 28t. If you plan on getting one for your enduro bike, be sure to check out the freeride version.

Contributing to this derailleur’s superior performance are the robustness of the build and the precision of its shifting. Add to that the clutch, and you’re really in business!

I have become a big fan of clutches in derailleurs, and this one is no different. I found that the Zee’s clutch works very well at keeping the chain from slapping around. Unlike other clutches, this one can be serviced, and the tension can be adjusted. I found I was breaking cables more frequently on my 2012 SRAM XO clutch-style derailleur compared to the the Zee. So far, I haven’t broken a single cable on the Zee, which is definitely a good thing. 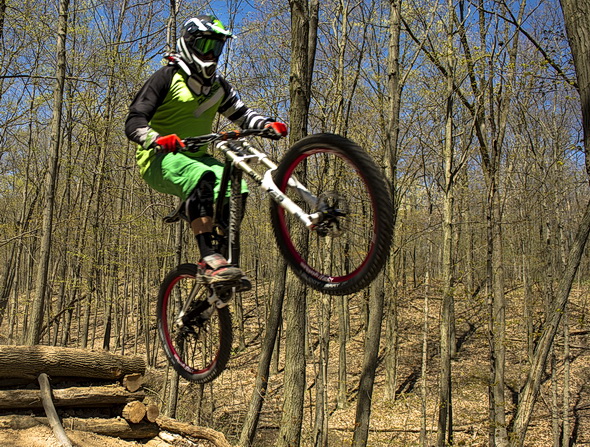 If you’re looking for a kick ass group and don’t want to break the bank, do yourself a favor and check out the Zee group for your next single-ring enduro or downhill rig!

MSRPs for all Zee components (which saves $760 compared to the Saint group):

Thanks to Shimano for providing the Zee component group for review.

I’m using the Zee freeride derailleur on a 1×10 setup. After 500 miles its performed flawlessly with minimal adjustments. The Zee shifter is also strong, both are a excellent value IMO.

Those rotors are sweet. There should be 160’s available too, though they might have a different name? Shimano’s recently introduced hydro road disc brakes are only approved for use with those style ice tech rotors, with the fins, because they disipate heat so well. They make them in 140mm and 160mm if my memory is good, and only in centerlock.

how have the hubs worked out? i notice not much was mentioned about them in your review. i`m considering them as an option for my building. reasons two fold – price and compatibility with the entire Zee setup.

The Zee hubs hold out well. I have no issues so far.. Good deal on them.