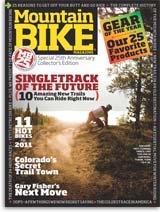 After 25 years (!), Mountain Bike magazine will cease publication with the November, 2010 issue. Parent company Rodale Inc. plans to fold the content into Bicycling magazine and Bicycling.com so all is not completely lost. In a lot of ways this isn’t a huge surprise – over the past few years Mountain Bike magazine only existed as a bi-monthly supplement to Bicycling magazine. Here’s what one Rodale exec had to say about the decision:

“More and more Bicycling readers are also riding mountain bikes, extending their passion from the road to the trail, or in places like the northeast, carrying on their training through the colder months,” said Chris Lambiase, SVP / Publishing Director for Rodales sports titles. “Integrating Mountain Bike into Bicycling brings a new dynamic to the industry, allowing us to deliver more mountain biking content to the largest cycling audience in the world.”

Clearly many factors probably played into the decision – new niche MTB competitors like Decline, the rise of the internet, and the desire to broaden the appeal of Bicycling magazine. Still, 25 years was a long run – RIP Mountain Bike Magazine.

This is sad, not because we’re going to lose a mountain bike specific mag. But rather that the whole thing is going to be wrapped up into Bicycling. I suppose we’ll see some good changes though since they recently lost their editor who co-wrote the Landis book.

I highly suggest everyone pick up this last issue and read the Gary Fisher article, its pretty solid.

What do you expect with issues that are barely 50 pages filled with fluff?