I got in a quick ride on a Yeti SB95 at Outerbike last month and had a great time. In case you missed it, mtbgreg1 rode this bike at Interbike and jeff demo’ed an earlier version last year.

There has been a lot of buzz about the new ‘switch‘ suspension technology from Yeti, and it is definitely well deserved. In non-engineering terms, Yeti employs an eccentric (not round) suspension link that rests in a position that counter-acts pedaling forces when climbing, but then moves around the axis of the link to ‘open up’ when the trail turns downhill. 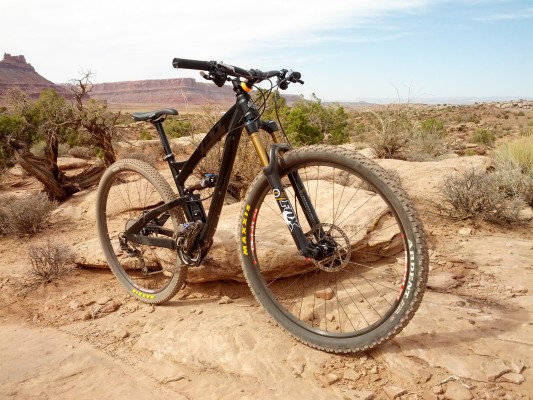 While I (mostly) could not really feel the suspension doing anything special, the end result is impossible to ignore. Yeti has actually managed to create a 29er that climbs efficiently, and then descends confidently with plenty of plush travel.

The reason I said ‘mostly’ on feeling the switch link doing its thing … well, let me tell a little story. On the Lazy/EZ demo loop there is a thin slab of rock sticking up about 6″ out of the soft sand on either side. On the first lap of the first day, we saw a guy do a spectacular endo over this rock. (He was ok, as he face planted into deep, soft sand.) Anyway, I kind of made it a point to ride over this rock on every lap with every bike I demo’ed, just for grins.

So I hit this same rock with the Yeti SB95, and when the rear wheel encountered it the switch link engaged all at once with a loud BANG reminiscent of a missed shift on an old manual truck transmission. It scared the crap out of me! A quick inspection revealed nothing out of place and the bike performed flawlessly for the rest of the ride. 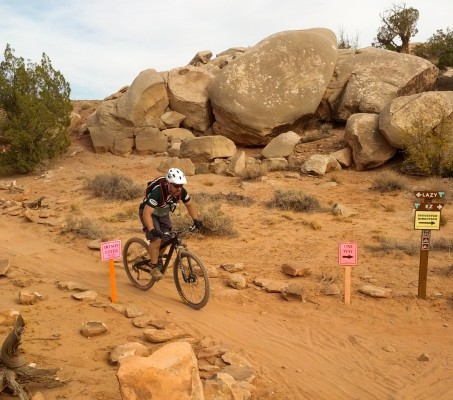 Aside from that bit of weirdness, this is one awesome handling bike. I live in Colorado and I regularly ride on the trails where Yeti does their product testing, and it is very apparent that all of that gnarly riding has resulted in a radical new suspension design.

If you are in the market for a capable all mountain 29er bike that is also an excellent climber, then take a hard look at the Yeti SB-95!

The use of eccentric pivots in place of actual linkages is genius IMO.

My buddy picked this up this year, and I’ve barely seen him on the trail since, even when we’re riding together. He climbs like a hot air balloon.

Ok, I’ll be honest. I don’t climb like a hot air balloon with my new Yeti. Coming from riding a 26er HT to this, though, has given me immense confidence on the trail and I find myself grinning non-stop. I really feel like it is a perfect do-it-all bike: climbs great and it absolutely crushes the descents. I call it “the trail destroyer.”

” I really feel like it is a perfect do-it-all bike: climbs great and it absolutely crushes the descents. ”

I second this. After riding the SB95 at Interbike this year, I’ve found myself riding along the trail wishing I was on one…