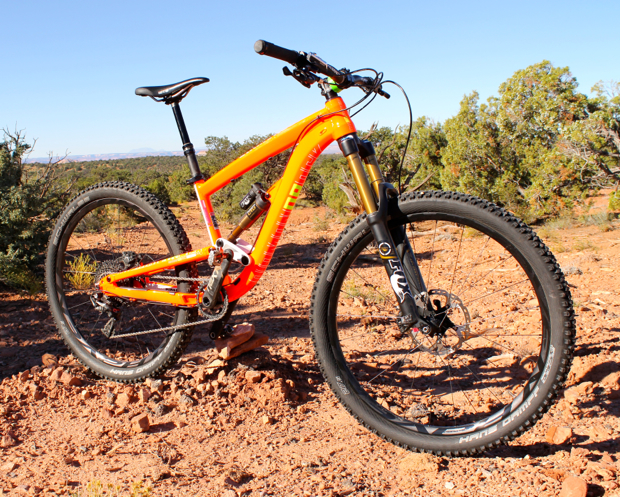 I knew that I had to get on at least one shuttle during my time at Outerbike, and having ridden Mag 7 (or, more accurately, Mag 3-ish) last year, I knew that would be a ripping descent with plenty of drops, jumps, and gnar–perfect for testing an enduro bike. The only question was, what bike should I select for my epic ride? After ogling the new Diamondback Mission Pro 27.5 the day before, I knew this bike would be more than capable of handling anything that Mag 7 could throw at it!

I had the pleasure of riding the top-end Pro build of the new Mission 27.5. While all of the current versions of the Mission are only available with an aluminum frame, the Pro weighs in at a very respectable 30lbs–which is less than quite a few bikes in this category with full-carbon frames. The Pro build kit features a Fox 34 fork, Fox Float X CTD rear shock, Race Face cranks, SRAM X01 1×11 for the rest of the drivetrain, Shimano XT brakes, RockShox Reverb Stealth dropper post, Easton Haven wheels, and Schwalbe Hans Dampf tires. The complete Mission 27.5 with Pro build kit retails for $6,500 MSRP, with prices on the other build kits going down from there. 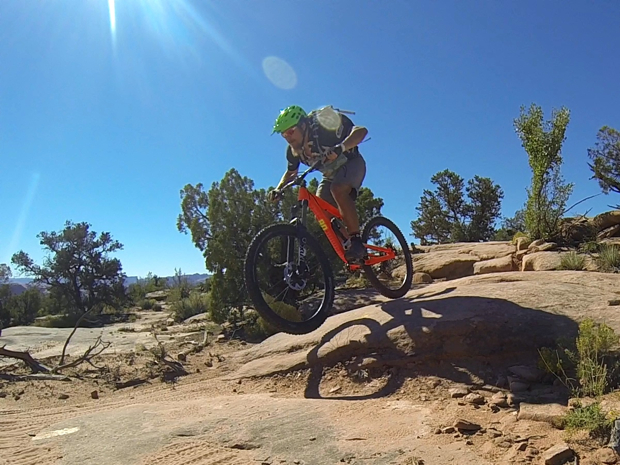 Featuring 160mm of travel front and back, the new Mission is bigger and burlier than ever! This rig features a redesigned version of Diamondback’s Knucklebox suspension–dubbed the Knucklebox Migration. Diamondback spells out the benefits of their suspension design in detail:

“The Knucklebox, or bell crank, is the core of our single-pivot four-bar suspension platform. Optimally-placed pivots equate to a low leverage ratio, and ultimately to superior pedaling efficiency and small-bump compliance. This also allows the shock to work more efficiently, reduces pedal induced motion, and reduces overall load on the system, which will lead to improved shock and bearing life.

Placing the Knucklebox low within the frame situates the greatest weight of the bike closer to the bottom bracket, which lowers the bike’s center of gravity and allows it to track and corner better.

Wheel rate is a significant aspect of any suspension system. Wheel rate is the effective spring rate when measured at the wheel. A benefit of our four-bar linkage is increased control over the wheel rate. Obtaining the spring rate curves in shocks from Fox is necessary to allowing [sic] us to determine the wheel rate. Working closely with Fox, we’re able to optimize the wheel rate to be linear-to-slightly progressive. This results in superb small-bump compliance, more perceived travel, and excellent bottom-out protection. . . .”

Out on the trail, I instantly found the Mission to be an aggressive all-mountain/enduro bike. Out of all the bikes I tested this year at Outerbike, the Mission felt the most aggressive of the bunch. This is truly a point-and-shoot gnar slayer that doesn’t think twice about blasting through any manor of chunder, or airing out huge drops and jumps. This bike can slay way bigger terrain than I probably ever will, but even with my meager skills I was able to blast off of Moab’s slickrock ledges to sketchy landings with ease. 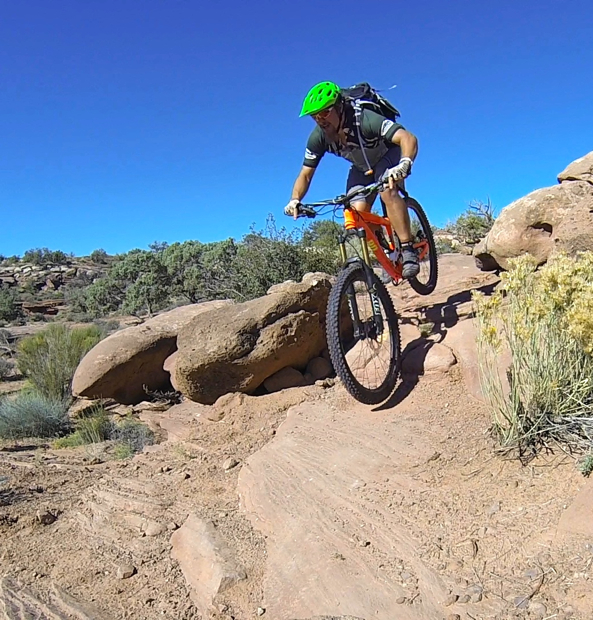 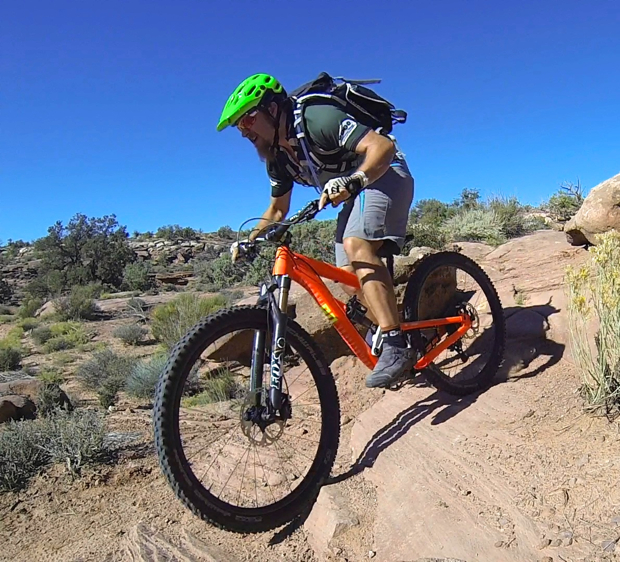 Indeed, there was even one ledge that I rolled up to slowly, thinking it would be a rock roll feature. Instead, it turned out to be a sheer dropoff! I jumped/lunged off the ledge to avoid endoing, and fell about 4-5 feet straight to flat, with no imitation of a transition whatsoever at the bottom. But I barely even felt the impact through the Mission! I heard a big “whump” as I thudded down onto the ground, and looking at my suspension O-rings I went through all of the travel, but the Mission took that horribly-executed drop in stride, popped up, and kept rolling like nothing had happened. On a lesser bike, that line choice error on my part could have been disastrous. On the Mission… well, if I hadn’t been writing a review of this bike, it wouldn’t have been worth mentioning since it was so uneventful.

One thing the Mission is not is a climber. The 66.5-degree head tube angle provides all of the great shredding capabilities mentioned above, but this bike just isn’t designed to climb. Sure, you can lock out the CTD suspension easily, but that still doesn’t change the geometry and burly build of this bike. However, I don’t think the climbing limiations are a big issue: this is an aggressive shredding machine that is designed to go stupid-fast, go stupid-big, and bring the rider through those situations unscathed. If you’re looking for a do it all bike, look elsewhere… maybe the Sortie would be more up your alley? But if you’re into slaying gnarly terrain and big hits at high speed, while maybe accessing that terrain under your own power, the new Mission 27.5 is the rig for you.

If you want to see the above shots in motion, check out these quick clips of the Diamondback Mission: