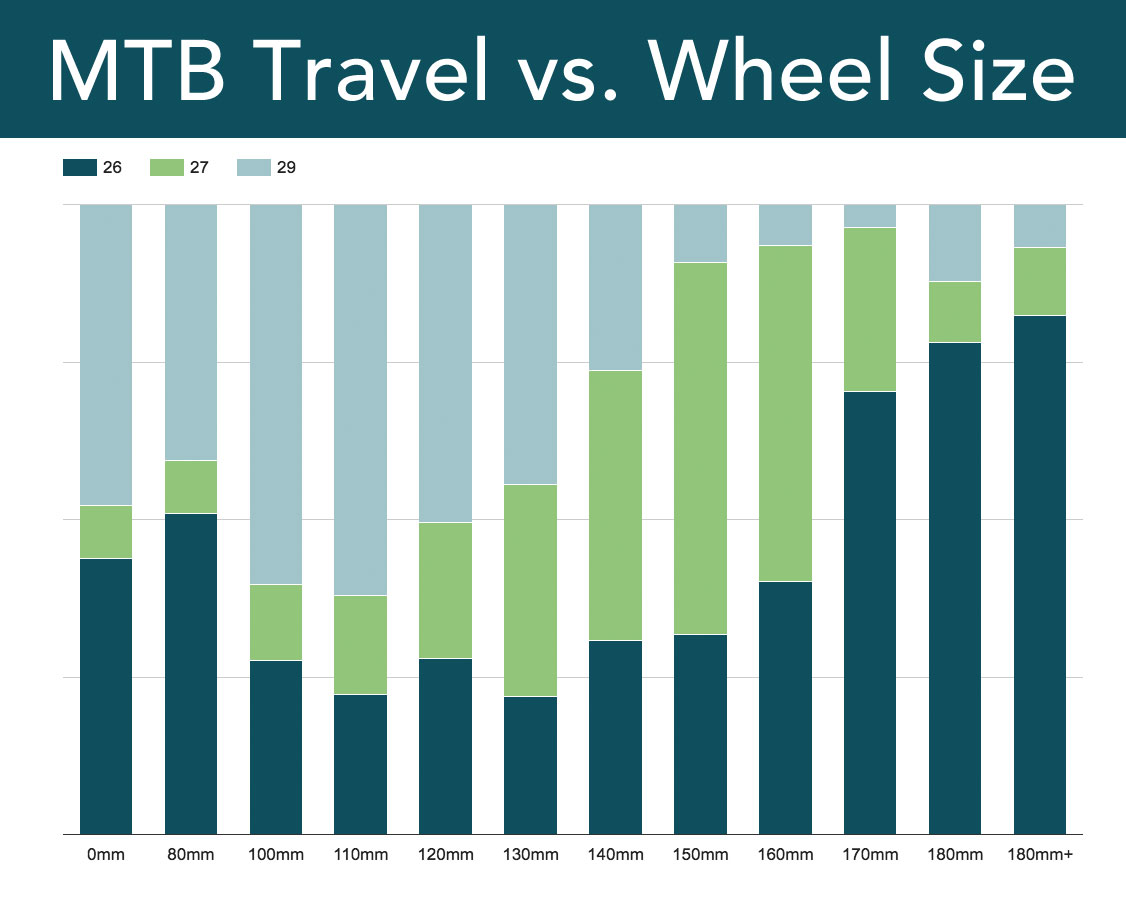 At this point, most of us understand that 29ers work well for shorter travel applications while bikes with more suspension typically utilize smaller wheel diameters. Well, here’s a cool visual representation of this concept!

The chart above was built using data from a survey we ran a few months ago asking mountain bikers about the bikes they own. This chart summarizes the attributes of more than 6,000 rideable mountain bikes, though not all are necessarily their owner’s primary ride.

So what’s going on? Starting at the right side of the chart, we see that mountain bikes with more than 160mm of travel are predominantly 26ers. Interestingly, today most DH bikes on the market are actually 27.5″ but remember, our survey asked people about the bikes they already own. So uptake is a little on the slow side… maybe people just hang onto their DH bikes longer than other types of bikes.

Note: a few people claimed to own DH 29ers but we doubt they really do. These people are either confused, trying to throw off the survey data, or are possibly riding some kind of custom death rig on the trails.

The green bubble growing at the middle of the chart shows that 27.5″ bikes dominate the 140-160mm travel segment of the mountain bike market. This is essentially what many call the all mountain / enduro segment. Again, using this chart to understand bikes on the market today isn’t necessarily helpful, as this data is essentially backward-looking. Still, some might be surprised at how quickly 27.5″ wheels have come to dominate this portion of the market.

For this chart we lumped 27.5 and 27.5+ into the same bucket. From what we’ve seen of the relatively new 27.5+ wheel size, this newer wheel size is having more of an impact on the left side of the 160mm line than the right.

Based on our survey data, more people owned 29ers than bikes of any other wheel size. These bikes firmly dominated our chart from 0 to 130mm of rear suspension travel, particularly around the 100mm mark.

However, something interesting is happening at 0 and 80mm of travel: 26ers are holding their own! One major explanation is that we lumped fat bikes in with 26ers and fat bikes rarely offer much, if any, suspension. One other explanation is that people may be holding on to vintage bikes built back in the days before rear suspension and larger wheels. Finally, the most entry level of mountain bikes are still 26ers, and most of those come with 80mm suspension forks, which could account for the uptick at the 80mm level.

What stands out to you about the travel vs. wheel size chart above?

You’d probably have to out source a separate team, but it’d be cool to gather data on current offerings from most to all manufacturers to see differences between what people currently own and where the market is trending. My guess is that 26er rep would decline across the board, 27.5 would be bigger, and 29er would also get bigger with more rep in the longer travel sections.

Yeah, the market is constantly changing! Not only that, just looking at what’s being offered doesn’t tell us what’s actually being purchased. Now if we could just convince every company to share their sales #s…. 🙂