I first heard of Vee Rubber at the Southeast Bike Expo, where they had a booth set up with lots of tires on display. I ended up spending a good chunk of time talking with the designer, and walked away with a pair of Mission tires to test! But before I tell you about the tire, let’s talk about the company behind them.

Quick History and Hints of The Future

You may have never heard of Vee Rubber before, but they’ve been producing tires for over 30 years for other companies. Now they are bringing their own line of tires to the market. They’re debuting with a lot of options:over twenty different mountain bike models, most available in multiple widths (some even come in fatbike sizes!) and all wheel sizes: 26″, 29er, and 650B. The high end tires are mostly folding bead, dual compound, 120tpi casings, and retail for only $40 – way less than many of their competitors. They also offer some lower priced wire bead tires. 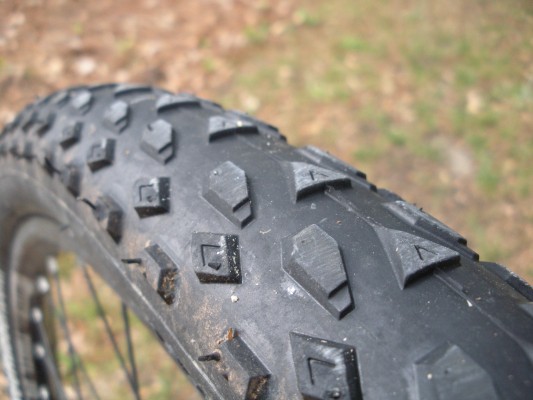 If you look closely you can see the two different rubber compounds: the darker rubber in the center is a harder durometer for better wear resistance, and the lighter colored rubber used on the shoulders offers more grip.

In my chat with the designer of Vee Rubber’s mountain bike tires (he previously worked for Kenda for 15 years) he hinted at a few things he’s working on. The most interesting item is some sort of airless tire that would use a proprietary rim, and would have some way of adjusting stiffness, but no air and no possibility of flatting. He wouldn’t give any other details since he’s still working on it and it hasn’t been patented yet, so we’ll just have to wait and see what he has up his sleeve.

On To The Tire Review: Specs

Now that you know who Vee Rubber is, let’s get on with the review.Here are the details on the tire I was given:

The Mission isdesigned to go fast, with seven rows of low-profile, widely spaced knobs. The center row has siped and ramped triangular knobs spaced pretty far apart, and as you move over to the transition and shoulder knobs they get slightly taller and more closely spaced together. 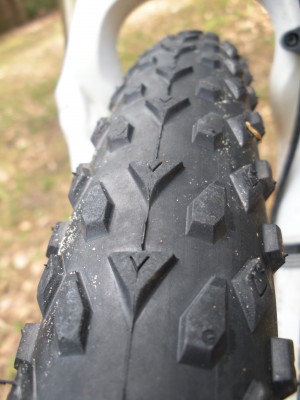 I was told the tires are sealant compatible, but there’s no mention of it anywhere on the Vee Rubber website or the packaging that came with the tires. But I set them up tubeless anyway, because, this is 2012 – who uses tubes anymore? I was not able to get the tire set up on a pair of UST rims using a floor pump. Not surprising really, since the UST rims are designed to work with UST tires (some tubeless-ready tires do work on them however). I was able to get the tire mounted on a set of non-tubeless rims set up with the ghetto tubeless conversion. 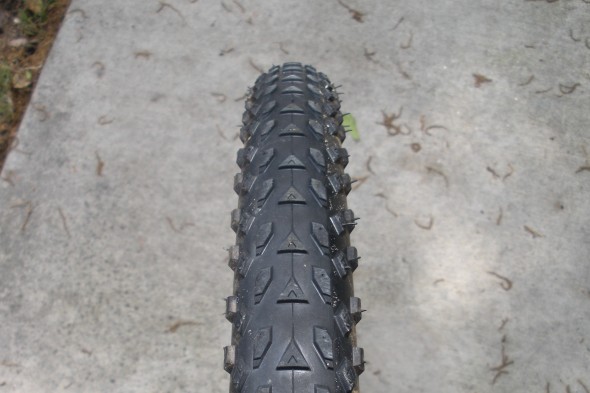 You can see just how rounded/pointy the Mission’s profile is.

This is a skinny 2.0″ tire. At least, it looks skinny at first, but it’s actually the same width as some other 2.0″ tires I have. The tire looks skinny because of the profile: very rounded, almost pointy even. I put it on the front of my geared hardtail paired up with a Specialized Renegade in the back.

First thing I noticed: speed! Combined with the Renegade it was a FAST set up. I was a little worried about grip however, especially up front where I typically use a meatier tire. My first ride was at the Canal Trail – a super tight and twisty loop in the city limits. We had hero dirt that night, and the Mission never let me down. It never slipped – I ran out of guts before the tire ran out of traction. 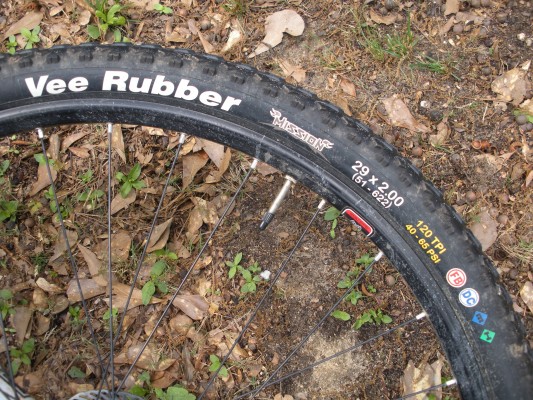 Lots of decals on the sidewall!

The next ride was at the Chainbuster’s Granite Grinder – a 6hr race at the Georgia International Horse Park (we didn’t race on the granite side however, despite the race name). Conditions were super fast, dry, hardpack. Again, the Mission was great, no problems whatsoever. The Mission provided tons of grip, and the tall pointy profile actually makes it a comfortable riding tire since it is ‘taller’ and has more room to compress over roots and rocks. The Mission does struggle as a front tire in loose conditions however. The large, flat, low profile knobs simply don’t dig into loose dirt. It’s not terrible, but you do have to watch it when trying to go fast. Braking was very good. The big flat backside of the triangular center knobs do a good job of gripping and keeping everything under control.

Eventually I got to test the Mission in the wet – we got rained on one night at the canal for just a few minutes. Very little water fell, but, the top layer of dirt on the trail turned to grease. With more time, the water soaked further into the ground and the trail was fine, but during and immediately after the rain it was crazy slippery. When I hit the first sloppy corner I was on a very fast open section of the trail, and the Mission slid out instantly with no warning. It was followed by the Renegade stepping out, then me hollering as I did a two wheel drift off the trail into the grass at 20mph. Somehow the bike stayed upright – I’m chalking it up to dumb luck.

As I finished the lap I came to realize the Mission is no good in mud. In fact, it might be the worst tire I’ve ever ridden in the mud. Every tire will slip and slide in the mud, but hopefully they give you a little warning, and slowly lose traction. Not so with the Mission – it’s all or nothing with no transition between the two. I was understeering even in really slow speed corners.

I was given two tires so I put one on the front of my bike and gave the other one to a friend who was just putting together his first 29er: a Niner Jet 9. He put the tire on the back and had this to say:

Well, I’m better able to say after riding it in Pisgah yesterday. It actually performed very well. Hooked up well on the rocky and rooty climbs even with the bit of dampness on thetrail I encountered.I was very surprised at how well it did all around on those rugged trails. For sucha small size and minimalist tread design l never felt like I wanted or needed a different tire.
I think the tire is a good choice for a 29er FS rear. I try to stay seated when climbing more on my 29er than I did on my 26er. It stays hooked up well as long as you’re seated and climbing. Only spun out a couple of times in Dupont and it was fairly wet this morning. It probably wouldn’t be a good tire for climbing on a hardtail or SS when you need to stand and mash. 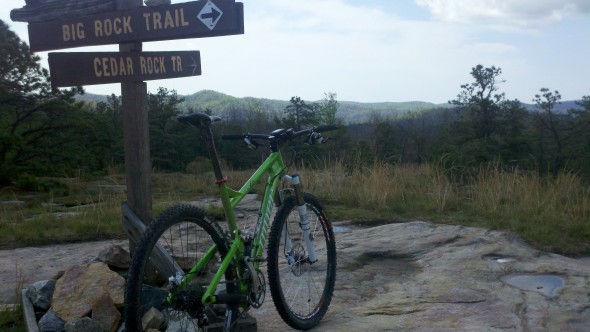 Mark put the Mission through its paces in Pisgah and DuPont, and came away impressed. Photo: Mark H.

The Mission is a good tire in the right conditions, and the price is a bargain compared to other high end tires. In the dry, it is fantastic. It never sliped on me when the trails were dry – not once. And I pushed it hard, but I always ran out of nerves before I ran out of traction. The Vee Rubber Mission is a very fast tire with very little rolling resistance. The weight is reasonable, but there are lighter tires out there. Performance in the mud is the biggest thing holding this tire back because it was super sketchy as a front tire when things got a little sloppy. But, thanks to the open tread design it never packs up with mud, so a few mud holes here and there aren’t a problem.

Bottom line: If you ride dry dusty trails, and want a fast tire with a lot of bang for your buck, the Mission should be on your list of tires to consider.

Special thanks to Vee Rubber for providing the Mission to review. Check out their website for the full line-up of mountain bike tires right here.

Community
Rooted Vermont: Business Up Front, Party in the Back—And All...
Gear
Get Away from It All with These Bikepacking Picks
Gear
A Stellar Self-Contained Bike Light Setup from Outbound Lighting
Gear
9 Game-Changing, Everyday Tools for Mountain Bike Maintenance
Subscribe
Login
Please login to comment
10 Comments
Most Voted
Newest Oldest
Inline Feedbacks
View all comments

Sounds like a good tire for out here in the southwest.

I’d say you’re right. Doesn’t sound too hot for here in the southeast. I need to check out the rest of their line.

Thanks for the write up. I’d like to know how it weirs over time?

@Bubblehead – Mark managed to somehow put about 250+ miles on his in the month he’s had it, he brought it back to me yesterday (it was mounted on some wheels he was borrowing till his own showed up), and it’s showing some wear. I’ll get some measurements and pics and post them here in the comments section later tonight.

Their site works fine for me.

@rshinn dgaddis, Mark rides 3 loops at FATS twice a week and that is not including his weekend rides. Good write up.

Mark’s tire has about 60% tread left after being used as a rear tire for what he estimates is about 400 miles. The triangular knobs in the center are worn enough so on some knobs you can’t see the “v” shaped cut in the as soon in the pics above.

I’m too up on the tire wear stuff, but at what percent would you consider a tire “done?”

I’m sure it varies, but is there general rule of thumb?

@Jared – like you said, it varies. Tires with bigger knobs can wear down a good bit and yet still have enough knob left to work decently well. Low profile knobby tires however (like this one, Kenda Small Block 8’s, Maxxis Aspens, ect) simply don’t have much knob to wear off, so, they’ll be ‘worn out’ a lot faster.