Though fortunately rare, nothing can ruin a ride quite like a collision on the trail. Whether it’s a mountain biker, a hiker, or an animal you hit, it is never pretty. Even a near miss can scare and anger both parties and damage trust between trail users. More common and less dramatic is a run-of-the-mill slow-speed conflict where a trail user just doesn’t see, hear, or understand you until you are a few feet from them – despite your best efforts to alert them. That is no fun either. The solution for these situations: how about a bell?

Mountain bikers can be quiet and fast on the trail. Kind of like deadly trail ninjas. Perfect for an assassin, maybe, but not so much for a responsible trail ambassador. This is where the TIMBER Mountain Bike Bell comes in.

In the past there were essentially two types of bells found on mountain bike handlebars: a conventional bell riders manually ring; and another that looks like a sleigh bell (better known as a bear bell) that rings non-stop while riding. Each has its drawbacks, though.

Ringing a conventional bell while descending a technical trail can be difficult and at times, unsafe. And always-on bear bells can get annoying. Many of us seek nature for the peace and serenity, not to hear an incessant bell. TIMBER seems to have created a successful compromise and solution for these problems. 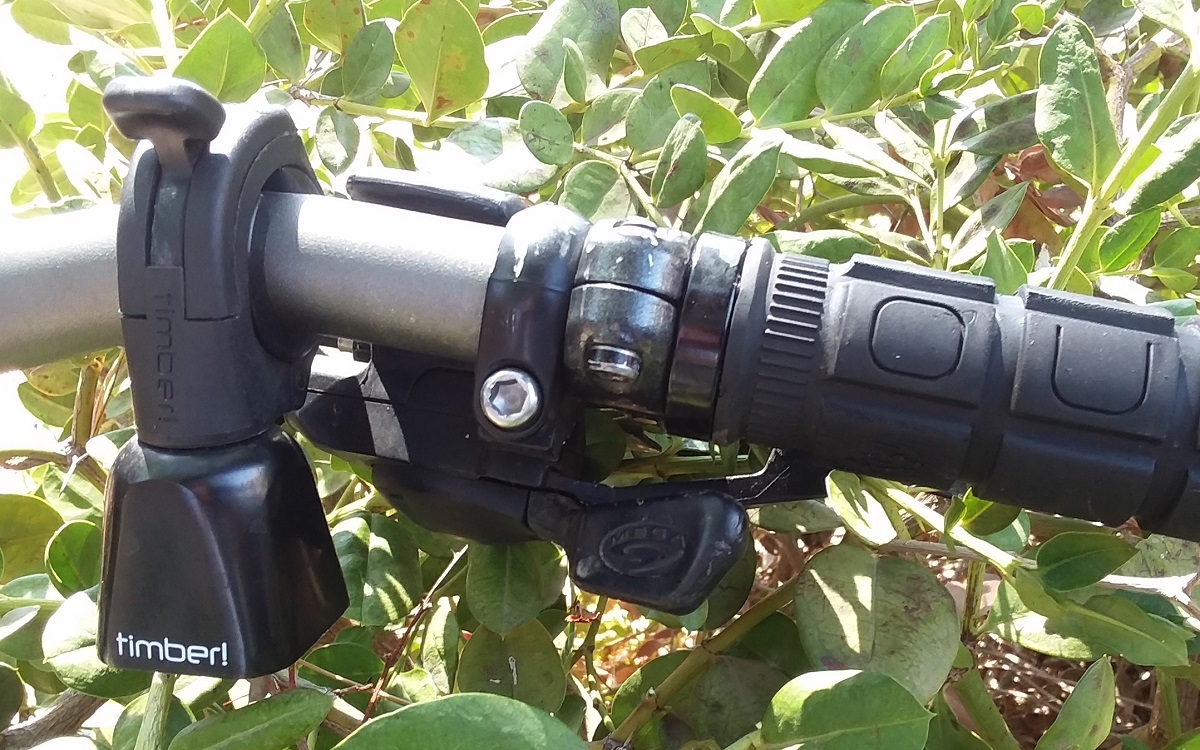 The TIMBER Mountain Bike Bell attaches to the handlebars and has an up-and-down lever with three settings for the clapper (the metal ball inside the bell). The bell can be set to loud, medium, or off, and the bell rings based on the movement of the bike. TIMBER claims that “because the sound is passive, you communicate to other trail users a friendly,’Hey, I’m just letting you know I’m here.’ The advance notice gives hikers or oncoming riders time to find a safe place to move off the trail.”

I have ridden with the TIMBER Mountain Bike Bell on every ride for over four months now and find it extremely effective at alerting other riders and hikers on trails in the Phoenix area, some of which are quite congested at times. It is pretty user friendly, too. TIMBER has two different models to choose from, either a bolt-on model or a quick-release model that attaches with a rubber O-ring. I didn’t want to risk the bell moving around during use, so I bought the bolt-on version. Even though it’s a bolt-on, the bell can be installed without removing grips, shifters, brake levers, etc. Either version costs $24.95 with free shipping from TIMBER.

I installed mine as close to my right shifter as I could, for a relatively easy reach while riding. After some trial and error, I found it was often best to just leave it off until I was approaching a rider, biker, or jogger from behind. When about 30 or so yards away, I switch it on to the loud setting, and then let the bell do its thing. The bounce of the mountain bike jostles the bell clapper, and it certainly gets a person’s attention. Though VERY loud, it also sounds like an ice cream truck, and has a random, uneven cadence to it too, which I think makes it more noticeable and distinct than other sounds on the trail. Long before you are even to the hiker, they typically are off the trail. I usually smile and say “thank you” or “good morning” as I slowly pass, turn off the bell, and am on my way. Some hikers even return the smile and reply with a “nice bell” or “love the bell.”

The other way I have used the bell is if I’m going through a prolonged technical downhill or a part of a trail with a lot of consecutive blind corners, I’ll just leave TIMBER on for the duration of that section. The sound can be a little annoying sometimes, but I feel it is safer than turning it on and off while my hands need to be on the handlebars and my concentration needs to be on the trail.

Lastly, up-and-down movement is needed to make this bell work. If you are on a very smooth trail or path, it won’t make a sound (unless you repeatedly lift your wheel off the ground). The bell is intended for mountain bikers to use on trails, so road bikers won’t find much use for this product. 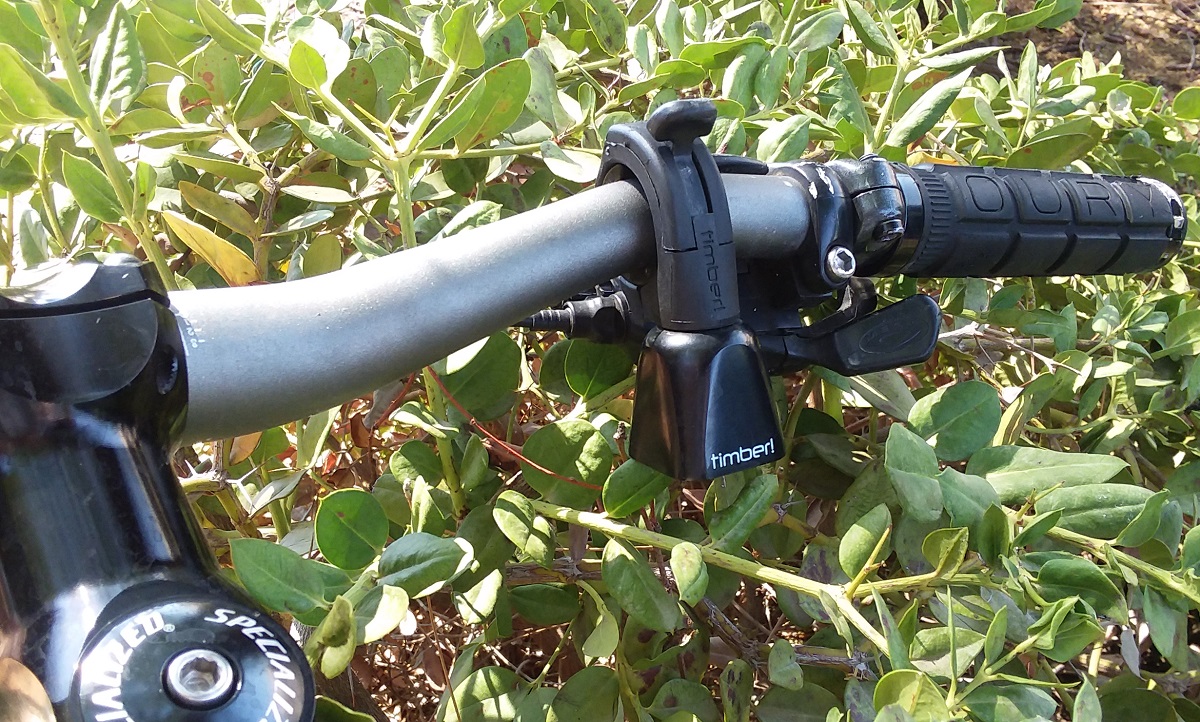 Bells aren’t meant for everyone. Some hate the sound or the further cluttering of their handlebars, while others ride in such seclusion that a bell isn’t really necessary. For the rest, however, this product is simple to use, fantastic at alerting other trail users, and puts the rider in control of the process. The price might scare a few away, but the $25 cost is certainly better than trail conflict or a trip to the emergency room. If you are considering a mountain bike bell, make sure to put this one at the top of your list.

Ray Southwick
Ray began mountain biking in 2005 in the Phoenix area, though he sometimes rides in Sedona, Tucson, and Las Vegas as well. Of average skills and limited bike-spending means, Ray proves that even with the predictable chaos of everyday family life, busy dads can (and should) bike too. He currently resides in Gilbert, Arizona with his patient wife and two very energetic young kids.

Neat bell. When I ride I just constantly shout DING DING DING DING as I pedal through the woods, alerting everyone to my presence. On days when my throat is too sore to shout, I fill my hubs, bottom bracket, headset, and drivetrain with sand, so that the horrific grinding warns other trail users that I’m coming.

I’m no longer going to tell people I’m a mountain biker. It’s “deadly trail ninja” from here on out! :^D