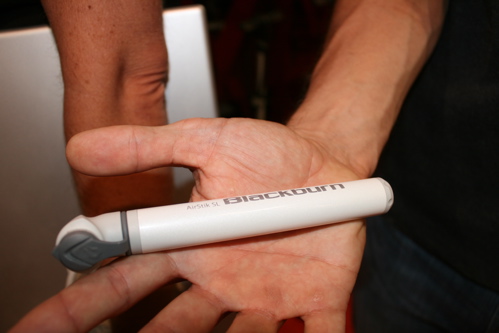 Ok, so I don’t have anything official to back this up but I discovered what has to be one of the world’s smallest bike pumps. It from Blackburn and it’s called the Air Stik SL. As you can see the thing is tiny, about the size of a Swisher Sweets cigar but waaaay classier. The pump barrel design comes from a former Fox suspension engineer who found a way to get maximum air volume from such a tiny package.

Blackburn also has one of the largest handheld bike pumps we’ve seen called the Mammoth 2Stage. This thing is beefy and it’s in response to the ever increasing tire sizes on mountain bikes these days (2.35×29 mountain bike tires hold a ton of air!). The Mammoth also includes two pumping modes – high volume and high pressure – to make pumping easier. Start out on high volume and as the tire inflates switch to high pressure to get just the right amount of air. Rad!