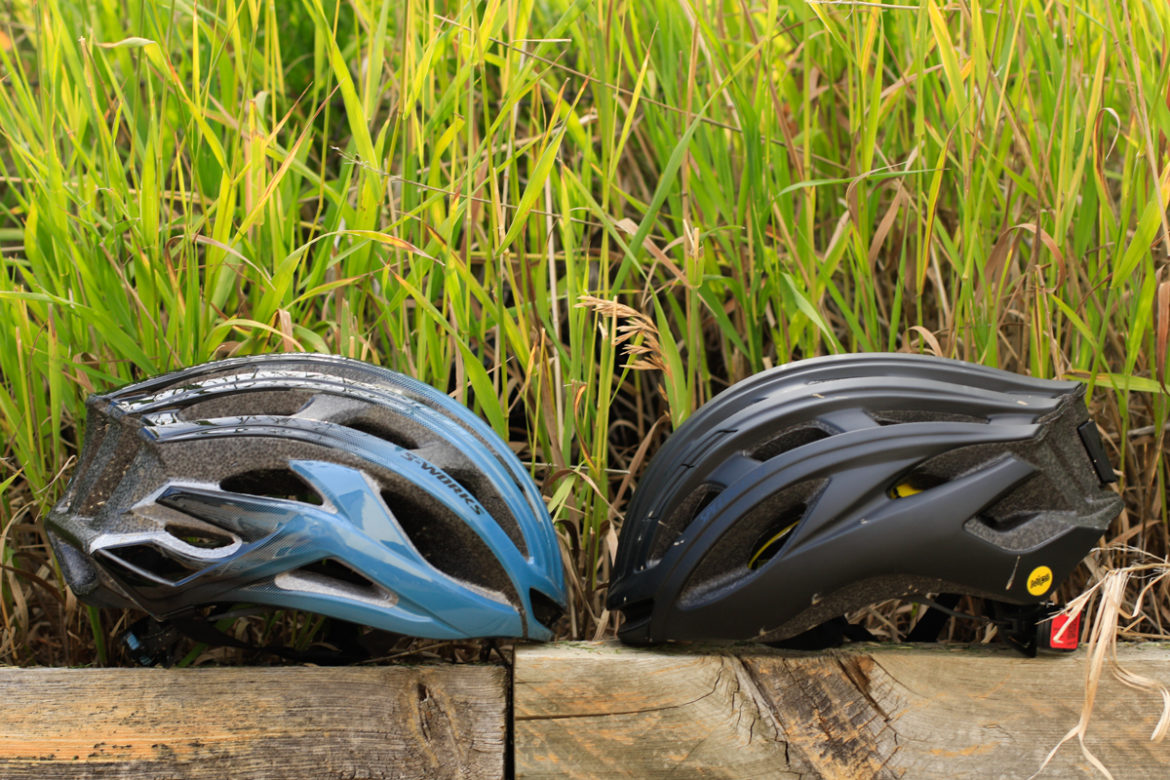 A helmet’s responsibility has expanded tremendously over the past few years and these days, they just might be among the world’s greatest multi-taskers. Take one of these Specialized helmets here. Upon impact, the EPS foam will crumple in order to slow linear acceleration. The MIPS liner rotates to reduce rotational acceleration and the chance of a concussion. The straps and fit keep it right where it needs to be. One of Specialized’s latest gadgets, ANGi (Angular and G-Force indicator), will also track your location with GPS, detect a crash, and send your emergency contacts an alert. Pretty cool, huh? 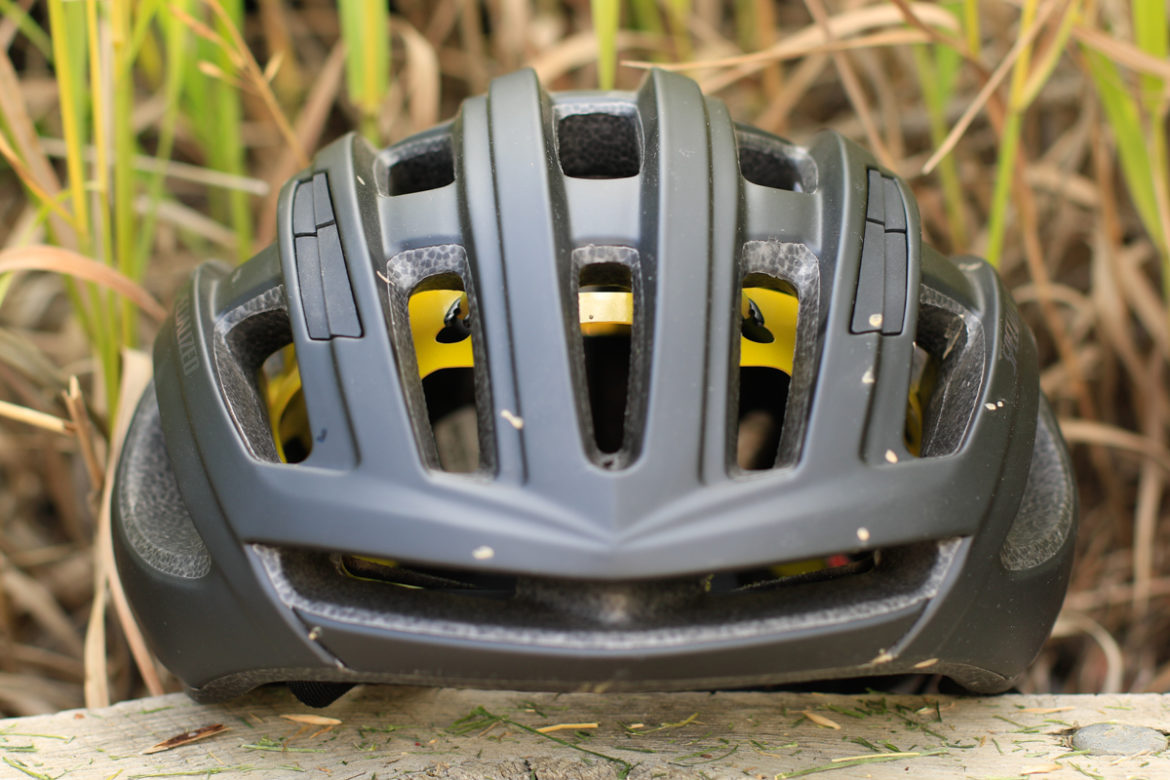 S-Works Prevail 2 features include above and: 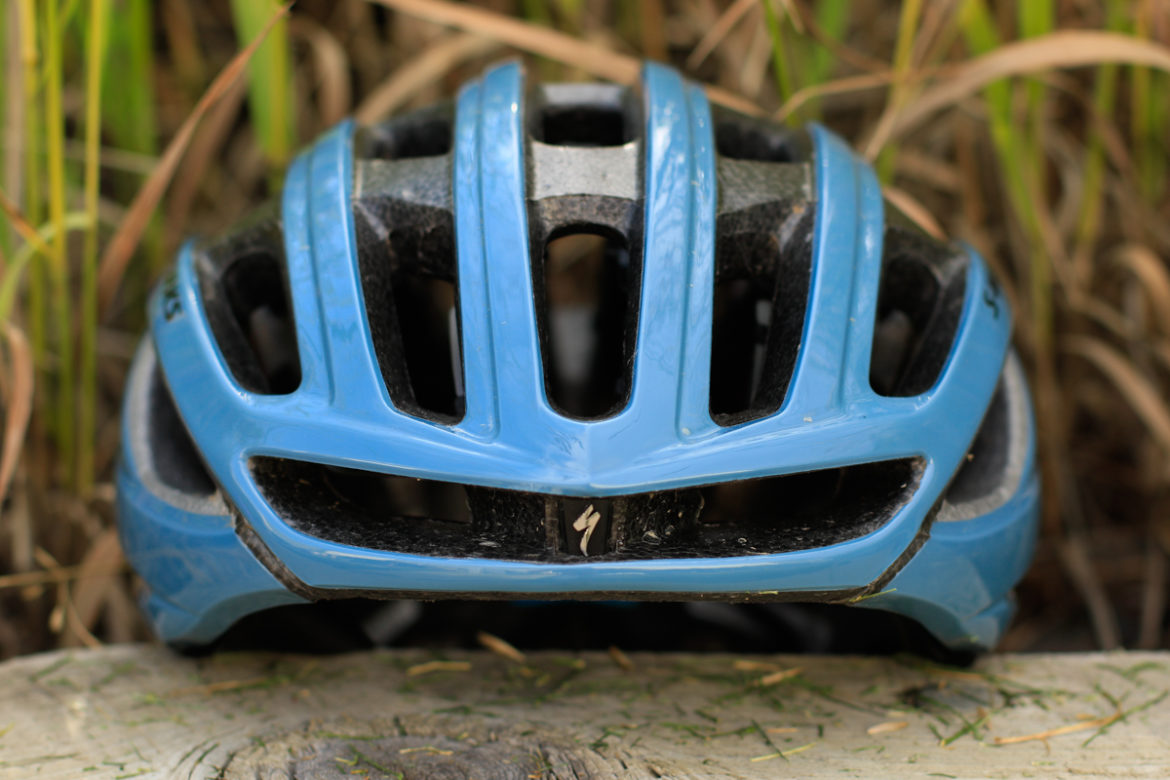 About the Prevail and Propero 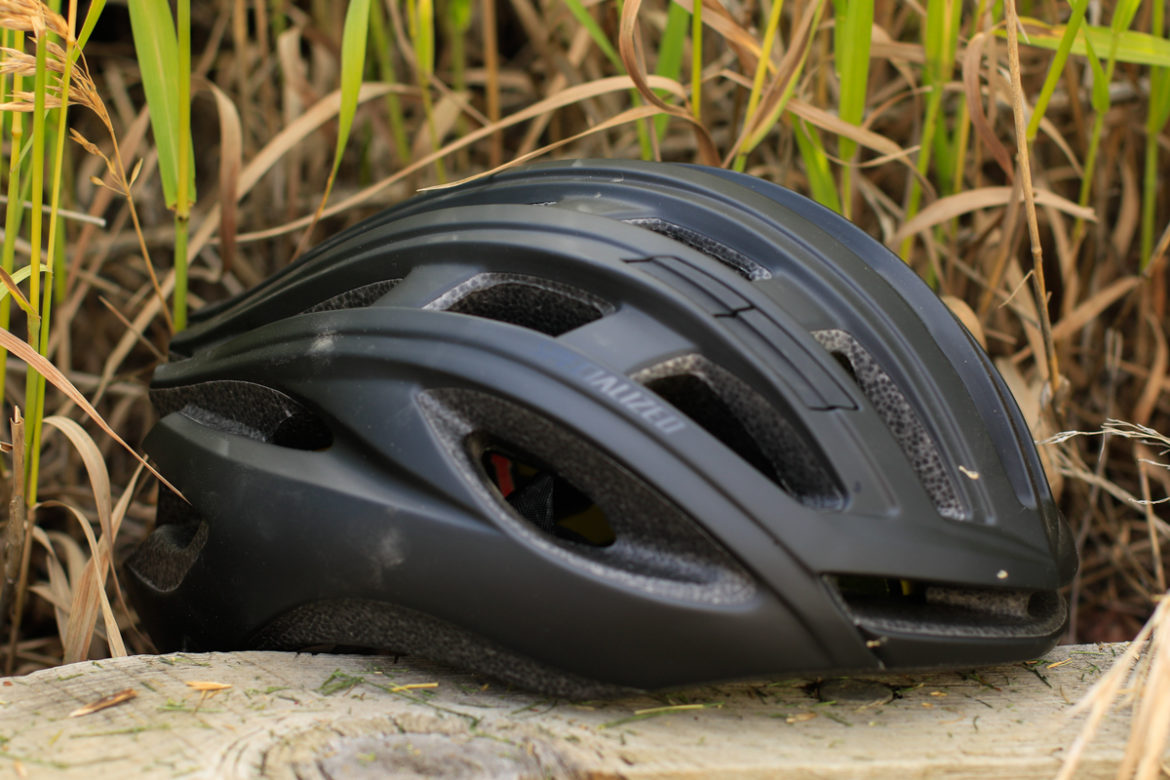 As you can see, the S-Works Prevail inspires the design of the Propero quite a bit. The lines, design, and fit are very similar. The shape is nearly the same, as is the placement of the vents, although the vents on the Prevail open more for better airflow, from the front to the back, including the intake and exhaust ports. Even the “Mouthport,” the horizontal vent that rests on the forehead, is slightly bigger on the S-Works. Of course, anything with the S-Works badge must be distinguishable from lower-shelved Specialized gear. The Prevail is overall slightly lighter, slightly slimmer, slightly more aero, and slightly sexier. 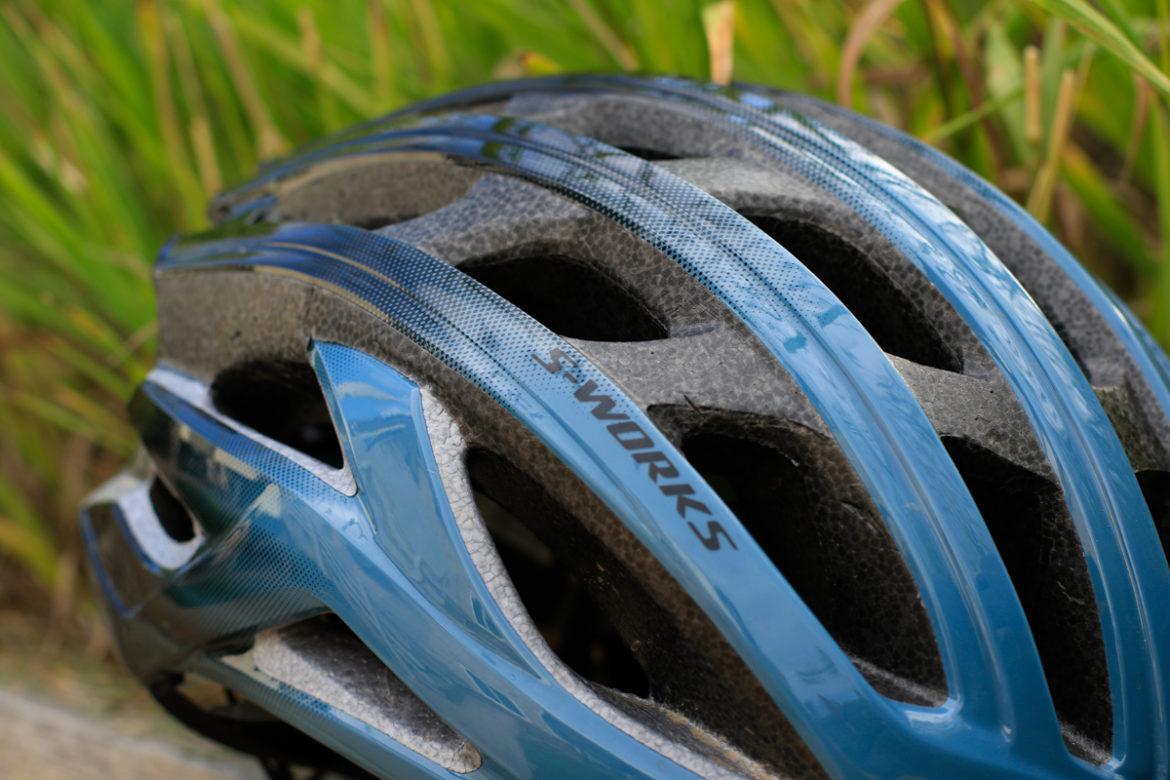 The Propero still gets all the important features that the Prevail has, like a MIPS liner, outstanding venting, an adjustable fit, and the ANGi sensor. The kicker: it’s almost half the price.

The MIPS SL featured in the Prevail helmet is slimmer than a normal MIPS liner, like the one that the Propero has. The Prevail’s liner is placed solely and strategically under the pads and venting of the helmet to stay lighter and bring more air to the head. 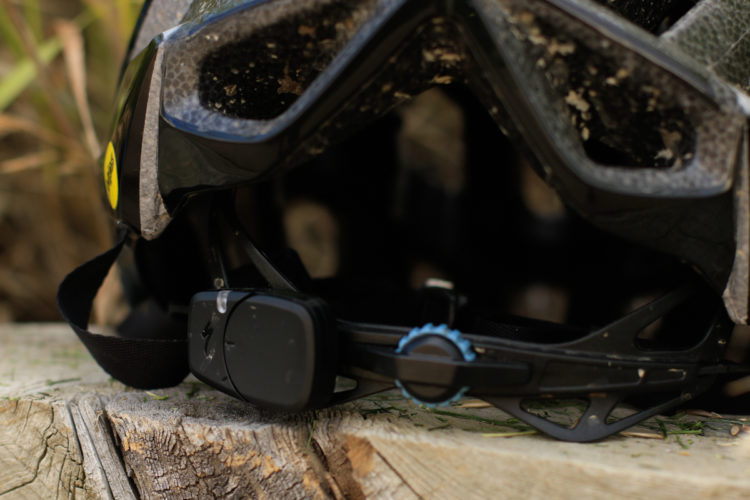 The ANGi sensor was developed by Specialized and is intended to be a guardian angel of sorts. ANGi pairs with your smartphone via Bluetooth, tracks your ride via GPS (and of course syncs with Strava), measures the force of an impact, and texts your location and an alert to emergency contacts plugged into the ANGi app if the user doesn’t respond to the app in time.

The ANGi sensor can be purchased separately for $50 and used with almost any helmet. It does require a few other things to work: ANGi must have a cell phone signal and must be paired with the rider’s phone. When the rider goes out of their estimated time frame they entered before departing on the ride and they don’t have cell phone service, there is still an alert sent to an emergency contact. 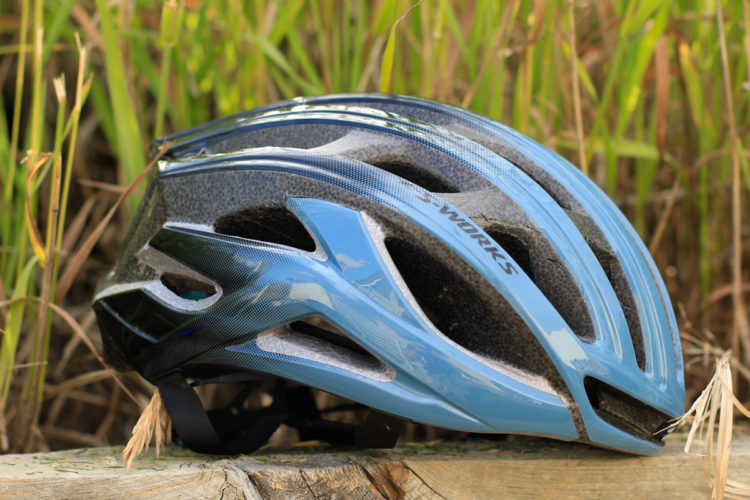 The rider also must have gone through the initial setup process via the Specialized Ride app and added their contacts. The purchase of the helmet includes a one-time activation fee and is free for the first year.

So while the ANGi is seemingly worth it in every sense, it does take a few extra steps and some work to make it part of a rider’s routine.

I have been wearing the Prevail and Propero on my cross-country ventures lately and the helmets have both performed admirably. For BC Bike Race either one would have been a great fit with their wraparound protection and large air intake vents.

The MIPS SL was developed for the S-Works Prevail for a lighter and more vented application and to give the S-Works branded product features that separate it from the pack. 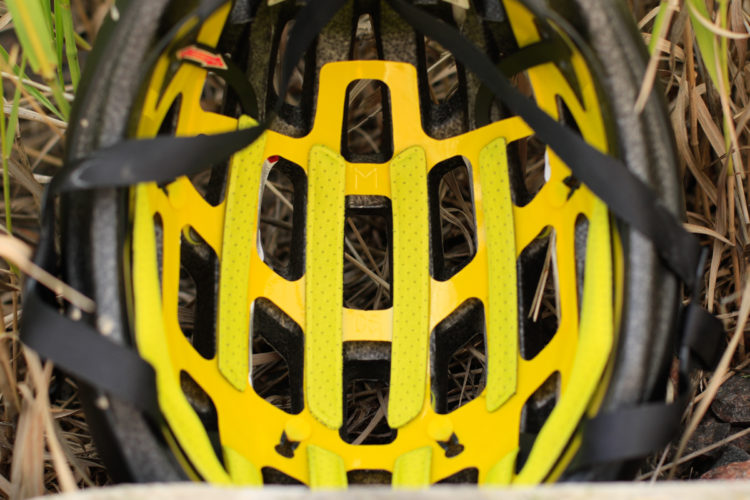 It is noticeably slimmer and neater than the MIPS liner in the Propero, but between the two, I couldn’t notice the difference in airflow. Both of the helmet’s four-step height position is easy to use and stays put regardless if you’re trying to move the helmet around on your head. Use the height position to adjust either helmet to your head height and the dial in the back for head circumference. 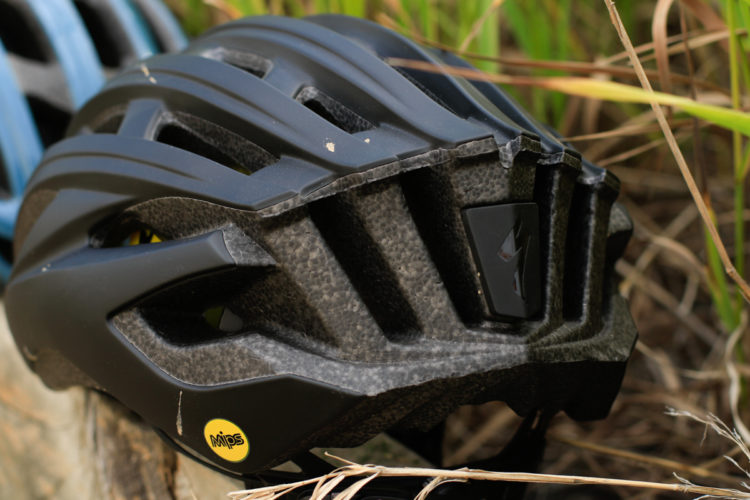 The Prevail is lighter than the Propero, but only by about 60g or two ounces, so switching between the two is hardly noticeable. Both feature the same strap material, which is light, and soft against the face, and cinched up both helmets stayed in place perfectly.

Neither helmet completely stopped sweat from pouring from my brow down toward my eyes and nose, but the horizontal vent brings a lot of air to the forehead to minimize sweat buildup and evaporate moisture. 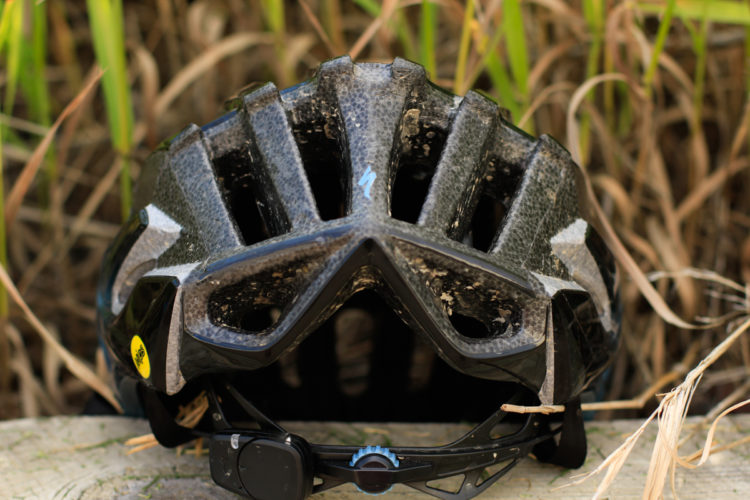 Both helmets also fit very similarly and are secure and snug. Through various rock gardens, jumps, and other bouncing around, neither felt like they were lifting up or off of my head.

Switching to one of these more slim helmets from a regular trail or enduro-intended helmet can make the rider wonder if they offer sufficient protection, but the Prevail and Propero both feel rock solid, cover the head well, and are comfortable for all-day riding.

The Propero III gives the S-Works Prevail II helmet a run for its money and it is really hard to notice a difference between the two. The Prevail is lighter and allows a touch more airflow, with an S badge and better aesthetics, but the Propero fulfills all the same functions for almost half the price. And that’s a solid sell.

Thanks to Specialized for providing these helmets for review.