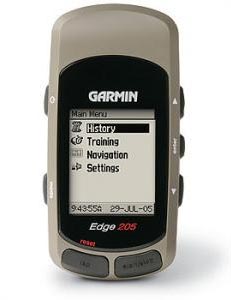 I got my first GPS receiver for Christmas in 2000 and since then I’ve purchased and tested a number of offerings from Garmin including the Vista, Forerunner, and now the Edge. After using the Garmin Edge 205 for a short afternoon I have to say this is easily my favorite GPS for mountain biking.

The first thing I noticed about the Edge 205 was its size– much thinner and lighter than the bulky eTrex series. The unit came with two bike mounts (you can configure the software to track multiple bikes as well) that secure to your stem or handlebars using two zip ties (no tools required). The default configuration is to mount the unit to your stem but I found that my stem is a bit too steep to get a good view of the screen while riding. I’m guessing this configuration is a bit more stable than handlebar mounting since your stem experiences less tilting while thrashing the trails. The Edge clips into the mount from the side which is also an improvement over the eTrex– no more popping out as you bomb down a rocky trail.

Out at the trail I immediately appreciated the improved battery configuration. The unit didn’t turn itself off once (a big problem with the eTrex series) even as I motored through rocky and rooty sections of singletrack trail. The built-in rechargeable battery keeps the unit small and tight though this can be somewhat limiting on longer or more remote rides with no access to a power source. You can recharge the batteries using the USB connection or included power cord, a nice feature for rides close to home.

Another huge improvement over the eTrex and Forerunner is the improved satellite antenna. The Edge never lost its signal even in densely forested terrain that previously caused problems for my eTrex Vista, though I suspect Garmin simply turned off the annoying “lost signal” messages. My map turned out great with little overlap even though the trail I rode (Lake Crabtree) is a tight network with plenty of doubling back.

The data screens on the Edge 205 are nicely simplified so you don’t spend lots of time scrolling between useless screens (like the compass screen on the eTrex). Sadly, though, the Edge 205 doesn’t give you an elevation plot screen, a HUGE disappointment and major oversight on Garmin’s part (the 305 gives you this screen but why should you have to pay an extra $100 to view data it’s already collecting?). You can view elevation data on your computer once you download the GPS data but it’s nice and often important to have access to altitude data on the trail. Adding waypoints on the go is a bit cumbersome but the large Start/Stop and Lap buttons on the top front of the unit are handy for managing trip data.

Garmin offers a PC and Mac OS X version of its Training Center software for the Edge and I’m truly impressed with the software (it is free after all). The maps have major highways built in so you can orient yourself and you can plot all kinds of data like elevation, heart rate, etc. (though you’ll need the 305 to track heart rate and cadence data). You can export your data in XML format but sadly it’s Garmin proprietary markup. Converting the data to GPX (a more standard format) requires the use of additional software, though I found GPS Visualizer’s online conversion utility worked fine. 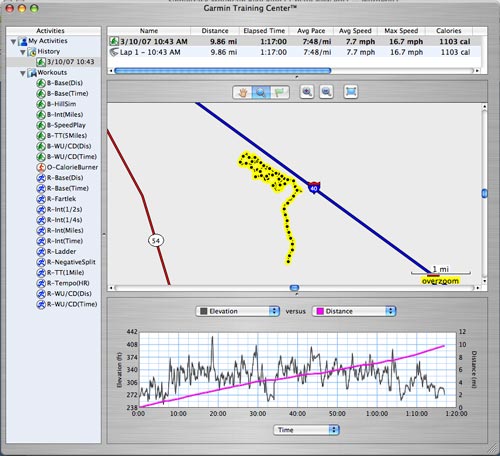 If you’re looking for a good GPS unit to take mountain biking, the Garmin Edge 205 is easily the best we’ve seen (though in the very near future we’ll probably upgrade to the 305). The improved satellite reception, small form factor, included software, and simplified interface make the Edge series the perfect replacement for your cycling computer or recreational GPS unit.

Note: I bought my Garmin Edge 205 on Amazon last week for around $120 which is a crazy deal (the MSRP is over $250). Get yours today while the deal lasts!

Good to hear a review of the Edge 205. I was seriously thinking about the Edge 305 (w/heartrate & cadence) last year but thought I would hold out until I decided if I really wanted to get that serious with training/racing.

My change in riding to more solo endurance adventure rides took me away from the Edge and to the Vista Cx. The expandability with the microSD card to not only hold topo base maps but very long track logs (in gpx format) was what sold me.

The Vista Cx still doesn’t do everything I want it to do, but the problems are mainly software oriented.

Here’s a lesson I learned about the Garmin Edge 205 today – it doesn’t turn itself off when you disconnect it from your computer. I drove all the way out to a trail I wanted to map today thinking the battery was full charged since it had been connected to the computer for about a day. When I went to turn it on – no juice.

Yep, the whole rechargeable battery feature is a double edged sword and I wish I had an alternate way to power the Edge when it’s empty. Maybe I need a backup Edge 😉 ? I at least plan on bringing the charger with me next time AND my power inverter so I can hook it up to the car for a quick charge. Lesson learned…

Ok, another problem with the 205 (though I still love it like my own child): No easy way to transfer GPX files TO the unit. I mentioned that you can convert the exported GPS data from the Edge to GPX format but I can’t figure out how to put that data back into the Edge. GPSBabel will convert from GPX to Training Center XML (TCX) but apparently there is a new (incompatible) version of TCX being used by the Edge 205. I’m sure GPSBabel will be updated to handle the new format but in the meantime, looks like we’re SOL…

[…] If you’re a regular reader of this blog you’ll remember that just 2 weeks ago I posted a glowing review of the Garmin Edge 205. I was so smitten, in fact, that I immediately decided I needed to buy the Garmin Edge 305 so I could experience the best of the best. This weekend I put the Edge 305 into action and I must say, I’m not sure the Edge 305 is worth the price, especially when compared to the svelte and economical Edge 205. […]

[…] I also got some good maps of Garner and Legend using my trusty Garmin Edge 205 and I’m pretty impresed with the reception given the cloud cover AND full leaf cover on the trails. I’m not as stoked about transferring and cleaning data FROM the Edge 205 though – it’s a huge pain in the ass. Those maps were numbers 198 and 199 in our GPS map collection – and number 200 was posted today! […]

Equipped with these GPS receivers, users can accurately locate where they are and easily navigate to where they want to go, whether walking, driving, flying, or boating….