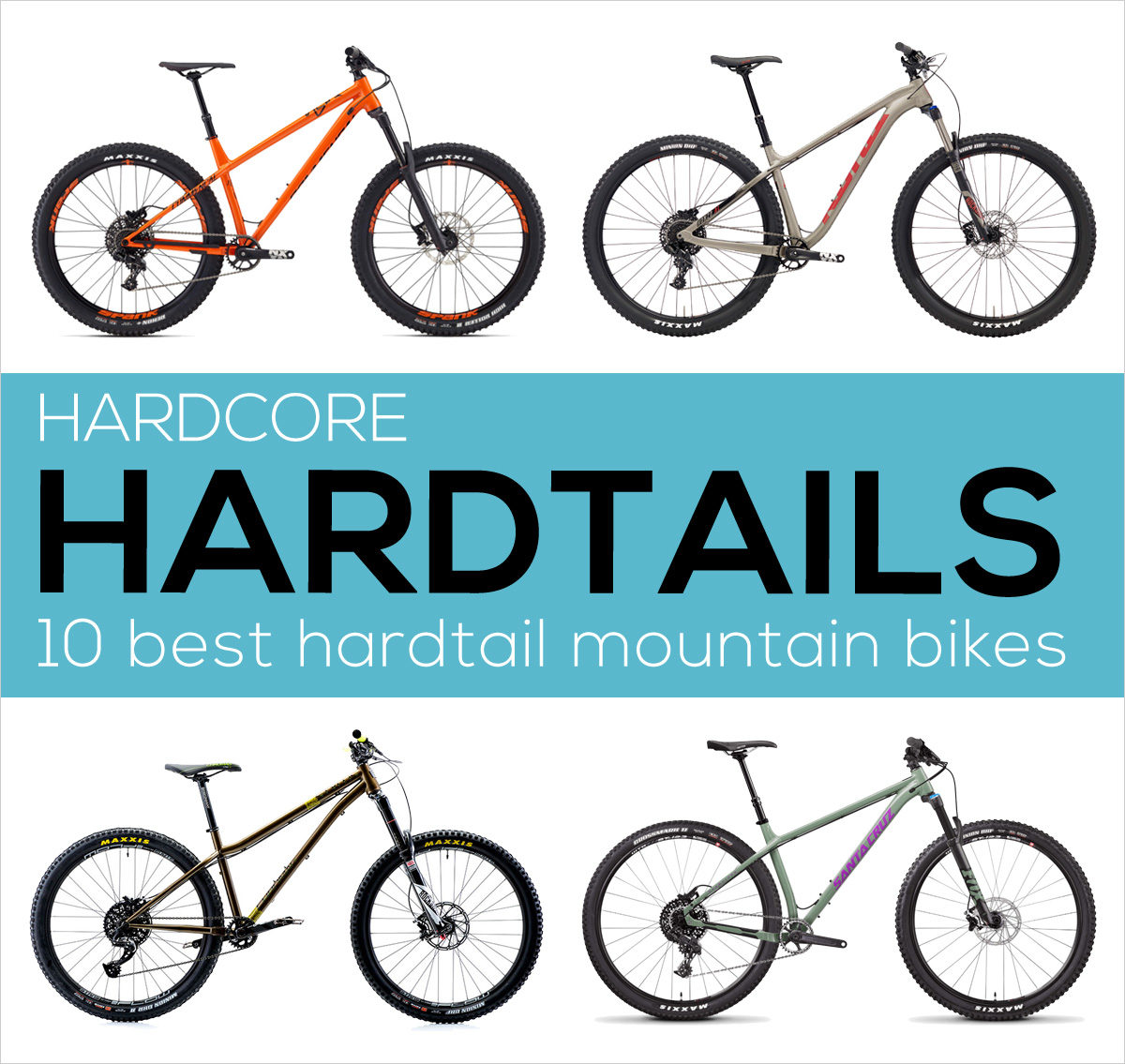 The typical mountain biker starts out riding on a hardtail. Often these bikes are entry-level or purchased secondhand. As a rider’s skills progress–or parts breaks–components get upgraded. But, almost inevitably, there comes a day when that rider outgrows their first bike. At that point, many can no longer resist the siren song of a full-squish bike. And once over the initial learning curve of a full suspension, not many ever return to riding hardtails.

However, hardtail mountain bikes aren’t just for beginners. In fact, the humble hardtail has continued to evolve right along side its squishier counterparts. Head tubes have gotten slacker, chainstays have gotten shorter, top tubes are longer, stand over heights have been lowered, and features like dropper post routing have been added.

Personally, I’m a huge fan of hardtails. If you’re on a tight budget and can afford only one bike, a hardtail is going to allow you to get much better components over a similarly-priced full suspension bike. Assuming you’re fortunate enough to have multiple bikes, a hardtail is a great companion to a full squish. By nature, hardtails are simple machines. There’s less to break or to maintain. They’re also great for keeping your skills honed. Full suspension bikes allow for a wider margin of error, which can lead to slacking off on fundamentals, such as line choice. If it has been a while since you hopped on a hardtail, give it a try. I bet you will immediately notice things you could do to improve your riding.

So, if you’re looking to upgrade from your entry-level ride, or you want to supplement your current stable, here are the 10 best hardcore hardtails made for rowdy riding.

The Canfield Brothers actually have three rowdy hardtails in their line. In fact, they claim to be the first company to apply modern all-mountain geometry to a 29er hardtail, with the Yelli Screamy in 2011. I chose to highlight the Nimble 9 over the aluminum Yelli Screamy and the carbon EPO for a couple reasons. First off, the Nimble 9 frame is made from steel, the most classic of all materials. Secondly, it uses sliding drop outs, which means you can run it either geared or as a singlespeed, making it more versatile than their other frames. Finally, I think it’s the best-looking hardtail they make.

For 2017, the Brothers have updated the Nimble 9 with Boost 148 rear hub spacing. Other highlights include: stealth dropper routing; gearing options of singlespeed, 1x, or 2x; clearance for 2.5″-wide tires; and a chainstay length of 16.25″ in the shortest setting.

Chromag is all about hardtails. Currently, they offer eight different frames covering everything from dirt jumpers to fat bikes. Chromag classifies the Stylus as their freeride/trail/jump bike, and it’s been in their line for years. It recently received a bump up in wheel size to 27.5″ from 26″ in keeping with industry trends.

Having owned a 26″ version myself, I can attest that the chromoly Stylus is built like a brick shithouse in a bad neighborhood. If ride quality is your major concern in a frame, this ain’t the bike you should be looking at. But, if you’re like me and have a knack for breaking things, this could be your ideal companion. Designed with a 160mm fork in mind, the Stylus can take whatever you can dish out.

Commencal is known for their smartly-designed and spec’d bikes that are offered at prices real people can afford. They’re able to do this through their direct to consumer sales model. Our own Chris Daniels enjoyed his time on this bike’s full-suspension sibling so much that he decided to buy it. The META HT AM Race model shown above is their top offering, but you can find the META HT AM ORIGIN complete bike on sale for only $849 at Commencal website.

For $1999, you’re getting a killer build, including a 160mm Rockshox Lyrik fork, KS Lev Integra Dropper, SRAM Level brakes, and a Ride Alpha cockpit. The META HT’s geometry is made for going fast and big–despite the lack of a rear shock–with a 65-degree head tube angle, 16.5″ chainstays, and a healthy reach across sizes.

The Kona Honzo is another bike that gives you plenty of options. You have your choice of frame material in either aluminum, steel, and carbon! The aluminum-framed Honzo is sold as a complete bike in five builds with either 29 or 27.5+ wheel options, price ranges from $1,399-$2,399. If you want steel ($550 in 2017), you’ll have to pick your own parts since the Honzo ST is available as a frame-only.

Personally, I would go for the steel frame since it’s affordable and it gives you the option to run the bike as a singlespeed.

The Honzo is designed around a 120mm fork with a 68-degree head tube angle. What really sets the Honzo’s geometry apart from other bikes is Kona’s belief in a looooooooong reach. A size-large frame has a reach of 475mm, significantly longer than the other bikes on this list. Basically, the Honzo is the hardtail version of their acclaimed Process line of full-squishers. I, for one, am a big fan of Kona’s roomy top tubes, stubby stems, and wide bars.

Niner is another company with several hardtails in their line. For a long time, most of them were XC-focused, but that changed when Niner released the ROS 9 a couple years ago. It’s unapologetically a trail smasher, and like most on this list, it’s versatile.

The ROS 9 can run either a 120mm or 140mm fork, depending on your preference. It utilizes Niner’s BioCentric II bottom bracket, which gives you the ability to run it singlespeed, or to adjust the chainstay length (16.5″-16.7″) and bottom bracket height.

It can accommodate a dropper post routed externally or internally and a front derailleur. Should you choose to go with a single gear, you can remove the cable guides for a tidy appearance.

When I first saw the Torrent in Norco’s booth at Interbike, I was like, “Daaaaaaaamn!”

The spec, design, paint, price point, and stance combined to create an all-mountain hardtail that ticks all the right boxes. Chris Daniels was lucky enough to test the Torrent 7.1, and he was swooning over the plus-sized shredder as hard as I was.

As I found during my recent test of the Revolver, Norco really knows how to spec a bike. Highlights on the Torrent include the 140mm DVO Diamond (think of it as a less expensive Pike), a SRAM GX 1×11 drivetrain, and a TransX stealth dropper post.

On the geometry front, the Torrent has a slack, 66.5-degree head tube angle, a decently-long reach, and a low bottom bracket. Interestingly, Norco takes their Gravity Tune concept from their full-suspension line and applies it here. As frame size grows, the chain stays lengthen in an effort to keep the rider centered on the bike. Because of this, chain stay measurements range from 16.5″ on the small to 16.8″ for the extra large.

The On-One 456 hardtail has been around for seemingly forever. Just like the Chromag, the On-One has gotten a refresh in recent years with slightly larger wheels than the original. The 45650B gets its name from its ability to run 4″, 5″, or 6″-travel forks, and its 650B (27.5″) wheels.

With On-One’s reputation for building affordable bikes, it’s not surprising to see a lot of value packed into the latest generation. Currently the 4560B hardtails are only available with titanium frame on the On-One website. The Ti bike comes with a 120mm RockShox Reba Solo SL Air, a SRAM NX1 drivetrain, and i25 EL Guapo Wheelset. It’s very competitive with the Commencal, although the build is not quite as burly.

In terms of geometry, the 45650B is super slack with a 65.7-degree head tube angle. The chainstays are short, but not incredibly so, at 17″. If you like a long reach, this isn’t the bike for you, as the measurements here are substantially shorter than the others.

Santa Cruz aptly named this affordable hardtail the Chameleon because of the numerous ways it can be built up. Originally a 26er, the Chameleon has been upsized to interchangable 27.5″ or 29″ wheels.  I’ve had friends build them up with short-travel forks and light parts, as singlespeeds, and as burly all-mountain bikes.

With a 120mm fork, which Santa Cruz specs on the complete bikes, the head tube angle sits at 67.3 degrees (29er wheels). Obviously, going with a longer-travel fork will make the bike slacker. The chainstays are 16.5″ across all frame sizes.

At $749 for the frame, this is the least expensive way to get your butt on a Santa Cruz. Both of the complete builds use trail-worthy components like Rockshox Recon RL or Fox Rhythm 34 forks and SRAM NX1x11 drivetrain.

Being a rider-owned company, Transition only makes the bikes that they’d actually want to ride. Their line is full of all sorts of rad trail and big hit bikes, but you’re out of luck if you want an XC race bike from them. The closest thing to XC you’ll find from Transition is their Vanquish, a 29″ carbon hardtail descended from the brand’s popular TransAM 29 model.

Last–but certainly not least–on this list is the Zen TRAIL. Be sure to check out my full review of the bike from last year, but the tl/dr version is: it’s my favorite hardtail ever. It’s got a great ride quality, is reasonably light, has near-perfect geometry, and is built in Portland, OR.

It’s available only as a frame, so you’re on your own to build it up. I was able to get mine to around 25lb without trying very hard. With lighter parts, you could easily get it down to 23lb.

There’s nothing crazy in the geometry, but it works. With a 120mm fork, which the TRAIL was designed around, the head tube angle is 68 degrees. The chainstays are short at 16.9″, which tucks the rear wheel in close. Like many others on this list, there’s no provision for a front derailleur. As I mentioned in my review, it lacks adjustable dropouts for singlespeed use–one of the bike’s only drawbacks.

Your turn: Which one would you pick? Which ones did we miss? Continue the discussion below!

Gear
What is 'Too Heavy' for a Mountain Bike?
Videos
Enduro Racing from a Photographer's Eyes [video]
Opinion
One Less Mountain Bike: A Tale of Too Many Stolen...
Trails
Crushed by Crosier: Searching for Singletrack in Estes Park, Colorado