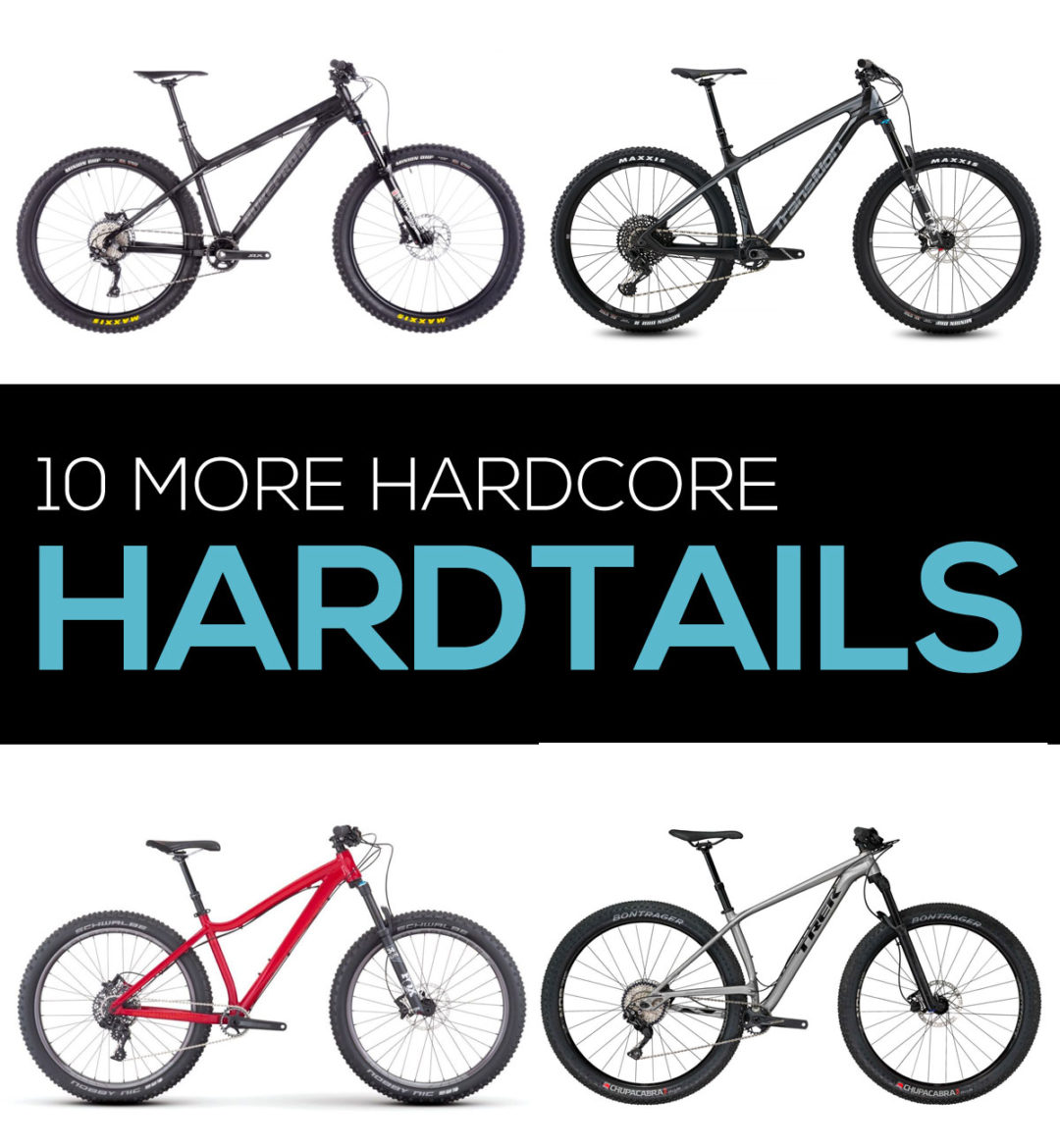 You could say hardtails are making a comeback, but to a large group of devoted fans, they never went away. When you get down to brass tacks, it’s not hard to see why hardtails still have a passionate following.

Given identical components, a hardtail version will almost always be cheaper than its full-suspension counterpart. As a result, they make great entry-level bikes, but they can also stretch an advanced rider’s dollar further. Instead of paying for a rear shock and complex linkages (and the patents that protect them), hardtails leave riders with change to spare on carbon wheels, a nicer drivetrain, or a better fork.

All those pivot points on a full-suspension model will wear out eventually, and – in theory – you’re supposed to service that rear shock every 100 hours or so. For some riders I know that would amount to a monthly service interval. And riders can forget adjusting that rear shock for high-speed compression, damping, and rebound. Hardtail riders just ride.

You’ll never have to worry about battling pedal bob on long climbs. Hardtails transfer virtually all the power to the wheel. It can be a liberating feeling to stand up and hammer away.

There are other advantages too. Full-suspension bikes smooth out lines, and the rear shock will occasionally enable riders to write speed checks their riding ability can’t quite cash. A hardtail keeps mountain bikers honest, and given the chance, it will teach the rider a lot about mountain biking.

With a nod toward this original list of 10 Hardcore Hardtails, here are 10 more bikes that encourage riders to turn the shred dial to 11 without the “inconvenience” of a rear shock.

No list of hardtails would be complete without an offering from the company that still hasn’t come to grips with the rear shock. All Chromag bikes are beautiful, but the Surface belongs on this list thanks to its ample 150mm fork and 66-degree head tube angle. The bike also has a long wheelbase of 1,218mm for the size large, and the frame can fit plus-sized 27.5” tires or narrower, standard 29er tires.

The Surface costs a pretty penny, and $1,650 doesn’t buy any parts besides the steel frame. If you’re going all-in, $4,250 will have you riding away on GX Eagle, while $5,150 gets you the same bird in X01 along with slightly nicer Guide RSC brakes.

Diamondback’s Mason Pro may have a moderately steep 68-degree head tube angle, but the 130mm fork and 2.8” tires make it clear this bike is meant to be ridden hard. The inclusion of a KS LEV Integra Dropper is a nice touch for varied terrain, and the 1×11 drivetrain keeps the focus on simplicity.

While the Mason Pro isn’t like to win any cross-country races (or beauty pageants, in my humble opinion), the attractive price point and capable components make it a great first bike —  or a second or third for someone wanting to diversify their stable.

If custom colors are a high priority for your next hardtail, the Yo Eddy 2.2 from legendary bike company Fat Chance won’t disappoint. The 2.2 is a remake of an 80’s classic, and the eye-popping color schemes are far more than a detail. Solid color frames start at $1,799, but custom paint options abound, and the sky is the limit.

The Yo Eddy can accommodate either 27.5- or 29-inch wheels, and while the 68.5-degree head tube angle is one of the steepest on the list, it’s measured with a 120mm fork. The frame is designed to accommodate up to 140mm of travel up front, so riders looking to shred hard will enjoy extra squish and a slacker ride. The classic bike has also been updated with a Boost rear axle, and for those who like options, Fat Chance offers build kits ranging from entry-level to high-end.

Does your bike have a bottle opener built into the frame? I think not. Unless of course it’s a Guerrilla Gravity Pedalhead. Other nice details include a slack 65.5 degree head tube angle, room for 140mm of front squish, and clearance for either 27.5+ or 29er wheels.

The Pedalhead is offered in several different builds, starting at $2,195 for the base model all the way up to $3,995 for the race version. With the latter coming in at an estimated 26.8 pounds (the frame alone is 6 of those), this bike probably isn’t getting you on the podium at an elite cross-country event. Fortunately, it was never meant to. Instead, the Pedalhead is for shredding up, shredding down, and then reliving those moments while cracking a beer back at the parking lot. 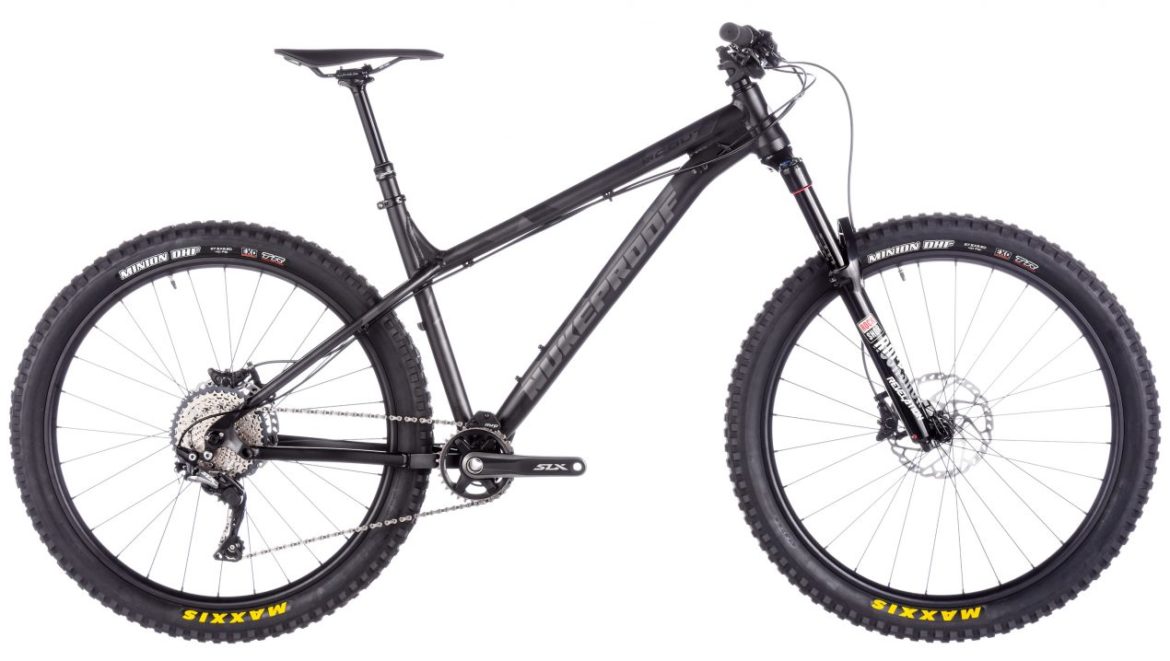 The 140mm fork and the super slack 65-degree head tube angle on the Nukeproof Scout leave no doubt as to this bike’s ill intentions. Throw in a Boost rear axle and you’ve got clearance for burly 2.8” tires – even wider than the 2.6” Maxxis DHF’s that the Comp model is specced with.

The Orange Crush is another exciting hardtail from the Brits built around 27.5” wheels. By moving to Boost spacing for 2018, the Crush is equipped to handle a 2.6” tire, and the 65-degree head angle offers geometry to match the 150mm fork.

The Crush also comes in at a reasonable £500 for the frame and just £1,550 for a complete bike specced with an SLX 1×11 drivetrain. Despite being made “across the pond,” Orange bikes have a dealer in Wisconsin, so they should be slightly easier to come by than Trillion’s Prime.

Of all the bikes readers felt the original hardcore hardtails list overlooked, the Production Privée Shan received the most clamor. While the French company sells frame kits for just 465€, readers in the U.S. should be prepared to spend another 135€ on shipping. The good news is, it’s probably worth it.

The Shan is designed for 27.5” wheels (although it can be adapted to 26”) and a fork with a healthy 140-160mm of travel. A 150mm fork yields a very slack 65.5-degree head tube angle, and the large frame’s 1169mm wheelbase is planted firmly in trail bike territory. Internal routing options, single-speed compatibility, and superb aesthetics round out this tempting offering from the French boutique brand.

In a list that seems to be made entirely of steel, Transition’s carbon frame Throttle feels almost out of place. That is, until you consider the material’s merits. At 1,400 grams, this frame is just over half the weight of many of its  steel-framed competitors above. Whether you’re climbing a never-ending gravel road to the top or throwing your bike through corners and over jumps, weight matters, and even the middle-of-the-road GX Eagle build comes in at a scant 25.2 pounds.

But make no mistake – this bike certainly can be raced cross-country, but its 66-degree head angle and long, 1173mm wheelbase (size large) suggest a different purpose entirely. Add in a capable 140mm fork, and you have an aggressive hardtail that’s not backing down from too many trail features.

Plenty of the bikes on this list support 29” wheels, but usually at the cost of all that plus-bike traction. With Trek’s Stache, riders aren’t forced to make such agonizing decisions. Instead, you get a 29er riding on big ol’ 3” wide tires with 120mm of travel to boot.

The Trillion Prime is a British-built, long-travel hardtail that looks like it eats downhill runs for lunch. The durable steel frame will take whatever burly hits the 160mm fork can’t manage to soak up, and the long 1,220mm+ wheelbase (size large) and slack 65-degree head tube angle encourage riders to point this mean machine downhill.

Although not technically available to our dear readers in the U.S., if you want it bad enough I trust you’ll find a way. In addition to the attractive simplicity of the frame, the production team in Livingston, Scotland is capable of cranking out some drool-inducing custom paint jobs.

Mountain bikes are evolving, and fortunately, hardtails aren’t being left behind. Updated trail geometry that emphasizes the long, low, and slack will no doubt keep fans of the hardtail coming back, while seasoned innovations such as dropper posts and more recent advances like plus tires and 1x drivetrains make what’s already good even better. If it’s been a while since you’ve been on a hardtail, it might be time to get back to your roots – or plant new ones.

The Surface is sweet (and can be had in Ti), but Chromag also do the Rootdown BA and it’s handmade-in-Canada brother the Primer. They’re even more progressive: 29er or 27+ with 65-degree HA and 75-degree SA with a 160mm Lyric, 415mm chainstay – they rip!

You should check out the Pipedream Moxie. I have one and it’s incredible. I am riding it here on Vancouver Island more than my Knolly Endorphin, yes it is that much fun.

I have been looking to build a bike up from the frame. Waiting on On*One to get the Deedar back in stock. My only concern is it is very slack (I think 65.5). I know that is steeper than a FS with the same HT angle because only the front will be sagged. But the reality is I live in Ohio and would trade quicker steering for less downhill performance.

Does anyone have any suggestions for a frame with a bit steeper HT angle? Steel with through-axle would be my first choice. Ideal price range is $300-$400. Thanks in advance.

@vapidoscar562: The Kona Honzo is one of the OG’s in this category and the 2015 on steel models are likely exactly what you are looking for. You can a used Honzo steel frame for that cost with some research. The ’12-14 models are also good, but the geometry is better on the later models. That said, I don’t think the slacker head angle would be a deal breaker and you might actually really like it. Case in point, Honzo’s come with a 68 degree head angle/120mm travel fork and I immediately threw a 140mm fork on mine. It rides much better and I believe I could run up to a 160mm fork without any issues.

Shouldn’t the $1k Salsa Timberjack be on this list?

Cool list. I like to ride hard tail myself, on fast twisty trails or gravel roads. Sometimes on very rough trails. There’s a unique feel when riding hard tail.
However when terrain becomes seriously rough it’s full-suspension territory. It’s faster, comfier and I feel fresh and ready to ride next day thanks to that rear shock and linkage that was serviced only once 4 years ago.
Prices on some of these bikes are way too much. $4-5k for steel hard tail?! This is how much full suspension cost.

One other model that I feel should be considered is the “GT Pantera”. 3 different builds, Modern trail geometry w/tapered head tube, 27.5+ tires, good suspension & either 2 x 9 or a 1x drivetrain. The sport retails at $750 but can be had for much less. I had my sport 27.5+ delivered for under $400. Probably one of best bikes in its price range. It rides great & I am very happy with the performance Igor for the $$$. A bit heavy, but that’s the trade off for lower dollars I guess. Amazing value on a solid bike that I feel is worth upgrading down the road as my skills improve.

For another option, the Rocky Mountain Growler has great price points across all specs. And it’s a solid platform to build a custom spec off of, which is exactly what I did.

If you want more info, check out my Rocky Mountain Growler Review.

and the canyon stoic?