Over the past year and a half, Niner has been busy… really busy! They have launched entirely new models and redesigned basically every bike in their line. One of the bikes to get a refresh is their long-standing race hardtail, the Air 9 RDO.

The updated Air 9 is a looker. Niner flattened the profile of the tubes which makes for a sleeker-looking frame. The Air 9 is one of those bikes that just looks fast, even standing still. The head tube blends seamlessly into the top tube and creates a subtle arc that continues into the chainstays. Niner offers the Air 9 in two colorways: a racy red and black, along with a ’90s-inspired CMYK – which I opted for. The frame has accents of cyan (C), magenta (M), and yellow (Y), but is mostly black (K). In the fast-changing world of mountain bike fashion, it is hard to say how this color will age, but for now, I think it looks cool as shit.

Niner did tweak the geometry a bit compared to the previous generation of the Air 9, but there aren’t any crazy differences. After all, it is a hardtail race bike. Most notably, the chainstays were trimmed down 4mm to 435mm overall. The head tube is one degree slacker, down to 70-degrees with a 100mm fork, or 69-degrees with a 120mm fork. Boost spacing (148×12) was used on the rear of the frame in keeping with the times.

Other notable frame highlights include internal cable routing, Di2 compatibility, and the ability to run singlespeed. To do so, you will need to purchase Niner’s BioCentric bottom bracket cups for proper chain tension. Niner also touts internal dropper post routing on the frame, although with a 27.2 post size, your options will be limited.

Niner sent me a size large frame with their 3-Star XT build. However, since receiving the bike, Niner has revised their build kits. Because of this, the build I have is sort of between their 3- and 4-Star builds. So, how about we call it a 3.5-Star? Originally, the bike I rode retailed for $4,500, which I thought was on the high side – I will get into the why later. The new 3-Star build goes for $4,000 while the updated 4-Star rings in at $5,500.

My bike was spec’d with a full Shimano XT 1×11 drivetrain. Shimano supplied the cranks, shifter, derailleur, and cassette, as well as the brakes and rotors (180mm front, 160mm rear). Suspension duties were handled by a top-drawer Fox 32 Factory with their FIT4 damper and Boost spacing. Wheels were a Stan’s Arch EX set, wrapped with trail-worthy Maxxis Ikon tubeless tires (2.35″ front, 2.20″ rear). The remaining components all came from Niner, including a carbon post, carbon bar, alloy stem, and saddle.

Out of the box this bike is ready to race, coming in at just 22 pounds. The spec on the bike was impeccable, especially with regards to the tires. Too often, manufacturers skimp on tires to either cut costs or to get weights down. Niner opted to spec Maxxis’ Ikon tires that have all the bells and whistles you could hope for: tubeless ready casing, EXO sidewall protection, and 3C triple rubber compound. Not only that, they went with the larger 2.35″ Ikon in the front to provide more traction and comfort. This is how a real-life racer would spec their bike, and I appreciate Niner’s attention to detail.

While I think the spec is great, I did think the price was a touch on the high side considering the midrange Stan’s wheels and abundance of Niner components. No doubt the frame and fork were top-notch, but for $4,500, I expected to see a nicer wheelset. It appears Niner came to the same conclusion with the revised builds. Now, the 3-Star build costs $500 less, but also gets a step down in the fork department to a RockShox Reba. The $5,500 4-Star build gets the same Fox fork and XT group I rode, but adds Niner carbon rims laced to DT Swiss hubs. The new price points are more in line with what I would expect to pay.

After experiencing the buttery goodness that is the Fox Factory fork, I would have a hard time bumping down to the Reba. However, if you are super picky about your parts, you can always purchase the frame alone ($2,000) and build it up any way you see fit. 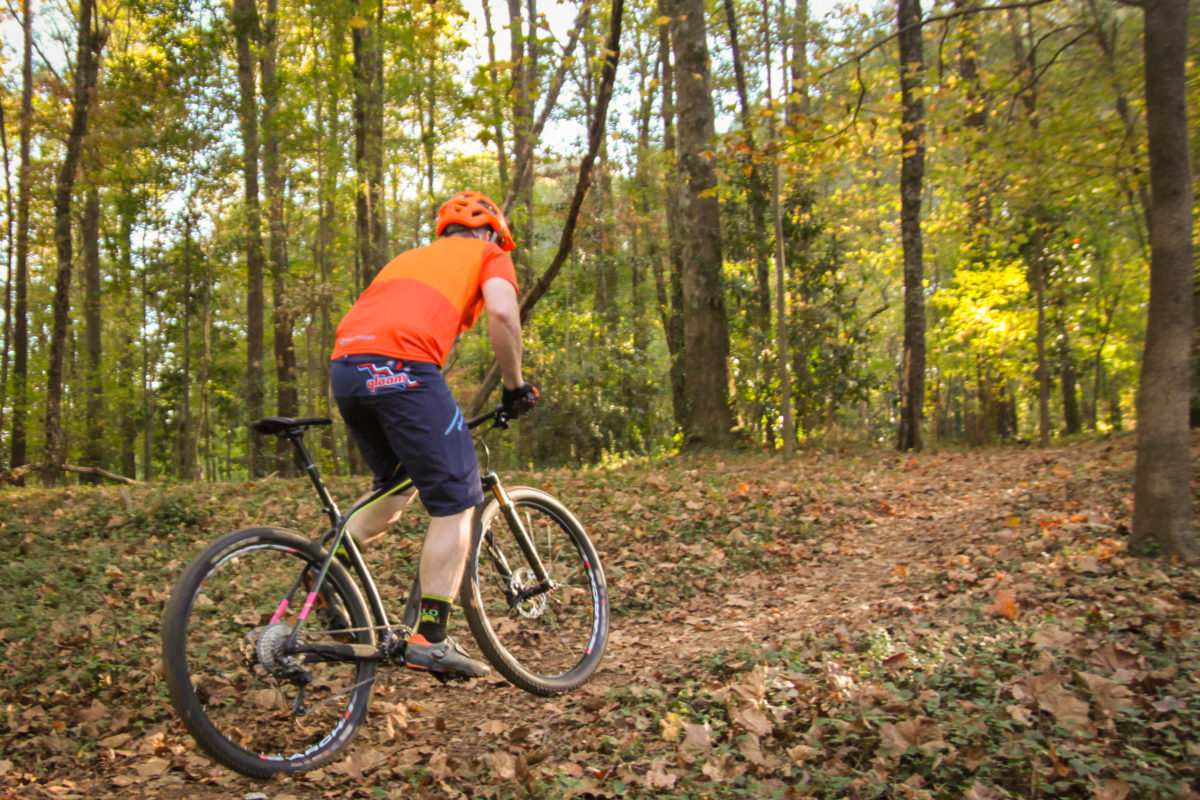 Fast. Light. Stiff. Did I say fast already? Seriously, it is a carbon hardtail after all.

Apart from fast, I found the Niner Air 9 to be supremely comfortable. I am not sure what magic Niner worked into the frame, but it manages to be stiff without beating the shit out of you. Right away I could take the Niner out on 3+ hour rides with no discomfort. Sometimes with a race bike, you have to acclimate to the aggressive riding position and rigid frame. That was not the case here.

Partial credit for the comfort likely goes to the 27.2 carbon post. However, as mentioned above, the smaller diameter is going to limit your choice of dropper posts. This is especially true since there is no option for external routing. You would have to zip the remote housing to the frame – an unthinkable option for a bike this pretty. A 30.9 or 31.6 diameter post would give the rider almost limitless dropper options, but would create a harsher ride for those on a rigid post. I can understand Niner’s decision since this is first and foremost a race bike. 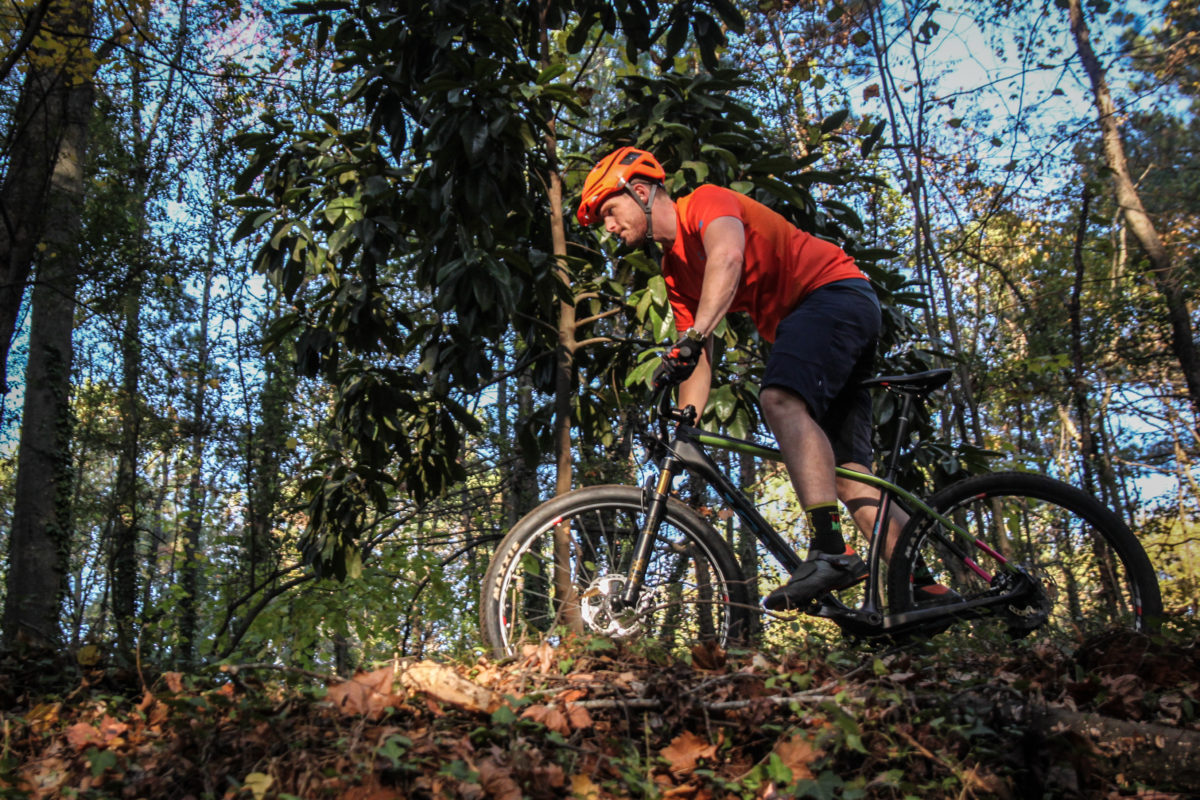 The stock stem was on the long side for my personal tastes at 90mm, but even so, the neon speed machine could slice through twisty trails with ease. Eventually, I did swap the stem out for a 70mm which helped me get farther behind the saddle on descents.

Speaking of descending, this bike is surprisingly capable for a hardtail with a 100mm fork. Fox’s new forks are simply fantastic – the travel is controlled but plush. The 32mm stanchions look tiny after riding burlier trail forks, but flex was not an issue for me, even when charging through rough sections.

Niner claims they could have shortened the chainstays further, but did not want to sacrifice high speed handling. At speed, the bike felt stable and easily held its line, so I would say Niner achieved that goal. The Shimano XT brakes provided more than enough power to rein in the speed of the featherweight bike.

As for climbing, it is a 22 pound carbon fiber hardtail. How do you think it climbed? Needless to say, it was never the bike holding me back on a climb. Smooth climbs and gravel roads were easily devoured, particularly if they were long enough to warrant locking out the fork. Technical climbs required more momentum, which was easy to achieve on such a light bike. In spots where I did get caught track-standing, all that was required was a sharp jab at the pedals to get moving again.

I have little to pick at on this bike, which is rare for me. There are two things I would note though. One, the feel at the shifter lever was too firm. Shimano’s 11-speed XT group seems like it is on just about every bike out there, including numerous bikes I have tested. The lever feel has varied from light and fast to heavy and slow. Unfortunately, this bike skewed to the latter.

My only other quibble was an occasional creak coming from the head tube. I tried removing the fork to clean and grease the headset, but I could never fully get rid of the noise. Not surprisingly, it was more pronounced during intense efforts – such as climbing while standing – but it could also be heard just cruising along smooth trail. 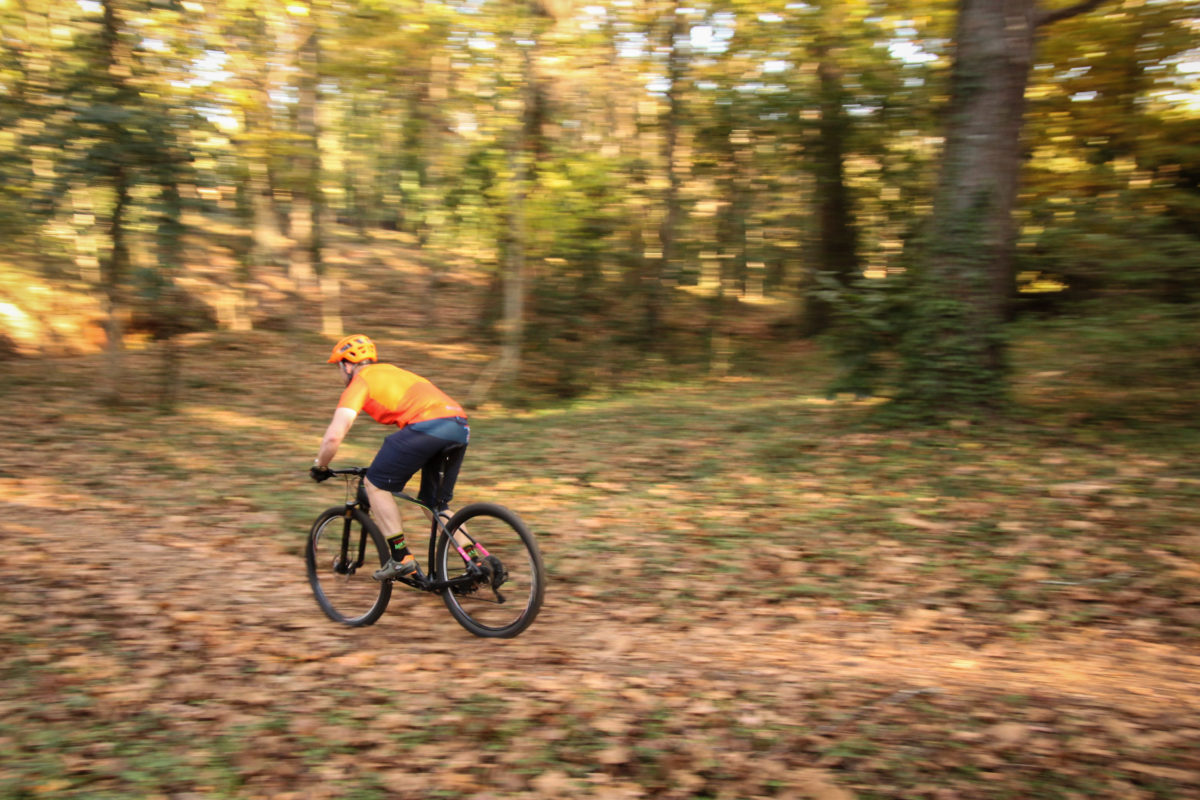 If you are looking for a no-compromise race bike, the new Air 9 RDO most certainly fits the bill. The frame is stiff and light, but also comfortable – making it suitable for classic XC races as well as longer marathon events. If your idea of fun is putting the smack down on your friends or fellow racers, this could be your bike. Slap a 120mm fork on the front, find a 27.2 internal dropper, and you would have a stupid light, but stupid capable trail hardtail. And, think how light it would be with just one gear!