Transition was another company that had empty racks for much of the Outdoor Demo. One guy I talked to on the shuttle truck said he was there just to ride the Patrol, and had already been on three trips to the top. Towards the end of the day on Tuesday, I went by the booth and Transition had several bikes in, but they were in the process of shutting things down. I tried my best to get teary-eyed, and the crew at Transition was swayed by my Oscar-worthy acting.

They set me up on the Patrol 2, a 160mm front/155mm rear travel trail bike. The build on the $5,000 bike is primarily SRAM and RockShox, which seemed to be dominating the OE-spec at this year’s show. The top level RCT3 Pike is up front, a Monarch Plus Debonair takes up the rear, SRAM X1 and X01 covers the shifty bits, Guide brakes slow you down, and RaceFace gets in on the action covering the cranks, bar, and stem. A KS LEV Integra dropper with a Southpaw remote gets the ANVL saddle out of your way. The wheels feature some basic-looking SRAM hubs, but use Easton’s new 27.5″ AR30 rims. I’m guessing they’re not the lightest wheels, but they look like they can take some abuse.

In a bit of good news for home mechanics, Transition uses a threaded 73mm bottom bracket. For those that get really rowdy or just want a bit of extra security, the frame features ISCG05 chainguide mounts. Even though all complete builds of the Patrol come with one-by drivetrains, there is a spot to mount a front derailleur in case you want to add another chainring.

Since the day was winding down, I didn’t venture all the way to the top of the mountain. Instead, I stuck to the Mother -> IMBA -> P.O.W. -> Par None loop that was closer to the venue. Like the Giant Reign I tested earlier in the day, I immediately felt comfortable on the Patrol. Once again comparing the geo charts to my beloved Kona Process 153, they are very similar. At 65 degrees, the Patrol has the same head tube angle as the Reign, which is 1.5 degrees slacker than the Process. Both the chain stay length (430mm) and wheelbase (1210mm) on the Patrol fall squarely in between the Process (425mm/1190mm) and the Reign (434mm/1217mm). *All measurements are for a large size frame.

Too many numbers? You just need to know that the geometry is near the current outer limits of low, long, and slack.

The Patrol looks like a big bike on paper, but it feels much more nimble on the trail. Transition has transitioned from a single-pivot suspension design to a Horst Link since the recent expiration of the patent. In classic Transition tongue-in-cheek humor, they named their new design Giddy Up. They claim that the design doesn’t need increased compression damping from the rear shock, but instead works best with shocks in the open position. Even though my ride was brief, I’d have to agree. Stomping on the pedals propelled the bike forward without wallowing in its travel.

I only encountered a few chunky sections on my quick loop, but the Patrol was competent in the rough. It’s definitely a bike I’d like to spend more time on. The best way I can describe the Patrol is to say it’s a better-pedaling version of my Process.

For fans of the fantastic plastic, Transition will have a carbon fiber version of the Patrol available soon. The aluminum bike currently comes as a frame and shock for $2,000, or in complete builds ranging from $3,000 to $6,400. 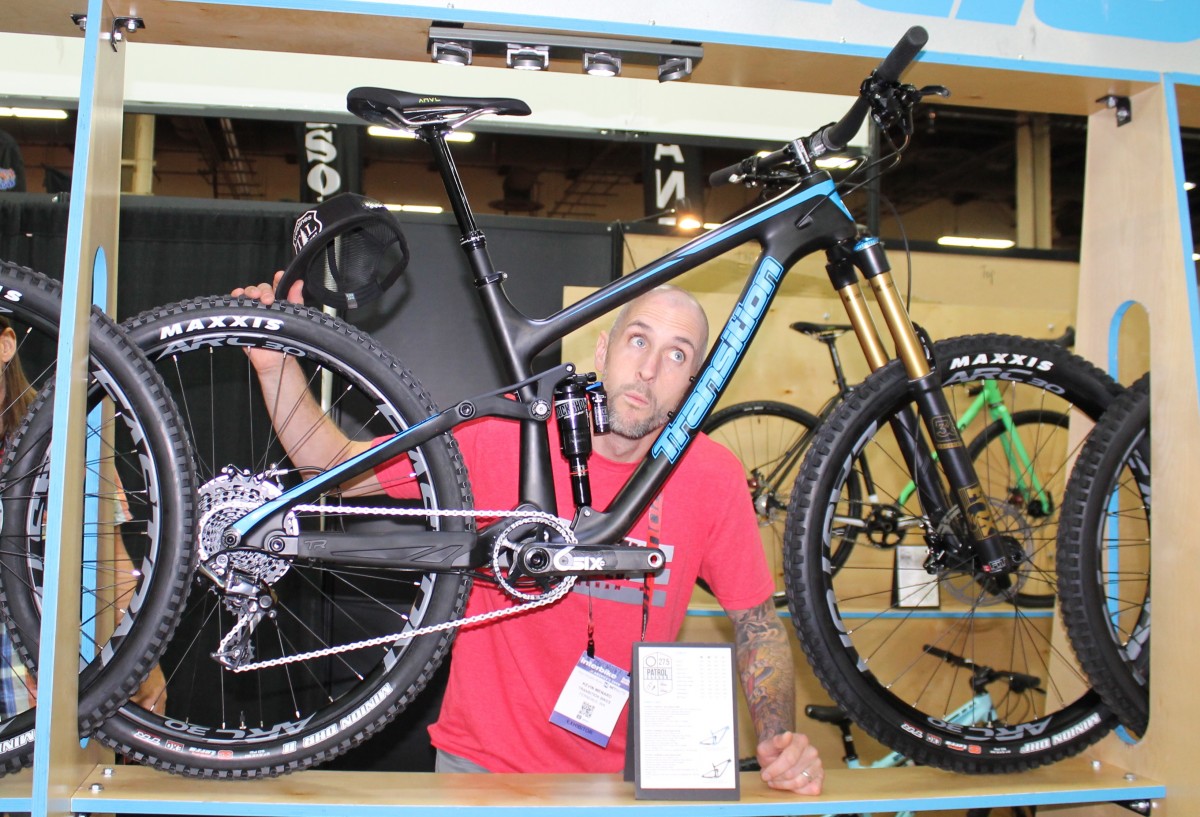