After riding the Turner King Khan at Outerbike last year, I instantly became a fan of dual suspension fat bikes. Interestingly, the number of fully-suspended fatties hasn’t really expanded since that time, but a slightly-updated version of the Salsa Bucksaw was announced last November: the Bucksaw Carbon. 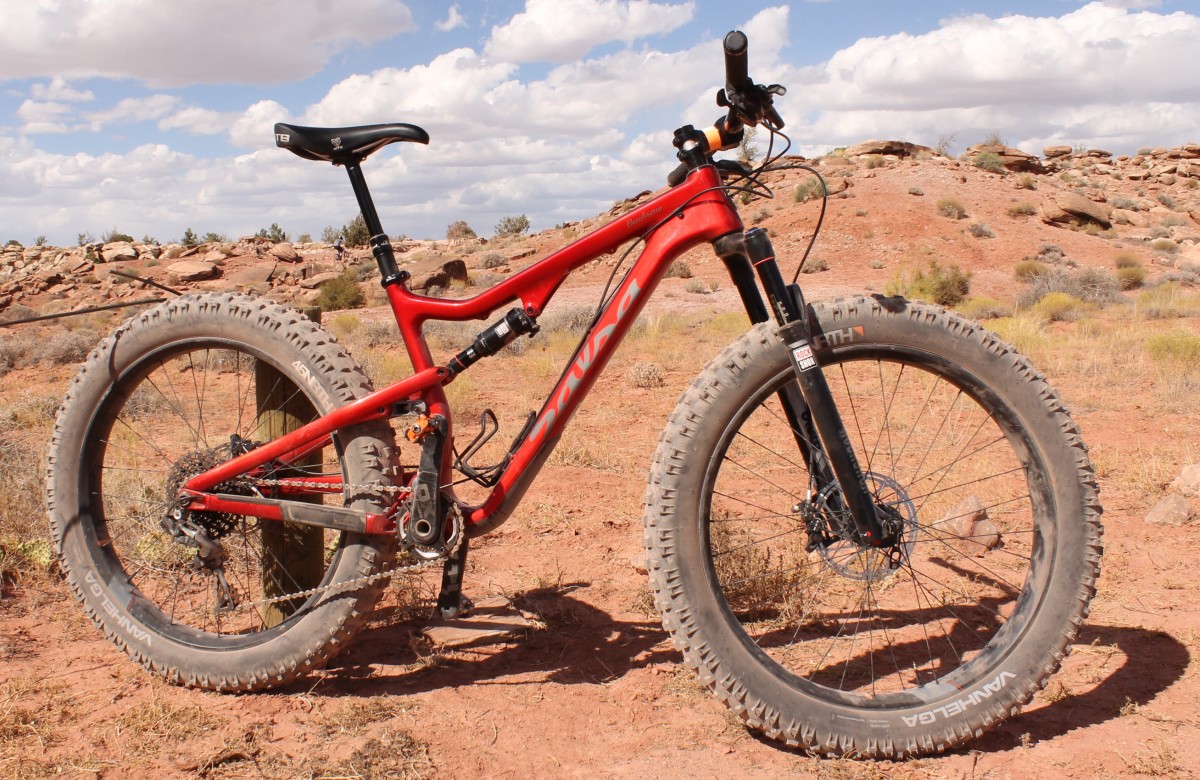 Essentially, the Bucksaw Carbon maintains the same geometry and setup from the aluminum Bucksaw that Jeff reviewed at Interbike 2014, but adds carbon to the frame wherever possible. This “wherever possible” includes the entire front triangle and the seatstays. The chainstays, however, are still aluminum.

Why the carbon upgrade? According to Salsa,

For increased chassis stiffness that further enhances pedaling efficiency and delivers an incredibly precise steering feel. The combination of knowing your front wheel is going exactly where you put it, incredible Split Pivot™ rear suspension performance, and the traction and stability of low-pressure, high-volume four-inch tires, boosts confidence, improves handling and helps you ride faster over rough terrain.

The 100mm of front suspension on the Bucksaw Carbon is managed by the ubiquitous RockShox Bluto, and a RockShox Monarch RT3 provides 80mm of travel in the rear. The rest of the bike wears a SRAM X01 drivetrain, SRAM Guide brakes, a Reverb dropper post, Whiskey Carbon 70mm rims, and 4″ Schwalbe Jumbo Jim tires. (Note: my demo bike had Van Helgas installed.) 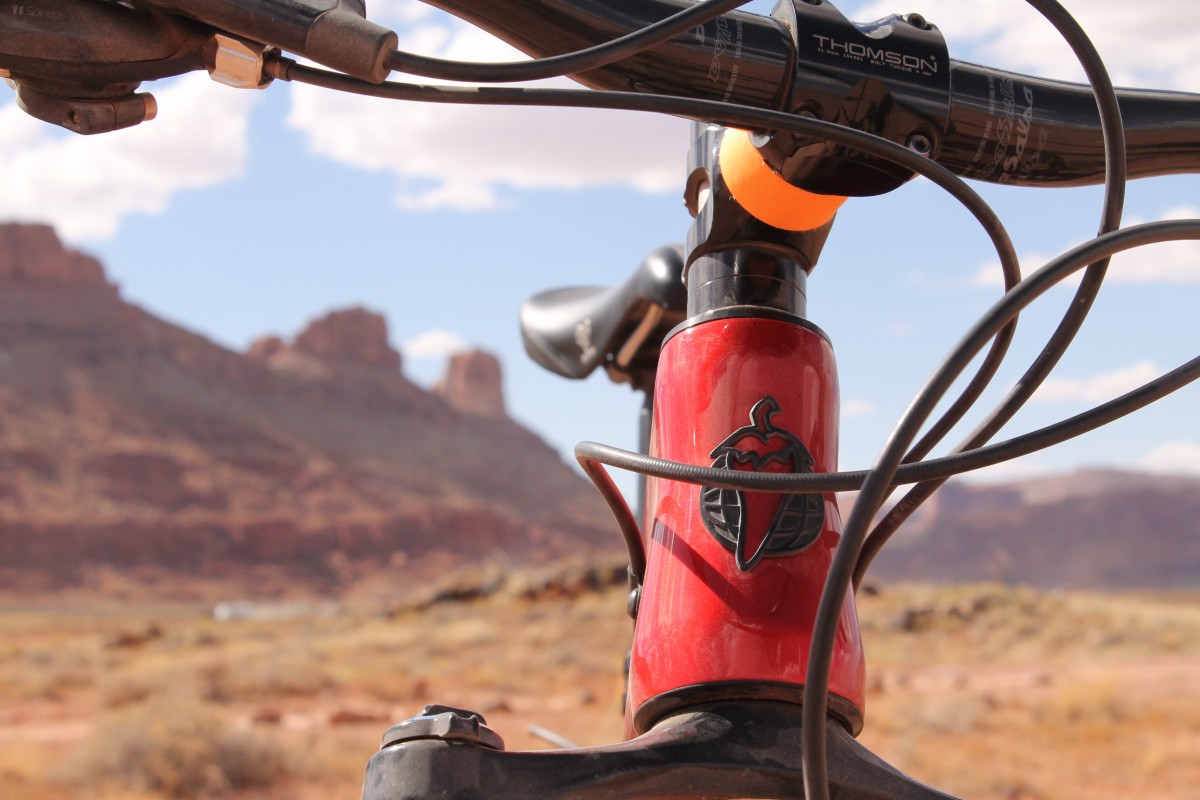 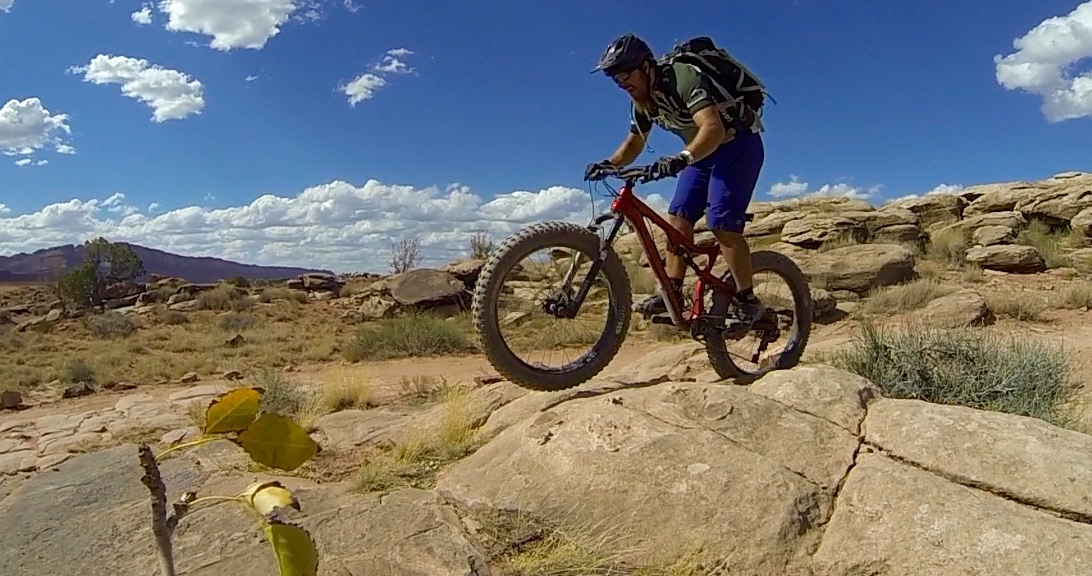 With the advent of plus-size bikes, my thirst for a full suspension fatty was slaked somewhat. But after riding the Bucksaw Carbon, I again couldn’t help but think about all of the applications that this bike would be perfect for. In fact, the #1 application that I could imagine, which was fresh in my mind, is riding trails similar to Sovereign in Moab.

Let me paint you a picture of the Sovereign trail in its current state. While once lauded as a classic Moab singletrack ride, when John and I pedaled it on the Thursday before Outerbike, it was honestly pretty horrendous. Sure, there were a few fun sections, but the fun found on those few sections was quickly sapped by the energy-draining sand pits between them. You see, this singletrack is motor-legal, and while I have nothing against dirt bikes on motor-legal trails, the reality is that dirt bike traffic often causes significant trail damage. Even on relatively flat sections, the horsepower that these dirt bikes can lay down had transformed what John claimed used to be totally-rideable singletrack into lengthy pits of churned-up sand.

But you know what? If I had been riding the Bucksaw, I could have pedaled right across those sand boxes. Like, I wouldn’t have even known those sandy sections where there.

When it comes time to rip down technical, steep terrain, the Bucksaw would also excel, thanks to its suspension, dropper post, and slack 67.7-degree headtube angle. The Bucksaw would be the perfect bike to ride that trail, and trails like it. 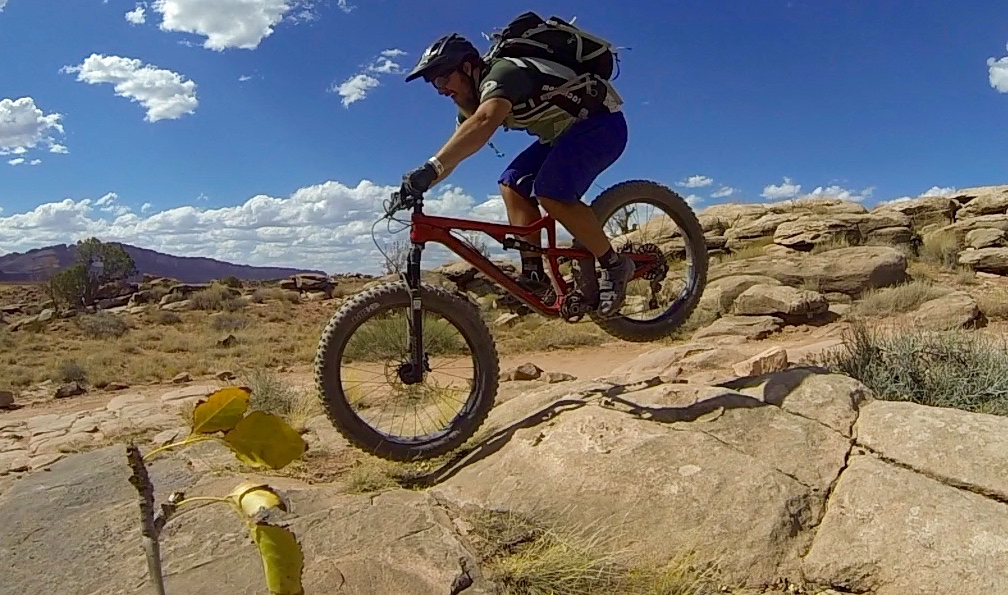 I live in an area that’s home to hundreds upon hundreds of miles of motor-legal trails. And many of those trails are mired with deep sand pits. I could easily see adding a full suspension fatty just like the Bucksaw to my stable for exploring trails just like those. I’ve even visited areas and looked at maps of regions where all of the trails seem to consist of motor-legal singletrack and doubletrack in sandy environs. For an intrepid mountain bike explorer in such a location, I’d venture to say that a full suspension fat bike might be the singular critical item that they need to fully and enjoyable explore that terrain.

The Bucksaw gets an excellent rating of 1/10 on my calf-bang scale. I could easily live with this amount of calf-bang long-term.

Above I talked about a specific use case to which the Bucksaw and other full suspension fat bikes are uniquely suited. But even in other circumstances where the Bucksaw isn’t uniquely qualified, it can still excel: singletrack, from flowy to technical, snowy winter riding, and everything in between.

If you want to ride all year round, in every condition imaginable, and you truly are looking for the one-quiver bike, there is no more capable mountain bike than the Bucksaw and its full-suspension fat bike brethren.

Gear
Never Underestimate the Power of a Good Zip-tie
Progression
Sizing Up or Down Plus Handlebar Widths and Crankarm Lengths:...
Gear
These MTB Deals are Fire, including 40% off Patagonia Dirt...
Gear
The Maxxis Minion DHF Tire is Still the One to...
Subscribe
Login
Please login to comment
1 Comment
Most Voted
Newest Oldest
Inline Feedbacks
View all comments

Now that I own one of these, I could not agree more. It is a couple of pounds heavier than my Beargrease was, and I notice that on climbs, but it is absolutely insane going downhill. It’s like riding a 140mm travel bike with mega-traction. It takes some muscle to maneuver it around, but once you point it downhill it feels like there is not stopping it.