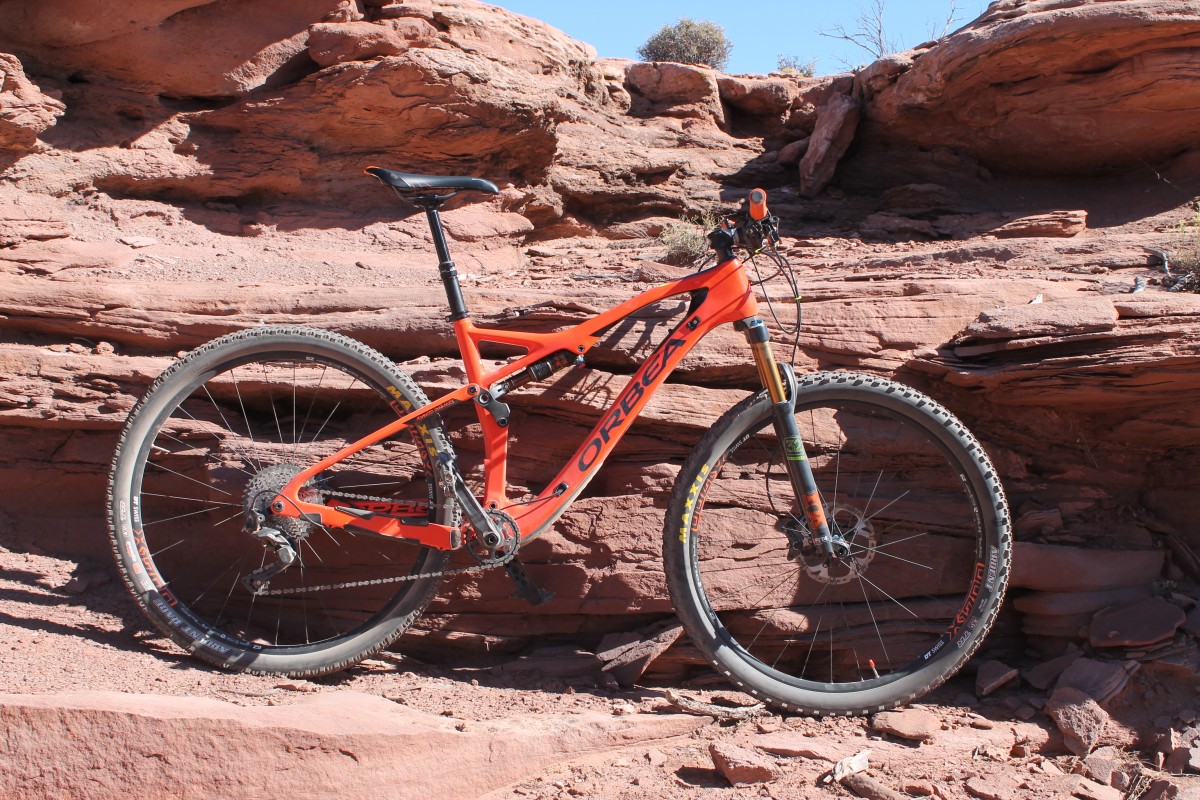 I always find it fascinating when I’m reminded of a long forgotten, but very important, lesson, even if it doesn’t really apply to me at the time.  My fourth demo at Outerbike, an Orbea Occam TR 29er did exactly that.  This bike reminded me of the futility of trying to properly assess a bike by a very brief, nondescript pedal–which is exactly what so many people do when they make a multi-thousand-dollar decision as to what mountain bike to buy, based on no more than a few spins around a bike shop parking lot.

As I pulled out of the Orbea tent and made my way to the day’s shuttle ride, I was underwhelmed. After unloading at the top of Moab’s Mag 7 trail system and starting down the trail, I had none of that wonderful feeling I normally get when I mount a great bike. The bike felt a little squirrelly and far too unsubstantial for me to throw all the way down the route back to the venue.

However, over the course of the next 20 or so miles, I came to appreciate the special virtues of this bike, and it ultimately became one of my all time favorites and would be my easy choice over many other bikes I had felt more instantly comfortable on. 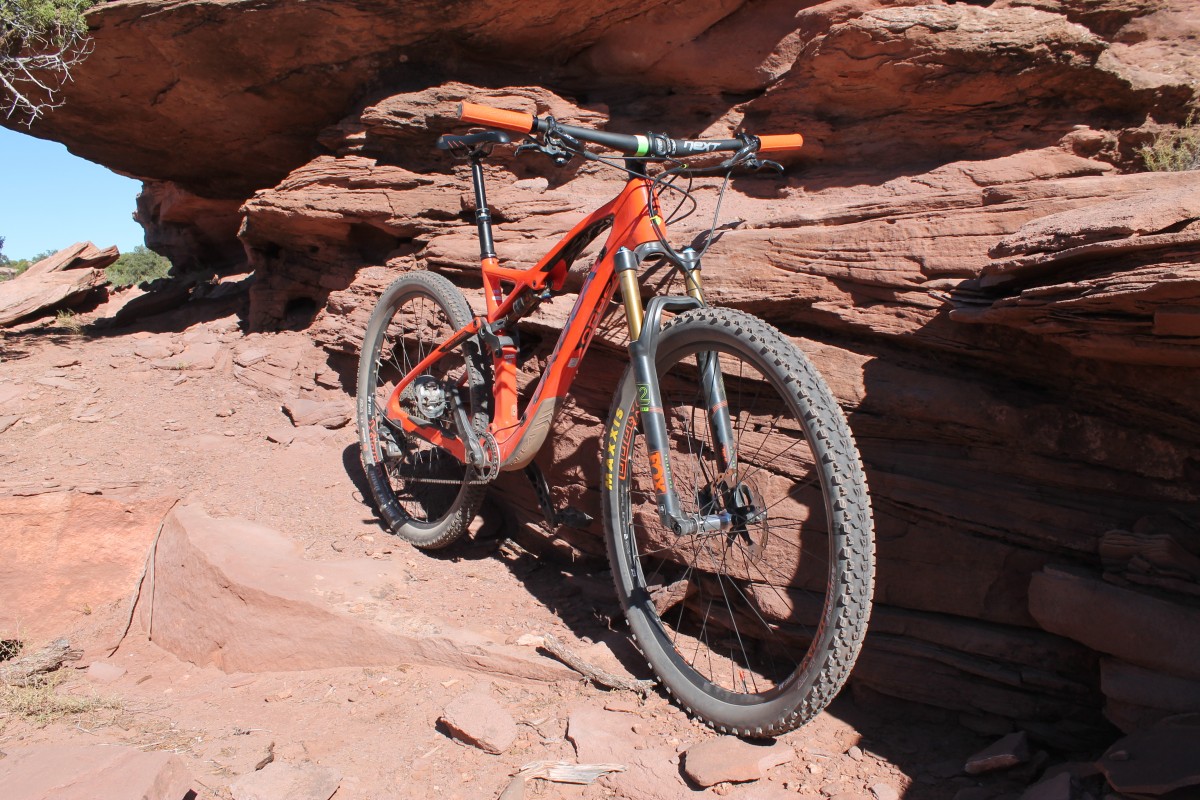 Extensions of the logic of “Occam’s Razor” (originally put forth by 13th century English philosopher William of Ockham) state that, all other things being equal, simpler is better–which is the philosophy behind the Occam’s design. Certainly making a new single-pivot full suspension bike in the era of Split Infinity, VPP, DW Link, and decades after the first Horst Link is tantamount to deliberately making an inferior product.  But not so fast there, Mr. Technology Lover!

Upon closer inspection, this is no simple single pivot, but rather a highly-refined single pivot with a few unique enhancements, which have it bearing no resemblance the first generation suspensions, which more often resembled pogo sticks than efficient means of handling rough terrain. As is the first necessity in any viable single pivot design, Orbea has perfectly optimized the location of all pivots to extract maximum performance from this otherwise simple design. More uniquely, the seatstay, while part of a continuous rear triangle, is constructed so as to flex, but without the weight and complexity of a separate pivot, giving the 120mm of suspension the best of both worlds.  Orbea also placed all pivots in such a manner that the shock piston will always compress without any pivoting where the shock joins either the front or rear triangles.  This eliminates the main source of frame flex on a full suspension bike. 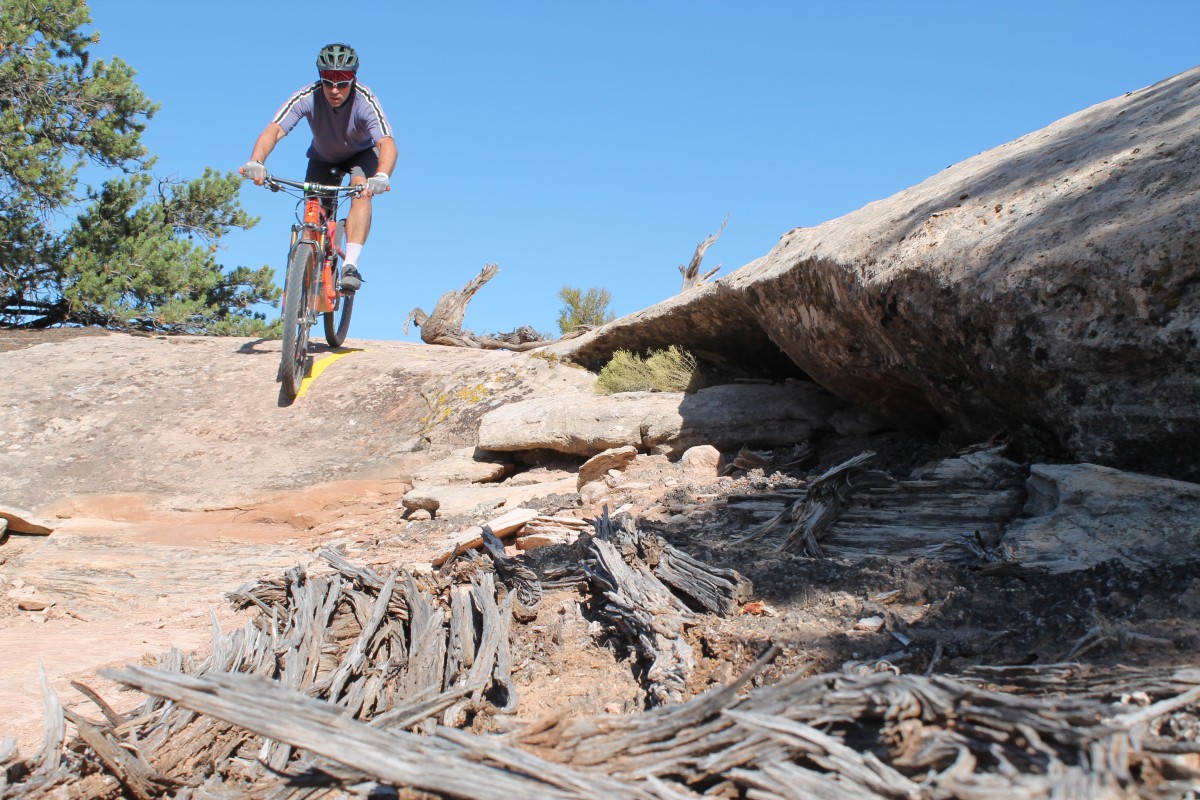 We could publish literally hundreds of pages of text debating the merits of various suspension designs in purely objective, mechanical terms.  We do spend many a page assessing various components and which will work best for any particular application.  We could crown a winner based on some set of objective criteria, but that would be as irrelevant as crowning a super bowl winner without actually playing the game.  The proof may or may not be in the pudding, but it certainly is out on the trail, where I actually got more time on the Occam than on any other steed during the three days of Outerbike.

I initially expected this to be a rough go for a number of reasons. The bike seemed slight, insubstantial, and not fully up to the task of having a 200 pound rider throw it down a shuttle run–even if it was a relatively cross country-oriented shuttle run.  The steering was too quick, the tires to narrow, and the choice of a light Fox fork with mere 32mm stations seemed foolish for an all-day trail bike.  It all appeared to be the result of a European manufacturer refusing to shed its race heritage in pursuit of a great trail bike.  Either that, or it was a classic case of a company trying to make a bike light, even at the expense of every other important trail bike performance category. 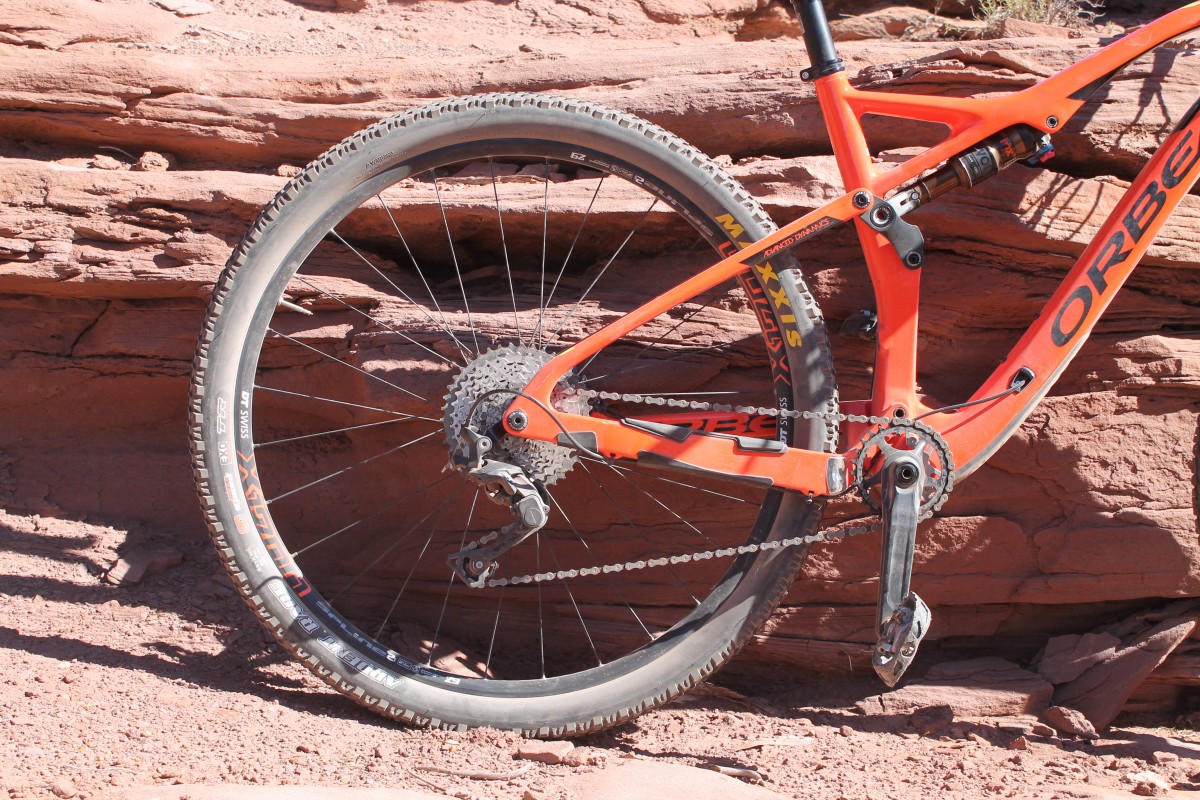 But out on that trail, a funny thing happened. Over the course of the first mile, I began steering the bike with a slightly lighter touch. I pedaled more smoothly.  I rode with greater precision and, in doing so, felt that very rare and elusive sensation of getting “into the zone” both with the bike and the terrain.  By the time I had covered two miles, I really started to believe in the bike.  By the time I had covered three miles, I was giggling at my attainment of trail riding nirvana.  Somehow, all those things which were “wrong” had combined to make something so right.

While I would never throw this bike around like I would a true enduro bike, I never felt like it was holding me back.  What’s more, whenever the trail turned upward, the bike propelled me forward.  Not only did I not despair at steep climbs, I looked forward to–and actually relished–them.  The shuttle ride was predominantly downhill, and I found myself retracing many sections just for the opportunity to climb them; I did this not to verify the greatness of this bike as a climber for review purposes, but purely for the fun of it.

At age 51, it’s been a good decade or more since I found joy in the climb, but the Occam brought it back.  And it didn’t matter if the climb was smooth or technical, the Occam simply killed it.  When the slickrock tilted up at an impossible angle, the Occam made it possible.  When the trail became a relentlessly ledgy series of step ups, the Occam took it in stride.  That simple single pivot kept the rear wheel in constant contact with the terrain with no perceptible loss of efficiency.  In short, this was easily the best technical climber I’ve ever ridden, and it sacrifices little in downhill capability to gain this very relevant recognition. 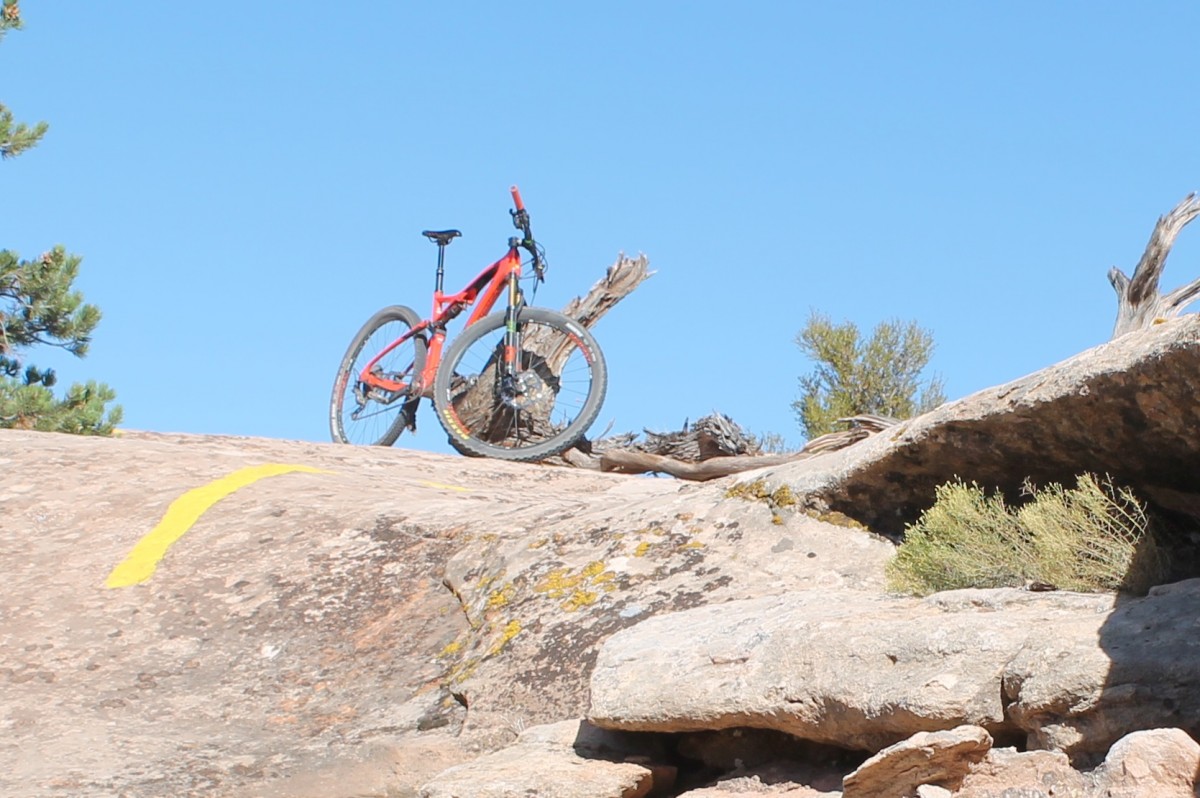 The Occam TR comes in a number of build kits from the $2,199 Occam TR H50 to the $7,999 Occam TR M-ltd, but all come with that wonderful suspension and efficient climbing.  The lower-level bikes are outfitted with 2×10 drivetrains while the top-level bike carries the XTR 1×11.  Given the efficiency and climbability of this bike, I can’t imagine wanting a 2x; the simplicity and weight savings of the 1x are essential elements of making this bike the unbelievable wonder that it can be–no granny gear necessary.

Similarly, Orbea runs a parallel Occam line called Occam AM, with a slightly beefier parts kit, including Fox 34 forks, along with 27.5″ wheels VS the 29″ wheels on the TR, at similar price points to comparable Occam TR models.  As versatile as the Occam frame is, this sounds like a good option to have, although I can’t help but wonder if taking the Occam and dressing it up in “AM” garb would dissipate some of the magic in the Occam TR.

Over the course of Outerbike, I put double digit miles on eight bikes, all but one of which I truly loved for what they brought to the sport in their own categories. But if I had to put just one in my garage today, the Occam would be, if not the obvious choice, at least one of three finalists.  I can’t imagine a better bike for either all day rides that threaten to drain every last bit of energy from your quads, or any ride where not disparaging the climb or even, perish the thought, actually enjoying the climb, is a goal.  When you think about it, most rides, especially those not covered by lift service, fit one or both of these categories, making the Occam a superb choice for most of us.