Santa Cruz invited a bunch of folks out to their HQ in advance of Sea Otter to talk about what they’ve been up to and to get a quick ride in afterwards. A lot was covered–some of which we can’t share just yet–but a large chunk of the presentation focused on their trail building efforts in the San Vicente Redwoods, as well as a limited edition Santa Cruz 5010 celebrating Chris King’s 40th Anniversary.

After the Power Points, it was time to ride some bikes! I ended up on a Santa Cruz Hightower, set up as a 29er although it’s also offered with 27.5+ wheels and tires as an option. At first blush the bike looked absolutely huge. It is, after all, a long, slack 29er with 135mm rear and 140mm front travel. 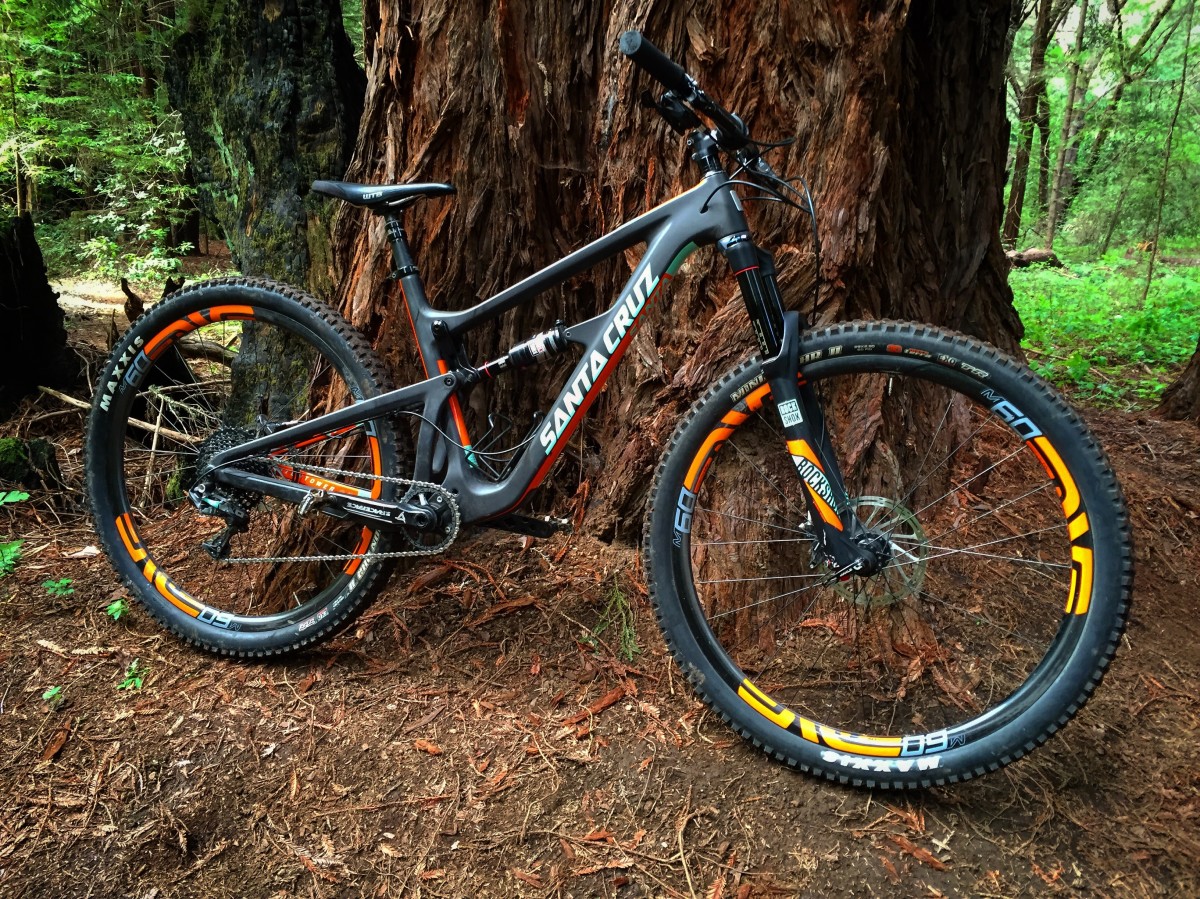 Once I was on the bike, the fit was great. For reference, I’m 6 feet tall with long-ish arms. The 450mm reach and 60mm stem on the size large frame combined to create a roomy–but comfortable–cockpit. The ride began with a good chunk of climbing, first on pavement and then trail. With a steep 74.3-degree seat tube angle, the pedaling position felt comfortable. I put the shock in the firmest setting for the paved portion, which made the bike extremely efficient.

When we reached the dirt, I flipped the RockShox Monarch RT3 into the middle setting to help improve traction over the roots. As we rode, I noticed that I was intentionally taking the most direct line up the trail. Part of that was to test the suspension, but also because the bike is a monster truck. Something about it just made me want to plow over everything.

As soon as we hit the first downhill, it became apparent to me why Santa Cruz designs their bikes the way they do. The descents were steep. Seriously, one trail was probably the steepest thing I’ve ridden this side of the Whistler Bike Park! Thankfully, the Hightower has a low standover height, and they specced it with a 150mm dropper. Even so, my butt got buzzed by the rear tire in a couple spots. That is steep!

There were also plenty of blind drops and hucks to flat to keep us on our toes.  I appreciated–and used–every millimeter of travel front and rear. The low bottom bracket had me doing my best Ratboy impression, shoving the rear end of the bike hard into the corners. The trails and bikes were silly fun. Our entire group was giggling like kids on a playground.

Our ride ended with a rip down a flow trail. To provide more pedaling support for the smooth trail, I put the shock back into the middle compression setting. This took the edge off all the doubles I cased, but also allowed me to hammer on the straights to keep Santa Cruz’s product manager, Josh Kissner, in sight.

While 18 miles isn’t a long ride, it was more than enough to get a first impression of the Hightower, especially considering the varied terrain we rode. The most notable thing to me was how I instantly felt comfortable on the bike. As I said earlier, the bike looks huge, but once you’re actually riding it, its size is masked by a neutral fit, great pedaling position, light weight, and efficient suspension. When the time came to get rowdy, the Hightower was more than ready to play. There were sections I would have panicked, stopped, and tip-toed down on a lesser bike, I can tell you that much.

The Hightower is still a lot of bike, and it may not be the best fit if your terrain isn’t very demanding. But damn, if you’re heading out on unknown trails, it looks to be an ideal companion.

I’ll take a stab at it: the guy in the Red Bull helmet looks like Danny MacAskill, the guy with the shaved head in the back looks like Vernon Felton, and the guy on the farthest right looks like Seb Kemp.
Oh, and the guy directly behind the torch thing looks like Cedric Gracia.

Which ones did I miss? (Or get completely wrong lol)

Sounds like Santa Cruz really nailed it with this bike!!!