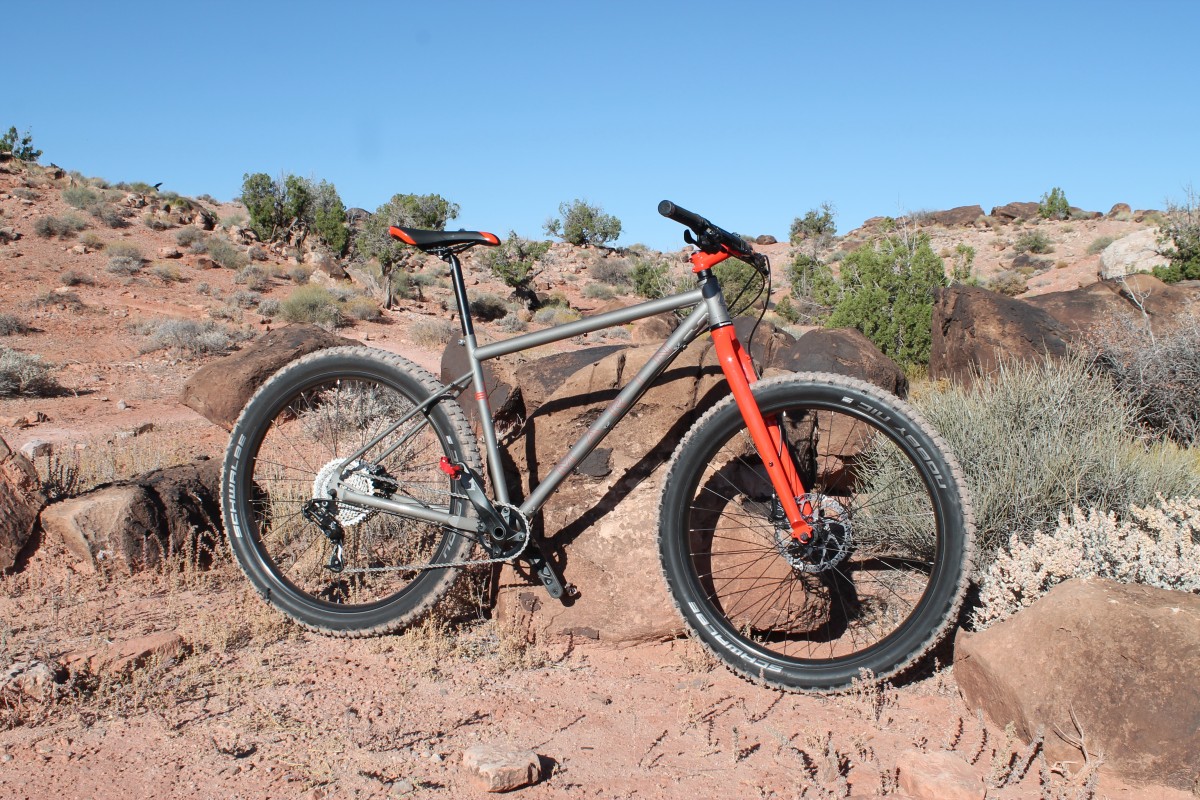 The opening of Outerbike is a frenzied melee, as hundreds of riders who have waited an hour or more in the morning desert sun all sprint to the tent of their choice in hopes of getting the latest, greatest, most hyped, or most desired bike as their first demo.  If you’ve ever been to a Disney park during spring break and waited anxiously for the smiling Mousketeers to drop the rope so you can be first in line at your favorite ride, then you get the picture.  Having done my research on every vendor attending Outerbike and what new offering they might have which may have remained under the radar, I was hopeful that my place in line, a good hundred or more people behind the rope, would still allow me to secure a new ride without so much aggression or fear of waiting another hour in line at the tent, only to find the guy in front of me took the last example of my choice.

So as those in front of me sprinted to the Yeti, Santa Cruz, and Ibis tents, I calmly strolled up to the Marin tent where there were just a few in front of me already being fitted for Marin’s latest full-suspension trail bikes.  I scanned the rows of dozens of such offerings with high hopes that they had brought at least one size-large Pine Mountain.  I worked my way across the racks until, tucked away in the back corner, I saw the matte silver frames and bright orange rigid forks, which made for quick recognition at a distance, and there were two of them–surely one must be a large.  It was, and with no suspension to set up, I was out on the trail in less time than it took the fourth person in line at the Santa Cruz tent to be told there were no more Bronsons in his size and he got up at 5am for nothing. 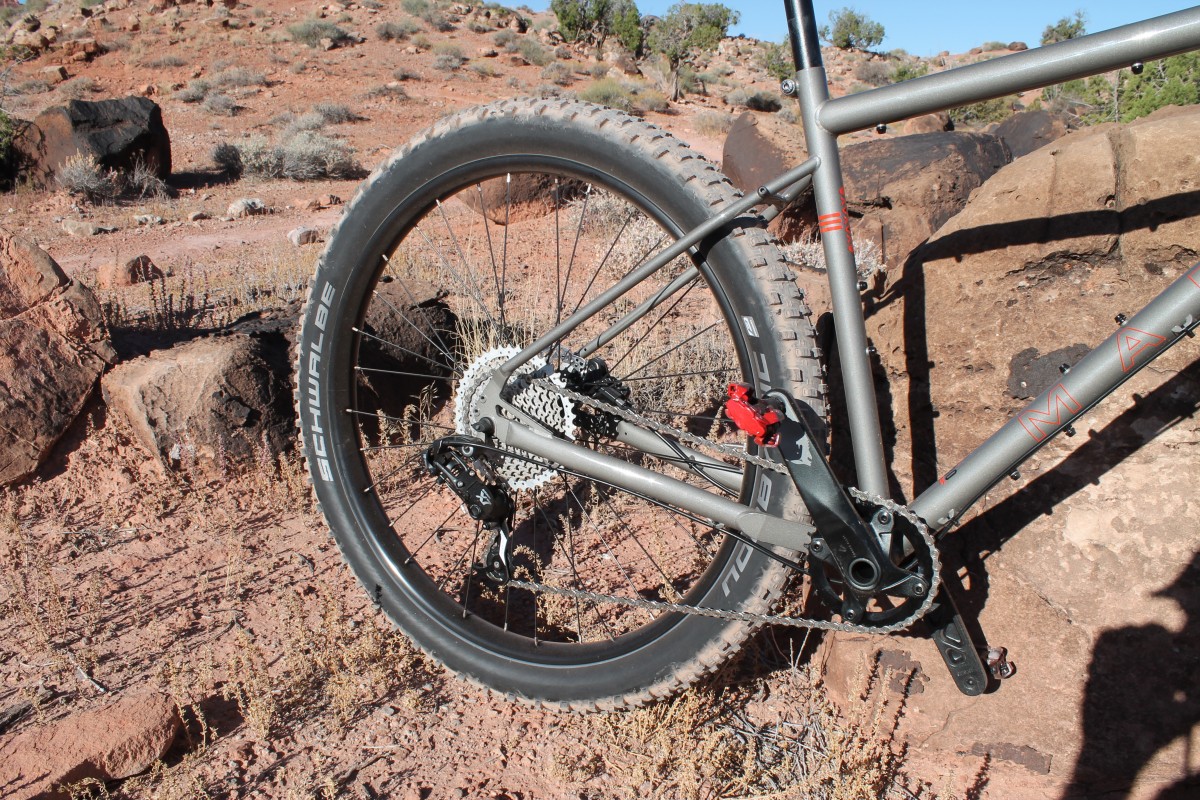 As you have no doubt surmised from the paragraph or picture above, the Pine Mountain is a fully rigid bike.  Upon closer inspection, you may have noticed that it comes in the new 27.5+ format.  If you are a long time cyclist and are familiar with Marin as one of the early pioneers of mountain bike production, you may also recall a Marin called the Pine Mountain from the mountain biking days of yore.  As part of its 30th anniversary, Marin has resurrected this old nameplate in a new guise for the modern rider.  The Pine Mountain, it turns out, is a superb example of bringing back the joy of early mountain biking, but doing so in a way that should please today’s enthusiast–especially if that enthusiast has a bit of a purist streak and appreciates simplicity in an updated form. 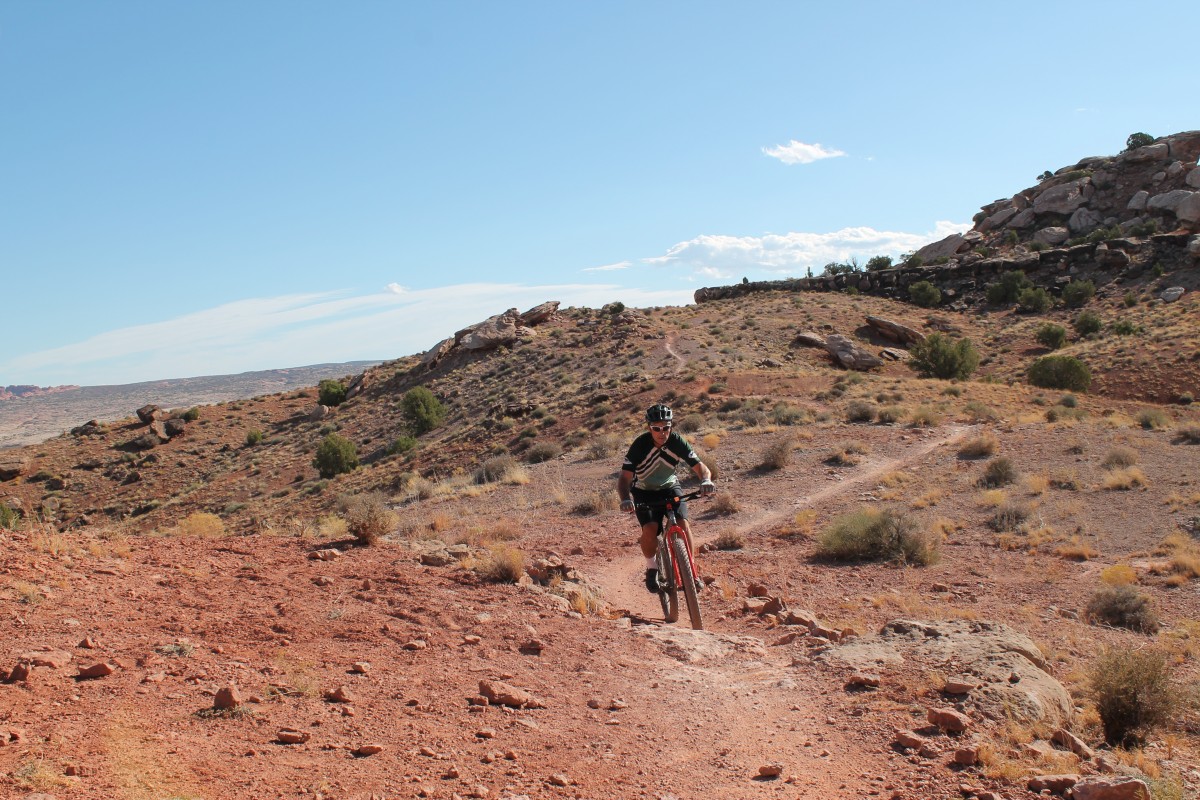 The Pine Mountain starts with traditional-sounding 4130 CroMo tubeset, but then welds it up in a very contemporary geometry specifically-suited to creating a versatile 27.5+ package.  The frame carries multiple rack and fender eyelets and three water bottle mounts to support a major backwoods expedition, but I also found the geometry to be downright playful across all three dimensions: going up, down, or side to side.

While most Outerbikers were demoing fat and rigid bikes on the sandy roadways of the Brands Trails, I immediately set out for the North 40 singletrack loop, which offered a nice variety of sandy to hardpacked cruising punctuated with more technical sections, including a couple strong upper intermediate rock sections.  I carried the same stupid grin on my face throughout, regardless of what terrain I was on at any given moment.  After four days in Moab including double-digit mileage on my own rig and eight different demo bikes, all outstanding in their own way, I can still say that my moments of greatest joy were spent on the Pine Mountain. 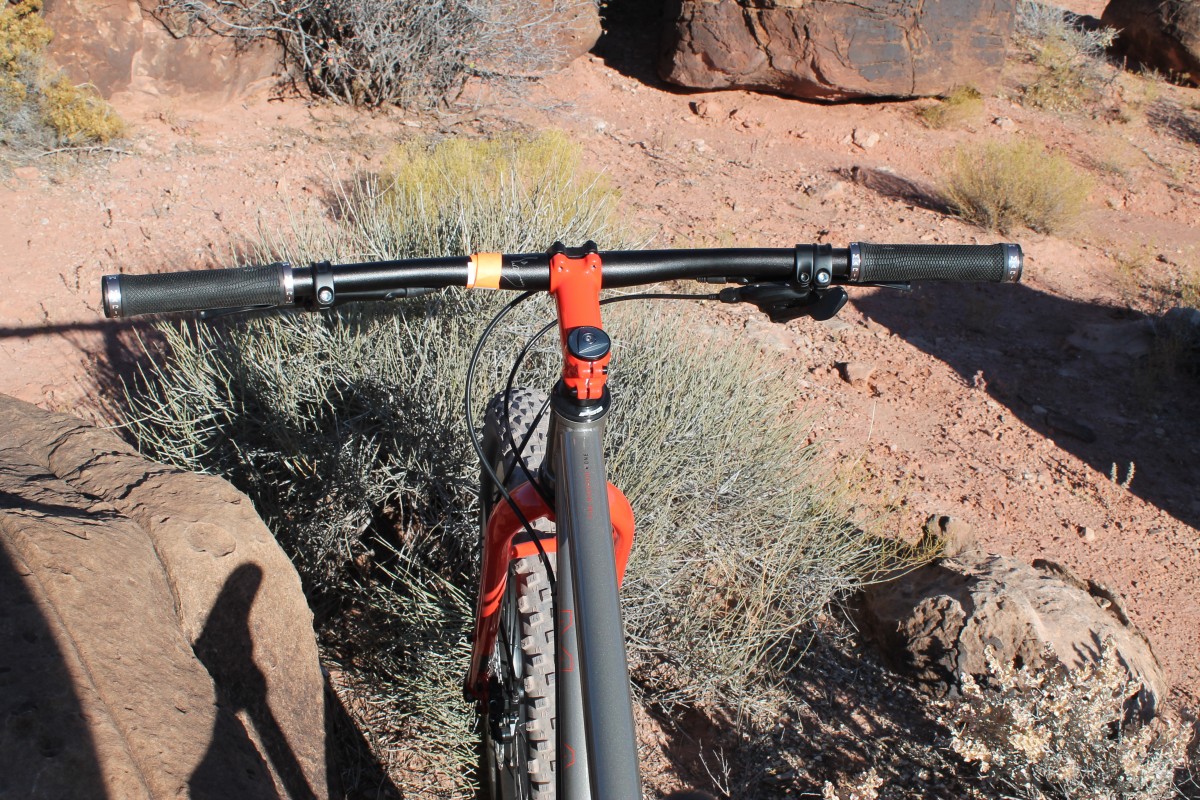 While this version of the Pine Mountain doesn’t have any suspension to worry about (the “2” model is available with a Fox 34 fork), it appears Marin put great thought into its parts package.  The mostly SRAM 1×10 drivetrain was a perfect match for this bike and had it seamlessly scooting around the many quick ups and downs and tight rocky turns.  I was a bit squeamish at first noting that it was sporting Schwalbe tires; at 200lbs and not being a finesse rider, Schwalbes always seem to be soft in the sidewalls, as they inevitably bend under my attack, threatening potential disaster in any hard turn.  But not this time.  The 2.9″ Nobby Nics held up admirably and added to my confidence throwing this suspension-less bike around all manner of terrain. Truly, everything about this bike seemed perfect, right down to the nicely color coordinated house brand saddle. 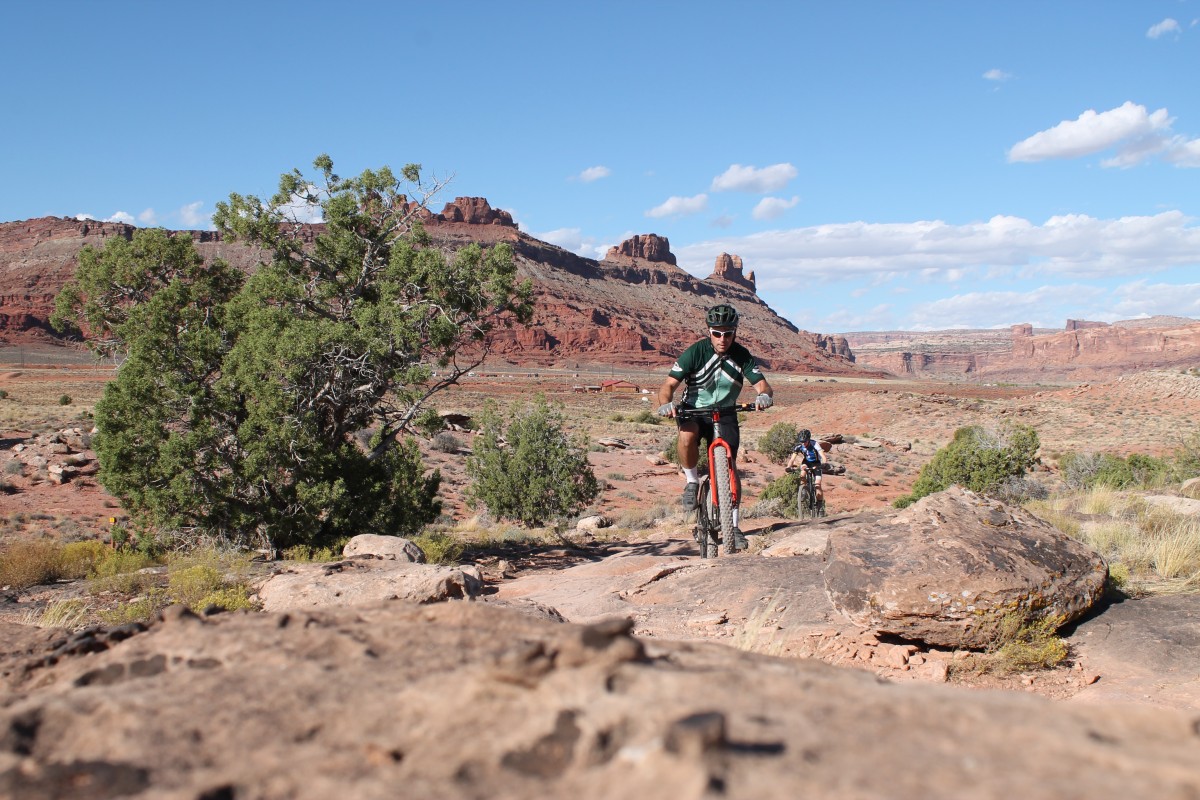 Now for the real kicker.  Imagine my surprise when I arrived back at the Marin tent (most reluctantly, I might add), and inquired as to the MSRP, to find out it was a mere $989!  Here I was, having the absolute time of my life, grinning like a little kid in a candy store, all because of a sub-$1,000 bike!  I would have never thought it possible.  Again, this attests to the care Marin put into putting this bike together, selecting a parts kit that performs so well without breaking the bank.  I would call this a crazy-fun bike at any price, but at less than ten Benjamins, it was hard not to just walk away with one right there on the spot. 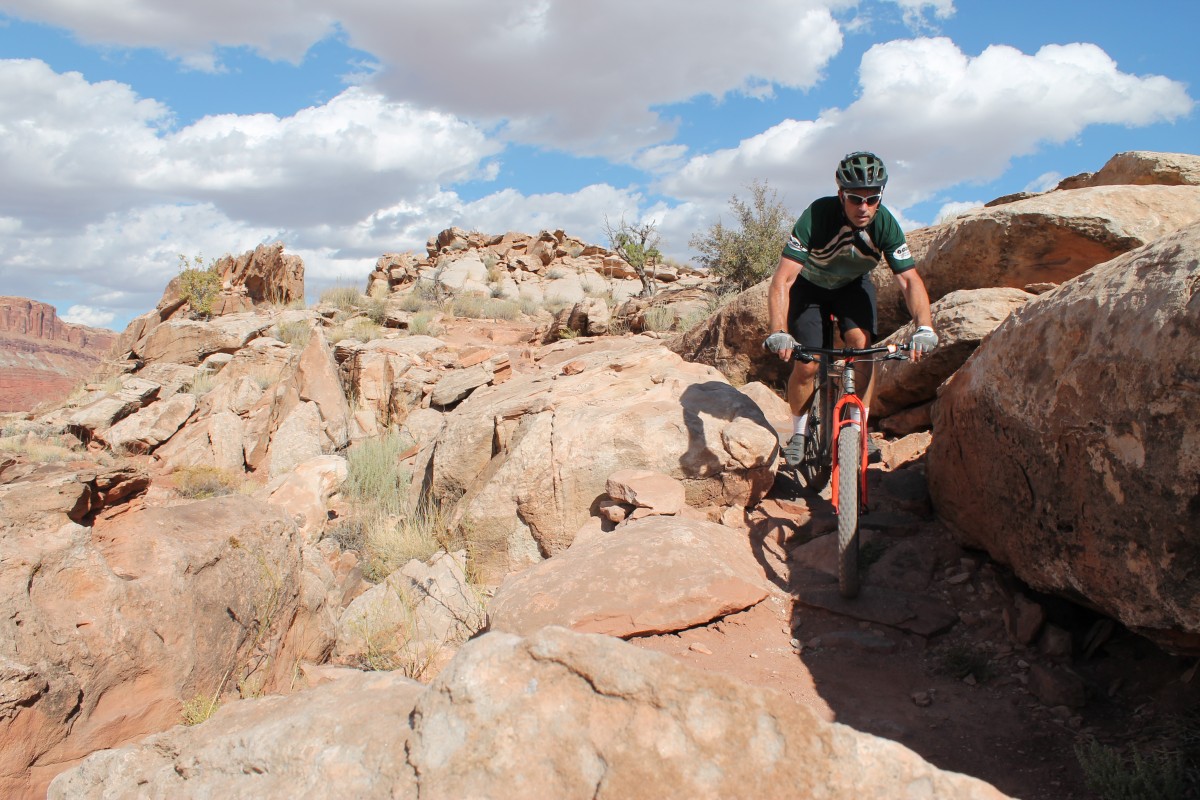 So what’s the catch?  For many, it’s that whole rigid thing.  But just as I used to think there was no such thing as a wicked-fun bike for under a grand, I also used to think I’d never want to own a bike with no suspension.  Most of today’s mountain bikers have grown up with suspension, at least in the front end, and have no concept of how entertaining and rewarding a rigid bike can be.  The plus-tire size just amps up that fun factor to a whole new level.

Weight is one other potential catch.  This is a steel bike after all, and it’s no featherweight.  I won’t tell you how much it weighs, but rather encourage you to give it a try before you inquire, so you won’t have a preconceived notion in your head based on a number which, at least in the case of the Pine Mountain, is truly irrelevant.  I’m loathe to make bold predictions such as, “this bike is going to be a big seller,” but I won’t shy away from a very personal value judgment.  I will finish by saying that, “This bike should/deserves to become a BIG seller.”

Gear
Why are Good Rain Jackets so Expensive? We had to...
Gear
Best Mountain Bike Gifts Under $50
Progression
How to Stay Strong in the Off-Season, Even if You're...
Trails
New Tech Trail Coming to AR, Big Grant to NC...
Subscribe
Login
Please login to comment
2 Comments
Most Voted
Newest Oldest
Inline Feedbacks
View all comments

Man, this sounds like a super-fun bike!! I’m pretty sure I’d have a fun time on it too 🙂