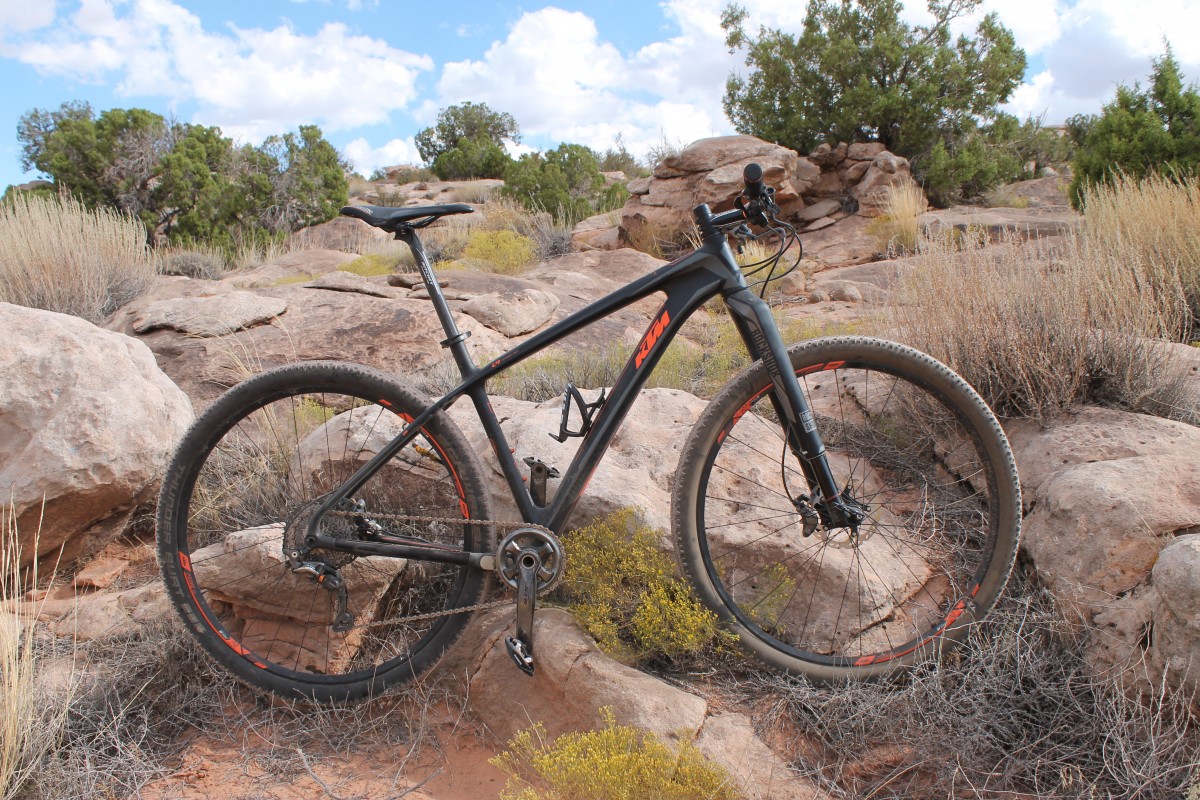 Outerbike was full of surprises.  One came while wandering down the second aisle looking for my next demo bike and spotting a tent with the letters “KTM.”  Doesn’t KTM make motorcycles?  I knew they did, since I had ridden them, and while I never had any delusions of becoming a pro motocrosser, I knew enough to know they made some very rad dirt bikes.  But mountain bikes?  This was worth investigating.

The surprises piled up as I found out KTM had actually started making bicycles before they made motorcycles. However, this was their inaugural year trying to break into the American market. I decided then and there to be at the forefront of checking out this long-time bicycle maker/first-time importer to the U.S. 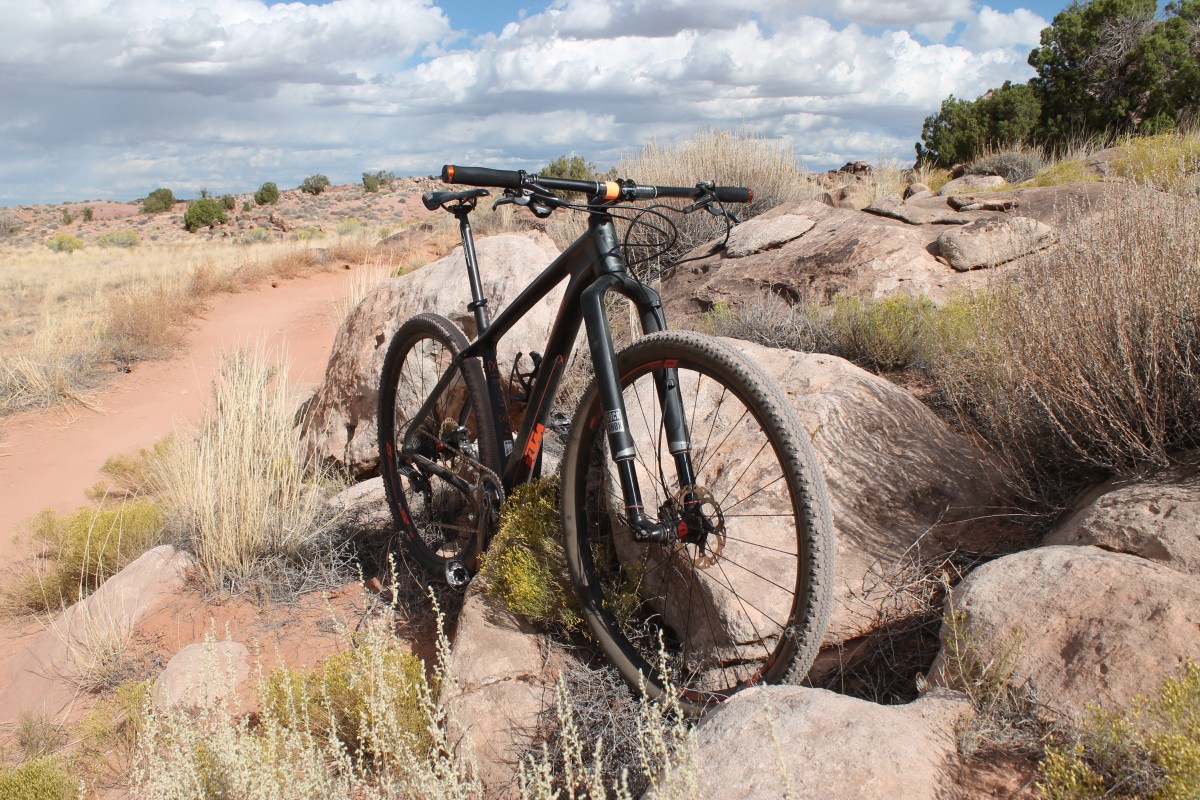 Having not done my homework on this particular brand, I let the KTM rep help me select from a couple hardtails and a slightly-larger stable of fullys. After a brief discussion, I was headed out with what I suspect will be the highest-end bicycle I will ever throw a leg over, no matter how long I live.  He hooked me up with the top-end Myroon Prestige, a total thoroughbred carbon hardtail race rig retailing at $8,500 .  Just as they do with their most uncompromising racing motocrossers, KTM spared absolutely no expense in making the Myroon Prestige the ultimate podium chaser. The parts kit included a component list you would expect to find if deliberately trying to put out the most expensive bike you could, including a full array of top shelf XTR goodies and the uber-modern Rock Shox RS1 fork.  While the component selection showed up well in the price, I was keen to find out if it would show in the ride. 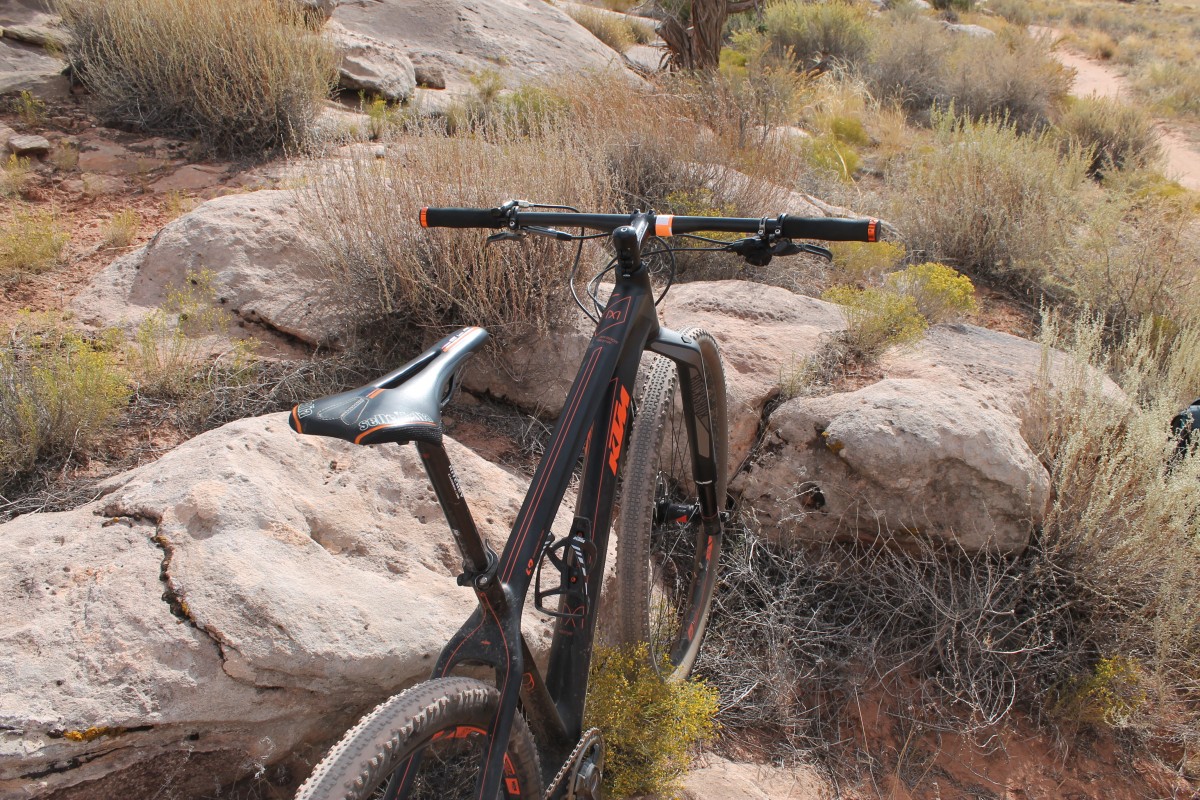 The frame is a very svelte monocoque carbon that just screams “light” and “fast.”  With the ultralight parts kit and fork, the whole rig barely hits the 19lb mark.  This lack of heft was immediately apparent, as any pedaling motion launched that stiff frame like a jet being catapulted off a carrier deck.  Amazingly, it does so smoothly and dare I say even somewhat comfortably.

What was even more amazing was how the bike didn’t beat up my backside like most purely purpose-driven cross country bike do. I though KTM must have a supply of special Austrian fairy dust they sprinkle on these frames to make them this compliant without losing any of the stiffness so crucial to cross country racing.  Actually, the “magic” comes from a relatively flat, leaf spring-like profile in the seat and chain stays that significantly reduces chatter. 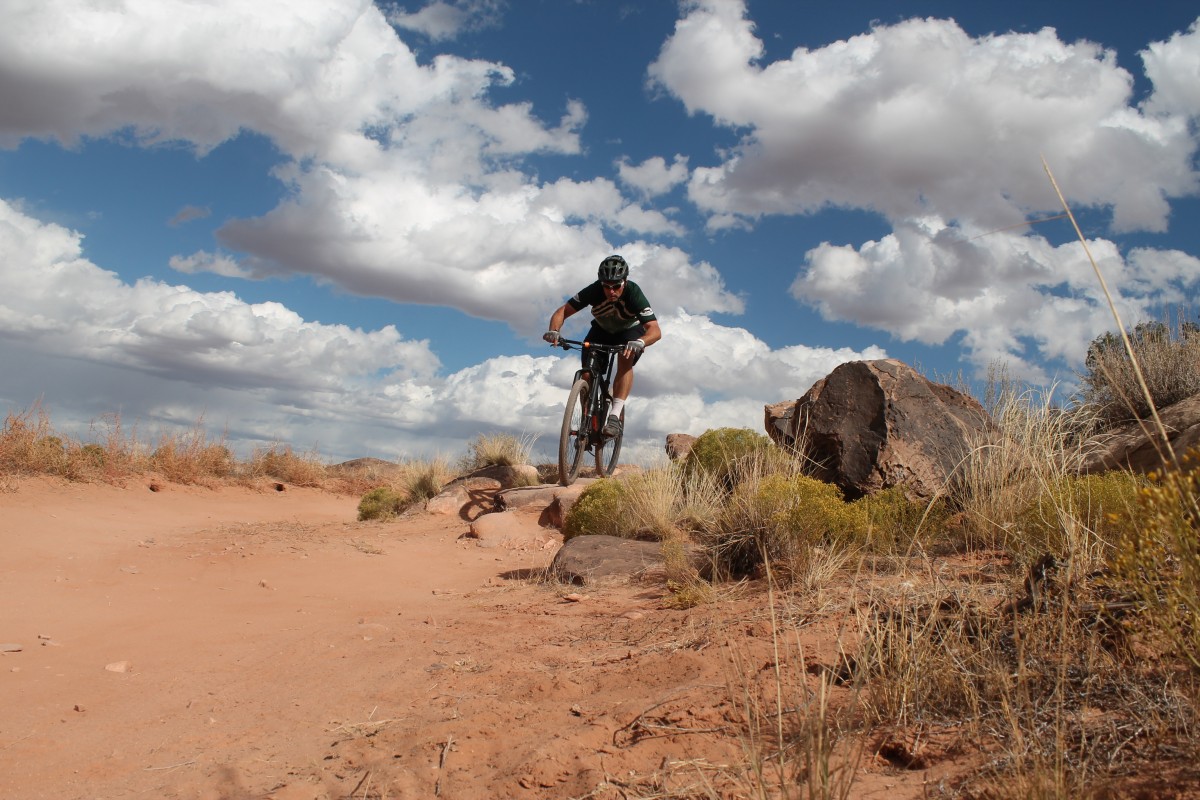 I had some reservations as I set out from the tent on my first-ever ride on a Rock Shox RS1 fork, as I had heard mixed results from those I knew who had tried one.  Initially, I was totally underwhelmed, but thought that might be due to the fork being set soft, so I swooped back to the tent and, after pumping the fork up slightly higher than the chart indicated for my weight, I hit the trail again and was much more gratified.  The fork had amazing small bump sensitivity, yet didn’t buckle when I veered off the buff and charged rock sections. I did, however, notice some flex when laying the bike over into high speed corners. This combined with the hyperlight, thin walled, Schwalbe Thunder Burt tires, occasionally led to slightly skittish cornering.

On the plus side, the Thunder Burts are, in addition to being very light, almost entirely devoid of rolling resistance.  I feared they might also be devoid of traction, but they gripped well in both the hardpacked and sandy sections of Moab’s Brand trails.  While they did flex a bit in the hard cornering, it was never enough to spook me and, the more I rode, the more comfortable I became, eventually throwing the Myroon around corners like I would any other bike.  Upon returning the bike, I did notice some telltale streaks running radially out from the rim, indicating that some sealant had escaped on a few occasions–most likely during high G maneuvers. 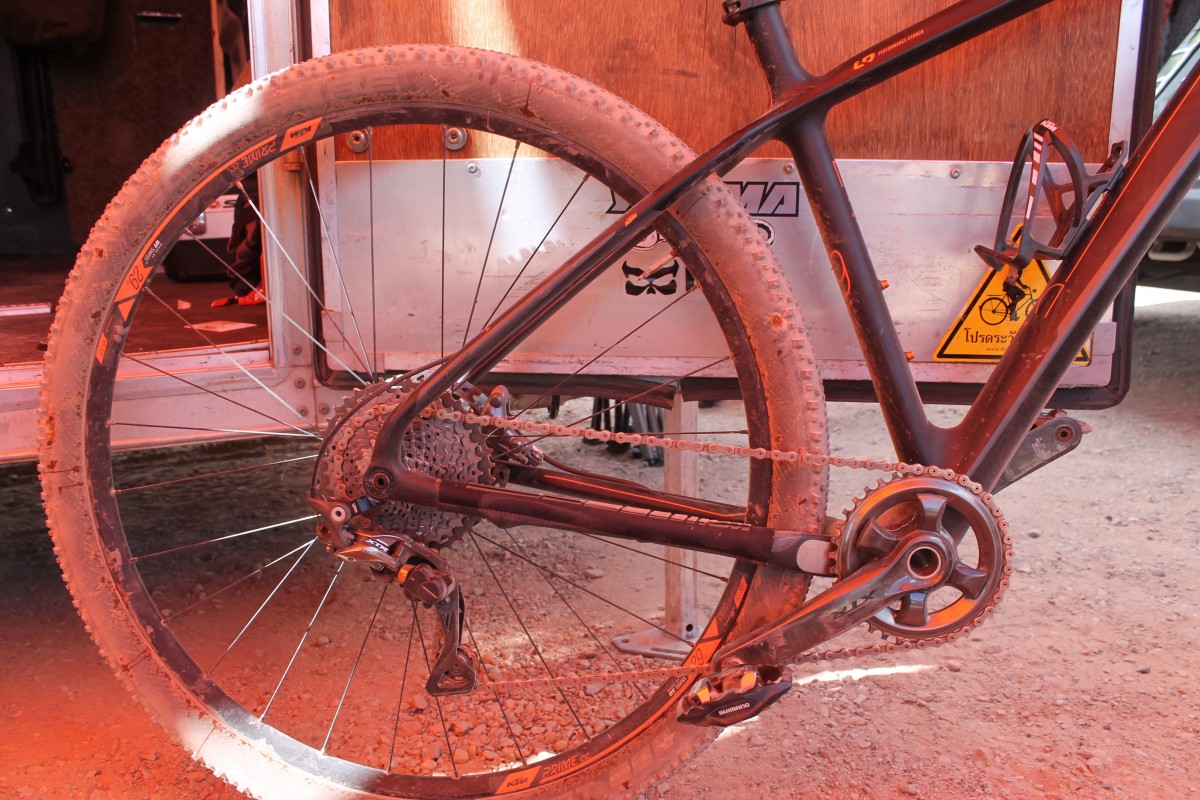 KTM has brought a new model to the U.S. intended to give them instant race credibility, and the Myroon Prestige should do exactly that.  My only complaints are those based on:

While I could drive the Myroon through the occasional rough section, it is still a true race-day-only mount.  If you’re looking for the most uncompromising race rig you can find and are either independently wealthy or well-sponsored, then this one is worth checking out.

For real, I wanna know.

Mind: blown. Seriously, these components can be found on other bikes that don’t cost nearly as much. Seems like maybe KTM is trying to out-Trump the Donald with the branding on this one.

The “leaf spring-like profile in the seat and chain stays” better be pretty special and expensive to manufacture. It sounds good but I’m a little skeptical…

Specialized has a $10k hard tail, both Trek and Niner have $8k hard tails. I just wanna know who’s ponying up that kind of scrilla for hard tails.

Seems like a nice bike but too expensive. That Rock Shox fork is super expensive and has a motorcycle design which is cool and heard good things about it. I just came second in a cross country race on my carbon Rocky Mountain Vertex with all XT parts except my XTR pedals and if I would spend a bit more I could have had all XTR components for under $6000. If I had all XTR maybe I would do better? Not sure but I cant justify spending $10000 on a hardtail. I would like to see that bike win some races before spending so much money. I wish KTM all the best but not sure how they are going to win North American market