Durango Bike Company (DBC) was well represented at Outerbike Moab despite their small size and limited build-to-order business model. Their custom bikes with meticulous attention to detail garnered a lot of attention, as did the creative way they had the bikes displayed.

I did not personally test this bike, but instead it was tested by an endurance athlete I frequently ride with who, in my opinion, is more adept at discerning the nuances of singlespeed bikes since I do not own or ride one. He has been riding and racing long distance and singlespeeds longer than most of our testers have been alive (sorry Bruce). He rode this custom DBC Pucker and almost instantly fell in love with it. In fact, he is currently negotiating with Durango Bike Company about purchasing it to replace his current singlespeed hardtail (the power of Outerbike!). After a lengthy discussion with him about his impressions of the Pucker, I have included the bike’s specs and his take-aways to lend our singlespeed riders some insight into this model.

The Deets (from DBC for this specific custom build)

Durango Bike Company also has more information on the Pucker and it’s versatility. From their website:

Our tester seemed most impressed with the slack 68-degree head tube angle and the 140mm RockShox Revelation fork, not something you typically find on a racing singlespeed, or a hard tail for that matter. He described the fork as nothing short of awesome, which made the bike seem light and agile over the technical rocks on the southern end of the Bar M Trail System. He also noted that having the ability to change the head tube angle to a more crisp 71 or 72 degrees for different racing applications was a real bonus for a bike of this caliber. He was pleased at how well the bike maneuvered up and over round boulders, as well as up rock-type stair climbs, stating, “it was so responsive. . .it felt like when I wanted to go somewhere, I just thought it. . .and it went.” 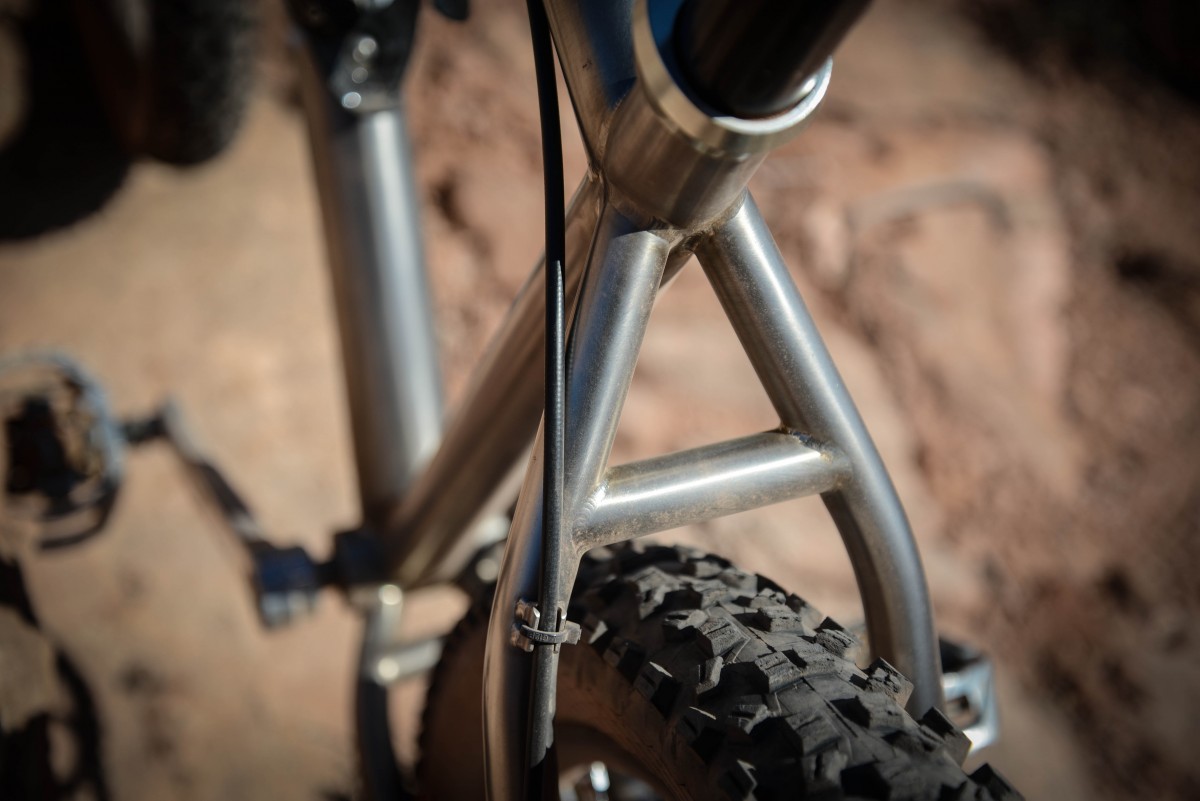 He also noted that the overall geometry was stiff and allowed good power to the pedals, without feeling uncomfortable–except for the saddle, which he found unpleasant. The bars were quite a bit wider than he normally prefers, but he found them right at home on this particular bike given the long fork and slacker geometry.

DBC had this bike setup with a 34/17 gear ratio, and other than a personal preference of running a 16 on the rear, our tester thought the balance was “perfect” for trails that were tested and the trails he races on in Colorado.

Bruce also noted that the only thing he would change, given the way this bike was set up, would be to add a dropper post–which of course is an easy upgrade with the Pucker’s standard 31.6mm seat tube.

Everyone that admired this bike, even those who did not test it, agreed that the raw titanium and graphics made the bike “lust-worthy”.

Bottom line: titanium never goes out of style, and it lasts forever. A custom single speed like this, with modern geometry and slack posture, is guaranteed to last for years and provide miles and miles of grins above and beyond competitors with more traditional XC setup.

Now that looks like the perfect example of “Wouldn’t be my only bike if I had just one, but I would love to add one to my stable.”

You had me at SS Titanium Hardtail.

I’ve owned one Ti bike in my lifetime, and I really regret selling it. A custom Titius Racer X…at the time, she was unbeatable.