Every cyclist knows, when his legs get tired, all he has to do is simply order them to shut up and he can keep right on pedaling. This strategy has no effect on the taint, however. When the taintular region experiences extreme fatigue, or even worse, blunt force trauma, it is deaf to all forms of encouragement. The rider is going to need to lie down for a while before any more cycling occurs.

Mind you, I am only familiar with mountain biking effects on the male anatomy. I thought I was going to get familiar with a female anatomy once, but she made a shocked and disgusted face when I told her how much my bikes were worth, so I faked a heart attack on the spot and lay very still until she went away.

My dating life aside, the taintular area is our Achilles’ Heel, which must have sucked especially much for Achilles because he was vulnerable at the heel and, presumably, the taint as well.

Selle Italia knows full well how important comfort in this area is, which is why they are perpetually striving for taint-related happiness. Behold their latest missile rocketing toward your chamois, the Max SLR Gel Flow: 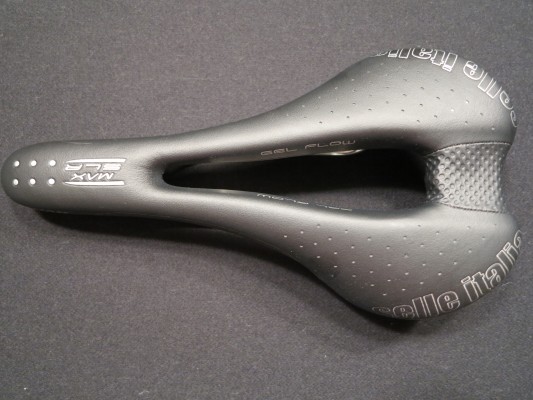 Now, you may have noticed that there is a certain area missing from the saddle. Contrast this with the saddle that came off my bike, the Specialized Henge. 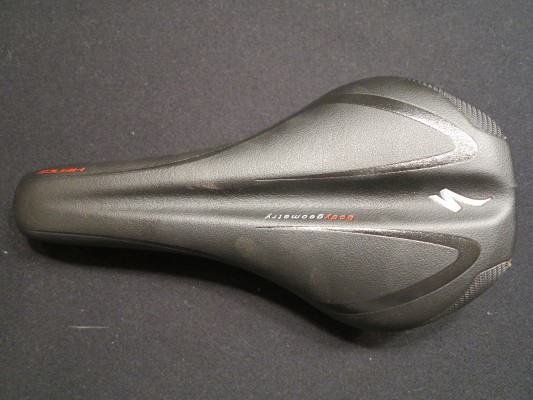 You will note that the Henge also has a channel down the middle, which is no doubt an effort to address the same crotchal concerns as the Max SLR Gel Flow. The two approaches vary widely in intensity, however, one being akin to a handgun calibre, and the other being a .50 cal Barrett sniper cannon, which is used by our armed forces to punch holes in anything.

Why all this missing material in the middle of the saddles? Well, it turns out that areas of your body require blood in order to be comfortable and function well. That’s why if someone puts their hands around your neck and squeezes, you will pass out, and unless they stop soon after that, you will die.

So you see, a large number of the world’s saddles are literally performing a chokehold on your taint, also known as the bottom bracket of the body. Your taint needs blood just like an engine needs oil. Without it, bad things happen.

Here is the Max SLR Gel Flow on my bike, getting ready to head out for a ride: 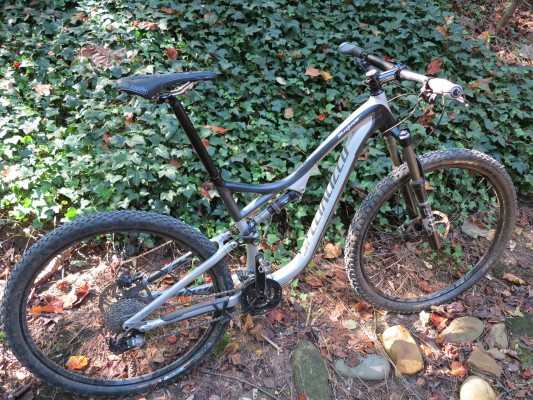 I think the saddle looks pretty dang good on there, myself, and it even weighs a little less than the stock Henge. Selle Italia claims the Max SLR Gel Flow weighs 270g, but my scale had it at 252. I assume they claim a slightly heavier weight so that manufacturing variance won’t cause an individual saddle to weigh more than their claimed number, which would probably cause a weight weenie’s head to explode. 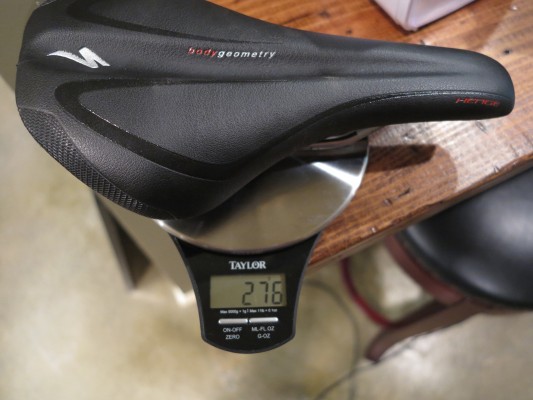 What does a difference of 24g mean? For a fat guy like myself, not a lot. My pinky fingertip probably weighs that much. Still, if you can’t be fast — because you are lazy, for instance, or you just love beer–the only way to get attention for your cycling habit is to have lightweight, expensive gear. Every gram counts in the race to appear pro for those of us who lack the ability to excel in an actual race.

For my physical test of the Max SLR Gel Flow, I chose the least comfortable bibs I own. I also used none of my customary Dz Nuts chamois cream, which I normally put on every single day whether I ride or not. Yeah. I went hardcore. I’m not afraid to put my taint on the line for science, let alone for cycling as a whole.

I pushed my friend Brian into my truck, loaded our bikes up, and headed up to the Blanket’s Creek mountain biking area to put the Max SLR Gel Flow through it’s butt-supporting paces. I must say, all kidding aside, that it is quite comfortable.

When I get tired on a mountain bike ride, which I do almost immediately upon turning the pedals a few times, I start getting lazy about standing up to go over roots and rocks and other assorted obstacles. That means a lot of sitting. I could tell a big difference between the Max SLR Gel Flow and the stock saddle, chiefly because having all the material gone from the middle of the saddle is so nice. My sit bones sit on the padded areas, but I didn’t have a lot of other padding choking my taint.

I’m glad to have gotten my hands on a saddle that respects my taint so much. Thanks for the hard work, Selle Italia!

Props to Selle Italia for providing this saddle for review.