This just in from the Taipei International Cycle Show, via WTB:

The High Tail saddle was developed as a direct request from Pivot Cycles, who identified an emerging need for a purpose-built saddle while designing and refining their upcoming carbon 27.5” downhill bike.

Be sure to note that Pivot is developing a 27.5 downhill rig! Now, on to the saddle. 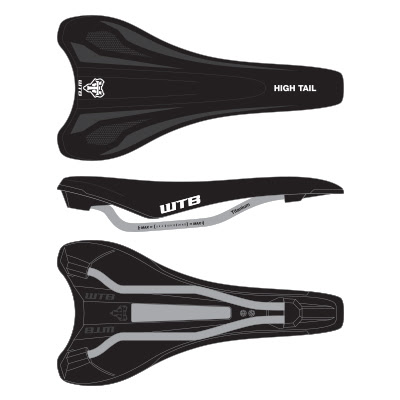 According to Chris Cocalis, Pivot Cycles founder and president, “We wanted to maintain the same travel, chainstay length and rider positioning as on our current 26” Phoenix DH bike and this presented an overall clearance challenge with current seat and rail profiles. Something had to give, so we contacted WTB with the idea of a saddle to accommodate the rising popularity of the 27.5” full suspension market.” WTB anticipates that this new saddle design will be useful on long-travel 27.5″ trail and all mountain bikes as well.

Also, WTB unveiled carbon-railed versions of their popular Volt and Rocket V saddles at the Taipei show, both retailing for $249.95, as well as 142 and 150 width saddles. These new saddle versions also have an anticipated availability of September.

I wish WTB would bring back the Shadow V. All my bikes have WTB saddles (Shadow V, Volt, and Rocket V) but the Shadow V is my favorite of the bunch by far. Been riding the same one for nearly 7yrs now, it’s just a matter of time before it dies….

So if regular saddles don’t have the rear cutout, it’s presumably because your butt rests on that area. And if your butt is in the area and the tire is spinning through that zone when you take a big hit, won’t you get a skid mark on your rear end? 🙂

I would probably invest in some reinforced shorts if I were running this saddle on that bike.

I actually have this issue on my 26″ wheel DH bike.

Ah, right–you probably won’t be seated in that situation.