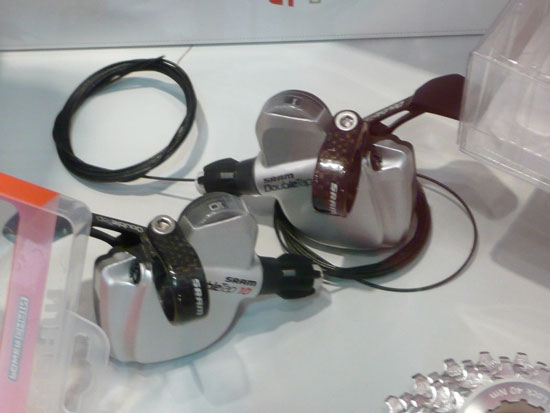 SRAM officially announced the high-end XX mountain bike component group will be available in mid-2009 but is remaining pretty tight-lipped about details. The word is that the XX group will draw technology and development resources from Rock Shox, Avid, and Truvativ divisions to produce seriously lightweight and durable components. From SRAM:

Next summer, SRAM, RockShox, Avid and Truvativ will jointly launch an MTB group called XX. The group will exceed the demands of the cross-country athlete through all-new technologies focused on precision, efficiency, and weight.  Further details will not be released until a global launch during Summer 2009.

Cycling News reports SRAM isn’t saying more about XX to prevent a competitive response from Shimano who is rumored to be developing a 10-speed mountain bike cassette/derailleur system. If the internet rumors are to be believed SRAM’s XX moniker may hint at a 20-speed drive-train system (2×10). To many recreational riders with 27-speed set-ups this may seem like a big step backward but in terms of weight, less is more when it comes to expensive mountain bike components. In fact serious road cyclists prefer the 2×9 set-up as it provides plenty of gearing options without the added weight of a granny gear ring up front.

Beyond the gearing of the XX group, rumors also point to the use of lightweight materials like carbon and ceramics to make things even lighter. Add up the lightweight materials and the “high-end” label from SRAM and you have the potential for some seriously expensive mountain bike gear. Look for more information leaks in the next few months ahead of the 2009 launch – we’ll keep you posted!

Culture
Welcome Back Freeride with the New Nukeproof Giga, in 27.5...
Videos
Video: Tour de Great Himalaya Trail: A Taste of Mountain...
Progression
What Are You Afraid of? [Survey]
Community
Oakland Victims Recount Mountain Bike Robberies and Share How They're...