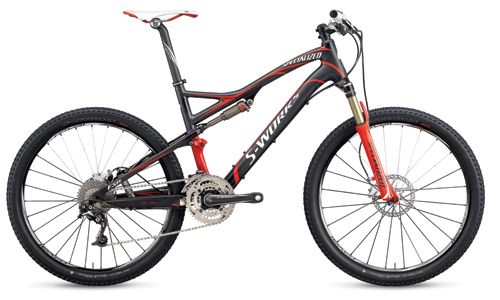 Outside Magazine ran an in-depth article about the development of the 2009 Specialized Epic S-Works that’s well worth the read, though sadly it’s only available in the print edition. According to the article Specialized set out to completely redesign the popular Epic mountain bike about a year and a half ago with the goal of winning the cross country mountain bike world championship (which they did with Christoph Sauser in September).

Reading the article really gave me a feel for how much engineering goes into today’s modern mountain bikes. Of course most of us can’t afford an $8,500 mountain bike but the cool thing is that today’s tech will eventually find its way into mid-tier bikes and eventually the low end. Just look at dual suspension mountain bikes – just a few years ago few could afford a bike with rear suspension and even those who could found themselves bobbing up and down on climbs. Today dual suspension cross country bikes are the norm and pedal bob has been all but eliminated. The same goes for aluminum frames – in the 1990s most mountain bikes were still made with steel or chromoly frames but today you can even find aluminum frame bikes at Wal-mart.

The Specialized S-Works Epic makes the most of today’s buzz-worthy materials and components: carbon fiber frame, carbon cranks, and proprietary front and rear suspension developed internally by Specialized.  The front fork has suspension in just one fork tube to save on weight (a lefty with a “fakey” if you will) and the rear suspension utilizes Specialized “brain” technology to engage the suspension only when it’s needed (not when you’re climbing). The default build on this bike comes in at 21.7 pounds, almost 1.5 pounds lighter than the 2008 model.

Specialized’s Christoph Sauser ended up modifying his Epic S-Works even further by switching to grip shifters (lighter weight) and thinner, feather weight brake rotors to eek another 2 pound savings out of the bike for the 2008 cross country mountain bike world championships. Sauser, who had never won a world championship (two second place finishes and a bronze in the 2000 Olympics) ended up winning by a whopping 3 minutes on the S-Works Epic. This time perhaps it was about the bike 😉