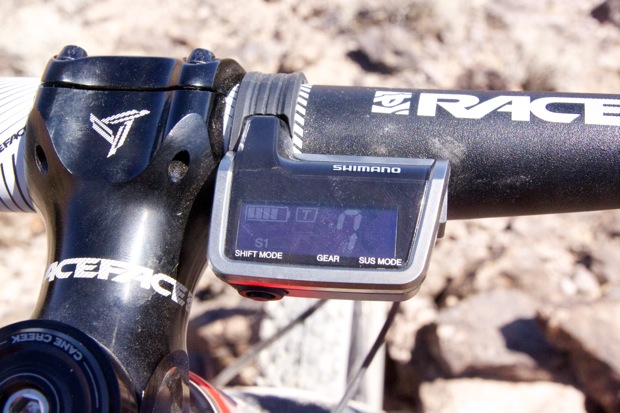 Di2 is Shimano’s electronic shifting system and the technology recently made its way into the company’s XTR mountain bike drivetrain line. I got a chance to test one of the few mountain bikes equipped with Di2 at Outdoor Demo on Tuesday–a Rocky Mountain Element–and here’s what I learned. 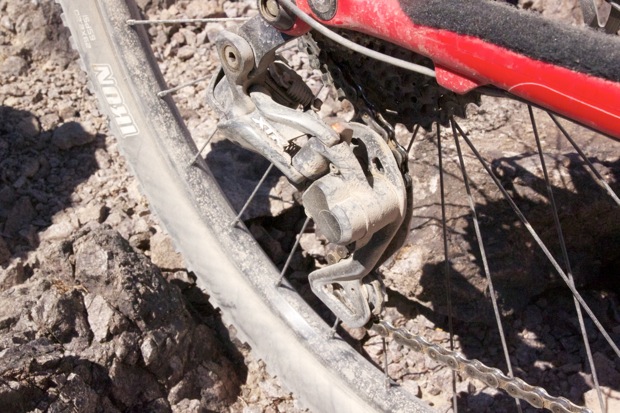 Di2 features a “crash recovery mode” and electronic controls that act as barrel adjusters, used to make minor adjustments to the derailleur. When I picked up my test bike the rear derailler was out of adjustment (due to riders fiddling with the controls) but getting everything back into shape was a matter of clicking a few buttons and letting the servos do their work. The Shimano tech I spoke with says the derailleur features normal limit screws for installation and for making big adjustments but the electronic head unit can be used to make minor tweaks.

The set-up I tested featured two rings up front and an 11spd cassette in the back. In my experience, drivetrains with a front derailleur can be tricky to dial in, especially for the extremes, and even more so with 11 narrow gears in back. The Di2 handles this situation with ease and got itself into the right gear every time without any rubbing or noticeable cross chain complaints (though it does warn you that certain cross-chain gear combos aren’t recommended.)

The battery is smart

One of the first questions most mountain bikers will raise with an electronic shifting system like Di2 is, “What happens when the battery dies?” Shimano thought through this a bit and in addition to providing a long lasting battery (months of use for most mountain bikers), they also include smart features like eliminating front shifting once the battery gets down to 15% capacity. It turns out the front derailleur servo uses the most power and by limiting its use in low battery situations, riders get a better chance at making it back to the trailhead with most of their gear range in tact.

Many manufacturers are designing their frames to allow the Di2 battery pack to be mounted internally within the frame. The Rocky Mountain Element I tested actually had the battery pack mounted on the outside of the frame so I got to see just what the thing actually looks like. The battery itself is a sealed lithium ion despite a case shape that looks like it might accommodate AAs.

Coming from a traditional shifting system, I found Di2 requires a bit of a learning curve. First, the shift buttons on the unit I tested were reversed so the bottom button moved into an easier gear while the top button moved into a more difficult one. I imagine it’s possible to set up the buttons however you like (it is driven by software after all) but I can’t confirm. 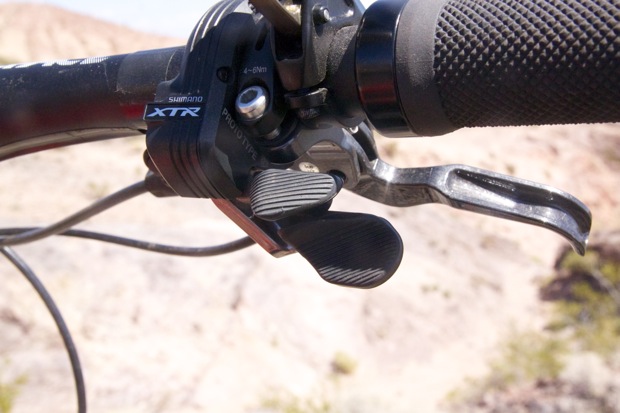 When you reach the end of your usable gear range, the Di2 makes a beeping noise to let you know you’re out of gears. However, the shifter button continues to click, unlike a traditional shift lever that simply won’t click any more. I’m sure this is something riders will just have to get used to but it’s interesting to realize the types of signals we expect from our shifters after decades of conditioning.

The main head unit displays the gear number for the rear derailleur each time you shift and fades after a few seconds to conserve the battery. It didn’t seem to display the gearing for the front, though a quick look straight down lets you know where you are (duh). In addition to the screen, Di2 uses various audible tones to indicate things like when you’re out of gears or you’re cross chaining. I didn’t get a chance to learn all the tones but I imagine over time they become quite useful, especially when it’s too sunny to see the screen or too dangerous to look down.

Weights on the Di2 system are roughly in line with mechanical drivetrain systems, though an exact comparison depends on how many gears you’re running, how the shift controls are set up, etc. During my test ride I found the system to be noisier than a normal drivetrain as the servos make a high pitched whining noise each time they whirl into action. This is in addition to normal shifting sounds like clicks and chain movements between gears (see video above).

Based on my admittedly short test ride with Di2, I have to say I’m not quite a believer yet but I’m excited to see how the technology progresses. As Shimano tunes the system for mountain biking there are some interesting opportunities for things like Syncronized Shifting and integration with other sensors on the bike. I can’t wait to see what’s next!

For the manufacturers who put the battery pack inside the frame, does that mean when the battery eventually wears out, you need a new frame?

I was wondering the same thing. Is there a trap door to replace the battery? That thing looks heavy, and expensive. I love Shimano. I love innovation. But this drivetrain makes me want to close my eyes, and wake up in 12 years to find one that is powered by a CR123A and weighs only .043 grams.

Yeah, there’s basically a trap door for inserting/removing the battery. Just hope it doesn’t allow too much water into the frame. 🙂

Another solution to a problem that does not exist. These bike companies are getting a little ridiculous in their fleecing of our wallets. $$$$$$$$

Constantly adjusting a derailleur is one of the pleasures of cycling, I can’t believe Shimano have abstracted this to some soulless electronic control system. At least we still have the problem of a completely exposed drivetrain that wears out in a matter of months.