The Guide series is SRAM’s definitive answer to problems with the Elixir product line that turned many riders toward competing brakes over the past couple of years. SRAM worked hard to overcome that reputation, and engineered the Guide Brakes to have surefooted braking power with deft modulation, increased adjustability, and a quiet rotor that dissipates heat better than ever.

The Guide RSC brakes, a top shelf offering, incorporates Reach Adjustment (R), Swinglink (S), and the Contact Point Adustment (C) for an MSRP of $208, with an RS and R version available for less (and a recently announced Ultimate version with carbon bits that costs more). In addition to those features, SRAM completely redesigned this brake in an attempt to outperform itself, and it’s principal competitor, Shimano. I believe they succeeded.

I was fortunate enough to test these brakes for a few weeks on both my Salsa Beargrease and my Pivot Mach 6, in both Colorado and Utah. Both bikes require precise stopping power and modulation for different reasons. The fatbike, because of it’s voluminous wheels and the inertia it generates when I’m hauling the mail, and the Mach 6 because I ride it as hard as I possibly can every time I throw a leg over it. The Colorado front range and western slope (plus Moab) are great places to test brakes. Terrain is brutal, and often very steep and technical, requiring reliable stopping power all the time in conditions that often change throughout a ride. It is common for me to go through 2-3 sets of brake pads in a season. Also, when it’s dry the fine dirt and sand is exceptionally hard on pads, rotors, pistons, and any exposed parts. These Guide brakes were put through the ringer in every condition, even in the snow and with single digit temperatures–on the same steep and gnarly trails. 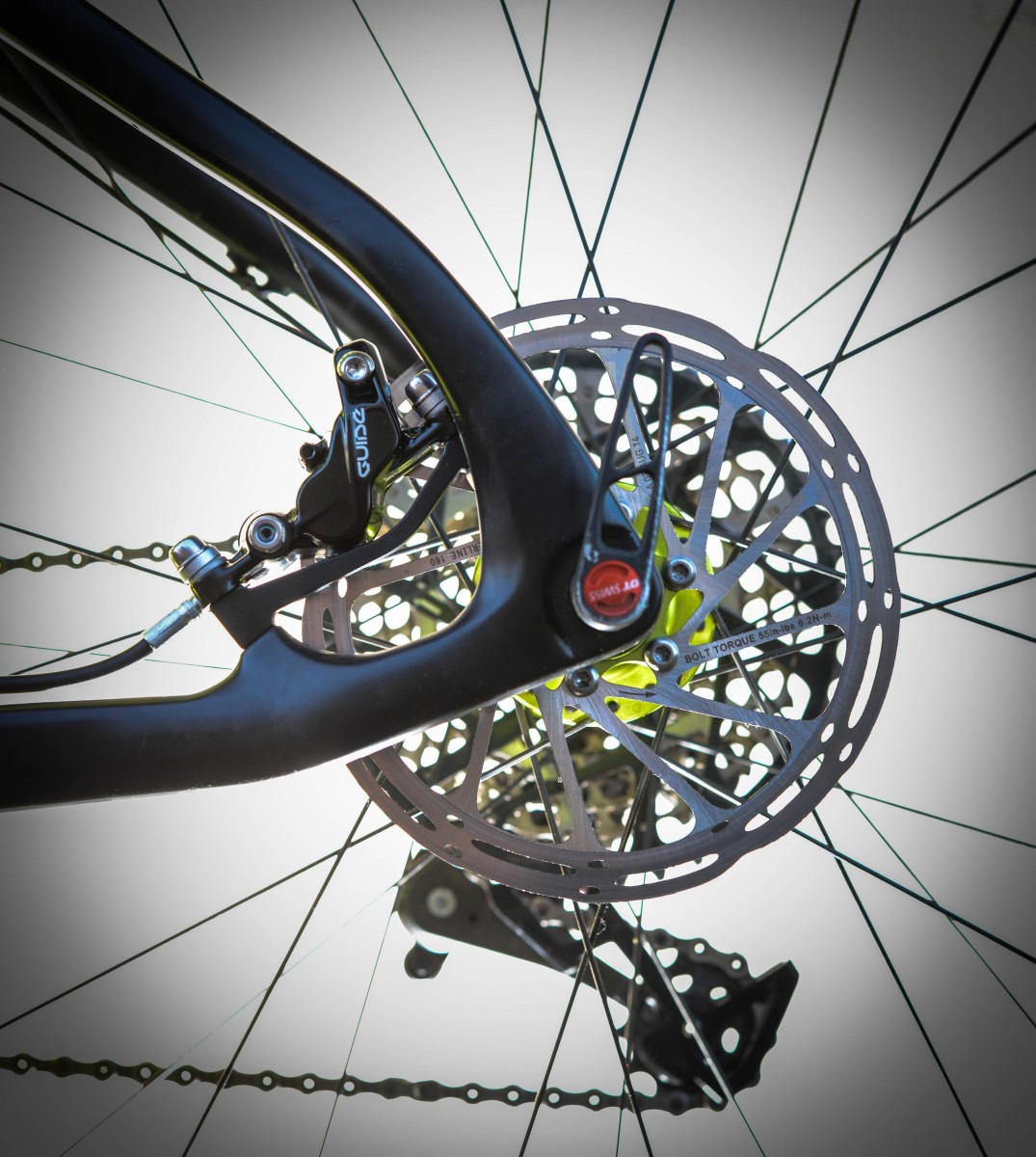 I know the question on everyone’s mind is how do these brakes compare to the tried-and-true Shimano XT brakes, which I ran on my previous bike for the past two seasons. The answer: though they seem to have the same amount of end-result stopping power, the XTs are definitely more grabby at first, while the Guide RSCs have noticeably better modulation. Because of this, the Guide RSCs may feel less powerful in the first part of the stroke if you are used to the “on/off” feeling of most other brakes, but you can also overcome this by using the R-S-C settings. I still think that the XTs are great brakes, but as a testament to how impressed I was with the Guide RSCs, I ordered them on my new Mach 6 instead of XTs–and the fact that both of my bikes have great brakes that feel the same all the time is a reassuring feeling no matter what I am riding. I also tested a few bikes at Outerbike and at demos that had a version of the SRAM Guide on them, and all of them felt exactly like my own brakes. Again, a sign that SRAM has made a reliable and consistent product.

I think it’s pretty clear that I was impressed with these brakes. I love the fact that they are reliable and very easy to adjust. Even during steep descents where I could smell the brake fluid heating up, they did not fade or falter. The pads have held up well even after several weeks of heavy use. For the money, these are hard to beat considering how much power, modulation, and adjustability you get.

Thanks to SRAM for sending these over for review.

I was considering these until I saw that they’re more expensive than XTs. I’ll just go with the tried and true, and cheaper brakes.