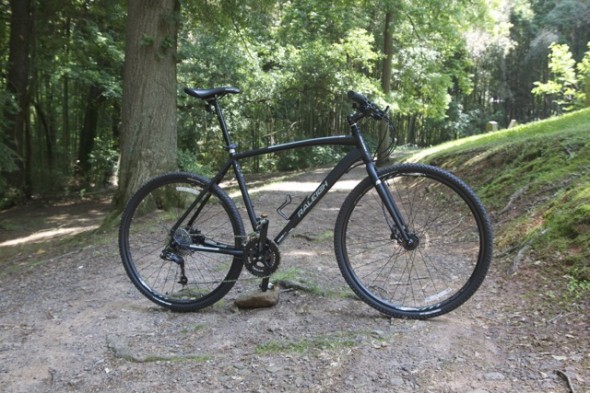 To folks who don’t mountain bike, all bikes look the same. That must be true, because so many friends have said to me: “You run a mountain biking website. Which hybrid bike should I buy?”

I guess my friends and others are convinced they should get a bike that “does it all” since they really aren’t sure what they want to do.  And that’s fine. In my experience, it’s really tough to convince a friend to plunk down the cash for a dedicated mountain bike if they’ve never ridden off-road and envision (among other things) riding with their significant other to get coffee on the weekends.

Case in point: a friend recently approached me for a hybrid bike recommendation since he and his wife wanted to get into riding. I asked him what he had found so far, and he admitted most of the hybrid bikes he saw didn’t look very cool. Indeed.

Coincidentally, I was introduced to the Raleigh Misceo just a few days later, a bike that seems to defy the negative hybrid bike stereotype in terms of both looks and performance. Raleigh calls it an “urban/trail” bike as a part of their “lifestyle” line. Clearly, this isn’t your mama’s hybrid.

Looking at the Raleigh Misceo from a distance, you’d be forgiven for thinking it was a flatbar cyclocross bike thanks to the oversized wheels and skinny, knobby tires. Heck, if you squint enough it even looks a little bit like a mountain bike. The all-black, murdered-out version I tested doesn’t sport the typical bright and happy colors I’ve come to expect from a lifestyle bike. 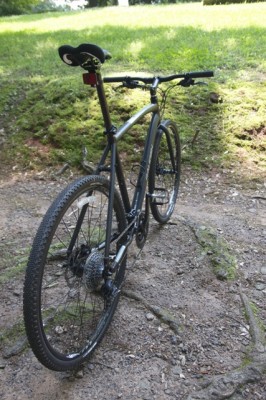 Up close you’ll recognize many familiar parts on the Misceo: disc brakes, Kenda Slant Six tires (the same pattern I run on my mountain bike), a 2×10 drivetrain, and mountain-style handlebars. Oh, and the wheels are 700c, which is basically just fancy roadie speak for 29er. The bike I tested comes equipped with a rigid chromoly fork, but the “Trail” version of this bike includes a suspension fork.

The good folks at Raleigh recommend riding this bike on paved or gravel/dirt roads, but we all know that isn’t as much fun as shredding singletrack. Besides, plenty of people ride rigid singlespeed mountain bikes and absolutely kill the singletrack, so it’s not always about the bike, right? 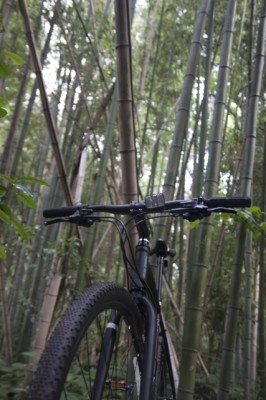 On the road the Misceo feels super stable and makes riding a straight line a cinch. The tradeoff, however, is that it feels a little sketchy cornering on singletrack, especially given the skinny 1.5in tires.

The brakes felt adequate for my needs, and the bike handled chunky gravel roads at high speed more comfortably than I first thought it would, given the rigid fork and aluminum frame.

More than anything else, I’ve been using the Misceo for commuting, which has been great. It’s nice to have a dedicated commuting rig with flat pedals and a lower stand-over height for navigating stop-and-go traffic. The fact that the Misceo can handle off-road cut-throughs just makes it an even more efficient commuter. 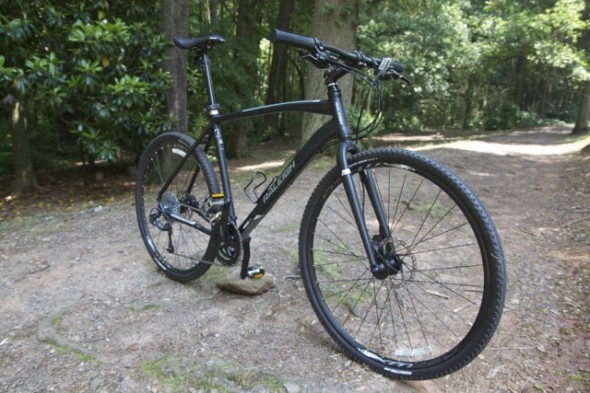 My test bike is an XL frame and weighs about 30 pounds built-up, which is a bit heavier than it looks. The upshot is this is a durable build which shouldn’t require a ton of maintenance to keep it up and running.

Bottom line: If you like to carve a little urban singletrack on your ride to work or you’re looking to get a friend into a slightly more aggressive “do it all” bike, the Raleigh Misceo should fit the bill. The Misceo 3.0 (tested) retails for around $800.

Now for the cool part: for the first time ever, our readers have the chance to win the bike in this review! Next week, our semi-annual trail contest kicks off, and the grand prize is this bike, the Raleigh Misceo (XL). It really is a great bike, and even if it’s not your size or style, think of the kudos you’ll get for giving it to a friend! Look for contest details next week.

Thanks to Raleigh USA for providing the Misceo for review and giveaway.

I got to see this bike in person, and I was quite surprised at how sleek and aggressive the frame looked for a commuter bike. I definitely wouldn’t mind pedaling my way around town on one of these!

Ditto.
I gave my commuter bike to my daughter when she went to college. That looks like it would fill the hole in my stable quite nicely.

Why do you commute on flat pedals rather than clipless?

Because I don’t want to wear shoes with cleats all day or have to change my shoes at the office. Also, it’s only a mile so I don’t need the added efficiency.

Actually today I rode in on my MTB with Eggbeater pedals–in flip flops. Ha!

Eggbeaters + flip-flops is how I broke a finger last summer … 😀

Check out Keen, they have some awesome commuter shoes that are clipless compatible, but perfectly appropriate to wear around the office all day.

Yeah, I have a pair of Keens but not an extra set of pedals. Also, I still have to change shoes–I’m too busy for that. 🙂

Some would argue that no Keen is ever fashionably appropriate, especially in an office. I could care less, but my wife HATES the look of Keen shoes LOL.

And, this is the Singletracks office, so I’m assuming the dress code isn’t too strict.

That’s a cool bike, I like that it has a rigid fork instead of suspension. Saves a LOT of weight (especially at this price point!!) and it’s not needed for the kind of riding this is designed for.

I just bought this bike about a week ago. It is perfect in every way.