WARNING: The battery pack of a light of similar construction has been known to ignite while charging, causing a fire that destroyed a home. 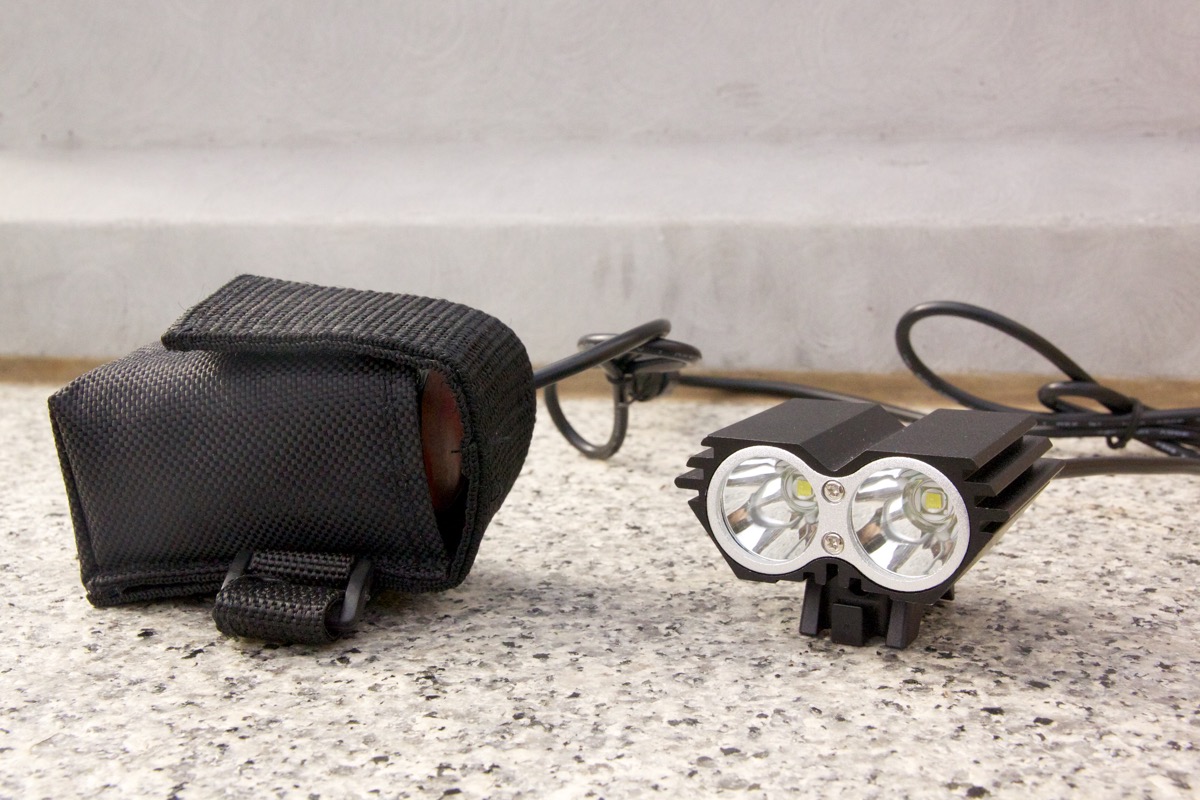 Back in January I attempted to review a sub-$20, 5,000 lumen bike light… but the light never arrived. In case you were worried, I did manage to get my money back from Amazon, so all is well. I also followed up on the advice of our readers and placed an order for a similar light from a more reputable seller. This time I paid $24.99 which is almost 50% more than I paid the first time around, but the important thing is, I got my light this time!

The “IMAGE® 2x CREE XM-L U2 2 LED 5000 Lumens Waterproof Bike Cycling Bicycle Light Headlamp HeadLight 3 Switch Mode with Battery Charger” (yes, that’s the full name from Amazon) shipped with a charger, battery, and two O-rings. The head unit is actually much smaller than I thought it would be, especially compared to my NightRider Pro LED 2200 shown above.

First, the things I like about this light. The light is easy to use and attaches to handlebars easily enough with the included O-ring. The light is simple to operate and the battery life is actually pretty good (about 2 hours on high at room temperature). Charging is a little slow (9-10 hours from empty) but not a big deal if you plan ahead. The light and battery are also lightweight (283 grams with the O-ring) and clearly you can’t beat the price.

Now, here’s where I found this product cuts corners:

The light isn’t as bright as claimed–not even by a long shot. Using a light meter, I tested this light and compared the results to several other lights. Based on my tests, this light is not quite as bright as a Light & Motion Seca 800 (that’s 800 lumens) despite its claim of 5,000 lumens. As you can tell from the previous NiteRider comparison shot, the LEDs aren’t nearly as large as those found in other lights. The two photos above show the IMAGE 5000 on high compared to the 3,000 lumen TrailLED DS. Believe me, 3,000 lumens is VERY bright (look for a full review of the TrailLED DS soon.) 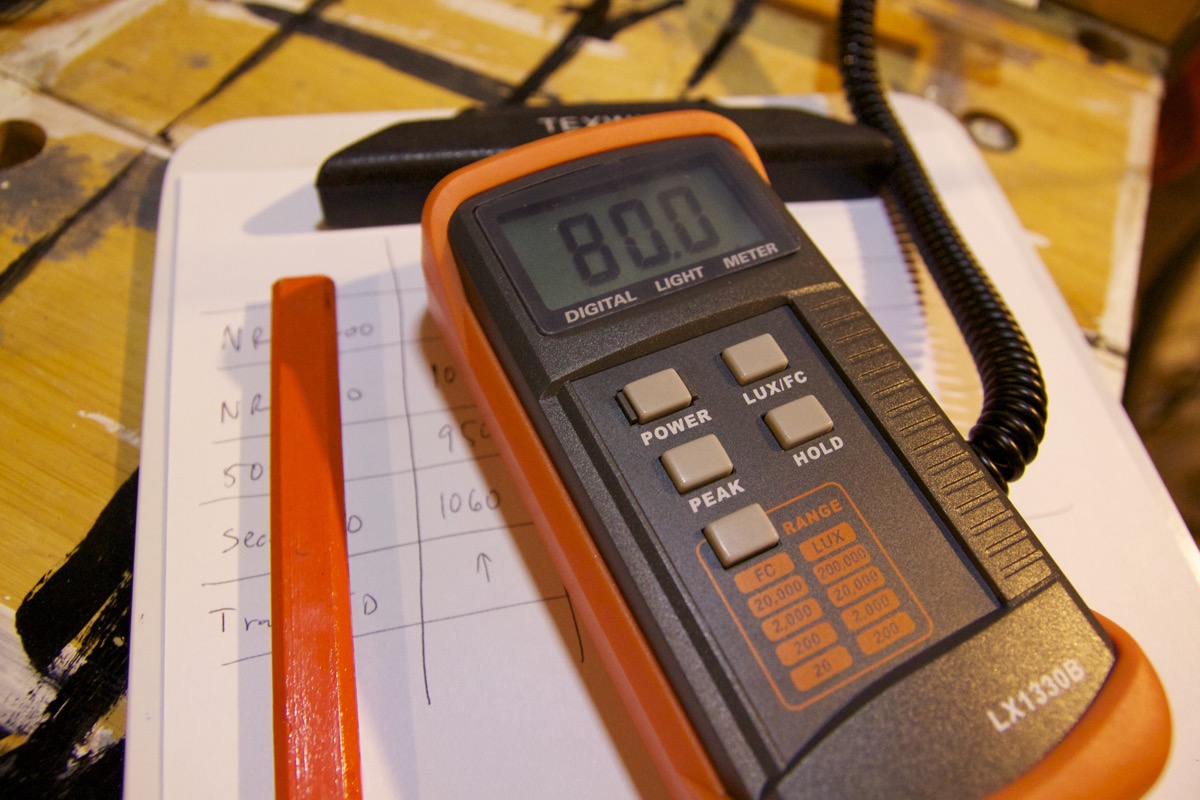 The beam pattern is not tuned in any way, and is basically the same thing you’d get with a flashlight. Again, I compared this light to several others, measuring the beam shape and size, and found the IMAGE 5000 was the only one that produced a perfectly round beam pattern. The actual size of the beam (spread) was fairly average compared to others but as you can tell, on the trail this translates into a focused beam with the sides of the trail left dark. Also, compare the IMAGE 5000’s smooth reflectors in the photo with the NiteRider 2200 Pro Race light’s dimpled reflectors.

The entire body of the light acts as a heat sink which is efficient when you’re moving but a burn hazard when you reach to turn it off. It does, however, save weight versus having an added burn guard over the heat sink. 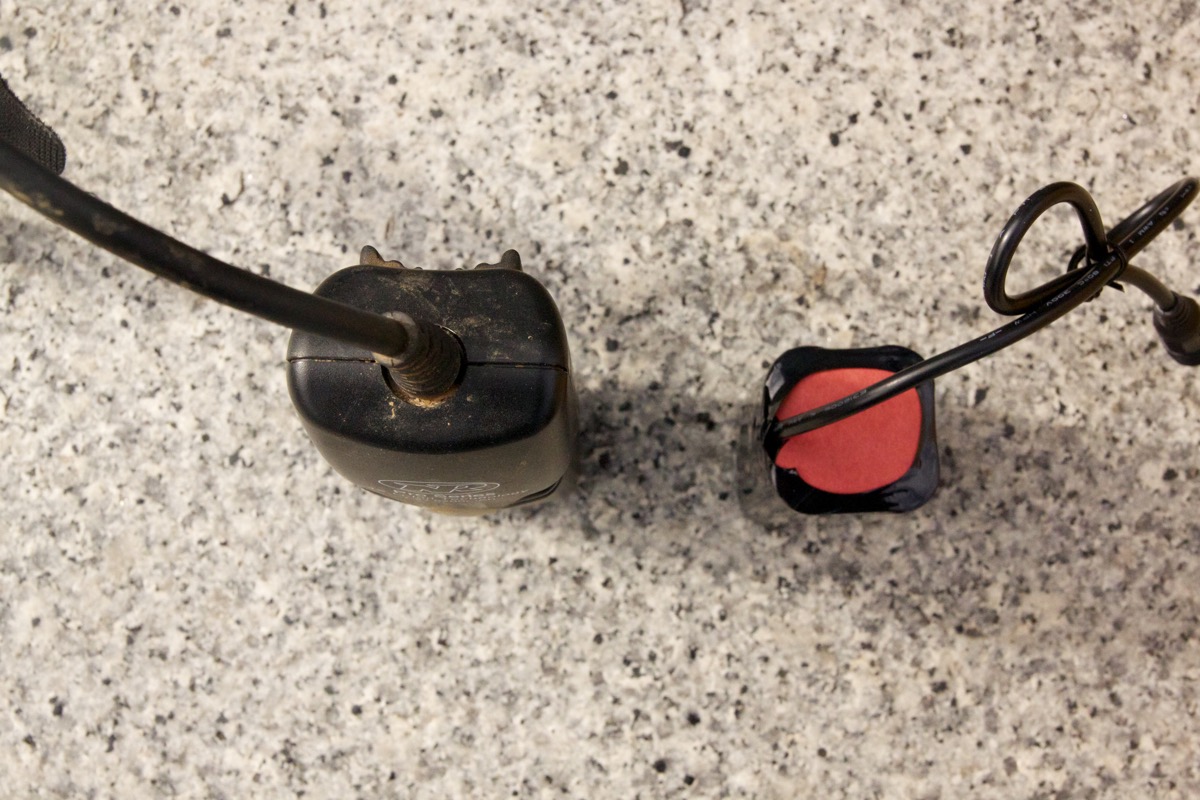 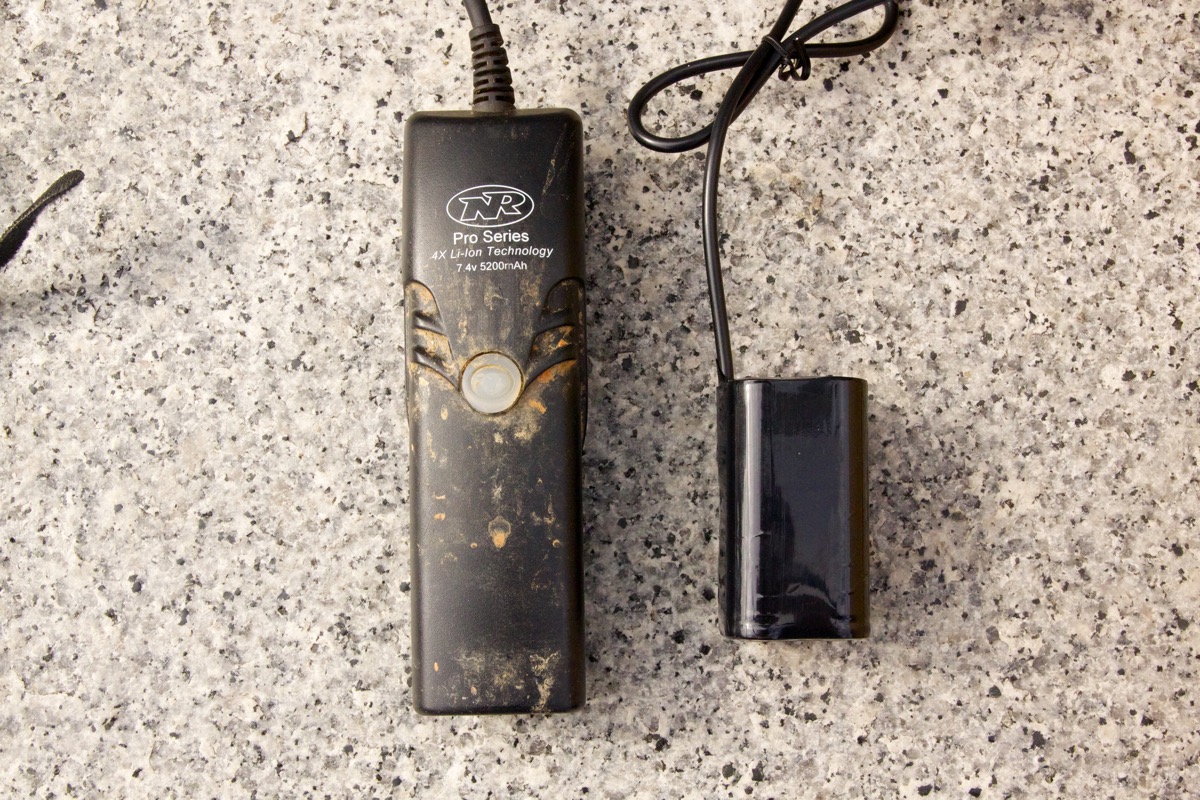 The battery is not sealed. There’s a little electrical tape wrapped around with a piece of cardboard stuck on top, so I won’t be using this light when there’s any chance of rain. Compare to the sealed and much larger battery from NightRider. Stream crossings could also be dicey if you have the battery strapped to your frame. Stashing the battery pack in a jersey pocket will expose it to sweat, which is potentially more troublesome than water due to the high salt content. 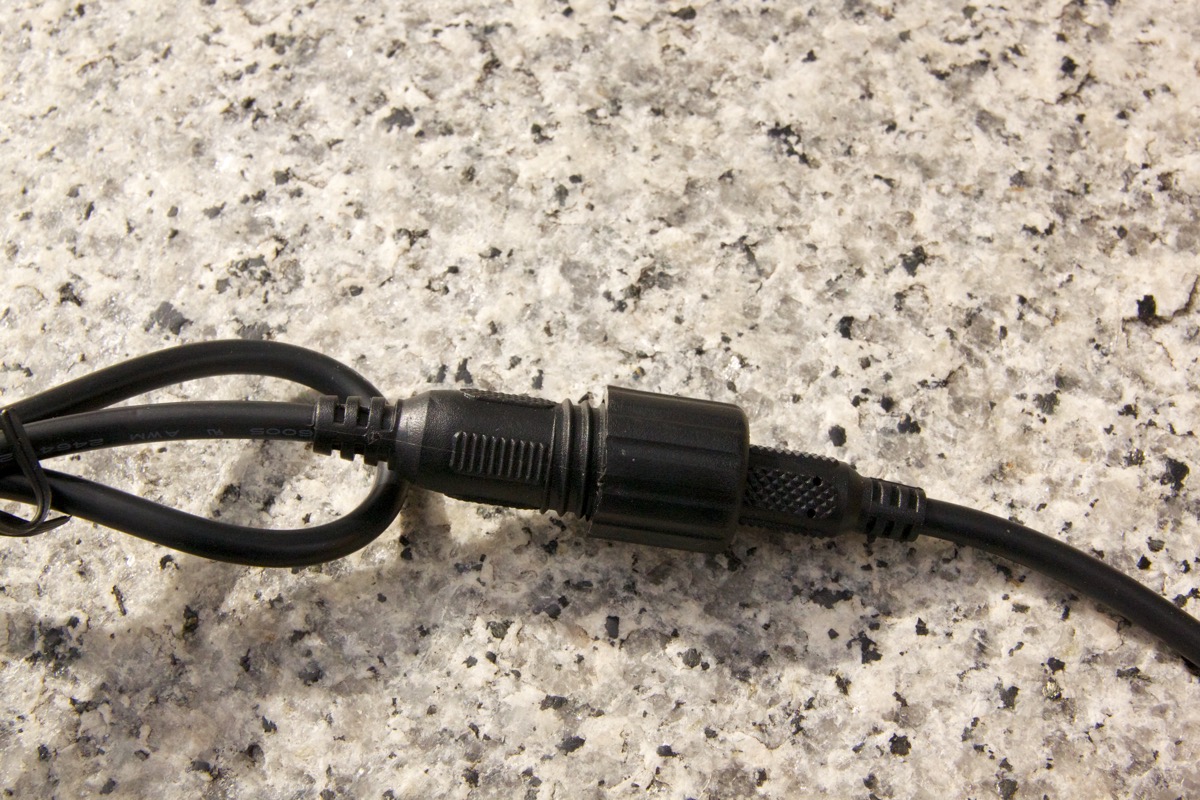 The cables use screw connectors. This was probably done to keep the cables attached since the tolerances on the plugs themselves aren’t very tight, but with a screw connection, you’re just asking to be pulled off your bike when a limb snags one of your cables. Getting yanked off your bike by the head can be a bummer, which is why almost every other light I’ve tested doesn’t use this type of attachment system.

There is no helmet mount included. You can pick one of these up online, and if you already have a helmet mount from another light it will probably work. Basically all you need is a horizontal bar to wrap the O-ring around.

Clearly the branding could use some work as well, though I suppose that isn’t really the consumer’s concern. Still, it’s tough to recommend a light to a friend that doesn’t even have a simple name. One of the reasons brand names exist is to inspire confidence in the consumer that if there’s a problem, someone will stand up and take care of them. If anyone’s looking for a brand name here, I propose calling this light the Johnny Five since it reminds me of the robot from the 80s movie Short Circuit.

Finally–and this is just a personal gripe–the IMAGE 5000 power button is illuminated whenever the battery is attached. I suppose this is to help the user find the power button in the dark but to me it screams, “wasted battery power.” When I turn my light off during a ride, it’s to make sure my light lasts the whole time. The indicator probably only uses a negligible amount of power but still, I’m not stoked about it. The MagicShine light I own does the same thing, and it’s a real bummer when you see the indicator fade from green to yellow with the light turned off.

Is this light worth $25? Yes. Is it a good choice for mountain biking at night? Perhaps. If you had two of them and you didn’t plan on riding fast or going for a long ride, I could see this being a decent choice. It’s not a light I’ll be taking on my weekly night rides, but as a second backup or a loaner for an out-of-town friend, it’ll work.

WARNING: The battery pack of a light of similar construction has been known to ignite while charging, causing a fire that destroyed a home.

I commented on your initial post about a bad experience with cheap Chinese lights and noted “never again”. Well I rethought that and bought one of these same lights.

Your review is spot on with my experience, down to the inconsistent battery life lights. For the money this is a good light. I will probably use it for road riding in the winter and stick with my Magicshine lights for trails. The Magicshine has a wider beam and longer life. But this would probably work fine for many people, especially as a road/ commuter light or a backup and/or supplemental trail light. I would not go on a trail ride with this as my only light though( maybe would with two of these, with is feasible considering the price)

I plasti-dipped my original Magicshine battery pack and it has held up well.

I recently bought a Yinding light that has a battery pack identical to the reviewed light, and it actually separated at one of the tack welded points and no longer functions. Fortunately it’s a pretty standard design and replacement lights are cheap.

There’s nothing like ripping singletrack at night with your hydration pack on fire….

I’m all for saving a buck, but this doesn’t seem to be a good way to do it.

Totally agree, and I ride at night enough that it isn’t worth the risk either.

My advice is; support the “real” bike industry manufacturers and spend the “realistic” amount of money on a “known quality” product. You should not regret buying a high quality product and getting exactly what you paid for the first time. A 20 dollar light is exactly what you will get.