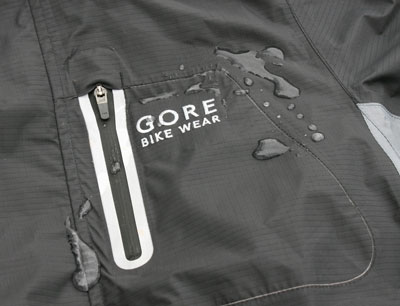 When I was a kid I had this idea for a clear bubble that enclosed my bike so I could ride in the rain and not get wet. Of course the idea wasn’t original and in fact enclosed bikes have been used to break bicycle speed records – but at the end of the day a bubble bike isn’t all that practical. Fortunately Gore has come up with a more fashionable, versatile solution for staying dry on the bike: the Alp-X Jacket.

The name Gore is now synonymous with waterproof breathability and with good reason. For more than 30 years the company has been researching and developing high performance fabrics like Gore-Tex with an eye toward serious athletes facing extreme conditions. The attention to detail in the Alp-X jacket is clearly visible from the expertly taped seams to the double-shielded enclosures. 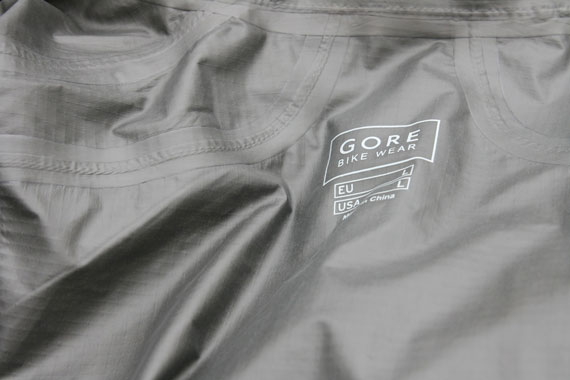 Tightly taped seams inside the jacket.

Although this jacket is versatile enough to be worn on the trail or the road, it really works well for mountain biking for a number of reasons. First, it’s super lightweight and easy to cram into a Camelbak without taking up much space and the jacket can be stuffed into its own rear pocket. My size large jacket weighs just north of half a pound at less than 11 ounces – so light that I usually forget it’s stuffed in my pack (until it starts getting cold or raining).

Now I know what you might be thinking at this point: Aren’t we supposed to stay off the mountain bike trails when it’s raining? I’m definitely a firm believer in staying off wet trails but the fact is that sometimes mountain bikers get caught off guard, especially during epic rides that start in the morning and go until dusk. The Alp-X is the perfect emergency shell for avoiding hypothermia and keeps you mostly comfortable even when you’re pumping the pedals. Although this jacket is very breathable, if you’re like me you’ll probably still sweat a little once your heart rate gets up no matter what the outside conditions may be.

Aside from using the Alp-X to stay dry, I’m finding that the jacket is great for blocking the wind on the trail and on the road. In fact when the air is dry I feel like the Alp-X does an even better job regulating body moisture and smoothing out temperature variations due to climbing / descending / and resting. Even on the coldest days this winter I’ve worn the Alp-X over nothing more than a lightweight long sleeve jersey and have felt great. 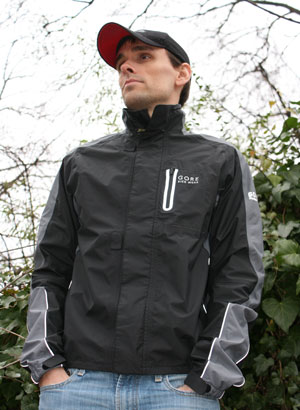 Beyond its solid performance, the Alp-X is a seriously sporty looking jacket and I find myself making more and more excuses to wear it out. Gore claims this jacket has a “Euro fit” which apparently means it’s slim and the zipper pull is on the left. The cut is definitely athletic right down to the “pre-shaped elbows and 3D ergonomic fit.” On the trail this means the jacket doesn’t get in the way when you want to throw down sick moves. The Alp-X also includes velcro wrist closures, an elastic waist cord, and an expandable tail to help customize the fit to your body even further. The upshot? Air and water don’t have a chance of getting inside this jacket unless you want them to. 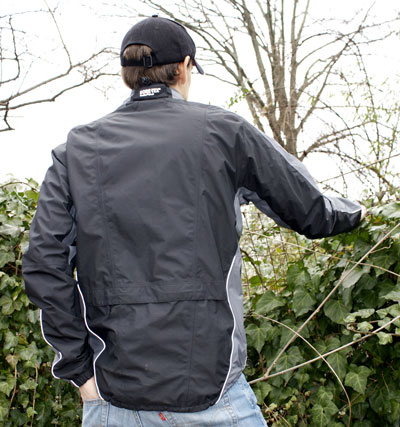 The Alp-X comes is a two high-vis colors but the black and gray version seemed a little more “mountain bike” to me. Before choosing this jacket one of the folks at Gore commented that the black jacket isn’t very visible on the road to which I scoffed – mountain bikers don’t need to be seen. Actually that’s not true (hunters, training rides on the road, etc.) but it turns out this black jacket is very visible at night thanks to its reflective piping and accents. On a recent night ride a friend remarked that the pattern looked like something out of the movie Tron which in my opinion, makes it freaking awesome.

Pac-lite durability and waterproof-ness come at a cost, both in terms of usability and finances. The jacket is crinkly – sorta like a heavy duty garbage bag – which means you won’t be sneaking up on anyone on the trail. Fortunately since this jacket is shaped and fitted, there aren’t too many areas of excess material to flap in the wind while you’re riding. And as you might expect from a rain jacket, the Alp-X isn’t exactly soft on the skin so be sure to don a comfy base layer to avoid direct contact during your ride.

In terms of monetary cost, at $269.99 MSRP this is a fairly expensive jacket. The good news is this is a piece of equipment that will last for years and is guaranteed to keep you dry – forever. So if, in 10 years, you start to notice leaking around the seams on your Alp-X, Gore will repair or replace the jacket at no charge. Considering lifetime costs, this jacket is actually a steal.

Care and maintenance is no big deal for the Alp-X; just toss into the washing machine on warm and let ‘er rip. Dry on medium heat and the jacket is as good as new. In fact, washing and drying the Alp-X actually helps maintain the water repellent finish on the outside so water will continue to bead as soon as it hits the surface.

The Alp-X is probably the closest thing you’ll find to a mountain bike bubble that won’t weigh you down or harsh your flow in the rain. If you’re serious about mountain biking year round, the Alp-X is a great investment that will ensure safe and comfortable rides for years to come.

Thanks to the folks at Gore for providing this jacket for review.

Great article. Yeah I love the reflective material, for such a small piping it reflects a tonne of light.