Hot on the heels of maddslacker’s long-term review of the  3.8in-tired version of Fatback’s aluminum fat bike, I had a chance to take the massive 4.8in version for a spin around the Outerbike test loop. 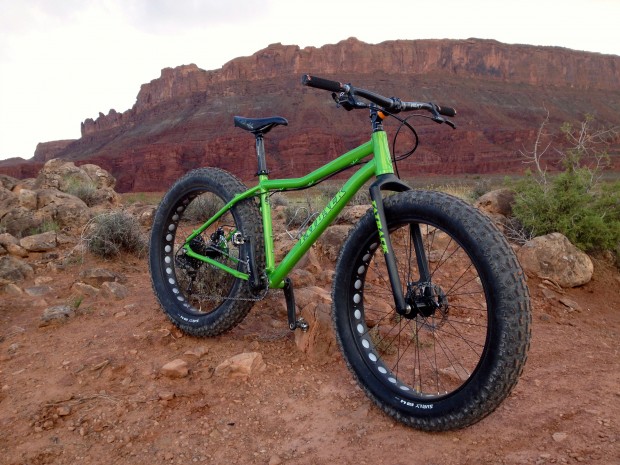 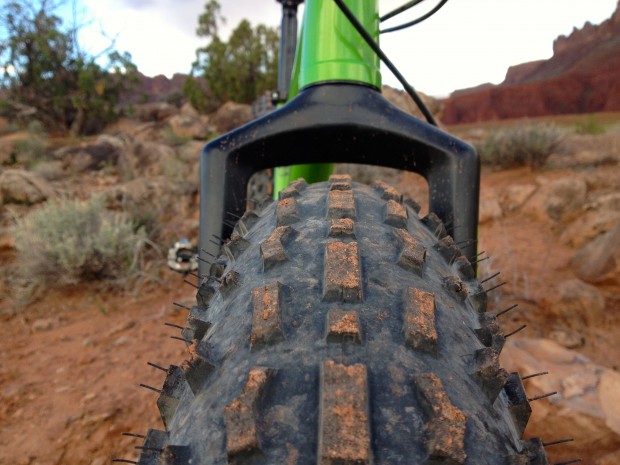 The build I rode featured Fatback’s own carbon fork with through-axle, although several bikes at the Fatback booth (which, coincidentally, was right next to ours) were sporting prototype suspension forks. 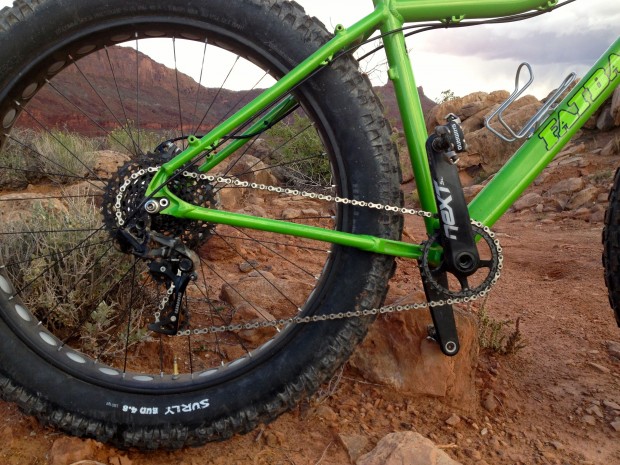 My test rig was running a SRAM X01 1×11 drivetrain. My first time riding a 1×11, and it’s on a fat bike… just a little ironic! This really is the miracle drivetrain: perfect for everyone from cross country, to downhill, to fat bikes. I never lacked for low-end gears (I had way more gears than I needed for the Outerbike test loop) and shifting was crisp, precise, and rapid. I need to spend more time on one of these.

My test rig was also sporting prototype carbon rims. These rims are brand-new, and all I could get from Fatback were ballparks on what retail would be. And yes, you can set these bad boys up tubeless.

Right out of the venue, I decided to see what these fat tires could really do, so I pointed them at the loosest pile of dirt and rocks I could find.

Wait, what pile of dirt and rocks? This bike turns what would be a horrendous, endo-enducing idea on a normal mountain bike into what essentially feels like a packed singletrack trail. Braaap!!! 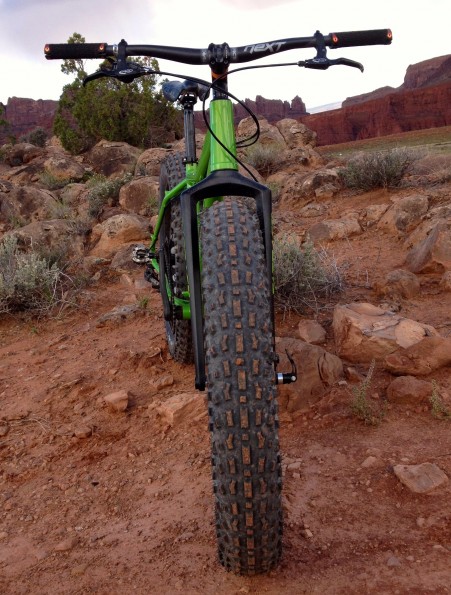 After that little foray I decided to rail some singletrack, to see how it would perform. As maddslacker mentioned in his review, traction was phenomenal! I was able to power up absolutely everything without hesitation.

To test out the resilience of this rig as a trail bike, I pinned it through every rough, gnarly section of trail without a second thought. While yes, the ride wasn’t as smooth as my full suspension rig would have been, it didn’t bobble or get hung up in even horrible line choices. I do think the tires were set up quite a bit firmer out of the booth than most experienced fat bike riders would have ridden them, so I imagine that small bump absorption could easily have been improved with a drop in tire pressure.

The final thing that amazed me about this rig was the traction in the turns. Despite the massive tire/wheel combo, the Fatback didn’t feel ponderous, even in the least. The final descent back to the Outerbike venue features a long section of fast back-to-back bermed turns, and the Fatback just sailed through them, the fat tires humming in the corners with more traction than I could even begin to fathom!

I’ve watched some peoples’ posts on Facebook who’ve purchased fat bikes for winter riding, and suddenly their carbon full-suspension wonder machines are gathering dust all summer long as well. While I don’t think I’m willing to commit to a fat bike as my only mountain bike, after my experience riding the Fatback all I can say is: “I want one.”

Progression
How to Rail Loose or Sandy Mountain Bike Trails
Trails
How to Find the Best Places to Snow Bike
Gear
You Don't Need a Fat Bike For Snow--Just Get One...
Gear
REI Co-op Brand adds an Affordable Fat Bike to the...

My test rig actually has 3.8″ tires, but I’m pretty interested in the Fatback branded 4.25″ ones. Also, I can see from your close-up that your test rig is set up tubeless. I have it good authority that those 5 inchers were seated and inflated with my Lezyne Dirt Floor Drive pump. 😀