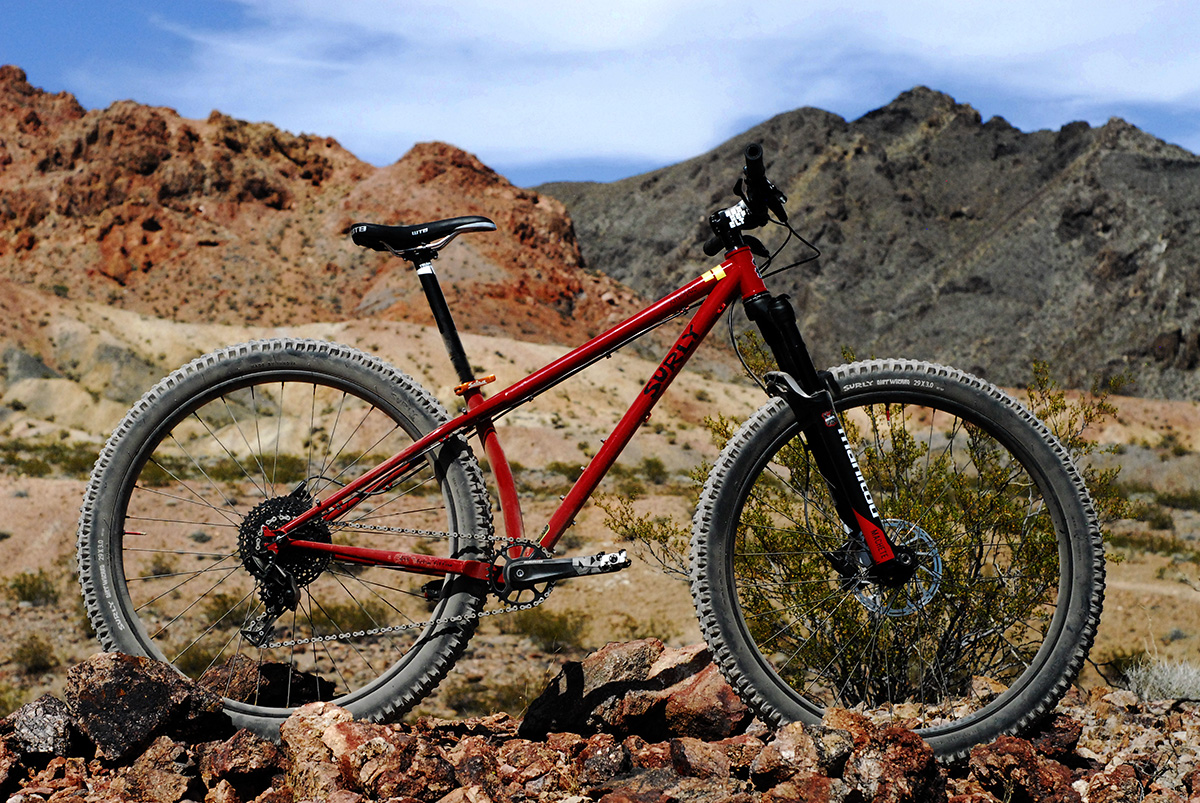 A couple months ago at Saddle Drive, I got the opportunity to check out some of Surly’s recent redesigns for some of their classic bikes, including the Karate Monkey, which I really enjoyed. Here at Interbike, I followed up with the company and tried out the newly-modified Krampus.

The Surly Krampus has been around for 5 years, and when it was launched, it was revolutionary in that it was the first plus bike that became popular on the market. The 29×3″ tires were fatter than normal MTB tires, but not as wide as fat bike tires, which were also really gaining traction (no pun intended) around that time. Back at Interbike in 2012, Greg reviewed the Krampus when 29+ was completely new. Check out his thoughts here, especially if you’re unfamiliar with the bike.

I had ridden the Krampus a few years ago as well, and I wasn’t entirely sold. The bike felt long and lumbering, the wheels too tall for my short body. I appreciated the concept, but it wasn’t the bike for me. Naturally, I was interested to see if my opinion could be swayed with the revamps.

The main changes are very similar to those that Surly applied to the Karate Monkey–geometry tweaks and hub spacing adjustments. The Krampus is now equipped with Gnot-Boost spacing, meaning you can run any hub you want, whether it’s a 135mm quick release, 12×142, or 12×148 Boost.

The geometry changes are designed to make the bike a little bit more playful, as well as accessible as a fun bike for smaller riders, such as myself. The head tube angle was slackened by half a degree (now at 69), and the chainstays were shortened by almost half an inch to 435mm. 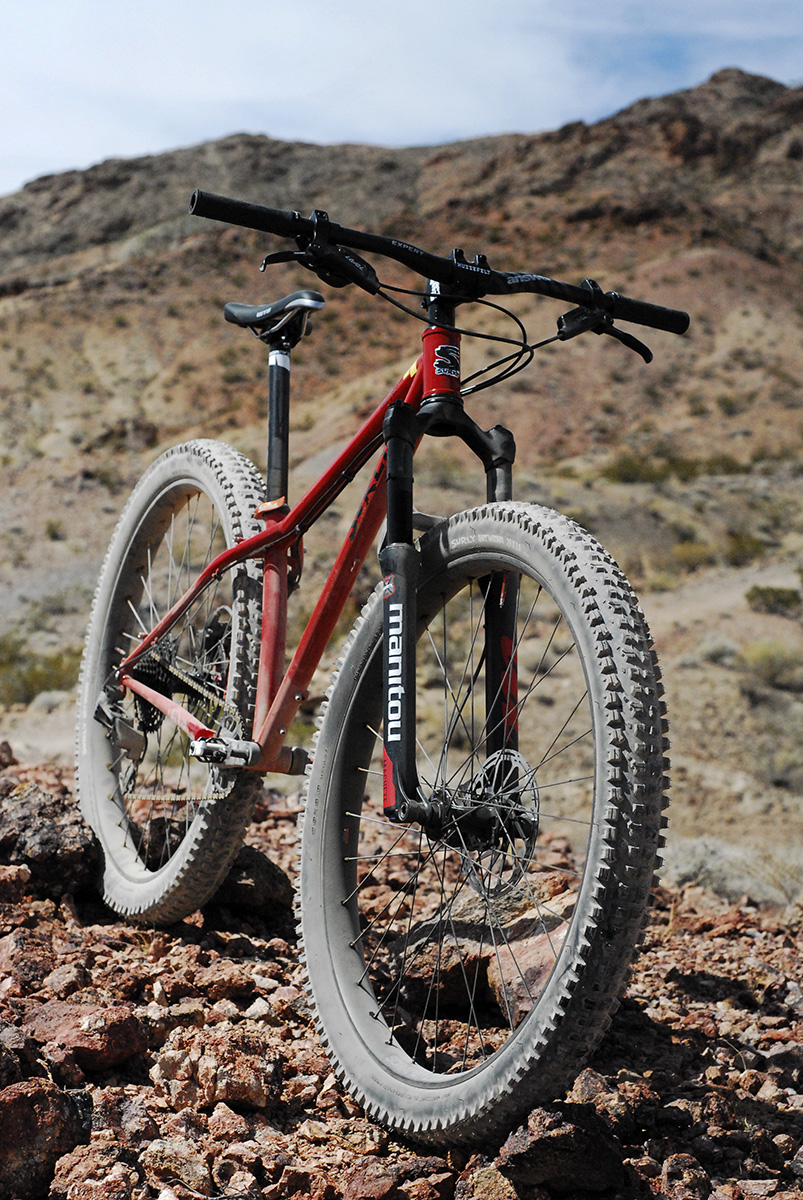 I’m not a numbers geek, and you could tell me the angles and lengths of various pieces of a frame a hundred times and I still probably would have to refer back to the geometry chart to remember. My mind just doesn’t work like that. But what I do notice and can appreciate are differences in experience, and I definitely noticed a contrast in the handling of this bike and the old Krampus. The 29+ tires still keep things rolling fast and easily navigate whatever sand, roots, rocks, and dirt you decide to point your tires toward, while being a little more maneuverable and less cumbersome than the previous model, especially for a small rider. I talked to a couple other vertically-challenged humans at the demo who had tried out the Krampus as well, and they all seemed to echo my thoughts on that matter.

The complete bike comes spec’d with a rigid fork, but, as one of the guys explained to me as he got me set up for my test ride, they wanted people to have fun riding the bikes in Bootleg Canyon, so Surly set them up with Manitou suspension forks. While there were certainly some chunky sections on the particular trails I chose to ride, there was also lots of flowy singletrack, so rigid wouldn’t have been all that bad. But the front suspension fork was much appreciated regardless, and it was a good demonstration of how the bike performed with the squish. 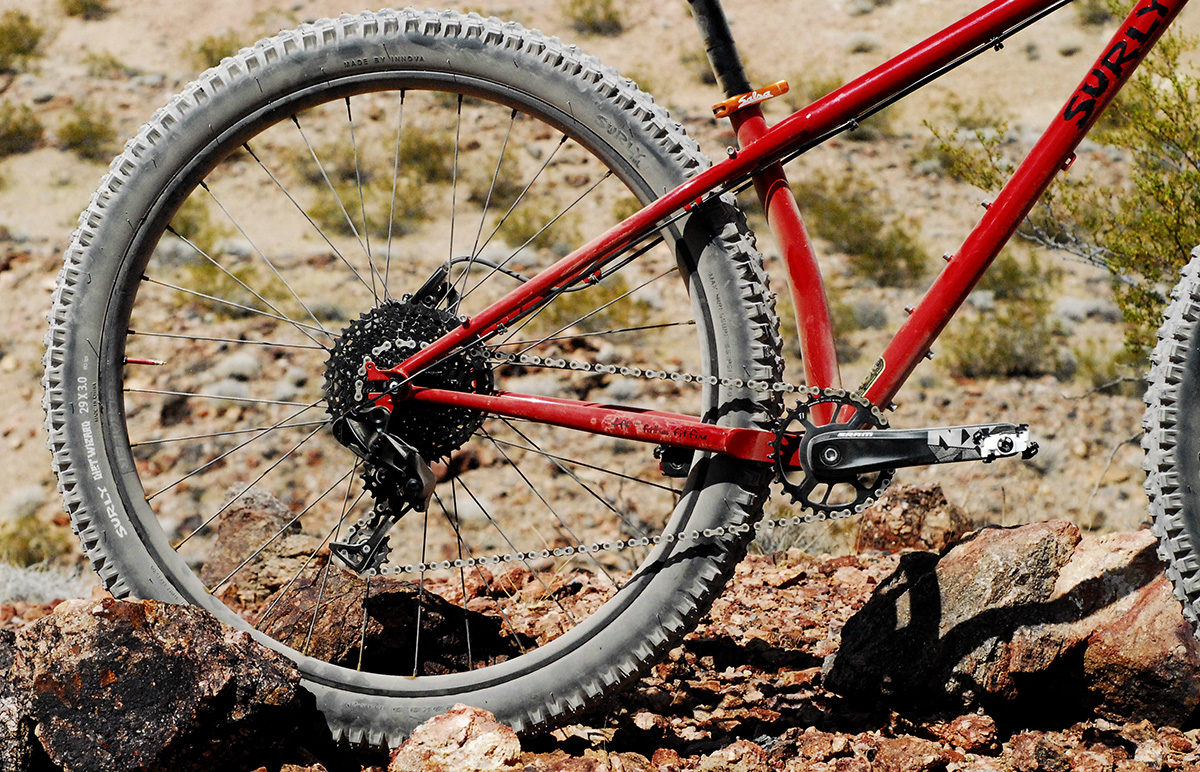 The stock build also includes a SRAM NX 30t chainring and rear derailleur, Sunrace 11-42t cassette, SRAM Level brakes, Salsa thru-axle hubs, and Surly Dirt Wizard 29×3″ tires mounted on 40mm Alex rims. I like the Dirt Wizards better than the previously-spec’d Knards as well, for their bigger knobs, but if you’re looking for lower rolling resistance, you might want to consider swapping out treads. The Wizards have a lot of meat and will hang on to the trail, but they aren’t the fastest-rolling tires out there.

The Krampus still retains the durable, steel, 29+ platform that is loved by many, while perhaps gaining accessibility for a wider market with a couple small tweaks and modernization as standards have evolved. The original plus bike is still out there and going strong.

The new Krampus will retail for $1500 and will be available this coming winter.

The Krampus looks rad with a suspension fork! Surprised they don’t offer this as a stock build.