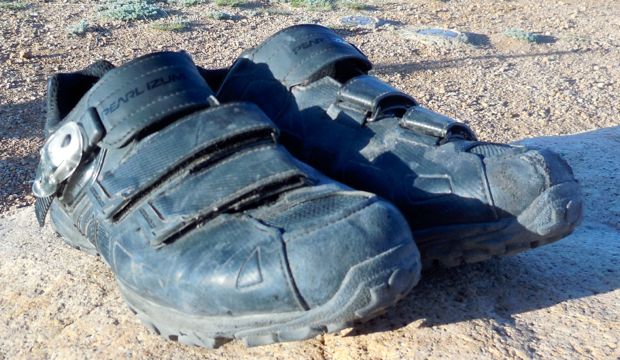 Well, the folks at Pearl were nice enough to assist me with that search, supposing that if one likes the III, they’ll like the IV just as well. They put their shoe where their mouth is and shipped me a pair, which I’ve been thrashing daily since I received them, including nine straight days of technical riding during the Second Annual Spring Break Singletrack Trek and the 30 Days of Biking challenge, in which I rode every day during the month of April ranging from a daily commute to work to the full-on gnar of Palmer Park.

So, how does the X-Alp Enduro IV compare to the III? In short, it is very similar. This review of the IV could almost be a cut-and-paste from the previous one of the III. However, here were a few key differences worth mentioning. Before going into the differences, here’s a quick review of the characteristics I noted from the three which the four has in common:

Now, here’re the differences. For me, they are a mixed bag–for others they will range from mixed bag to all good.

After all is said and done, my personal preference still leans just a smidge towards the III, but the IV is still so good, I have no need to look for another shoe to replace my IIIs when they wear out. I’ll go straight to the IVs without a care. If you’re looking for a long-lasting, comfortable, high-performance trail/all mountain shoe, I recommend giving the Pearl Izumi X-Alp Enduro IV a try–it’s perfect for the way 90% of us ride.

Thanks to Pearl Izumi for providing the X-Alp Enduro IV shoes for review! If you don’t like the basic black, Pearl also makes this shoe in a more vibrant blue/orange combination.

Great review! I’m in the market for a new pair of shoes and will need to check these out. One of my biggest complaints with my current shoes is that it stinks during hike-a-bike sections. These look like they might fit my needs better, pending they have a woman’s option 🙂

The women’s option does indeed exist for these shoes.

This may be too late to ask, do you know how the X-alp Enduro iv compairs to the X-alp Launch? I’m considering the two but can’t really tell much of the difference besides price and one had input from Brian Lopes. Thanks!

I haven’t tried the Launch. For the extra $65, it looks like you get a couple extra features like the “nergy Cell technology in heel crash pad for ultimate cushioning when off the bike.” It also looks like it has a little more mesh and a little less synthetic material in the upper, which would be a nice feature from my point of view.

Thanks John! Awesome Review by the way! You always do an awesome job!