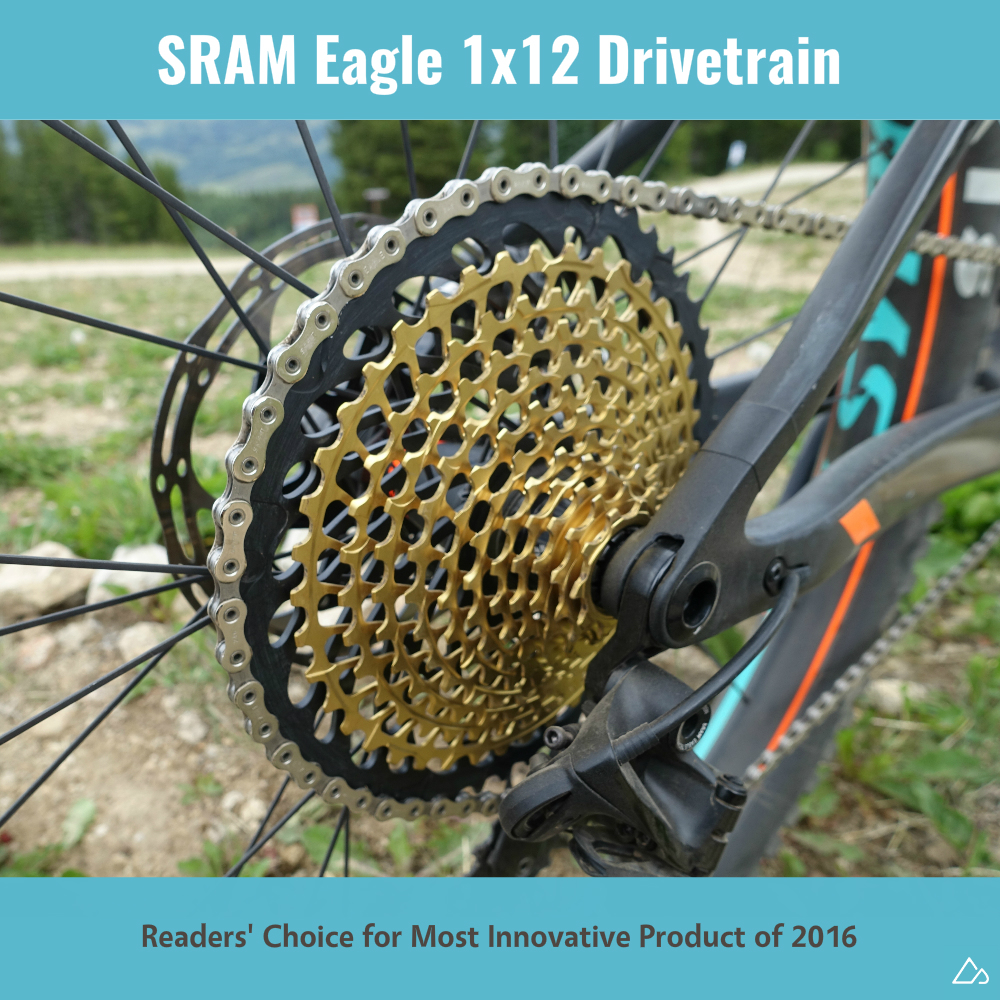 Just when you thought 11 speeds were enough, along comes SRAM with their new 12 speed Eagle drivetrains. The biggest news (pun intended) apart from the addition of one more cog, is the fact that it is a monstrous 50-tooth! Previously, the largest cog that SRAM offered was a 42.

The debut of Eagle had some riders asking why a 50T was even necessary. “I can climb just fine with my 42T cog,” was a common refrain. That misses the entire point of this group, though. Now, you can opt to run a larger chainring–think 34T or even 36T–but you still have a bailout gear for the steepest of climbs. No longer will riders have to choose between a small chainring that will have you spinning out on descents or a large one that kills your knees on the ascents. It is all about gearing range, and with the Eagle 10-50T cassette, you get 500%.

SRAM launched the Eagle group on their two highest group levels–no surprise there. The tippy-top XX1 group gets a sweet Smokey and the Bandit gold and black colorway, and rings in at $1,417. A grey and black version is also offered. Below that is the X01 Eagle group, which brings the price down a couple hundred bucks to $1,193. Weights for the complete groups are 1,456g for the XX1 and 1,502g for the X01.

Those prices mean you probably will not spot many Eagle drivetrains in the wild, at least for now. No doubt, SRAM will trickle down their 12-speed tech to lower prices just as they did with X1 and GX for their 11-speed groups.

For more information on Eagle, be sure to check out Greg’s Test Ride Review, here.

The 1×12 looks like a really great development. For someone like me, who is not a powerful rider but who rides in big country on big slopes, the 1×11 seemed a bit limited. But the 1×12 with a bigger ring up front seems like the best of both worlds — extra speed on descents and a little extra help getting up the big stuff. BUT for now, as much as I would like to, there’s no way I’ll move into a 1×12 at $1,200 or more. I can wait …

Truth mongwolf; I’ve been looking at new bikes and was going for a top shelf model (why wait until I’m 70). I see the Fuel EX 9.9 comes with that cassette. I’d hate to spring for $1200 each time I need a new one.

Ouch. So true HP. I didn’t even think of having to replace the cassette and drive train because they are wearable parts. Ouch. Ouch. Ouch. On the positive side, I assume that it is the entire drive train that is $1200, not just the cassette. But still, how much does that cassette cost? I must admit though, that gold cassette sure would look nice on my gold splashed Mojo HD. LOL.

Meanwhile, I’m still trying to work out the pun in the second sentence…

I fitted Eagle to a new sworks epic, wow its awesome , expensive but worth it