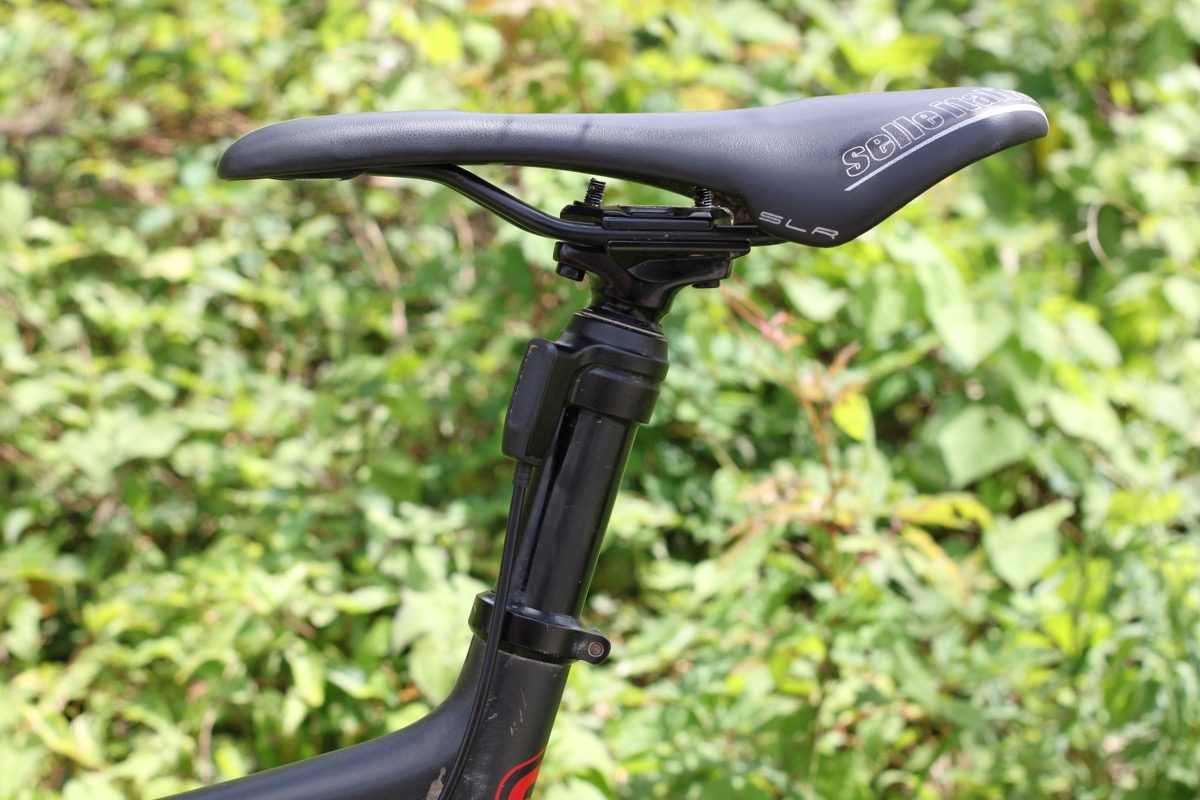 Last year we discovered that 58% of our readers aren’t running a dropper post on their mountain bike. Like everything else, dropper posts have their pros and cons. Among the “cons,” dropper posts can be expensive, and difficult to use and install. Fortunately for those who are still operating a fixed seatpost due to the reasons mentioned above, PNW Components has a solution: the Cascade dropper post. I’ve been testing the PNW Cascade for several weeks and here’s what I’ve found.

For mountain bikers who have never purchased a dropper post, the options can seem overwhelming at first. Beyond the seatpost diameter itself, dropper posts are typically offered with varying amounts of travel and length, plus internal or external routing choices. PNW keeps the options to a minimum on the Cascade: it’s an externally-routed, cable-actuated, 125mm-travel dropper post with an overall length of 406mm. The only choice the consumer needs to make is the diameter — 30.9mm or 31.6mm — and hopefully everyone knows or can figure out their bike’s seat tube diameter.

Because the Cascade is externally routed, it can be used on any bike with the appropriate seat tube diameter and depth. The 406mm length is a little longish for a 125mm travel dropper post, so if you’re a shorter rider with a smaller bike, make sure you have enough length for insertion. 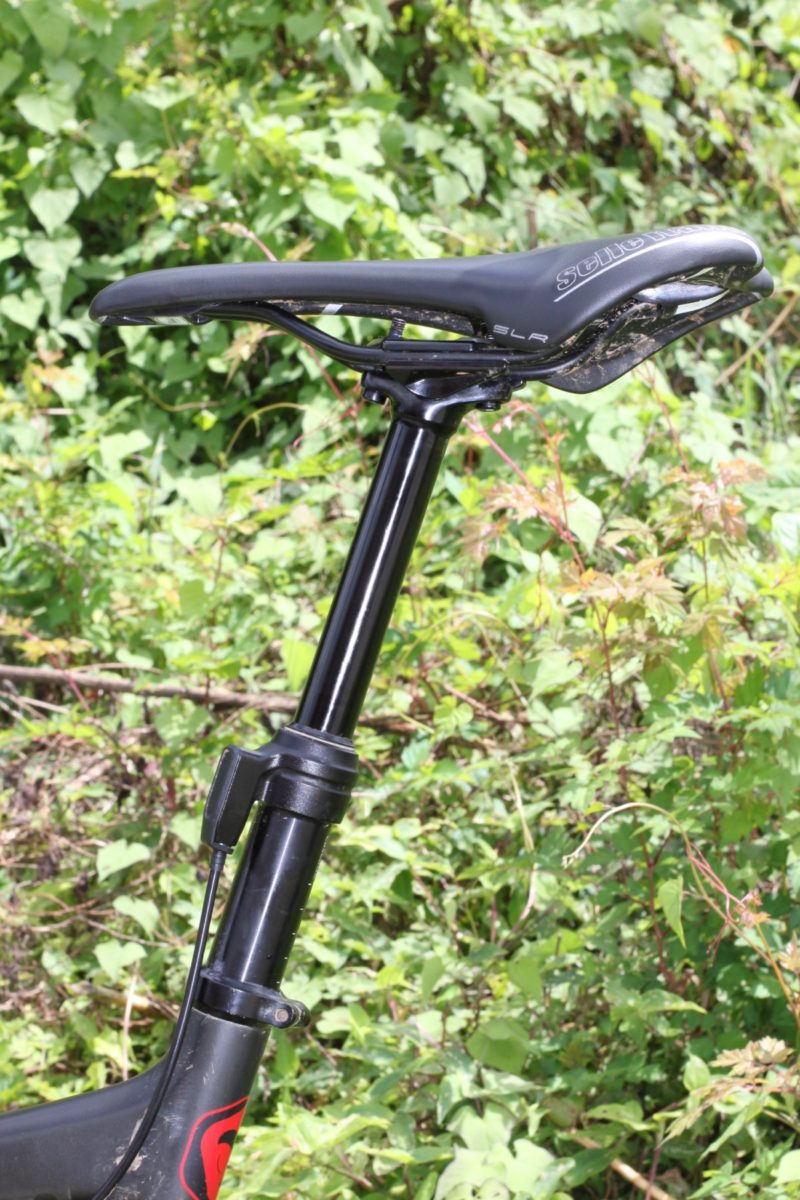 Speaking of travel, 125mm is a decent amount for a dropper post, though over time some riders may seek posts with longer and longer travel.  Dropper posts for road and cross bikes generally offer as little as 65mm of travel, while more aggressive mountain bikes might see 150-200mm travel posts. With those limits in mind, think of a 125mm travel dropper post as a happy medium, making it an excellent choice for Trail riders.

One of the dropper post “cons” the PNW Cascade does not address is weight. At nearly 600g (not including the remote and cable), the post is at least 100g heavier than dropper posts of comparable size. But the good news is the PNW Cascade only costs about half as much as those posts: $229.99 USD.

Many older bike frames cannot accommodate an internally-routed dropper post, which makes the externally-routed Cascade a good choice. But what makes it an even better choice is that the remote cable attaches to the post in a fixed position. Some externally routed dropper posts see the cable attached at the top of the post, which means the cable is moving up and down as the seat is raised and lowered. I’ve personally run into problems with cables getting snagged or simply refusing to work on other dropper posts for this very reason. The upshot is clean cable routing and reliable operation with the PNW Cascade.

I installed the PNW Cascade on my Santa Cruz Tallboy. My bike is an older model, so it doesn’t feature ports for an internally-routed dropper post. However, because I’m not running a front derailleur, I actually found a couple good lines with cable stops already on the frame.

The PNW Cascade ships with a length of housing and a derailleur-style cable. Mounting the actual post to the bike is simple, as is attaching the remote to the bars. I did find routing the cable through the tiny barrel nut on the remote to be a little tricky, but after doing it the first time, it wasn’t so bad the next time. After using the dropper post on a couple rides, I needed to tighten the cable, probably due to cable stretch. 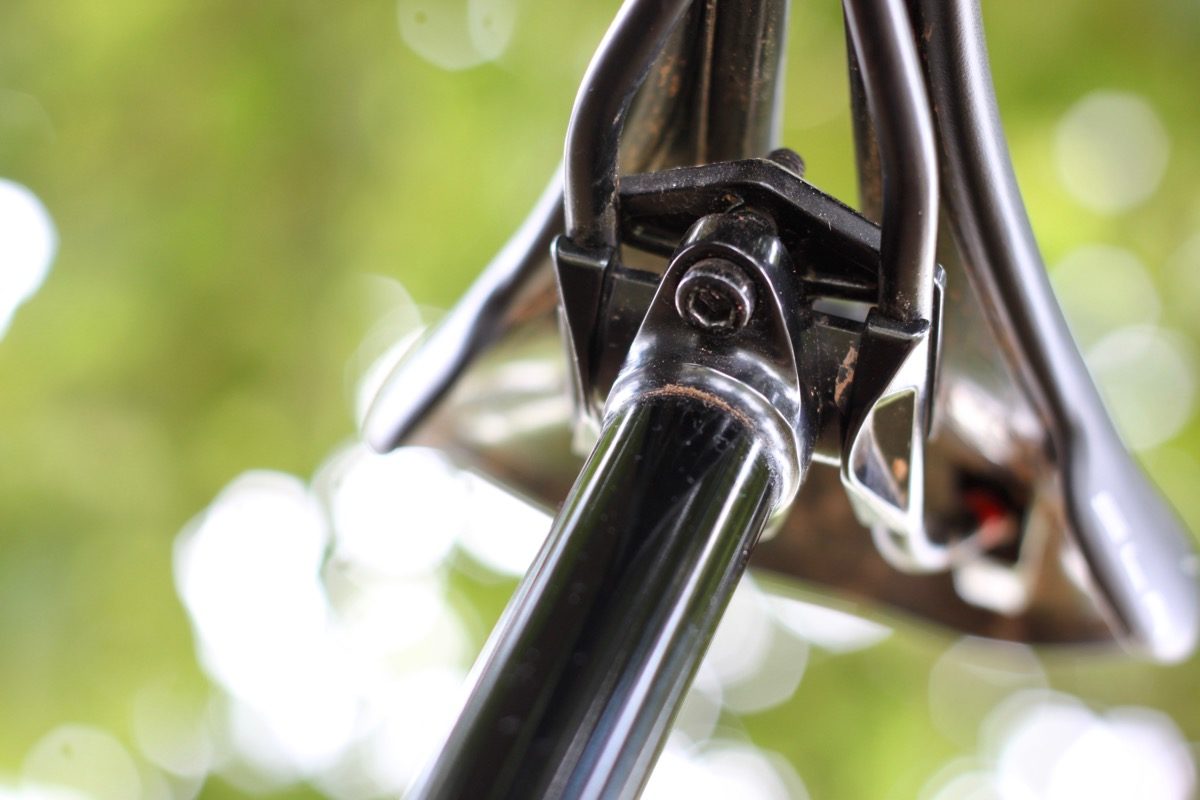 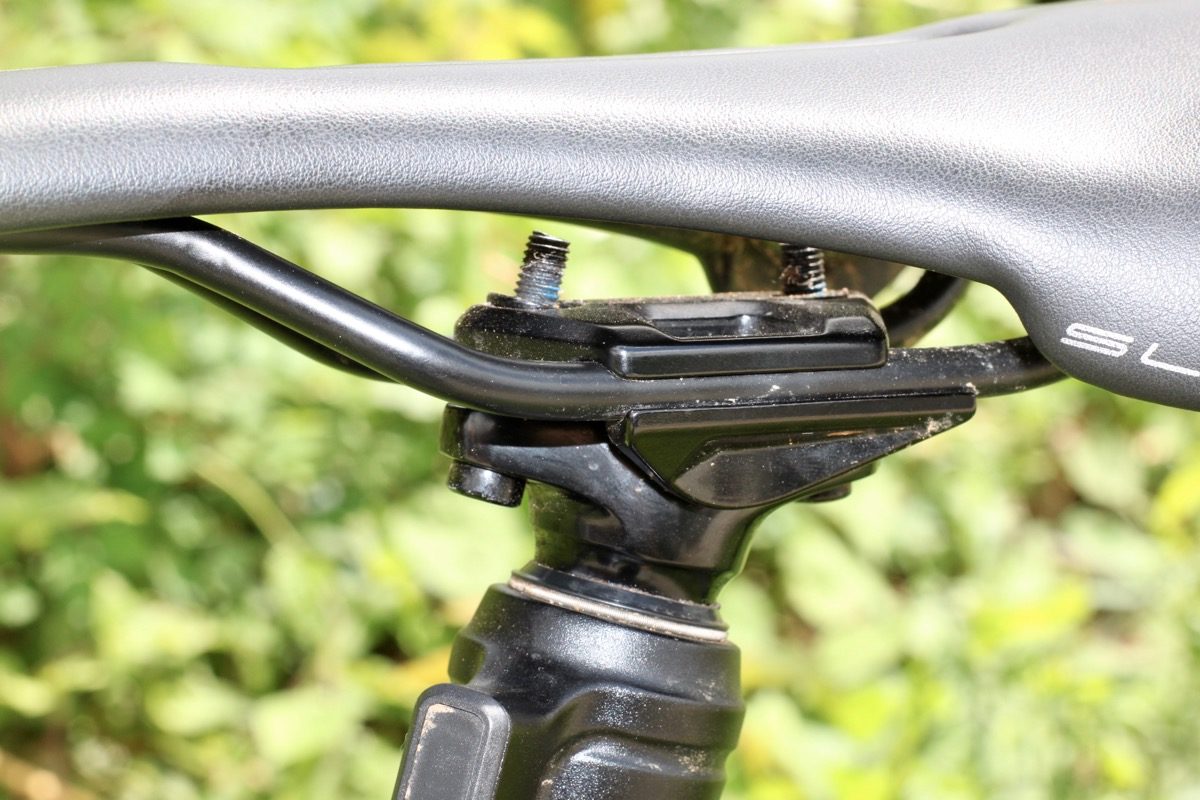 At the top of the post, PNW utilizes a two-bolt head that works well for dialing in just the right saddle angle and position. The head appears to be fully machined rather than simply fused onto the post, which should help maximize strength and minimize side-to-side play.

By now, most mountain bikers know what to expect from a dropper post. We expect the post to drop and raise when we tell it to, without hesitation, and without fail. By that measure, the PNW Cascade has been a success during my tests. I’ve had problems with externally routed posts malfunctioning in the field, and it’s generally due to the cable getting snagged. With the fixed cable position on the PNW Cascade, I’ve encountered zero issues with the remote. 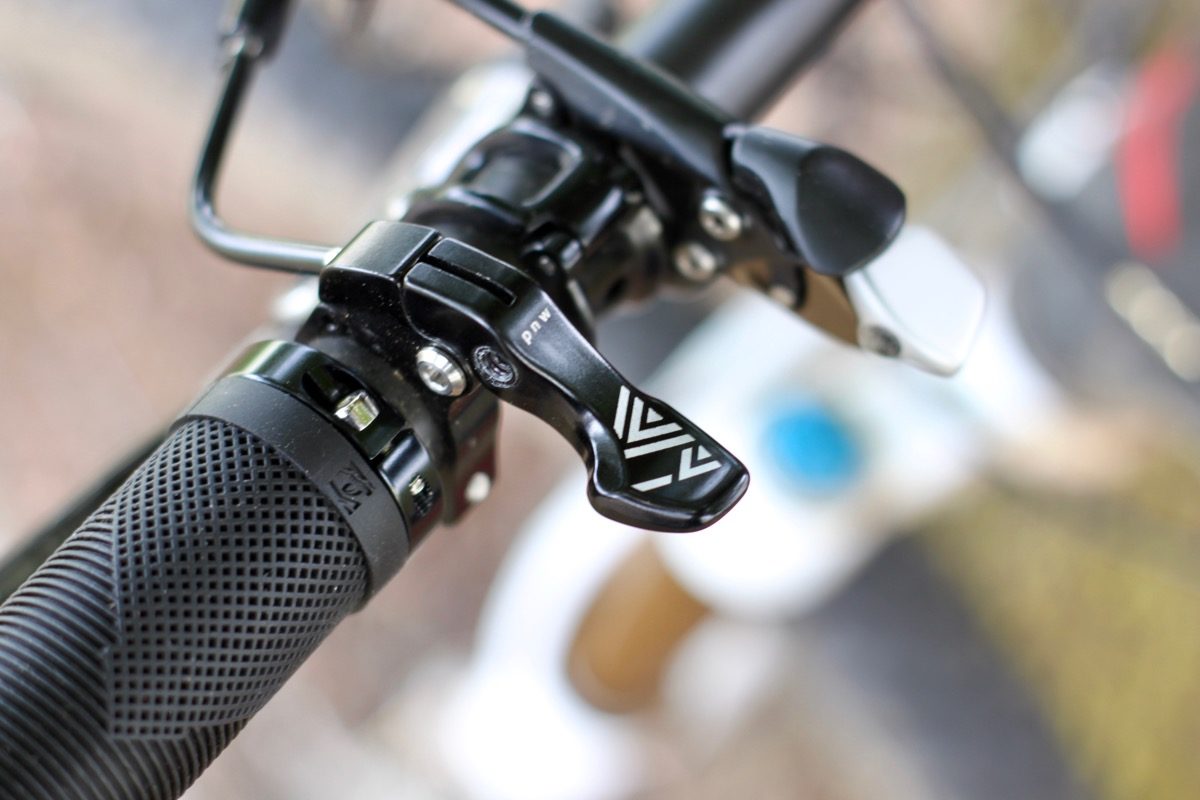 The included remote, while perfectly functional, isn’t quite as easy to use as a trigger-style remote. Of course not everyone is running just a single shifter, which makes the included remote a safe choice. I was able to mount the remote in a convenient spot and fortunately I have big hands, so it’s NBD. But some may choose to upgrade the remote by either converting an old shifter or purchasing something like Wolftooth’s ReMote. 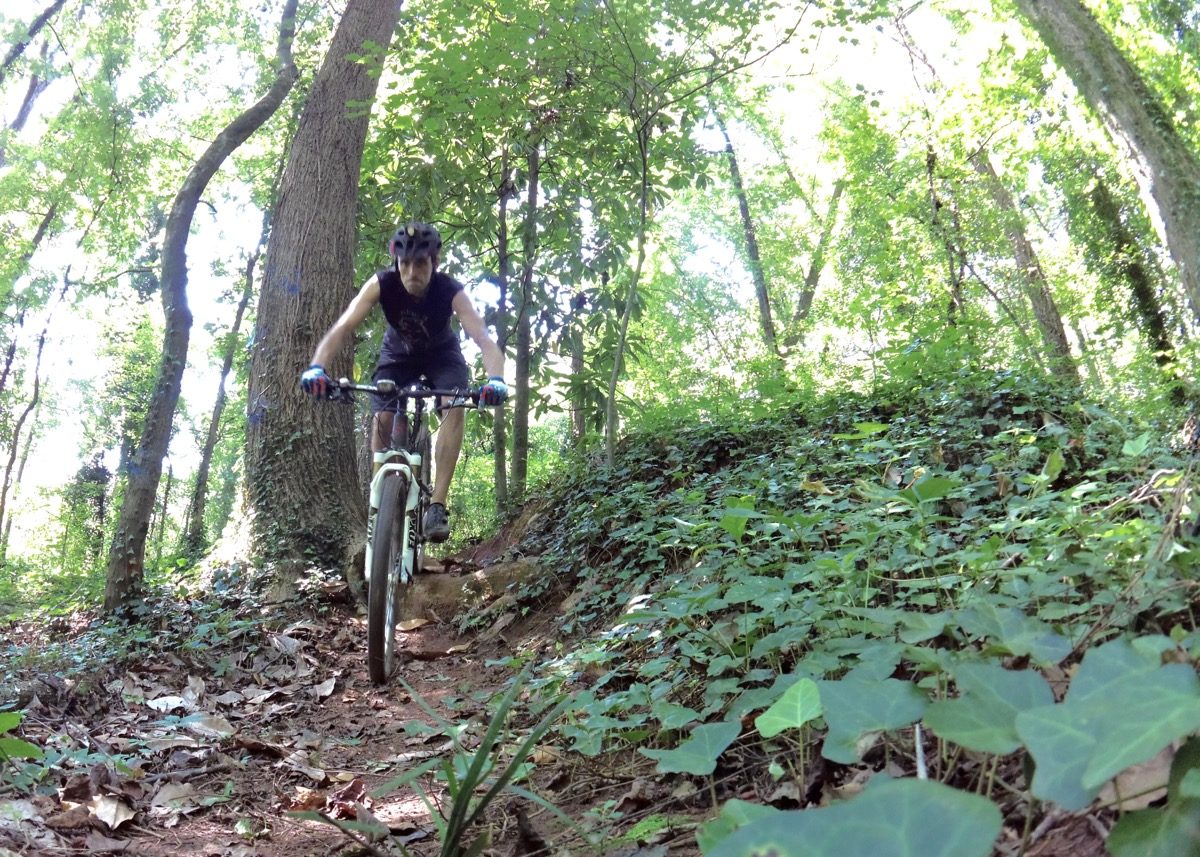 The return rate on the PNW Cascade dropper post isn’t the fastest I’ve tested. Some dropper posts return quickly and with an emphatic thunk; the Cascade put out a more relaxed, Pacific Northwest vibe as it makes its way back up to full extension. Pro racers might find the slower return to be a minor issue, but the vast majority of riders won’t notice. If anything, this moderated return rate gives riders time to get sensitive areas out of the way of the returning seat post. 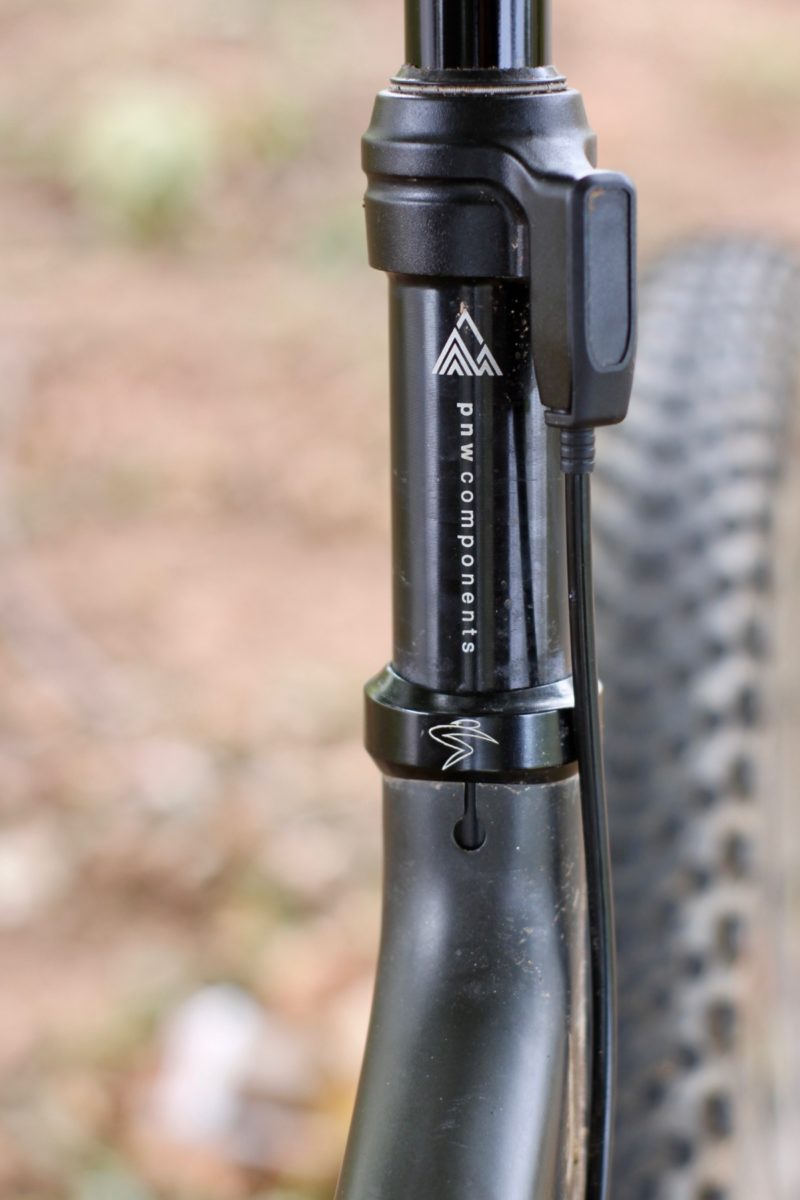 Like most dropper posts, the PNW Cascade can be set at maximum and minimum extension, or anywhere in between. On the trail, I found 125mm of travel to be adequate in 95% of the situations I encountered. Sure, there are times when I could’ve used even more drop, but that’s sorta like the constant need for one more gear. No matter what you have, you’ll always want a little bit more for special situations. 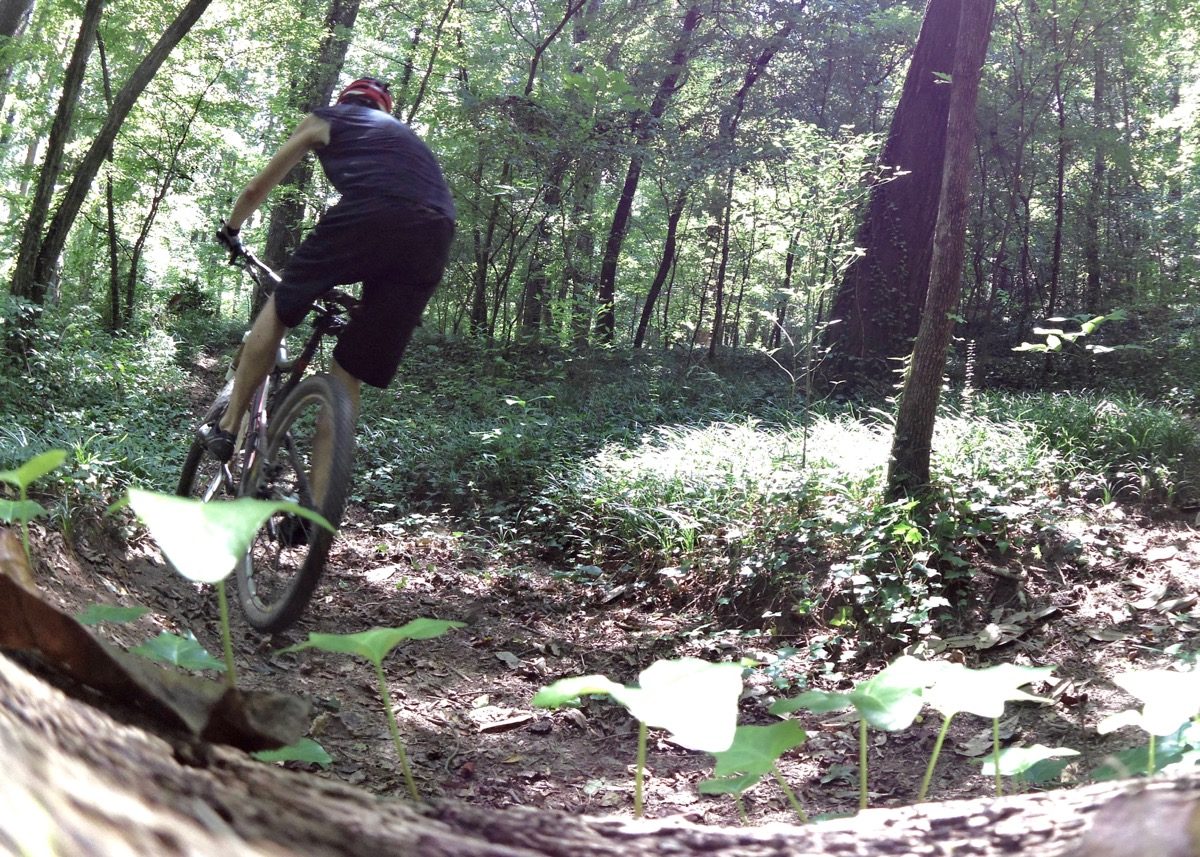 About 1-degree of side-to-side play has developed (or perhaps existed from the beginning?) but it’s not noticeable while riding. Admittedly, I often forget and lift my bike by the saddle during transport or hike-a-bike sections. Other dropper posts I’ve tested tend to complain about such abuse more loudly, offering up sickening clunks and clicks. The PNW Cascade, by contrast, takes the abuse in stride, and feels almost as solid as a traditional seat post when lifting the bike by the seat. In fact, PNW says it’s NBD to pick up the bike by the seatpost:

If the seat post is lifted while in the lowered position, the post stanchion (inner tube) will extend from the outer post tube. This is normal and it will return to the proper position once weight is applied to the saddle. Picking up the bike by the saddle can also cause a temporary “spongy” feel.

Despite my minor gripes about the PNW Cascade, I have to say I really love this seatpost and I plan to continue running it for a long time. With a simple and reliable design and solid performance, there isn’t much more I can ask for from a dropper post.

Thanks to PNW Components for providing the Cascade dropper for review.

Jeff – Thanks for this review. I have been looking at their products lately and might just pull the trigger.

One important note – if you use discount code “PNW20” you can get 20% off any of PNW Components products including the Cascade. At $185 I am finding it very difficult to resist the urge to buy one.

I think you mean ‘despite the hype, only 42% of riders use these devices, which allow a rider to avoid the famous compromise of ‘cheap, light, strong – pick two’ by now having a product where a rider can feasibly pick none’.

I most concur with so many, I love my dropper post. Due to my travels, I borrowed a bike the first half of this summer, and it did not have a dropper. Wow, what a great reminder it was of the pleasures of a dropper. I have a cable actuated dropper that’s five years old now. The only problem I have ever had with it is that it will stick after not being used for a few months due to my travels. But a good pounce or two with the bum does the trick every time. It has been a reliable old friend indeed.

My two cents is buy a dropper if you don’t have one already. You won’t regret it. And with the price that Rowdy_Burns is suggesting it won’t set you back too bad.

I got a DNM dropper. Its great and it’s only $139. 330mm length with 100mm travel. The set screw design is my only complaint. It’s worth checking out. Google KeyWords DNM 330 Dropper. Or check these links.