After taking a few years off from regular racing, I decided to get back on course in 2016. I made a schedule, got a coach, and started training. Now, I just needed a bike.

For a dedicated race bike, my first thought was to go with a 29er. I reached out to Norco about sending their Revolver 9 FS, a full-squish 29er XC bike. They were out of stock on the 29ers, but said they had the 27.5 version of the same bike available. Hmm… A 27.5 race bike? That could be interesting.

Norco calls their line of XC race bikes “Revolver.” Within the line, you have numerous choices: hardtail (HT) or full suspension (FS), 27.5″ or 29″ wheels. and then spec level or frame-only. The FS frames are offered in four different build kits starting at $3,050 and topping out at $7,415. Prices for either wheel size are the same. The Revolver 7.1 tested here is their second-highest offering, and retails for $4,645.

This bike is a stunner with smooth lines, internal cable routing, and a matte orange and black finish. The entire frame is carbon, including the linkage, which is also painted to match. The pivots use oversized hardware anodized in silver for a bit of contrast. Norco etched the torque specs for the pivots directly onto the hardware itself, which is super handy when it comes to maintenance.

Poring over the geometry chart reveals an interesting mix of old- and new-school philosophies.

Well, take the steep 70.75-degree head tube and 74.25-degree seat tube angles. Most people would consider that classic XC race geometry. But then you look at the stubby chainstays (431mm), long reach (452mm), and low standover height (739mm), and you can see the influence of modern trail bikes on the Revolver’s design.

All of the measurements above are for the large-sized Revolver. It should be noted that those numbers change depending on which frame you order. As the frame size grows, the angles change, and both front and rear centers lengthen. The idea behind this is to keep the rider’s weight evenly distributed, regardless of frame size. Norco calls this concept “Gravity Tune,” and features it across their mountain lineup.

Personally, at 6-feet tall with long arms, I found the Revolver to fit me quite well initially. All I had to do was dial in my saddle height, bar position, and controls to get comfortable. After noticing some discomfort in my lower back on rides longer than three hours, I swapped out the stock 80mm stem for a 70mm. That subtle change made a huge difference, and I didn’t experience any more back pain afterwards.

The matte orange and black Norco may be a full-blown race bike, but the frame and spec are full of nice touches that make the Revolver a well-balanced mountain bike. For instance, the size large I received came with a 180mm rotor on the front–a welcome surprise. Going with a 160mm front rotor would have cut some weight–and likely a small amount of cost too–but Norco went with function first. While the bike isn’t spec’d with a dropper post, the frame accepts stealth routing should you want to add one down the road. Other small things–like including tubeless valve stems, protective crank boots, and even a bell in the box–make it clear that a lot of thought goes into Norco’s bikes.

Norco went heavy with SRAM spec on this bike. The drivetrain uses a smart mix of SRAM’s 1x groups with an X01 crankset, X1 shifter and rear derailleur, and a GX-level cassette. Again, the choices were made to squeeze out the best performance-to-dollar ratio possible.

The brakes are SRAM’s 4-piston Guide RS, which have plenty of power paired with excellent modulation. 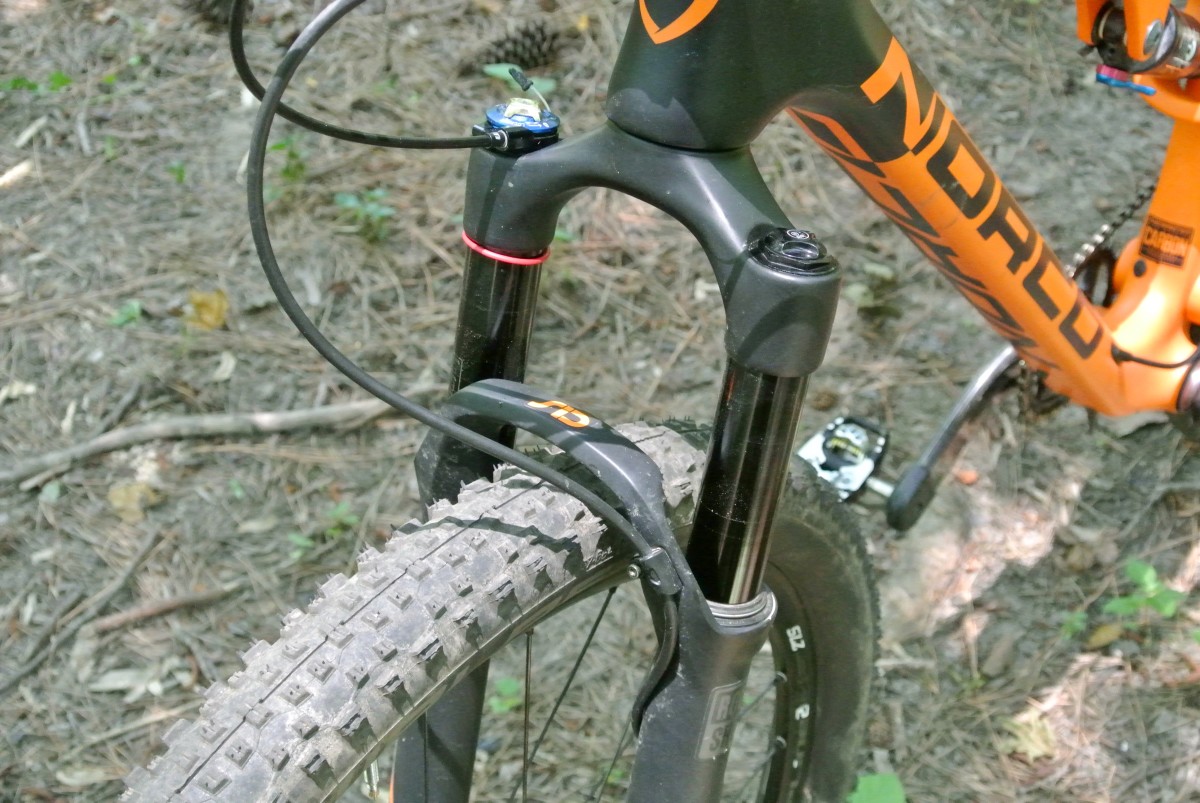 Suspension duties are split between a RockShox SiD RLT fork and a Fox Float CTD shock. Both are fairly basic offerings with limited tuning options, but a bar-mounted remote lockout is included for the SiD. I thought about removing the remote to cut down on clutter, but I’m glad I didn’t. I ended up using the lockout dozens of times each ride.

Norco chose DT Swiss’s X1700 Spline Two wheelset for the Revolver. At only 20mm wide internally, they are firmly in XC race territory, and arguably a bit behind the times. When I was charging through chunky sections, I could feel the rims flexing. On the plus side, the wheels come pre-taped for tubeless use, so converting is as simple as throwing in the included valves and adding some sealant. And, as expected, DT’s hubs were reliable and quiet with quick engagement.

Schwalbe’s featherweight Racing Ralph LiteSkin tires completed the wheel package. However, unless you’re an equally featherweight rider, I wouldn’t recommend running the stock tires tubeless. The sidewalls are paper-thin and have noticeable flex, even with tubes installed. Schwalbe claims these tires weigh just 530g a piece, and I’m inclined to believe that. I resisted swapping out the tires immediately and was impressed with how fast they rolled. They got me through my first race or two, but after flatting twice on some tame terrain, the Schwalbes had to go.

For the majority of the cockpit and contact points, Norco called its own number, with the exception being the color-matched SDG Circuit saddle. I was elated to see a decently-wide bar (740mm) and short stem (80mm) stock. More high-fives to Norco’s product manager.

There was one spec choice–albeit small–that didn’t stoke my spokes. Norco went with their own brand of silicone grips. Racers know that using silicone grips is an easy, and relatively cheap, way to cut some weight, but these Norco grips are some of the firmest grips I’ve ever used, silicone or otherwise. Luckily, grips are an easy thing to swap out.

The complete size-large bike–including remote, bell, and tubes in the tires–came in at just 23.4 lbs. (10.6kg)! That’s a damn light bike, especially considering the price tag.

Click here to read on page 2 about how the Revolver performed, out on the trail.

Progression
Sizing Up or Down Plus Handlebar Widths and Crankarm Lengths:...
Gear
You Have $5,000 to Spend on a Mountain Bike. Which...
Gear
Never Underestimate the Power of a Good Zip-tie
Gear
The Shimano GRX Drivetrain Brings Familiar Mountain Bike Tech to...
Subscribe
Login
Please login to comment
2 Comments
Most Voted
Newest Oldest
Inline Feedbacks
View all comments

I’m honestly quite impressed with the pricepoint–full carbon frame, great parts, solid performance, and really low weight at less than $5k. Recently I’ve been saying that if I was paying my own cash for a bike, that I wouldn’t spend much over $4,000 right now, and this bike reinforces that belief. Obviously $4k isn’t cheap, but it’s nice to see that you can get a truly excellent mountain bike for a third of what the top-tier bikes cost.

True dat! And the jump up to the tippy-top-level Revolver 7XX is substantial at $2,800. I bet it shaves a pound or two, but you could take that $$$ and buy an entire bike, like an alloy Sight or Optic from Norco. Or cover your race entry fees for a few seasons.