After spending a couple of months with the Pivot Firebird, it’s time to part ways with this interesting bike. 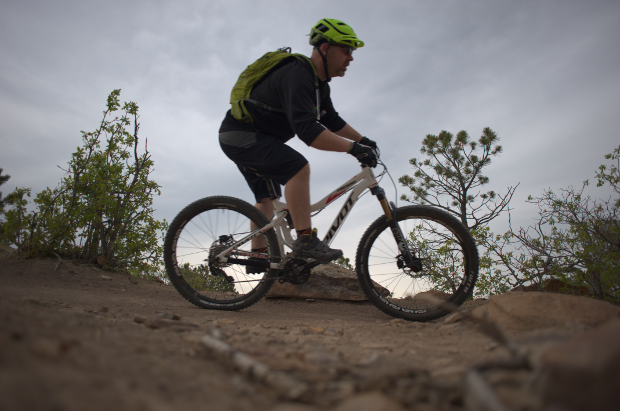 For build specs and other details, check out the On Review article.

Living in the Denver area, I have access to a variety of trails that include steep climbs, rocky technical descents, flowy singletrack, as well as wide open, high plains cruising. Some trails, such as South Shore Lake Pueblo, have all of these in one place, making a “do-it-all” bike a great way to fully enjoy the entire ride.

As I alluded to in the on test article, the Firebird began life as a 26er model and Pivot engineers retro-fitted it to be a 27.5/650b. I expect that this presented some interesting engineering challenges and, in my opinion, also fundamentally changed the personality and handling of the bike. Common to either wheel size, the group levels and component choices speak to a bike designed for uncompromisingly hard riding and ultimate dependability.

Specifically, Pivot starts with rugged Gravity cockpit components. Gravity are well-known in the freeride and downhill genres, and while not the lightest parts, they are definitely designed to take some abuse. Pivot also offers some of their own branded components, such as the excellent carbon bars that came on my test rig. 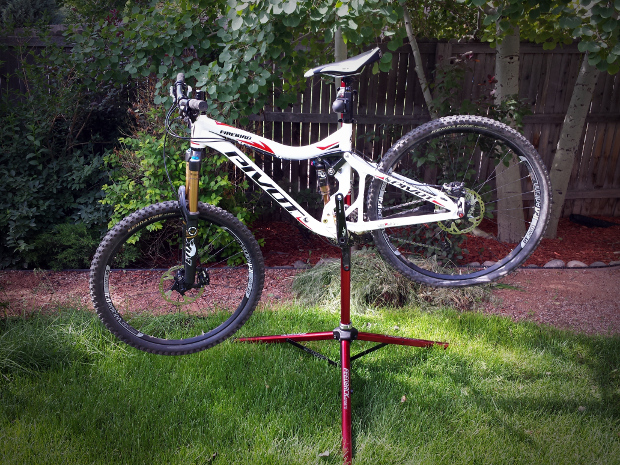 The XT drivetrain and brakes performed every bit as well as expected; however Pivot also offers the Firebird with Sram X01, if that’s your thing. In either case, between the clutch rear derailleur and MRP chain guide, the chain is not coming off. No matter how hard you try.

The DT Swiss wheels were up to the task and are none the worse for wear. The 2.2″ Kenda Honey Badger tires, however, seemed like they were holding the bike back from its full potential. While I had the Firebird, I also received some test WTB Vigilante 2.3″ tires, which were a huge improvement. Watch for a full review on these later. It should be noted that tire clearance on the back is very tight. The 2.3’s just fit with about 1mm of clearance. There will not be a larger tire on the rear of this bike. Ever.

The Fox 34 fork and Float rear shock, both with Kashima and CTD adjust, worked as expected and held up well. 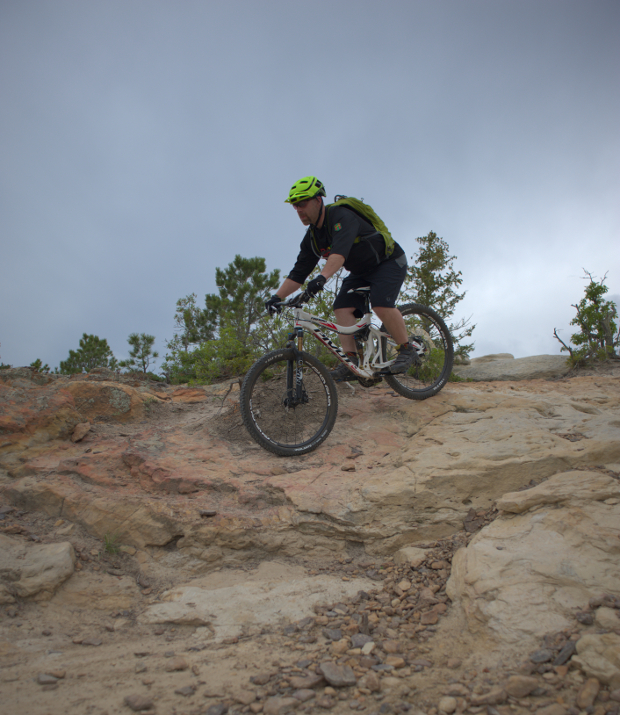 With the Firebird, Pivot has struck a compromise between weight and heavy duty trail durability. At 31 pounds, it’s not the lightest bike out there, and with a single crown fork, it’s no downhill sled, but it is a bike that can bomb the downhill runs, regardless of whether you pedal or ride the lift to the top of them.

Those of us who are bike nerds can talk about specs and engineering all day, but when the rubber hits the trail is where it really matters. I’ll get straight to the point: while the ‘Bird is overall a fun bike to mess around on, the 26er underpinnings do show through from time to time.

Despite its weight and over 6″ of travel, the Firebird climbs surprisingly well. Out of the saddle attacks on technical features and sustained seated efforts are both effective and comfortable and will reward the rider with uphill mobility. The Fox CTD suspension settings are useful, of course, but I rarely needed to adjust it beyond the “Trail” setting. Wheelies are a breeze on this bike, making it easy to loft the front over obstacles, but it also stays put when you don’t want it to come up. 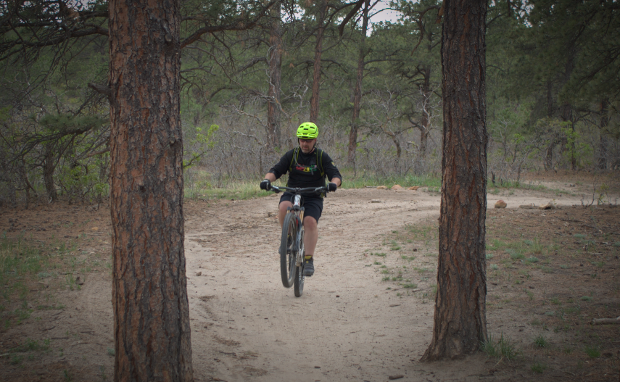 Given the long travel and slack angles, of course the Pivot really shines on technical downhills. Ledges, drops, rocks, roots–the Firebird eats them up and comes back for more. The only limit to what this bike would drop off of was me. As an added bonus, the 650b wheels offer a bit more roll-over-ability than 26″ wheels, but without the unwieldy effects that 29er wheels can produce. In my humble opinion, 27.5/650b is the perfect wheel size for this type of riding.

One area of handling that left me puzzled was fast, flowy singletrack. At speeds above 25 MPH or so the handling felt loose and unstable. At the same time, high speed cornering was a white knuckle experience, with significant understeer and a marked tendency for the front wheel to slide out.

I spent a lot of mental energy pondering this handling anomaly, and I came up with a theory about its cause, as well as some tips to help mitigate it.

When Pivot redesigned the Firebird into a 27.5 model, one of the engineering tricks employed was to install an angled headset in order to slacken the head angle. This of course also moved the front wheel forward, effectively keeping the same approximate wheelbase, despite the larger wheels. However… a side effect of this engineering trick is that the rider is now positioned farther back in relation to center of the wheelbase. My theory is that this unweights the front wheel slightly, reducing its traction, while also putting extra weight on the rear, as evidenced by needing to grab a massive fistful of XT rear brake in order to drift the rear end. Armed with my theory, I experimented with shifting my weight forward on faster sections and in corners–the idea being to restore some weight and balance to the front of the bike. Employing this technique, as well as installing the Vigilante tires, definitely helped the overall handling, and after some practice, I could see this actually being a bike fit for what Pivot advertises it for: enduro racing.

Other Observations, in No Particular Order

While my test rig came with a fixed alloy seat post, this bike screams for a dropper post. When the trail turns downward, the saddle is just in the way. While the QR seatpost clamp allows the saddle to be dropped for sustained downhills, trails that constantly change between climbs and descents will require more adjustment than is practical this way. The upper two model levels of the Firebird are spec’ed with a KindShock Lev dropper. If you get one of the lower builds, you’ll want to make a dropper post one of your first upgrades.

Despite the published geometry numbers, the effective toptube of the Firebird feels really short. I upsized from my normal small to a medium, and it still was pretty snug with the stock 50mm stem. A friend of mine who normally rides a medium gave it a try and immediately felt like he would opt for a large. Keep this in mind when shopping. 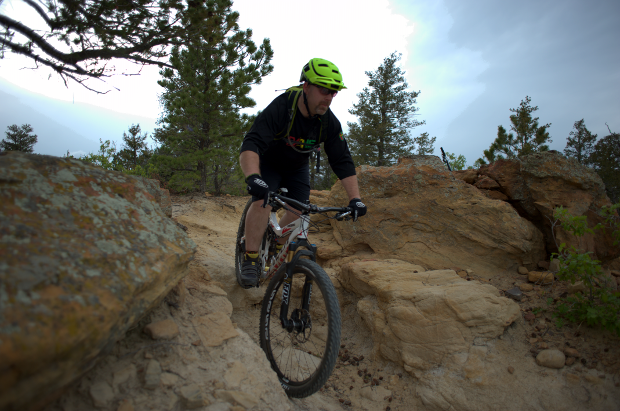 I have ridden 740mm bars on several different bikes, so I assumed the 760’s on the Pivot would be similar. On the contrary, they felt a little too wide for me, and didn’t seem to offer any advantage over the 740’s I’m used to. I also whacked them a couple of times on narrow trail features. Your mileage may vary, but I feel like 740’s would be the sweet spot on this rig. But of course you can always cut your bars down… you can’t make them grow longer!

Finally, Pivot’s suspension setup is hands-down the easiest I have ever dealt with! The rear shock has a nifty built-in sag indicator, and the included weight/pressure chart for the fork was spot-on. It took two rides to dial in the rebound, and since then I haven’t touched it.

With a price tag of $5,499 for the XT version, the Firebird is not a purchase to be made lightly, and in many cases it will be the rider’s only mountain bike. With this in mind, if you’re a lycra-clad XC rider or recreational rider who thrives on the blue runs, this bike is not for you. 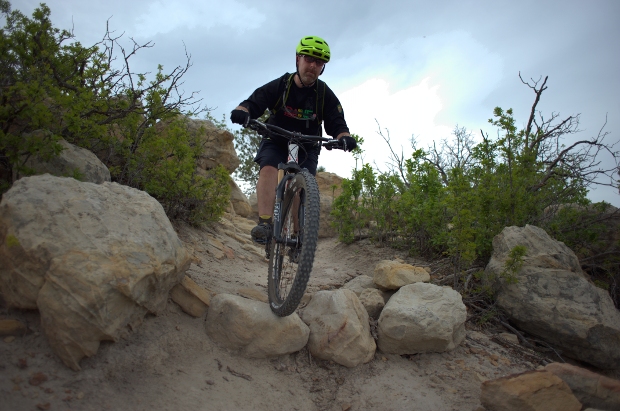 However, if you like to ride big trails and huck off of every obstacle you encounter, and you like to earn it by pedaling the climb, then this bike will be right up your alley. Pivot bills this model as an Enduro bike, and with some time invested to get used to the particular way that it handles I can definitely see that, but I would submit, alternatively, that this is more of a freeride bike. It can climb confidently, but it can also drop off pretty much anything that you have the guts to try. Also in the one-bike-for-all-gravity riding genre, given the burly build of the Firebird, it would even work well for that occasional trip to the lift-serviced bike park.

Thanks to the folks at Pivot for sending over the Firebird 27.5 for review!

Gear
The Shimano GRX Drivetrain Brings Familiar Mountain Bike Tech to...
Gear
You Have $5,000 to Spend on a Mountain Bike. Which...
Gear
Never Underestimate the Power of a Good Zip-tie
Progression
Sizing Up or Down Plus Handlebar Widths and Crankarm Lengths:...
Subscribe
Login
Please login to comment
3 Comments
Most Voted
Newest Oldest
Inline Feedbacks
View all comments

When I saw this bike in person, I was definitely surprised at how small the frame and cockpit were. However, if you’re a really short person–or even a younger teen–who’s looking for a lot of travel packed into a compact frame, this would be a fantastic choice!

I also thought the bike looked really small in your pics. Like two sizes too small.

In general, bikes in this category are on the small side, so that they can be thrown around a bit. For me, the medium was fine.