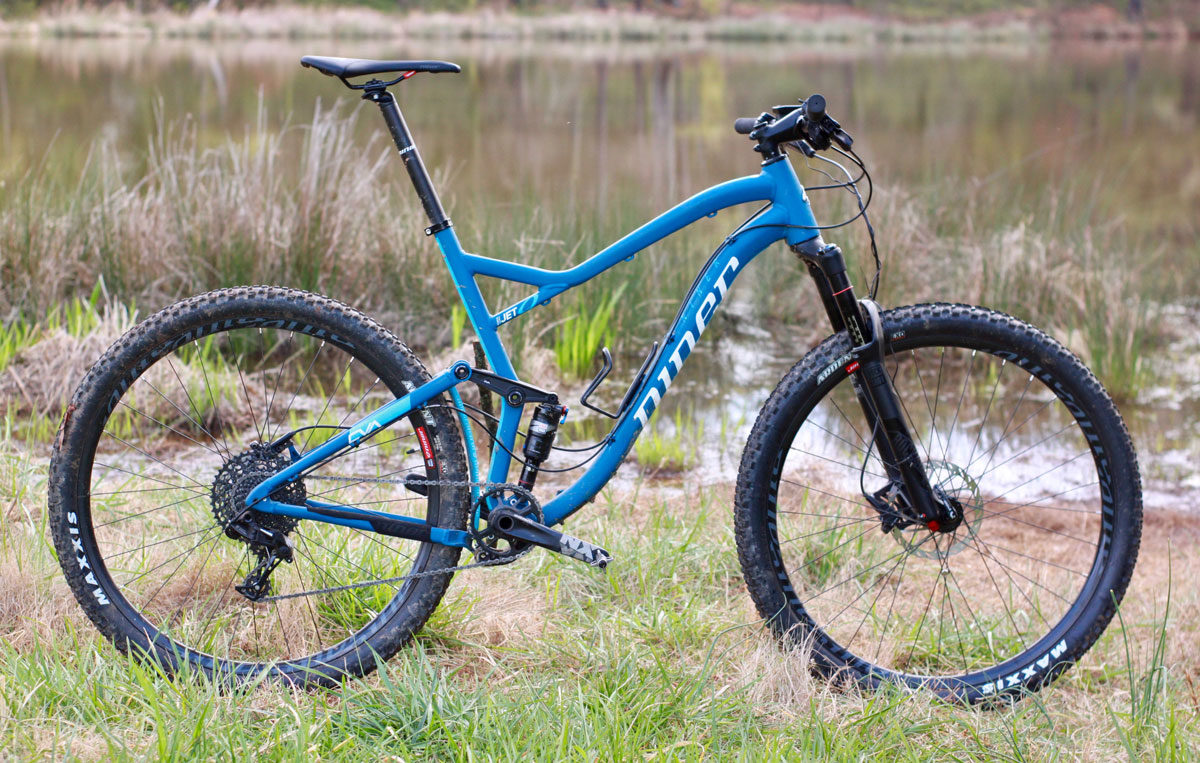 Niner has updated the JET 9 once again, going longer and slacker to make this trail bike even more capable. I’ve been testing the JET 9 Alloy, 1-star build, a relatively budget-friendly option for those looking to slay everything from the local XC trails to epic backcountry descents. Here’s what I learned.

Aaron reviewed the last two generations of the JET 9, and to recap, here’s what’s changed in less than two years. Just two years ago, the JET 9 was a 100mm front and rear travel bike and was billed as an XC/light Trail bike with a steep, 71° head tube angle. Aaron found the fork on the JET 9 to be a little outgunned for full-on trail rides, and apparently so did other Niner customers.

So, last year’s JET 9 came spec’d with a 120mm fork, but Niner stuck with the same frame design, resulting in a 70.5° head tube angle. Like the previous version of the JET 9, the new bike stayed at just 100mm of rear suspension travel. Then last year the alloy version of the JET 9 briefly disappeared, but fortunately it would be back quickly with updated geometry. 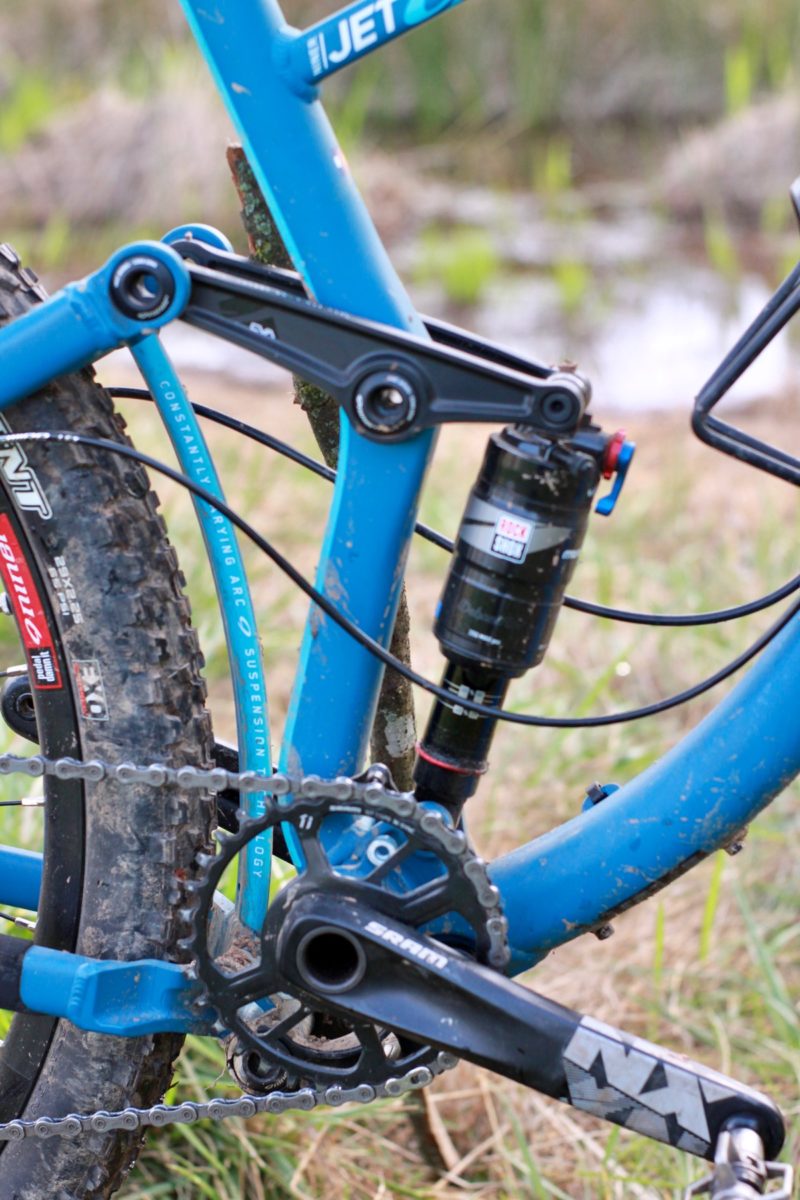 The new JET 9 alloy, which I’ve been testing for a couple months now, features 130mm of front travel and 120mm of rear travel plus new longer, slacker geometry. The geometry changes, like the suspension changes, are pretty significant this time around: the headtube angle relaxed from 70.5° to 67.5°; the chainstay length lost 19mm to 435mm; the wheelbase grew 28mm to 1179mm; while the reach stayed virtually the same at 445mm (these specs all refer to the size large frame.)

Put another way, the new JET 9 is designed to improve descending by slowing steering and improving stability while adding a bit more playfulness and improved acceleration. Oh, and the fit of the bike should be basically the same as the previous version since the reach only changed by 1mm. 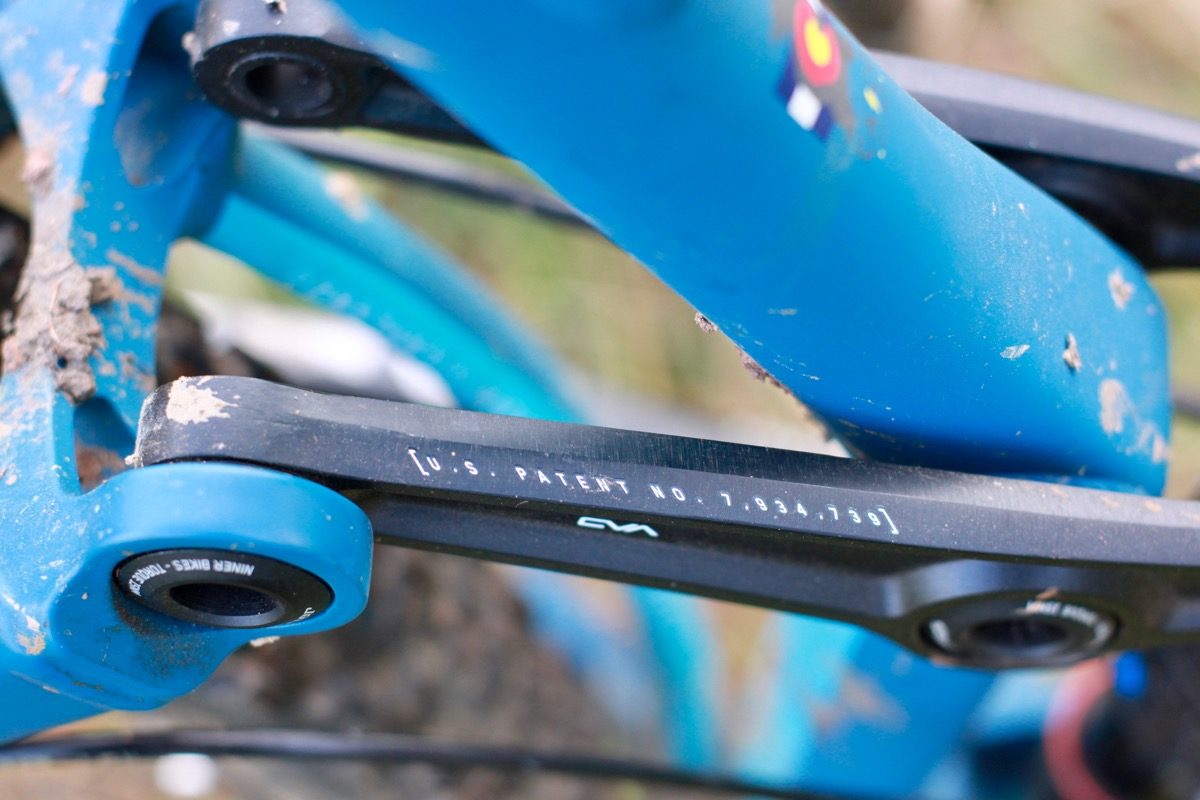 The JET 9 Alloy frame is made from aluminum and features a Niner-patented CVA suspension platform. CVA suspension may not be familiar to everyone, so here’s how Niner explains it:

CVA relies on counter acting linkage forces that are not dependent on specific pivot locations. The bottom linkage is pulled downward when you’re pedaling to negate squat, while the upward rotating top linkage is left free to react to terrain changes.

The new JET 9 Alloy frame features Boost spacing in the rear and is 27.5+ compatible, though Niner recommends bumping the fork up to 140mm of suspension travel for 27.5+ wheels. Of course many older 29ers can be converted to 27.5+, but Niner points out the new JET 9 Alloy will fit full width, 3.0-inch 27.5+ tires (and up to 2.4″ 29er tires). Niner managed to squeeze in a single water bottle mount on all frame sizes, and the frame is compatible with both internally and externally routed dropper posts.

Niner distinguishes their build kits by “star level,” ranging from the entry level, 1-star build all the way up to 5-star, ENVE wheel and SRAM Eagle kits. So while the components on the 1-star build I’m reviewing may sound pretty underwhelming, there are plenty of upgrades available for those with extra cash to spend. 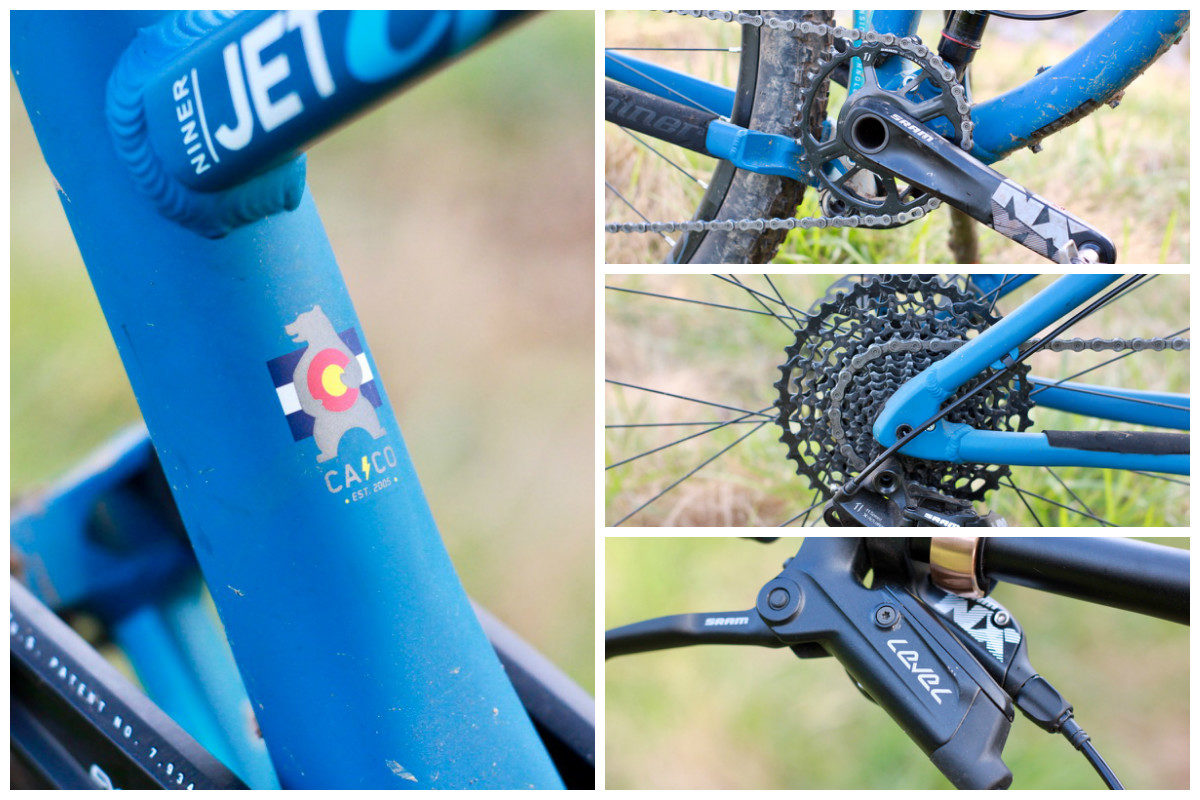 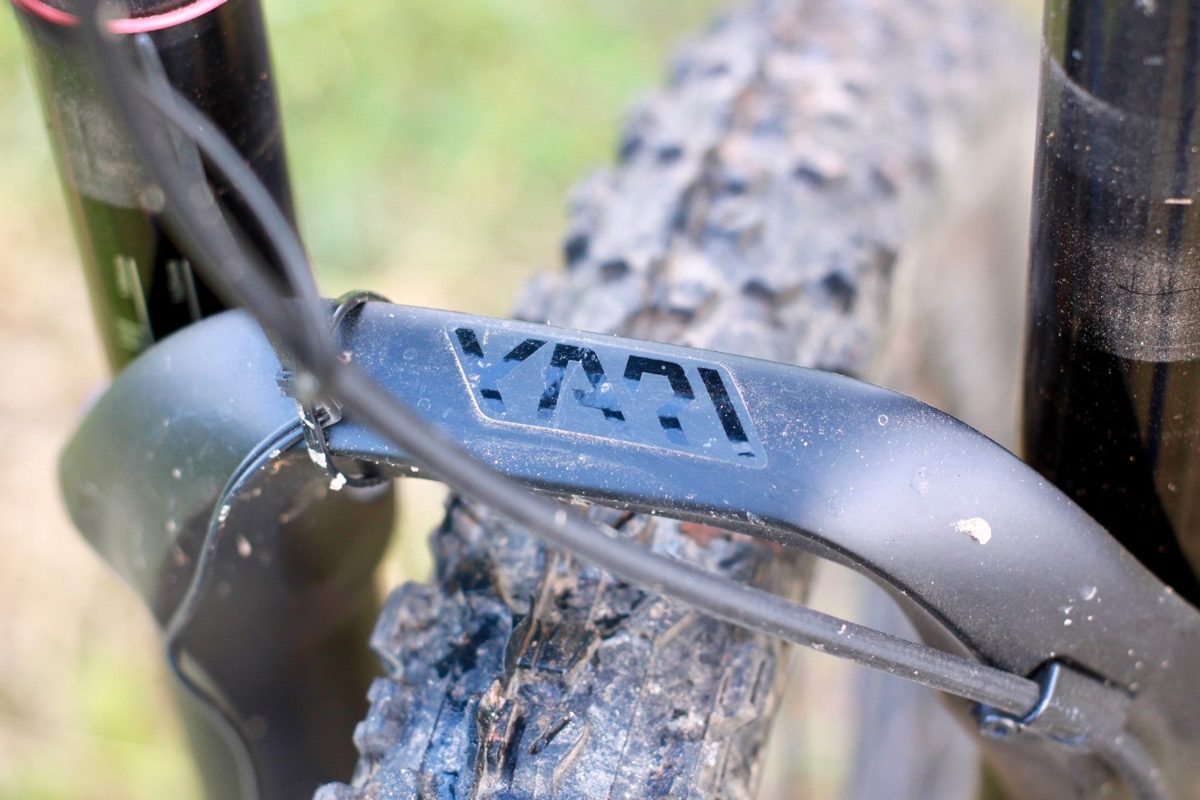 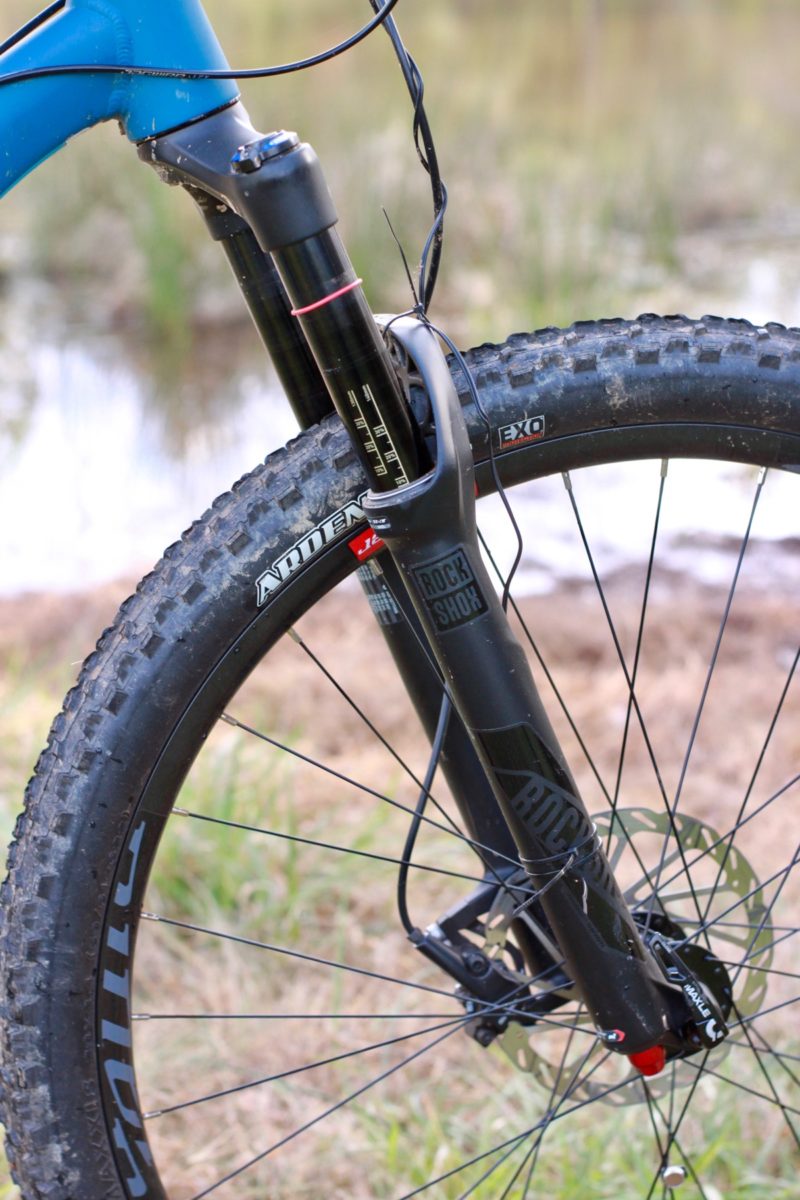 And yet, this build kit checks (almost) all the important boxes. The drivetrain is a 1×11, SRAM NX group with an 11-42t cassette. The RockShox Yari fork, while inexpensive, offers many of the same features as the Pike and Lyrik forks, albeit with a noticeable weight penalty. The RockShox RL Debonair shock is solid, as are the SRAM Level brakes. 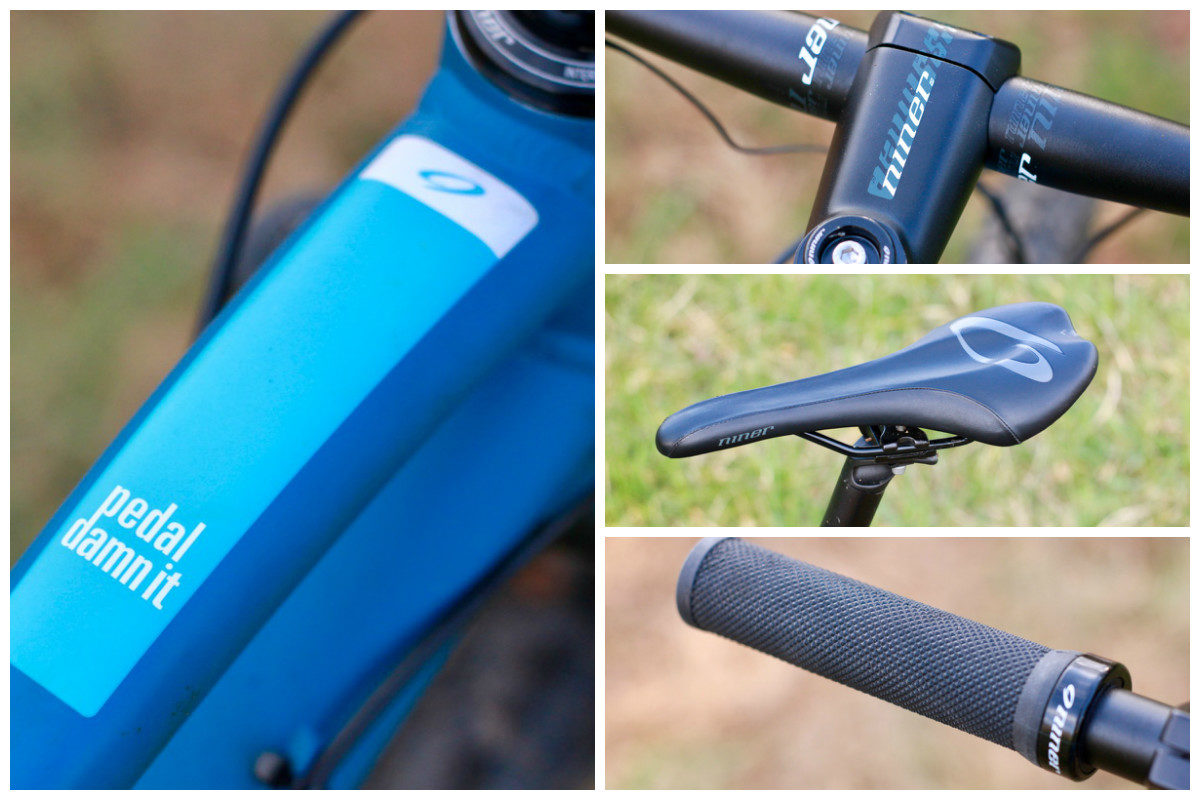 Niner specs a beefy Maxxis Ardent 2.4″ tire on the front, and the 2.25″ version of the same tire in the rear. Other than that, Niner throws in a branded alloy handlebar, stem, and seatpost along with a branded saddle, grips, and rims.

All told, the 1-star, size extra large, JET 9 Alloy I tested weighs about 32 pounds, which is certainly on the heavy side for a medium-duty trail bike. And even after riding this bike for a couple months, I never got used to how heavy the bike feels–it’s definitely noticeable.

The geometry and travel updates to the JET 9 are focused on making this bike a more capable descender, and that was clearly on display in my tests. The JET 9 Alloy just feels super plush, no matter if I’m dropping off a six-inch rock or boosting a rise in the trail at high speed.

Not only does the CVA-suspension feel deeper than it actually is, but the JET 9 Alloy proved to be very stable at high speeds. In reviewing new trail bikes, I often need some time to get comfortable before I can push them at top speeds. Not so with the JET 9. Right out of the box the JET 9 inspired confidence as I let off the brakes and simply allowed gravity to dictate my speed.

Of course all bike companies like to point out the positive effects of geometry changes without really acknowledging the obvious tradeoff that must take place. So sure, the updated JET 9 is longer and slacker which makes it better at descending, but the tradeoff must be that it doesn’t climb as well as the old version.

While I didn’t get a chance to ride the previous version of the JET 9 to make a direct comparison, I can say based on my tests that the new JET 9 certainly climbs well enough. Unlike other trail bikes I’ve tested recently, like the updated Santa Cruz Tallboy, the JET 9 steering never felt wander-y while climbing, nor did I find myself feeling more tired than usual after a long grunt. That last part is all the more impressive given how darn heavy this bike is.

However, despite feeling good on the climbs, I was left feeling a little underwhelmed with the efficiency of the CVA suspension platform when it comes to ascending. A few weeks ago I loaned the JET 9 to a friend for a group ride, and in following him on the trail for a bit, I couldn’t help but notice how bouncy the suspension appeared while pedaling and climbing. Niner likes to call this “active”–as in, “fully active suspension, all the time”–which can be really helpful, especially when it comes to improving traction on the climbs. But pedal bob is decidedly not a good thing, and it appeared to me that the CVA suspension was a bit too active at times. 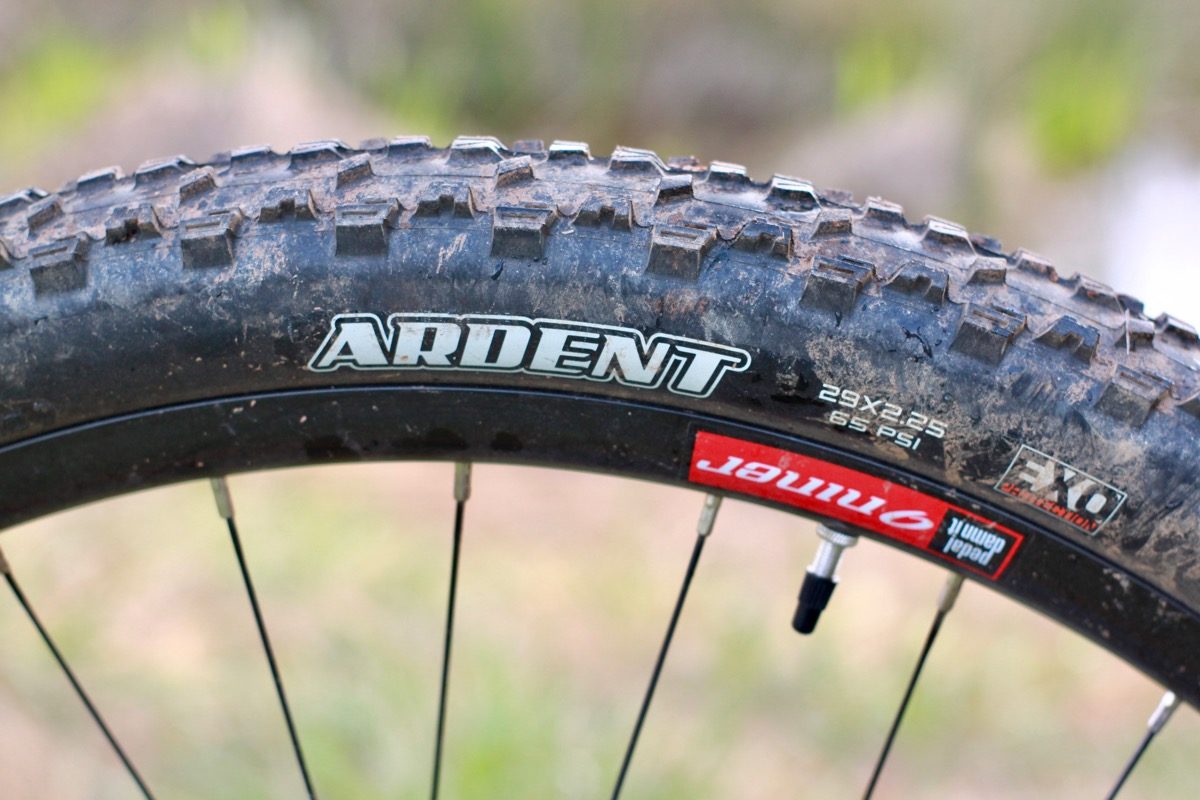 I made do with the stock Ardent tires Niner specs on the Jet 9, though if this were my personal rig I would swap out the tires for something with a more aggressive tread pattern once the Ardents wear out. The included 780mm handlebars are a welcome inclusion for many riders, though I personally think slightly narrower bars–760mm–would be more appropriate for a mid-duty trail bike like the JET 9. No biggie–cutting bars is easy; making them wider is not.

Finally, I have to address the 32lb weight of the JET 9 Alloy 1-star build. I totally understand why this bike weighs as much as it does; after all, this bike can be purchased for $2,600 which is just $100 too expensive to make our budget full suspension buyer’s guide. That’s awesome, and a lot of mountain bikers should be really happy to get a bike that rides as well at the JET 9 alloy does for such a low price. But after schlepping this bike up the office stairs a dozen times, lifting it in and out of the bike shed, and feeling just a little bit grounded every time I tried to get the wheels in the air, I came away just a touch disappointed. I really love how the JET 9 Alloy rides and how affordable it is, but I was never able to stop thinking about how heavy the bike is. Maybe I should talk to someone about my weight weenie complex…

I came away from my test of the Niner JET 9 thoroughly impressed with the quality of the ride for such a reasonable price. Mountain bikers choose trail bikes for their versatility, and with the updated geometry and suspension specs on the JET 9, Niner has created a bike that balances descending performance with climbing efficiency in a modern, attractive package.

Thanks to Niner for letting us borrow this bike for review.