Ever since I first heard of the new Yeti SB4.5c back in August, I was eager to swing a leg over this new rig and take it for a rip! I had long counted the SB95 as one of the best bikes I’d ever ridden, so I was interested to see how the 4.5c would compare.

Ultimately, comparing these two bikes is an exercise in futility. The SB4.5c is all-new, and I found it to ride very differently. 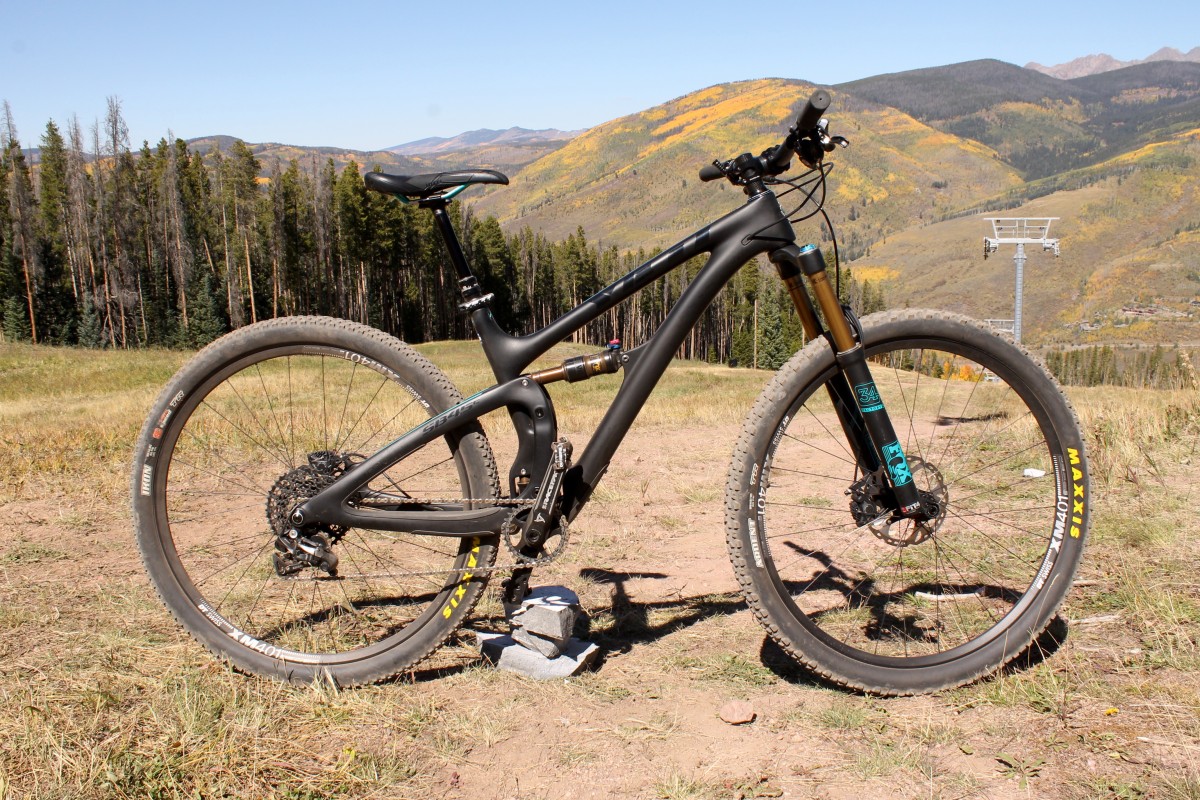 The SB4.5c is built using Yeti’s relatively-new Switch Infinity suspension design. With all of the new Switch Infinity bikes that they’ve rolled out this year, don’t expect this suspension design to go anywhere anytime soon! While I haven’t personally been able to test out its long-term durability, based on conversations with people who have, there have been little to no long term durability issues with the linkage–so let that put your mind at ease.

The bike I tested was mostly–but not exactly–the X01 build. My test rig was sporting a SRAM X01 drivetrain with a RaceFace crank and chainring, DT Swiss 350 wheels (set up Boost), Maxxis Ardent 2.4″ tire up front and Maxxis Ikon 2.2″ tire in the rear, SRAM Reverb dropper post, and Shimano XT brakes. According to the Yeti website, the stock X01 build will come with SRAM Guide RSC brakes.

My tester was sporting the stock Fox 34 fork, which interestingly boasts 140mm of travel. We’ve seen quite a few bikes with front and rear travel disparity over the last couple of years, but generally it’s only 5-10mm. With 114mm of rear travel and 140mm of front, that’s a pretty significant 26mm of difference.

But how did the bike feel when the rubber hit the trail? That’s the important part… read on to find out.

I tested the SB4.5c at the new Vail Outlier festival. Now, testing an XC/trail bike at a ski resort isn’t the most ideal situation, so I intentionally skipped the bike park, downhill-only trails, and rode the two-way singletrack on the mountain. The test trail I rode was much more like a classic singletrack that you’d find anywhere in the mountains–not just at a ski resort. Still, I did take the chairlift to the top of the mountain. There were a few short pedally sections in this two-way-traffic trail as I went down the mountain, but the climbing was minimal. 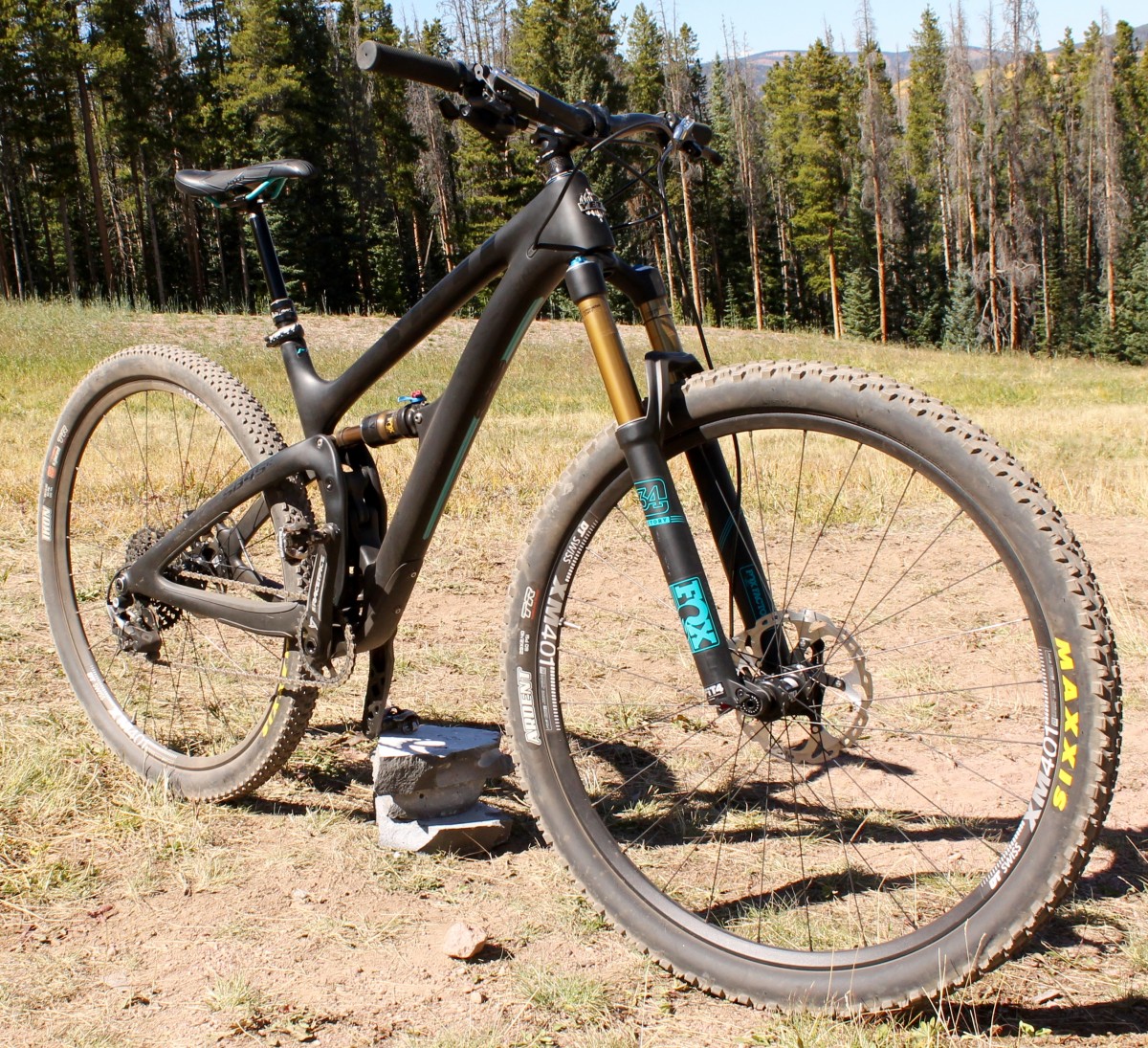 Despite relatively minimal access to climbing, I could tell that the SB4.5c had no qualms about going fast when the legs start spinning! At less than 26 pounds, this rig is light, and the suspension works as advertised, delivering maximum power and control to the trail. I could easily see racing cross country or endurance events aboard this bike!

But ultimately, most of my time riding the SB4.5c was spent riding downhill–and with only 114mm of rear travel, the bike was astonishingly capable! I rode everything that you could expect from a classic backcountry descent: tight switchbacks, high speed descents, fast corners, roots, rock gardens, whoops, jumps, loose dirt, loam–all things considered, this was an extremely varied test track.

The SB4.5c tracked splendidly through rock gardens, turns, and roots. However, the stock 2.2″ Ikon in the rear just couldn’t maintain traction in the looser conditions and more aggressive corners–I slid out the rear wheel a number of times, but a quick foot plant saved the day. If it was my rig, I’d bump up the traction on the rear end with an Ardent. If you want to go really aggressive, you could swap the Ardent from the front to the rear, and put a High Roller II up front.

While the bike performed admirably through the tech, it was very uncomfortable at high speeds, with water bars and small rock sections. While the head tube angle isn’t unduly steep at 67.4 degrees, I found the SB4.5c to be nervous and skittery at high speeds. I’d put some of this handling down to the tire choice, but the rest is the bike. Also, I bottomed out the rear end multiple times on very small hits at medium to high speeds. With 114mm of travel perhaps this is to be expected, but I didn’t experience any harsh bottom out effects on a similarly-spec’ed bike, the Pivot Mach 4.

When referencing the bottom out effect of the rear end VS the confidence of the fork, I’d hazard to say that the suspension did feel a bit unbalanced when descending at high speeds. However, at more moderate speeds, the front and rear of the bike jived well.

I heard a few attendees at Vail Outlier dub the SB4.5c as a “do it all” bike. I disagree strongly with that statement. Rather, I’d peg the SB4.5c as a capable go-fast cross country bike, with the chops to take on some aggressive big-mountain descents in the backcountry. However, don’t plan to race this in an enduro, and don’t plan to tackle any serious downhills at any speed aboard this bike.

The reality is, Yeti has fantastic bikes for a bit more aggressive riding with still-great pedaling geometry (the SB5c) and full-blown enduro shredding (the SB6c). If those use cases are what you’re aiming for, stick to those bikes.

But if you like to drop the hammer when you climb, you pedal at top-speed at all times, but you don’t want to be scared to death on the descents, then the SB4.5c is for you.