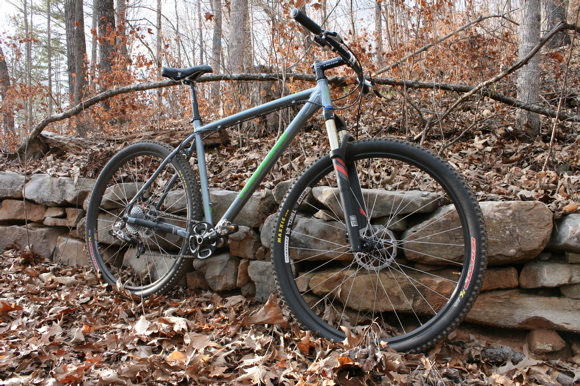 Some of you may have heard by now that I finally got a new mountain bike after riding the same Trek 7000 hardtail for the past 10 years. The Trek is still operational and it’s a little bittersweet looking back on all the trails I’ve ridden on that bike (more than 150 from Utah to Vermont) but I’m super stoked about my new wheels: the 2009 Redline d660.

I got a chance to demo the Redline d660 at Interbike back in September and it was by far the best 29er I had ever ridden. I had been looking for a new bike for several months and I went back and forth on the idea of getting a dual suspension XC bike or another hard tail. I also had this crazy idea that I might want to go single speed to keep things super simple and low maintenance but in the end I realized a single speed is a bit too limited for my primary rig.

Anyway, it turns out the d660 is sorta the best of both worlds since it’s a 29er and rides like a cross between a hardtail 26er and a FS 26er (though obviously closer to the hardtail than the FS). Also the gearing on the d660 is 1×9 which is basically a single speed crank with a full 9-speed cassette. The front derailleur on my old bike actually stopped working about a year ago so I was already used to staying in a 9-gear range 🙂

I’ve only been riding the Redline for about a month now but I can already tell this is just the start of a long and beautiful relationship. Since the bike came only partially assembled I got the chance to install the derailleur and brakes myself and now I baby it every time I get back from a ride (I’ll let you know how long that lasts). Yesterday I had one of my best rides yet at Yellow River where the flow on the bike felt amazing and super responsive.

Well, even though I have already heard of you new MTB a month ago I still would like to say:

First and foremost a big CONGRATULATIONS to you trek7k on your new MTB purchase!

I really do not know if 2009er is the year of the nines – 9-speeds, 29-inch wheels, and 9-lives on the trail, but I will say that I also ride on a 9 speed (36T – 12/36T combo) and I love it. No complications with two dérailleur’s like in the past or like on my other rigs. I think that the 29er’s are sweet for hauling cross country, but for my riding style/discipline they just would not work for me. I am a freerider/downhiller by heart but do love some real aggressive XC riding mixed in with some aggressive AM when not freeriding or downhilling, but this is me, and I love it. I will say this, Redline does make some very fine MTB’s, especially BMX or jumping bikes. I grew up on Redline, Diamondback, Mongoose, and Haro’s and raced for Redline as well as Diamondback when I BMX’ed, so I do know there quality they put into their bikes. Again, CONGRATULATIONS on your new MTB purchase and I hope that you will make as many or better memories than your previous MTB (Trek 7000). Good luck and good riding on your new-found rig trek7k.