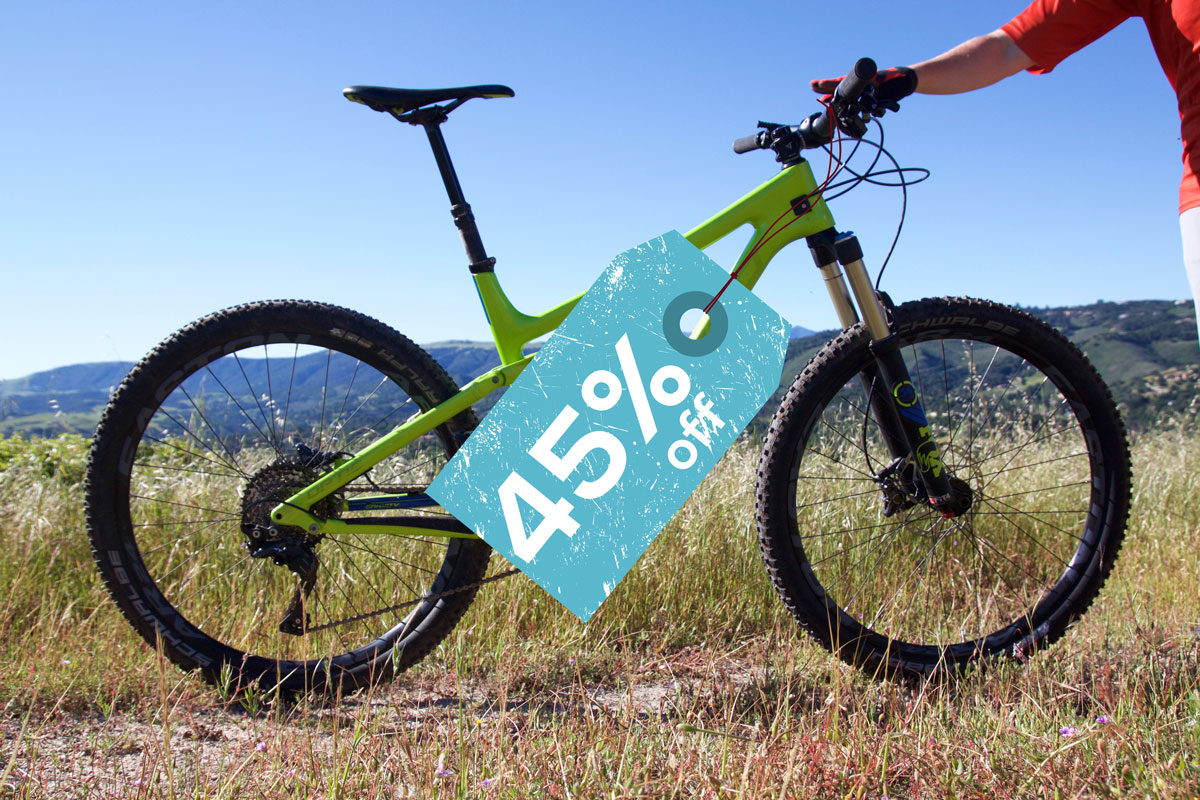 Everyone understands that new cars lose their value quickly, but I was curious to know whether mountain bikes depreciate in the same way. So, I researched sales prices from completed eBay auctions for nearly 100 popular mountain bikes, and also noted bike values on BicycleBluebook.com to double-check my work. Here’s what I found.

For this analysis, I looked at popular mountain bikes from Trek, Specialized, Giant, and Santa Cruz, since these companies tend to sell the most new bikes, and therefore there is a good supply of bikes from these brands being sold used. On average, these brands’ 2016 mountain bikes are currently selling for 45% of their original MSRPs. Interestingly, there isn’t much of a difference between the brands: the brand with the worst, year-1 resale average decline is 46%, while the best brand is 44%. This makes me think the 45% decline might just be universal.

Compared to new car depreciation, mountain bikes are in a class of their own. According to CarFax, new vehicles lose (just) 15-25% of their value each year. Cars also lose 10% of their value in year 0, which is basically the value lost the moment the car drives off the lot. I only found one 2017 bike on my list that sold on eBay this month, but sadly that one sold for 47% less than the MSRP. (Note to self: stalk eBay for current model year bikes and buy them.)

Of course, not everyone pays full MSRP for a new bike to begin with, so these losses might not be as bad as they seem. I’ve always negotiated new bike purchases with my local bike shop, and my guess is others do too. I don’t have any solid numbers on the actual sales prices for new bikes compared to their list prices, but my guess is current model year bikes get discounted by 10% at most through negotiation, promotions, etc.

Shop employees and others in the industry do get larger discounts off list prices, so this may put some additional pressure on used bike sales. Many companies that offer industry discounts stipulate that the bike can never be re-sold for this very reason. So, my guess is while some used bikes on the market were purchased at a significant discount, the majority of the used bikes being sold are not. Even if many of the bikes are being sold by industry folks, it doesn’t change the fact that if you’re trying to sell your bike, you have to price your bike according to the going market rate.

What About After Year 1? 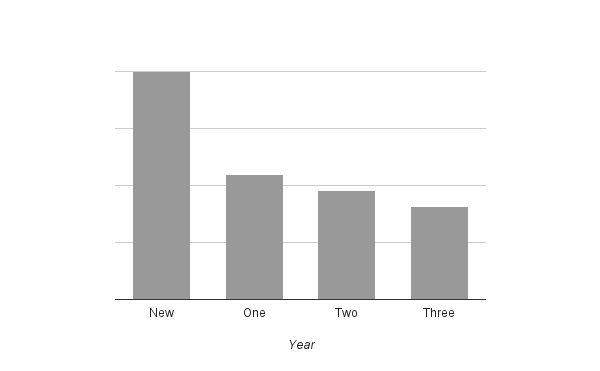 The good news is, mountain bike values appear to stabilize somewhat in years 2 and 3. According to my research, 2-year-old bikes are selling 52% below their original MSRP, which is just a 7% decrease from the year 1 value. Year 3 is surprisingly similar, showing bikes losing another 7%, landing at 59% off MSRP.

Admittedly I found fewer 2- and 3-year-old bikes in my research set, but looking at the value ranges BicycleBluebook.com provides for similar bikes, this seems to be pretty close to accurate. Rather than provide an average sales price for used bike models, BicycleBluebook.com gives several value ranges based on a bike’s condition. For example, of the models I checked, on average, in year 1, bikes lost 38% of their value if they were in excellent condition compared to 62% if they were only in fair condition. Looking at the change from year 1 to year 2, the examples I pulled from BicycleBluebook.com lost an additional 5-7%, and another 2-4% from year 2 to year 3.

Beyond year 3 I wasn’t able to come up with a lot of good data, though that data certainly exists. My hypothesis is there is another sharp drop in a bike’s value once it gets beyond a certain age due to the obsolescence of parts or technologies.

As I stated earlier, this analysis only looked at about 100 eBay sales completed in January, 2017, and only focused on about 6 popular mountain bike models from top brands. Of course there are plenty of other places people sell used bikes other than eBay, so pricing might be better or worse for other channels. It’s also possible that January is a particularly bad or good time for selling used bikes, which could skew these results.

Then, there’s the matter of component upgrades. Finding two used bikes that are completely identical in parts spec is virtually impossible since owners regularly swap out parts due to damage or personal preference. Just skimming through the listings I included in my data set, I got the sense that if anything, the bikes being sold included parts that were as nice or nicer than those that came stock, but again, this isn’t quantified in the results. It’s also difficult to quantify how hard a bike has been ridden, though the BicycleBluebook value guide does attempt to quantify this a bit by giving value ranges based on bike condition.

Every used bike on the market is different, and for that reason there is a wide range of expected resale values for each one. But if you’re banking on trading in your new mountain bike after riding it for just one year, think again. Even though mountain bikes appear to lose much of their monetary value over time, that doesn’t mean our enjoyment of them has to wane. It’s still up to the rider to maximize time in the saddle to soak up all the real value!

What’s your experience: Have you ever bought or sold a used bike for a crazy low or crazy high price?

News
'Dirty Kanza' Cancels 2020 Event and Will Change its Name,...
News
The new RockShox ZEB is a Fox 38 Rival
Beginners
What do you mean 'Better Brakes Will Allow you to...
Women
🤔 What Do You Think? A Women's Mountain Biking Survey