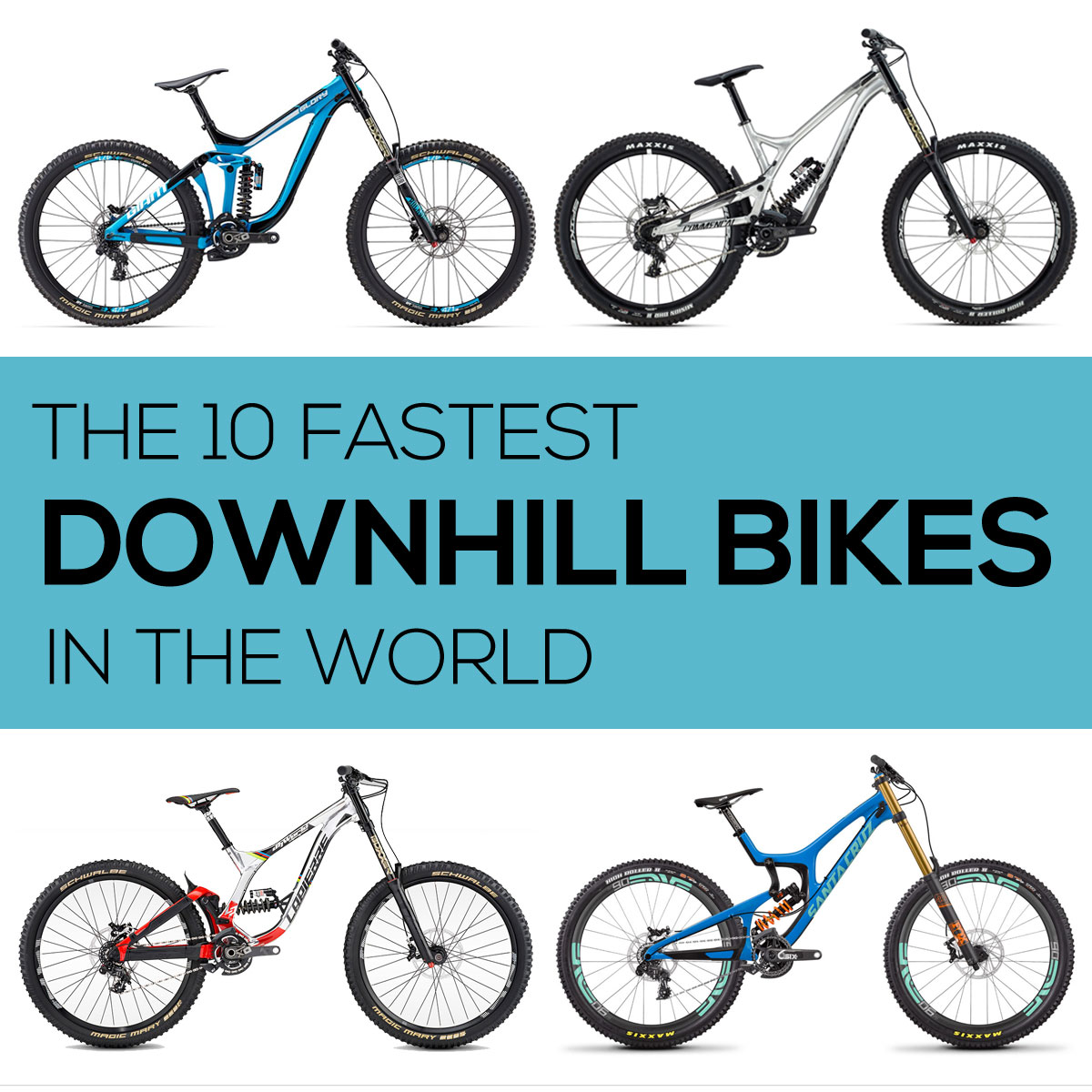 Downhill racing is arguably the pinnacle of mountain biking. Since top World Cup racers frequently reach speeds in excess of 40 MPH – and bash their machines into obstacles at full gas that many of us would need to walk down – their bikes need to be massively capable. This means the frames must be stiff, (relatively) light, and strong. The suspension needs to be supple enough to maintain traction, but also able to handle huge compressions. Brakes need to be powerful enough to stop riders quickly and safely. Wheels must be strong enough to blast through rocky sections without detonating. Tires have to absorb enormous cornering forces and be durable enough to keep air within their carcass.

Of course, a bike can’t win a race by itself – a talented rider is a large part of the equation. However, we couldn’t help but wonder which downhill bike could claim the title of “World’s Fastest” – based, of course, on race results.

To come up with this list, I compiled race results for the past five World Cup Downhill seasons. Since time gaps at the Elite level can be tight, and in an effort to broaden the data set, I went ten places deep for each event, rather than just including the top three riders. It’s also typical that riders will switch teams during their careers, riding for several different manufacturers. Aaron Gwin has ridden for Trek, Specialized, and YT over the years, to use him as an example. The results are from the regular World Cup season as well as the World Championships.

This time period in DH racing, 2012-2016, is actually quite significant. Over these few years, practically every team made the jump from 26″ wheels to 27.5″ wheels. In addition, DH bike geometry went through a bit of a renaissance with the bikes getting slacker head tubes, longer reaches, and increased wheelbases. For most teams, the switch to 27.5″ wheels happened at some point during the 2014 season. By 2015, nearly all of the top teams had fully-adopted the larger wheels. I’m betting more than a couple companies lost their asses on DH bikes during this period.

For instance, Specialized’s riders began racing aboard a carbon fiber version of the Demo 8 in 2012 – a bike with 26″ wheels. That bike was available to the public in 2013, but the very next year Specialized developed an entirely new bike with a carbon frame and 27.5″ wheels. Carbon molds are extremely expensive, and it’s not like DH bikes are big sellers. Specialized essentially had one year to recoup the costs from that carbon 26″ bike, and my guess is that didn’t happen. But then again, if you want to be in the mix at the top of this sport, companies – and riders – are going to have to take some risks. Sometimes, they aren’t going to pay off.

Also of note, carbon fiber as a frame material has still not completely taken over in DH racing. In fact, four of the bikes on this list are only available in aluminum. Part of the reasoning may again be the small sales volume of DH bikes and the expense associated with carbon manufacturing.

Where will downhill racing go from here? Will we see 29er DH bikes? Can Aaron Gwin surpass Greg Minnaar as the winningest rider in World Cup history? And perhaps most importantly, will the UCI lift the ban on skinsuits? Only time will tell.

What follows is a deep dive into the world of downhill bikes. Hopefully, you’ll enjoy reading as much as I enjoyed putting it together. So, strap on your full face helmet, put your goggles on, and wait for the beep – we’re going racing!

Commencal is a relatively small, direct-to-consumer brand based in Andorra – a tiny principality high in the Pyrenees between France and Spain. Despite it’s small size, or perhaps because of it, Commencal has been quick to adapt to changing trends in mountain biking. As noted, they jumped on the 27.5″ bandwagon early, but one thing they haven’t been quick to jump on is carbon fiber. Max Commencal, the company’s founder, cites both environmental and ethical objections to building bikes out of the fantastic plastic.

Commencal’s status as a consumer direct company allows them to offer their bikes at some pretty incredible prices. For instance, their top-level build on the Supreme DH V4.2 (shown above) rings in at $4,500.

Please just put this all on one page. Please.

Wow…a LOT of time and research went into this. Great article Aaron…thanks!!

Thanks dude! It quickly became a massive undertaking.