Smartphone GPS apps have come a long way in just a few short years – but don’t count out the dedicated GPS unit for mountain biking just yet. This year at CES, manufacturers announced new devices and form factors that you’ll want to know about if you’re thinking of getting a GPS for mountain biking.

Magellan Switch and Switch Up 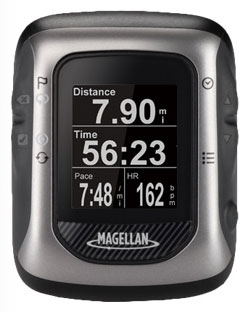 Many manufacturers have pulled back from offering GPS units with all the bells and whistles, instead focusing on durability and even wearability, something smartphones can’t compete with. Magellan has always been an also-ran compared to Garmin in the fitness GPS category but this year the company is releasing the Switch, a wristwatch GPS unit that can also be mounted to your handlebars. 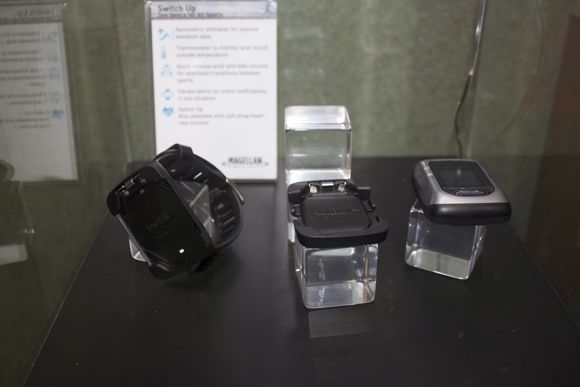 The Switch Up features a “quick release” mount, making it easy to transition from wrist brand to handlebar.

The Switch packs a high sensitivity GPS chip set and eight hours of battery life plus it’s water resistant enough for triathletes to use while swimming. The “Switch Up” adds a barometric altimeter for more accurate elevation readings plus a thermometer. Of course you can also pair the device with a heart rate monitor or other ANT+ devices for even more fitness data collection. Pricing will start at $249.99 for the base model. 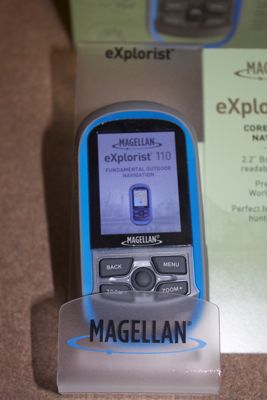 At Outdoor Retailer, Magellan was also showing the new Explorist series and while the top of the line models suffer a bit of smartphone envy (touch screen, integrated camera), the company is offering an entry level model for just $129 MSRP. The Explorist 110 features a color screen and integrated world map basemaps with roads, water features, and parks included. I previewed some of the basemaps at Outdoor Retailer last week and they appear to be almost as detailed as a basic Google Map. 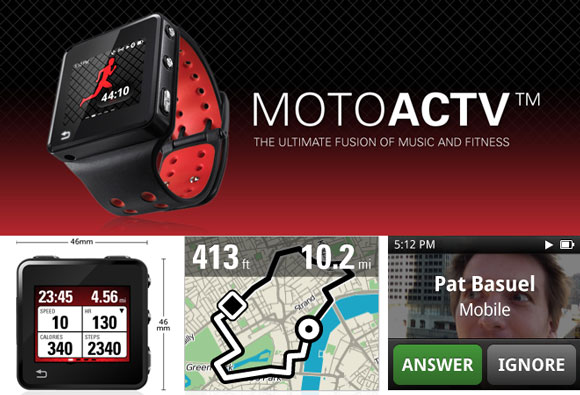 Magellan isn’t the only company getting into the fitness GPS market – Motorola wants a piece too. The MOTOACTV combines a Bluetooth and ANT+ compatible GPS with an MP3 player for one of the most fully featured wrist devices we’ve seen. With a touchscreen color display, the MOTOACTV is sorta like a mini smartphone you can wear on your wrist – with Bluetooth it even lets you answer phone calls while you’re riding!

Unlike the other wearable GPS units we’ve seen, the MOTOACTV appears to offer decent mapping on the trail. And with ANT+ compatibility, you can sync power meters, cadence sensors, and heart rate monitors for detailed data collection during your ride. The MOTOACTV starts at $249.99 (wrist strap not included).

Talk about a lack of bells and whistles – the AGL3080 doesn’t even have a display screen! This unit is designed to be a GPS photo logger but you can also use it to map your MTB rides. Just turn it on and the LEDs let you know when it’s got a satellite fix. Step 2: ride.

Sure, the AGL3080 can’t help you when you’re lost but it is great for mapping and for adding location data to the photos you snap on the trail. Because it doesn’t have a screen, the AGL3080 can run for at least 20 hours on its AAA batteries and can store up to 1 million track points (as a point of comparison, the entire 1,500+ map singletracks database has just over 2 million track points). Perhaps the best part is you can usually find the AGL3080 online for less than $80.

These wearable and simple GPS units may not be for everyone but it’s definitely a category for mountain bikers to watch this year. What kind of GPS / cycling computer are you using these days?

I use a wearable unit on all of my rides, mostly mounted to the handlebars: The Garmin Forerunner 305. Seems more basic than most of these units here, but it works great for my needs. The motorola device looks pretty cool: I like that you can actually view a decent map of your ride. I don’t think I’d ever be connecting it to my phone, though. I go out on the trails for peace and quiet! 😉

I have been rockin’ a Garmin 60CSX for a while now and love it. I couldn’t wear a watch while I ride.

Great article. I am looking for a GPS right now. These are certainly all being considered now.

I like the look of the magellan, but the price tag is not conducive for the other fun things I want to buy right now. Maybe after I get a new mountain bike, I’ll consider something like that.