The Mammoth was Maxxis’s initial entry into the fat bike tire market. Since they launched this tread, they’ve released three other treads for full-blown 5″ fat-tired bikes. While 5 inches seems to be the fat bike tire width that’s most likely to last for the long haul, plenty of riders out there are still rolling on–and purchasing–4″ fat bikes, myself included. I mounted up the Mammoth tires on my Bike Nashbar Big Ole Fat Bike and took to the trails to see how these tires would perform. 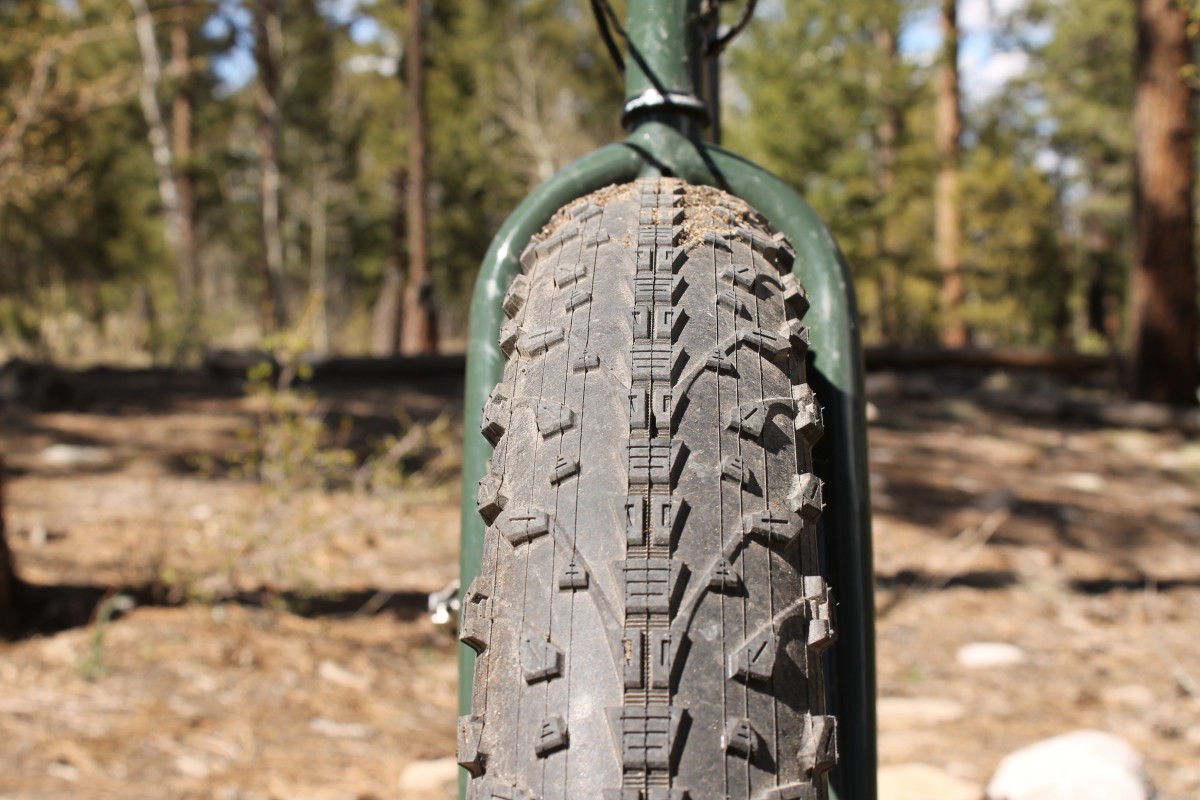 The Mammoth is a full 4.0-inch fat bike tire with a foldable bead and dual compound design. There are two different TPIs available (120 and 60) and three different technologies. For all of the possible permutations, be sure to check out Maxxis’s website. 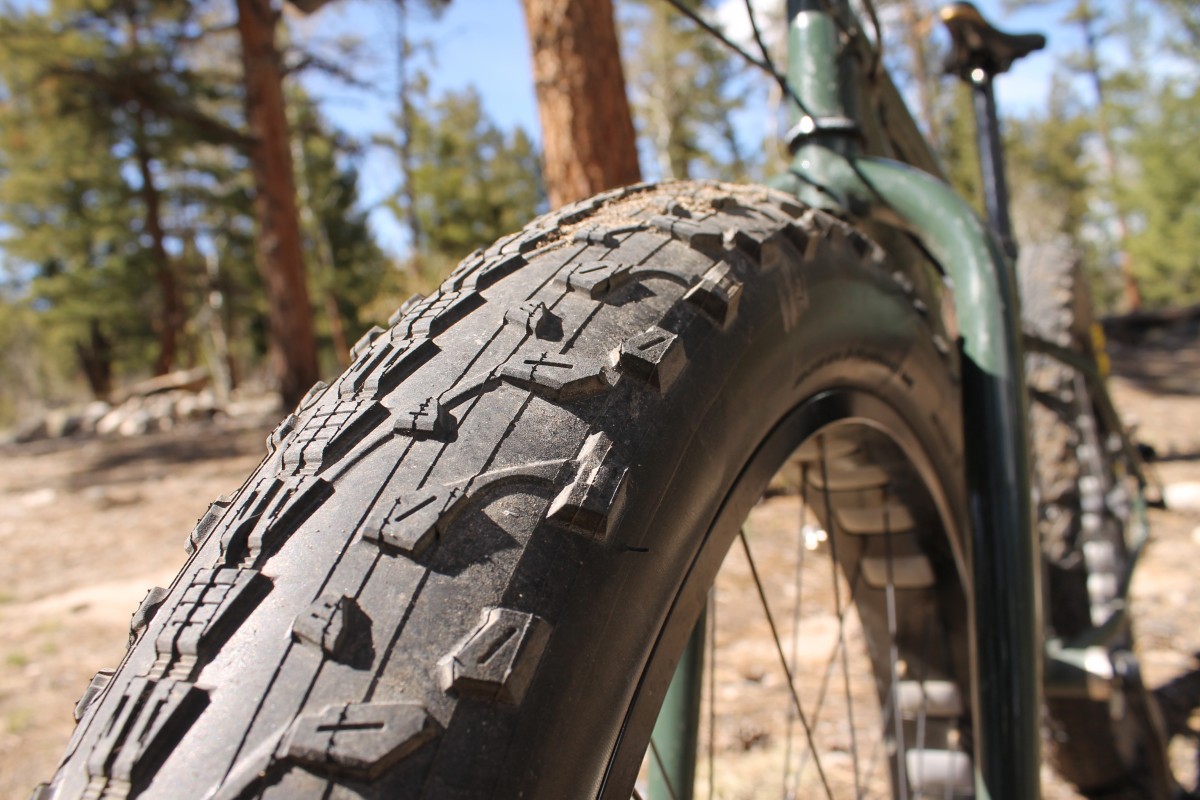 On my rims, the tires rounded out well with a tread pattern that promised to transition easily from side-to-side–not an easy feat in a 4-inch-wide tire. Interestingly, the lugs on the tire were very low profile–how exactly would this tire perform in snow, sand, and hardpack? Only true testing would tell.

I first began testing the Mammoth during dry summer conditions, and I instantly fell in love with its handling on dry terrain. The low profile lugs and the transition zones made for a fat bike tire that handled just like you’d expect a standard mountain bike tire to handle. The thing is, that’s not really all that common for fatties. Many fat bike tires tend to flop to one side or the other in dry conditions, or in the worst scenarios, they auto steer viciously, making handling an absolute nightmare. Aboard the Mammoth with appropriate tire pressures, I experienced none of those ill effects. 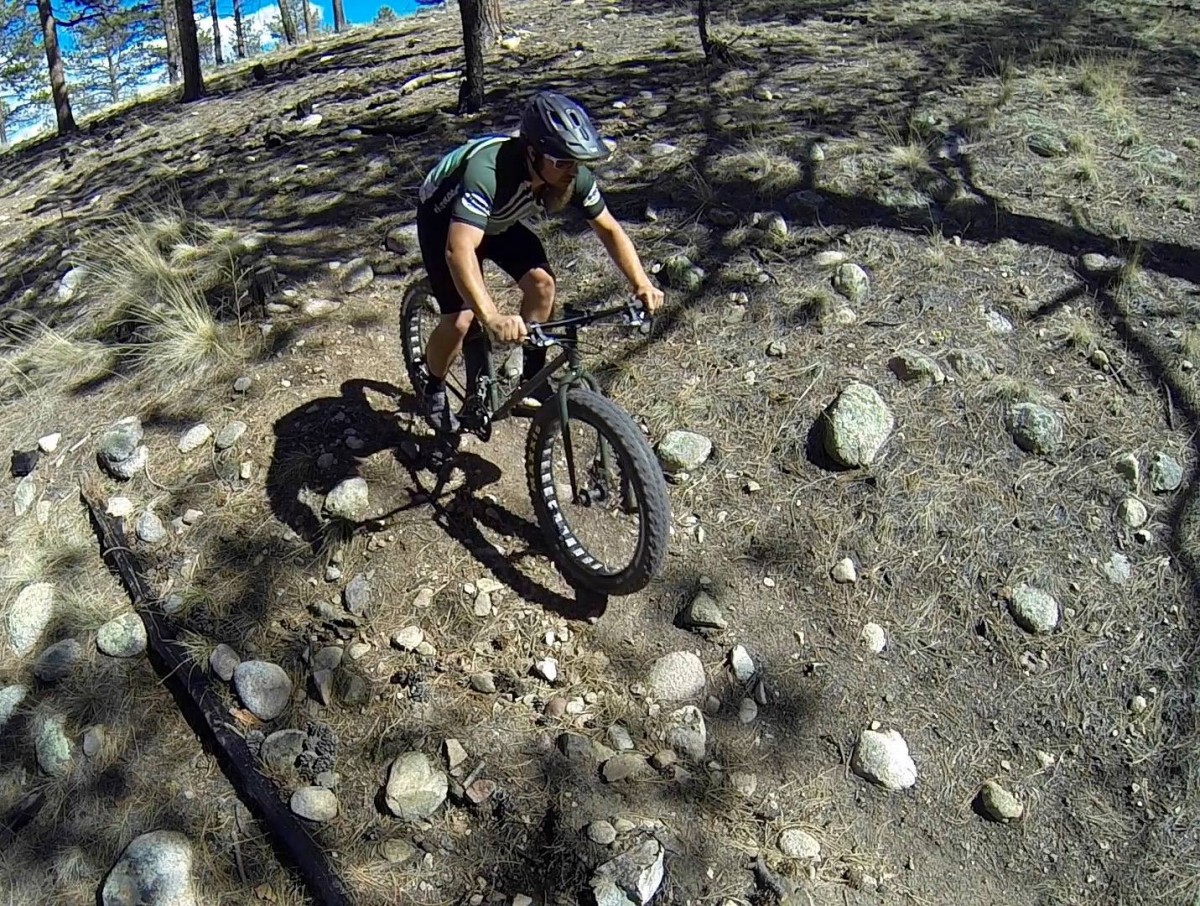 After pedaling hardpack I decided to head to the deep sands of the Four Mile area near Buena Vista, Colorado. Renowned for long stretches of deep sand churned up by motos, ATVs, and jeeps, what most people don’t know is that there’s plenty of legit singletrack hidden off of those sandy roads. So, the fat bike is the natural weapon of choice to access those areas: pedal in through the sand, slay singletrack, pedal back out.

The Mammoths handled the sand admirably, but as it got especially deep and the grades got steeper, my rear tire began spinning and spitting a little bit. It was nothing I couldn’t handle, but as I felt that minor loss of traction, I asked myself: how would these handle in the snow? 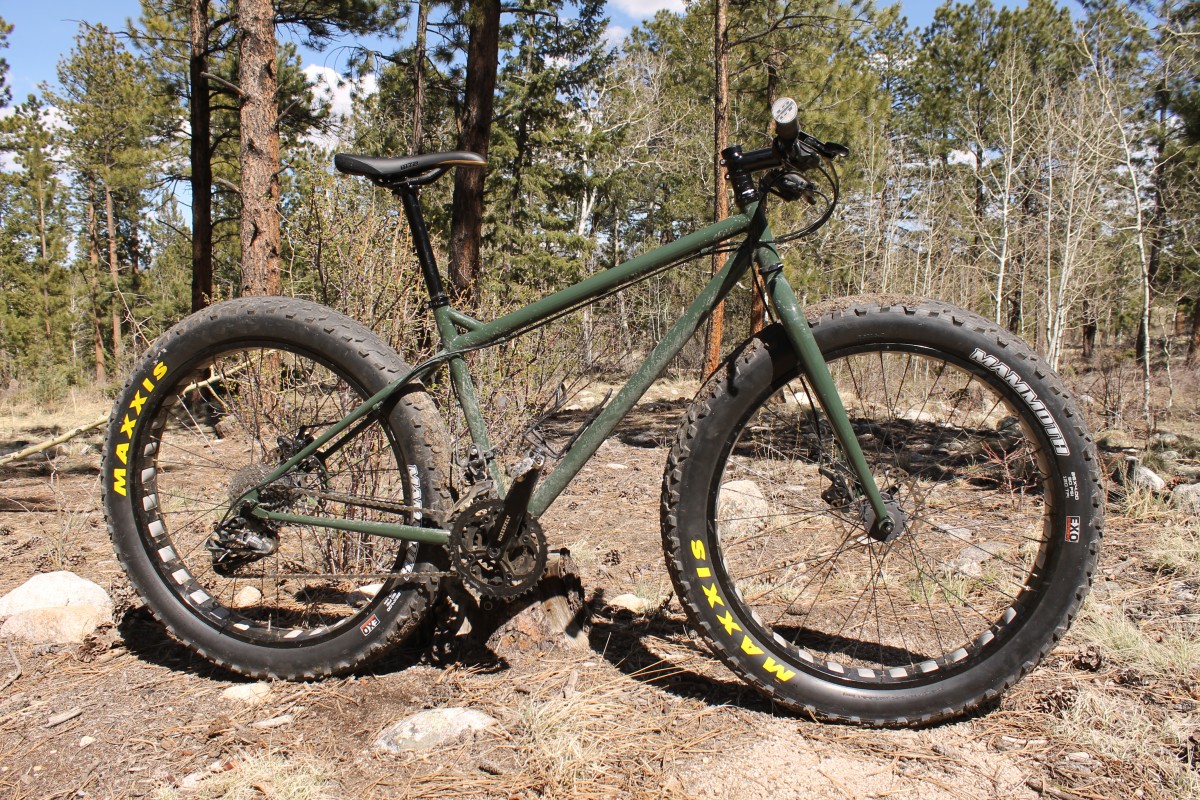 A few weeks later I had the chance to find out. My first snow ride aboard the Mammoth was in a couple of inches of untracked powder, and while I managed ok, traction was even further diminished versus sand. As the snow continued to pile up and I took to partially-packed terrain interspersed with relatively deep, soft snow, I quickly learned that the Mammoth would not be my go-to snow tire.

As a caveat, I would mention that if you do find a well-groomed trail that’s packed in hard, and you’re running low enough pressures, you can probably get by with the Mammoth. However, if snow conditions are at all variable, you’re likely to have trouble. And even in groomed conditions, you’ll most likely have a more confidence-inspiring ride with a more heavily-lugged tire. 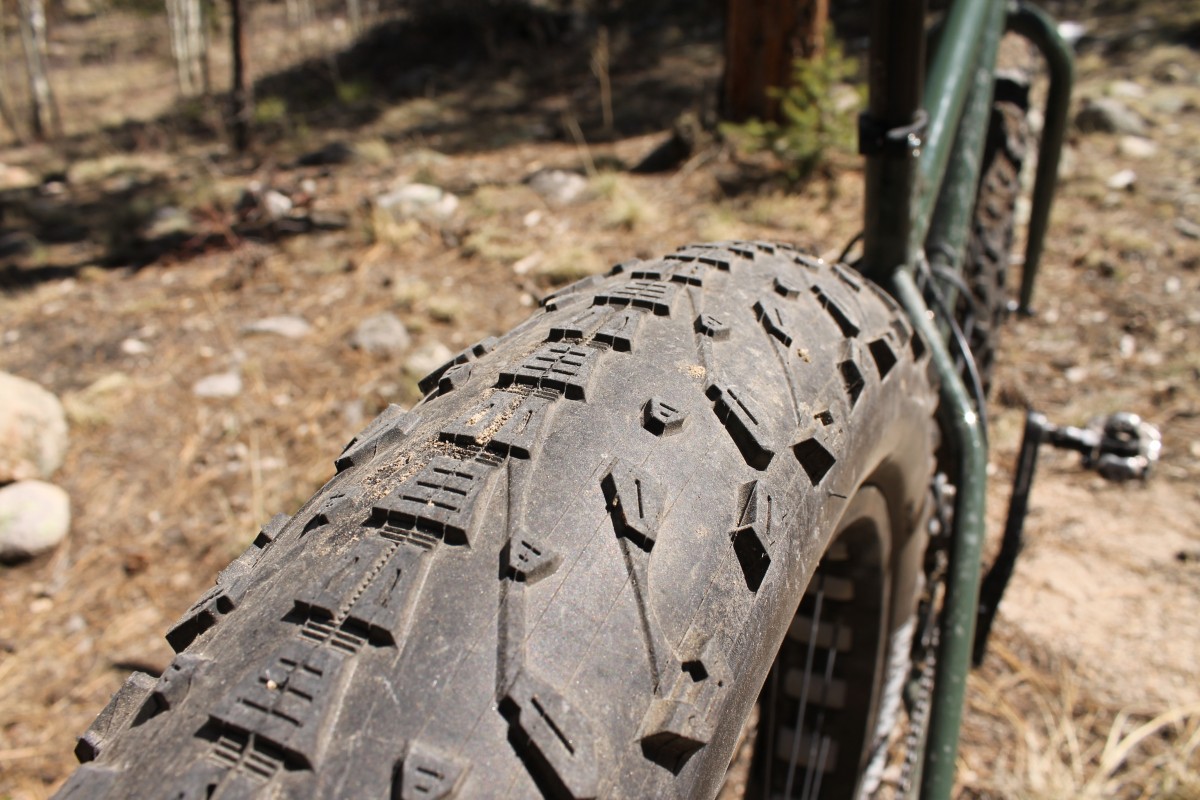 The bottom line is that the Mammoth is ideal as a dry conditions fat bike tire. Even in deep sand, the Mammoth powered through, and the predictable, natural handling on hardpack make this tire a summer fat bike winner. Especially for bikes like the Salsa Bucksaw which seem to be positioned more for riding in dry conditions, the Mammoth would be an excellent choice.

Thanks to Maxxis for providing the Mammoth tires for review.

Good review, Greg… but this is what I find interesting, “While 5 inches seems to be the fat bike tire width that’s most likely to last for the long haul…”
I’ve often wondered about that, as a southerner not having to deal with too much snow, how fat is too fat for when there isn’t much snow? Is it still as much fun on the 5″ tires compared to something smaller? Or do you just park that bad boy generally in warmer weather?

Hey fatlip11, everyone is going to have a different opinion on this, for sure. Here are my 2 cents.

Personally, I sometimes ride my fat bike on dry dirt, but generally once summertime hits, I park the fatty until the snow begins to fly again. If I wanted to add some bigger width to my wheels but didn’t often deal with serious snow or deep sand, I’d go with a 27.5+ tire, which generally measures about 3″ wide. That’s going to give you many of the benefits of higher volume and wider width without some of the drawbacks.

If you’re wanting to go fatter still but again, are mostly running dry conditions, the full suspension Salsa Bucksaw with 4″ tires is a great choice!

Let me know if you have any other questions!

my Alaskan carbon came with mammoths. I was disappointed with handling under low pressure, but haven’t got enough information to make an informed decision. I think out would shine on a buck saw, riding dirt. I road rite up some crazy strap cc ski trail on them last fall. thanks for reviewing, looking forward to some more. I can’t afford to go around testing a bunch of fat tires, so it’s very helpful.

Nice review, I’ve had the mammoths on my mukluk since last summer and find them to be a good , fast-rolling dry conditions tire. Just wondering what psi you’ve found works best?

I’ve found 6-8 PSI to be pretty good in dry terrain, depending on the consistency of the surface.