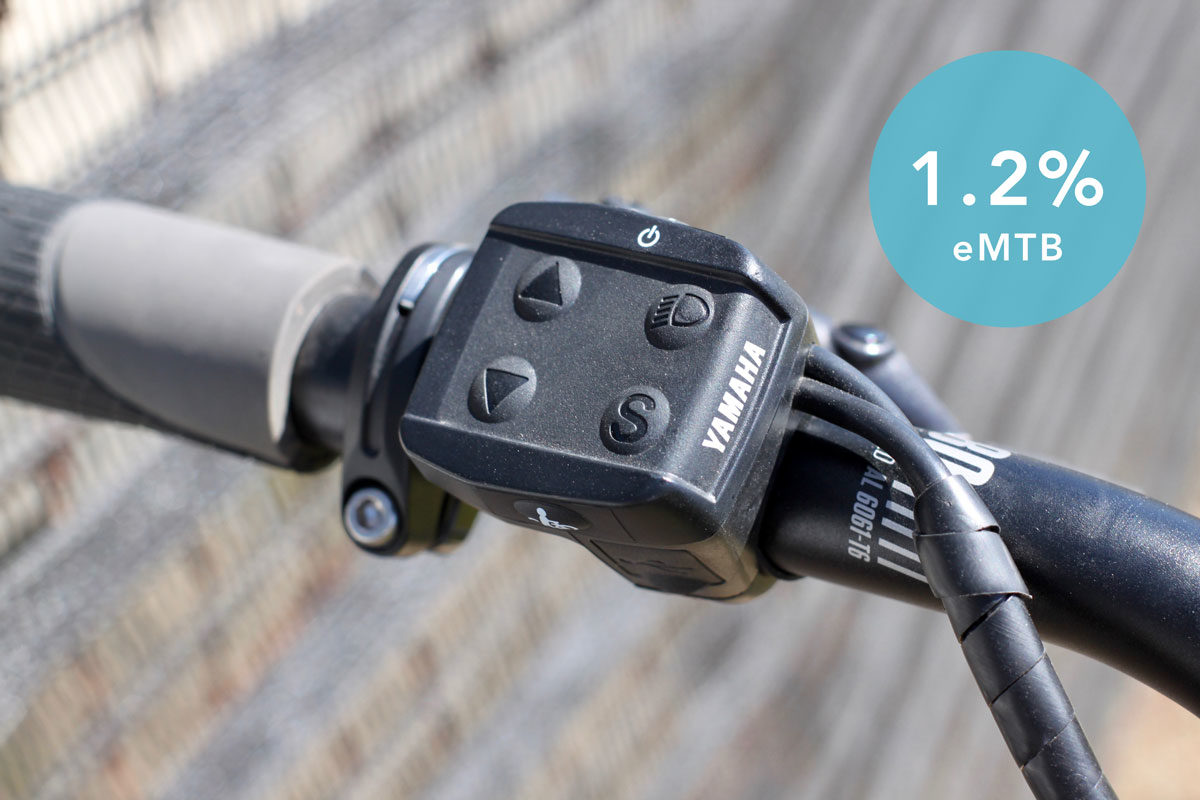 There are some obvious caveats to keep in mind when reading the results below. This was a survey of Singletracks readers only, and while our audience demographics closely mirror the general mountain bike population, there are certainly key differences. Additional considerations are discussed below.

Just over a year ago, 21% of Singletracks readers surveyed said they were interested in electric mountain bike news and reviews. This year, that number stands at 23%. However, we calculated this survey’s margin of error to be ±3% at a 99% confidence level, which basically means… interest in electric mountain bikes could be going up or down slightly, or just staying the same.

Either way, there isn’t a significant uptick in interest, nor is there a significant decline. Because this was an anonymous survey, we also don’t know if the folks who are interested in electric mountain bike coverage this year are the same folks who were interested last year. The simplest explanation is that most people remained either interested or uninterested; my own guess is there weren’t a lot of opinions that changed over the past year.

Do you own an electric mountain bike?

Probably not. In 2016, only 0.9% of survey respondents owned an electric mountain bike. In 2017, that number inched up to just 1.2%. These are small numbers to be sure, but in terms of growth, it’s potentially a big jump–a 33% increase in only a year.

However, we’re talking about really, really small numbers here so just one or two responses can totally skew the results. In 2016, 20 people out of 2,191 said they owned an electric mountain bike; in 2017, it was 26 out of 2,095. That’s an increase of 6 people, but considering the margin of error for the survey and statistical significance, again, it’s hard to say what’s going on for sure. Based on this limited survey data, it seems electric mountain bikes ownership isn’t exactly shooting through the roof, nor is it slowing down.

Only time my opinion changes is when I’m struggling with a long uphill grind…..especially in higher elevations.

Never owned one, but my wife and I were in Switzerland this summer and I rented a e mountain bike for her. It was awesome, she was finally able to ride some high alpine trails with me that she never would have attempted before. I will DEFINITELY be getting one for her in the future, regardless of the bad rap they are getting by the bike community here in the US.

I’ve been riding a 2015 turbo levo expert for almost two years. I’m 63 in decent shape meaning I ride about 25 miles a week mostly mix trail and technical. My compatriates are better riders, significantly. The peddle assist used to allow me to keep up, but riding with great riders has made me a much better rider much faster, not as good as the others….catching up. I’m impressed when any rider can keep up with me cheating. Please consider the advantages of learning faster at 63, there is a timer running for any mountain biker and I’m at the far end off the clock. Take the amount of year’s left, the slow decrease of physical strength and the increase in miles that can be riden on an emtb, you get the math. As all mountain bikers get older their love of biking only increases you may be making argument about knowing some 75 year old who is on a regular bike, but how many of them? We need only look to Europeans to see the writing on the wall 1.2 % here in the USA nearly 50% in Europe. The detractors in America are in for great disappointment, when ebike ban meets ADA disability law who do you think will prevail? If I can just live long enough I’ll be climbing Moab and we can talk at the top when you finally catch up.

I agree with you. I AM 73 and have 5 regular mtb and race them about 20 times a year for the last 8 or 9 years.. But I won’t go to higher altitudes because it is zero fun to not be able to ride up the bunny slope at some ski resort. I have read that an average person’s Oxygen uptake decreases 2 or 3 % a year starting in one’s late 30s.

Peddle assist with 20 mph? Wow I can barely do that downhill on my existing bikes… An ebike will keep me riding until that balance thingy goes haywire.

I’m 78 years old and I love biking. Been biking much of my life, but I do notice it’s just a little bit harder than it was when I was younger – can’t go nearly as far or fast, and moderate slopes have become killers! So I decided to try a mountain bike, and tried an ebike at the Trek store; I was hooked, but the price of $3,000 did not fit my budget. So I researched on the internet, and bought a Cyclamatic Power Plus, with alloy frame, 250 watt rear hub motor, and 36v 10.4a lithium battery, for $750. It is outstanding and has put the joy of biking back in my life. I ride 15-20 miles every day and enjoy it immensely. I am so thankful for ebike technology at this stage of my life!! As always, I always treat other trail users with the utmost courtesy.

On the hunt for E Bike # 2. My Turbo Levo Expert is now almost two years old, has seen a 2 batteries, chargers and one motor replaced under warranty. I shout out to Specialized Bikes for being honorable about covering the repairs, being without the bike is torture I actually had to pedal un-assited for a couple of weeks….OMG. I am never going back to un-assited, at 63 don’t have the strength or endurance of the younger riders in my posey. The choices I am considering are 3, Rocky Mountain Power play 90 and the Turbo Levo S works carbon. All fantastic bikes. I want to reiterate that I am riding over 30 woods/technical miles a week six day last week, five day so far this week. I clearly have problem, “anything worth doing is worth over-doing” I am stronger today than when I started 3 years ago. Having to pedal to get assist keeps us pedaling nearly all the time, hence fitness. Ride-On-E-Bikers.