WTB has made great strides in their 27.5 tire line over the past few seasons. I’ve spent a lot of time on several of their new tread patterns and have been thoroughly impressed. The designs are good, the rubber grips well–but lasts–and the casings are durable yet supple. Whatever resources were put into their tire line have been well-spent.

During my recent test of the Marin Pine Mountain 2, WTB sent over their new 3-inch, plus-sized Trail Boss and Bridger tires for me to try out. Since the Bridger is decidedly more aggressive, I used it as a front tire with the the tamer Trail Boss 3.0 on the rear. Be sure to check out my review of the burly Bridger. 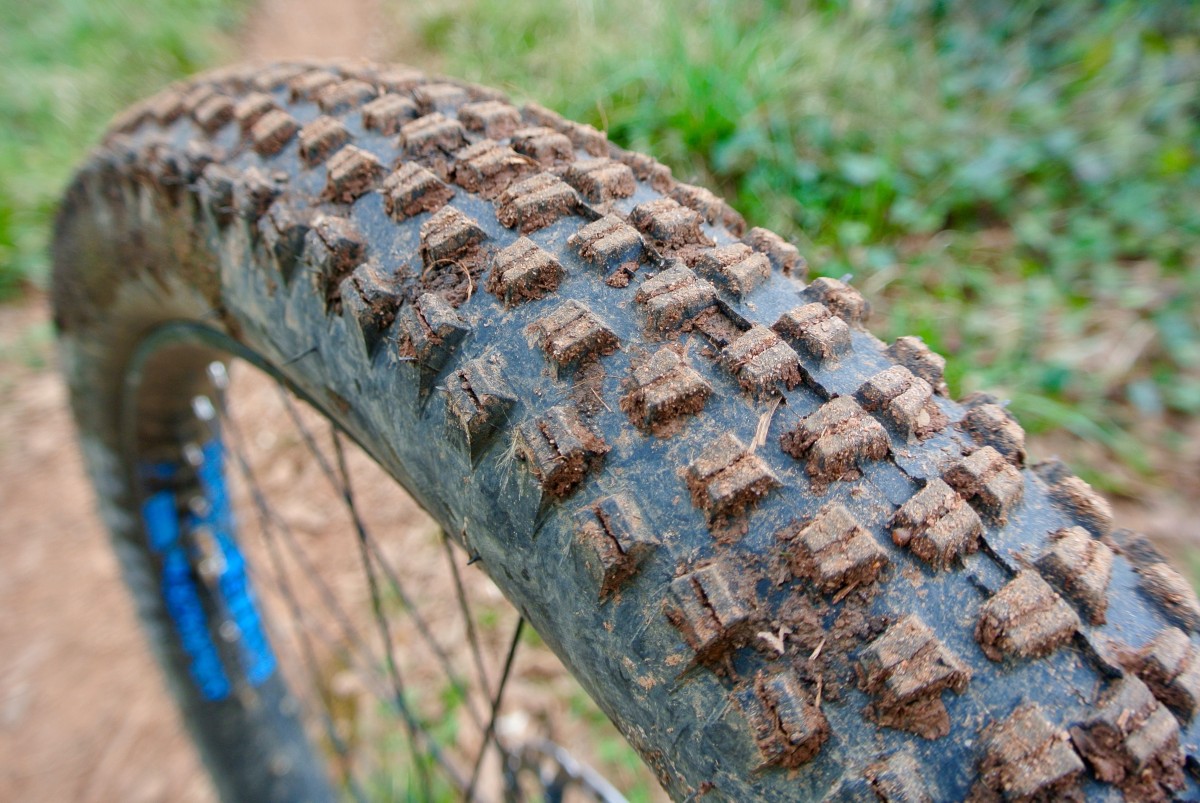 The Trail Boss is not a new tire for WTB, but the plus-sized version is a recent addition to the line. I actually tested the less chubby Trail Boss 2.4″ last year and called it a, “set it and forget it” due to its versatility across conditions. The Trail Boss 3.0 features a similar tread pattern to its skinnier sibling, just with more knobs. While the 2.4″ alternates between rows of two and three knobs at the center, the 3″ uses four knobs per row. The plus tire ditches the long, triangular center knob of the narrower version, but the remaining knob shapes are similar. Sipes–those small slits you see across the knobs–allow the knobs to flex and put more rubber on the ground.

WTB offers the Trail Boss 3.0 with their Dual DNA rubber compound and TCS Light casing. Claimed weight is 1125g, but my sample came in just a little bit under that at 1077g.

As has been the case with all of WTB’s tires I’ve tried recently, the bead was a very tight fit on the rim. As the Most Interesting Man in the World might say, “I don’t always use tire levers, but when I do, it’s usually on a WTB tire.” I found they were easier to get off than to put on, though.

Seating the bead was done with a floor pump–no problem. With such a large tire I used a generous amount of sealant. I didn’t lose pressure or flat during the test.

Compared to the Bridger, the Trail Boss has a much flatter profile. Even though both tires hit three inches on the nose, the Trail Boss looks substantially larger because of its profile. I chose to use the Trail Boss as a rear due to its lower knob height. It was an extremely tight fit on the Marin Pine Mountain 2, even though the bike was designed as a dedicated plus bike and uses Boost spacing. There was just enough clearance at the stays to make it rideable. When putting the power down on climbs I could get the rear tire to buzz the chain stay, and the chain would occasionally rub the tire in the easiest gear.

Apart from the fitment issues, the performance of the Trail Boss left little to be desired. As I found with the narrow version, it does everything pretty well: accelerating, rolling, climbing, braking, cornering. With its huge volume and footprint, I was able to clean technical climbs with more regularity than before. The only time I noticed the weight of the tire was during steep, technical, prolonged climbs. However, it was my legs that would relent before the traction faltered.

I first received these tires right as fall was setting in. With a heavy layer of leaves and pine needles on the trail, it was easy to drift the bike around corners. Apart from a couple incidents where I completely lost traction and ended up on the ground, the drift was controllable. I blame that on the trail litter, though, not the tire. As we progressed into a really wet winter, the Trail Boss 3.0 kept chugging along in all but the thickest slop.

On dry trails, the Trail Boss absolutely rips. If you’ve got the legs to stay on top of your gear, it rolls along well for such a mass of rubber. It remains composed when thrown into berms, and the additional knobs provide audible feedback.

The Trail Boss 3.0 is quite similar to the 2.4″ version I tested before: it’s a solid mountain bike tire that performs well across a broad range of conditions. The only area where it struggles is in loose over hard–difficult for any tire, to be sure. Even when it does break traction, it’s controlled, and easy to handle.

If you have room for a 3″ tire in your frame and don’t need something as burly as the Bridger, check out the Trail Boss 3.0. With an excellent rubber compound, casing, and reasonable $68 asking price, it’s an attractive option.

Thanks to WTB for providing the Trail Boss 3.0 for review