“Is it possible to become addicted to a pair of sunglasses?” I thought to myself as I was driving down the lonely interstate through eastern Colorado.

The notion of becoming addicted to a pair of glasses sounded absurd even as I thought it, but then I realized that it wasn’t so crazy after all. But the thought had never crossed my mind before, until I spent seven months reviewing the Jawbreakers from Oakley–both on the mountain bike trail, and in everyday life. 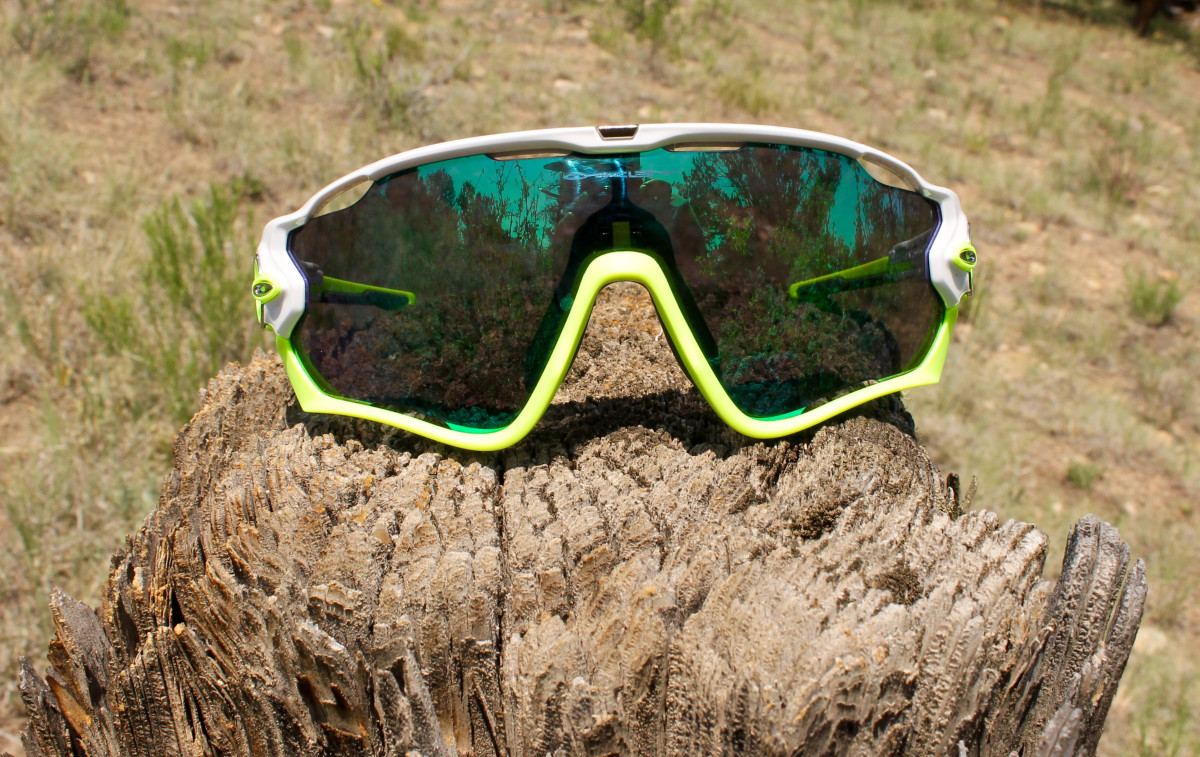 The Oakley Jawbreakers come in a wide variety of color options, so you don’t need to own a pair that look as flashy as mine. More on that later, but even in their most muted of colors, the Jawbreakers still make an impression. Check out more color options here. 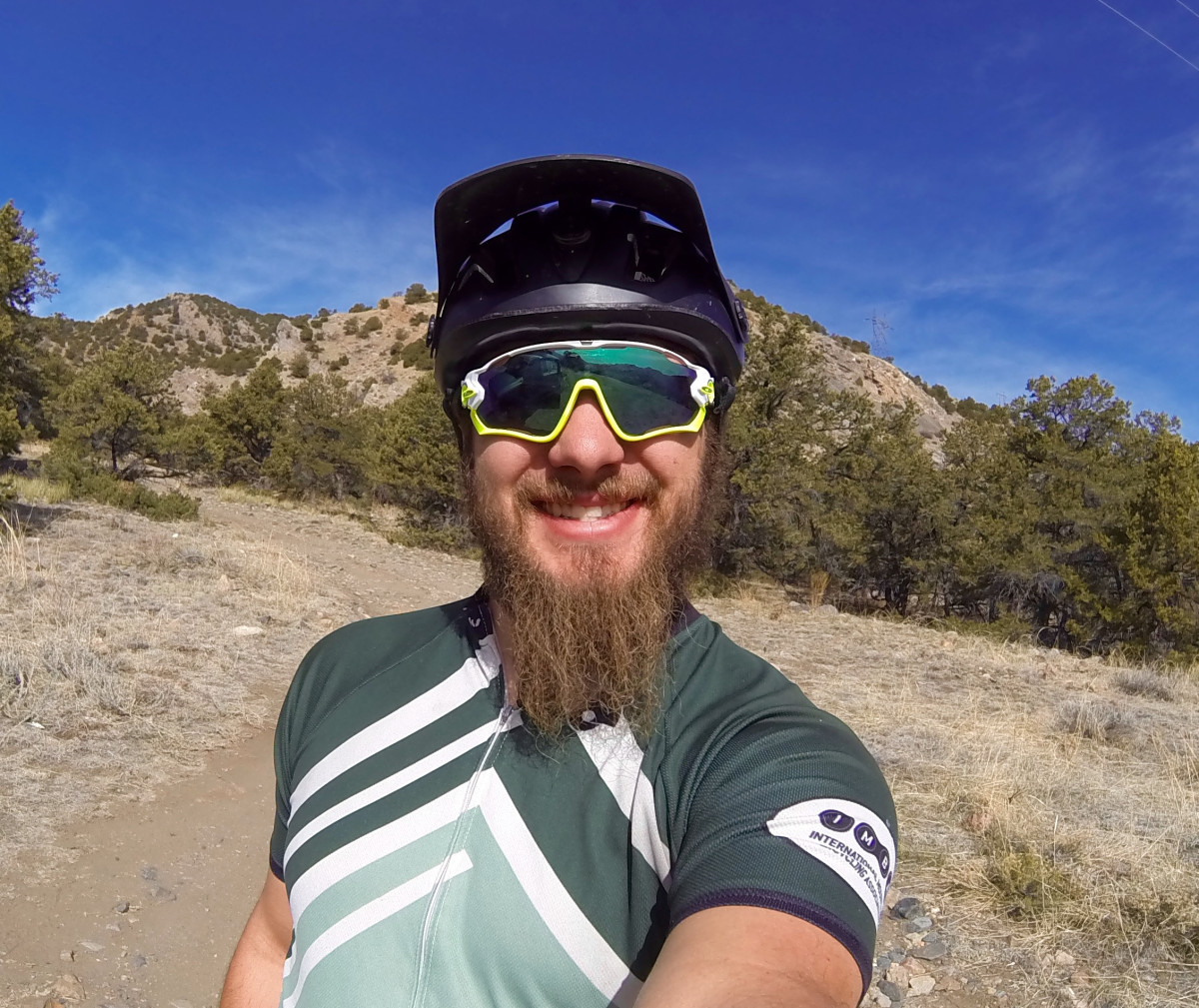 The shades I selected came with a Jade Iridium Plutonite lens and an OMatter Plastic Composite frame, all backed by a two-year Oakley warranty.

The lenses include two specific types of technology: HDPolarization to filter out “99% of reflected glare without the haze and optical distortion that can come with traditional polarized lenses,” according to Oakley, and patented High Definition Optics, which provide “superior optical clarity and razor-sharp vision at every angle,” according to Oakley.

The frames themselves contain “Unobtanium” contact points on the ears and nose that remain sticky and glued to your head, in spite of sweat.

“So how can a pair of glasses be addictive?”

That is the question I asked myself. And the answer is kind of surprising: Oakley’s marketing mumbo jumbo isn’t actually mumbo jumbo. They aren’t bragging when they claim that their glasses provide “High Definition Optics.”

When wearing the Jawbreakers, I feel like I’m seeing the world in HD.

I love that they call this tech “High Definition Optics,” because I arrived at my own high definition metaphor before even reading through all the spec information. But how does this differ from other glasses? Until you try the Jawbreakers yourself and compare them side-by-side to other shades, it’s difficult to understand, but I’ll do my best to explain.

Because of the way that the Jawbreaker lenses cut down on glare and haze from harsh sunlight, they seem to enhance the borders around everything in your field of view. When looking at clouds in the sky, I could move the glasses up and down, peering through the lenses and then down below them, and the depths of the clouds and the borders around the edge would visibly stand out much more sharply through the Jawbreakers–exactly like applying an HDR filter to a photo.

But what does this mean for mountain biking? It means that the Jawbreakers will actually help increase the visible definition around obstacles in the trail like rocks, roots, and drops, allow you to see more of the trail contour, and in general have better visibility of changes in the trail. They actually help you see the trail better, instead of just blocking excess sunlight.

Perhaps the most addictive feature I’ve noticed is that the Jawbreakers make colors in the world around you seem deeper and more vibrant. I think this is partially due to the intense sunlight washing out some of the colors when you’re not wearing sunglasses, but there’s something else going on in these lenses that helps enhance each of the colors, without adding a tint to everything or just dimming the light, like some other glasses tend to do.

After riding for hours with the Jawbreakers on, I will sometimes reach the top of a climb with an incredible view, and my standard response in the past was to take off my glasses so I could really drink in the epicness of the scenery around me. However, when I take the Jawbreakers off, the world looks duller, flatter, less colorful, and less interesting.

As a result, I find that I never want to take them off. This is why they’re so addictive!

I’ve found this “life in HD” effect to hold true even in cloudy conditions, even without intense sunlight. Consequently, I find myself unconsciously wearing my Jawbreakers when I really don’t need them, because the world around me just looks better through these magical lenses.

Of course, you can’t wear them when the light is too low, because there’s no photochromic adjustment in the lenses. But especially in Colorado, if it’s not full-dark out, it’s probably fine to be wearing my new favorite pair of shades.

The Jawbreakers also provide an incredible anti-fog coating on the lenses. If I’m not paying attention and am breathing heavily, my breath will fog up the lenses for an instant, but then I can watch the fog visibly dissipate. The built-in vents around the edges of the lenses likely aid in this effect.

That said, I can’t personally vouch 100% for the anti-fog qualities of the Jawbreakers, as I have not had the chance to test them in the most humid climate known to man: Atlanta in the summer.

No matter how good the lenses are, no pair of glasses can survive without a durable pair of frames to hold them. The Jawbreaker frame is perfect for the mountain bike application: plenty of vision out the large lens, with upper visibility specifically designed for cycling, and plenty of peripheral vision. 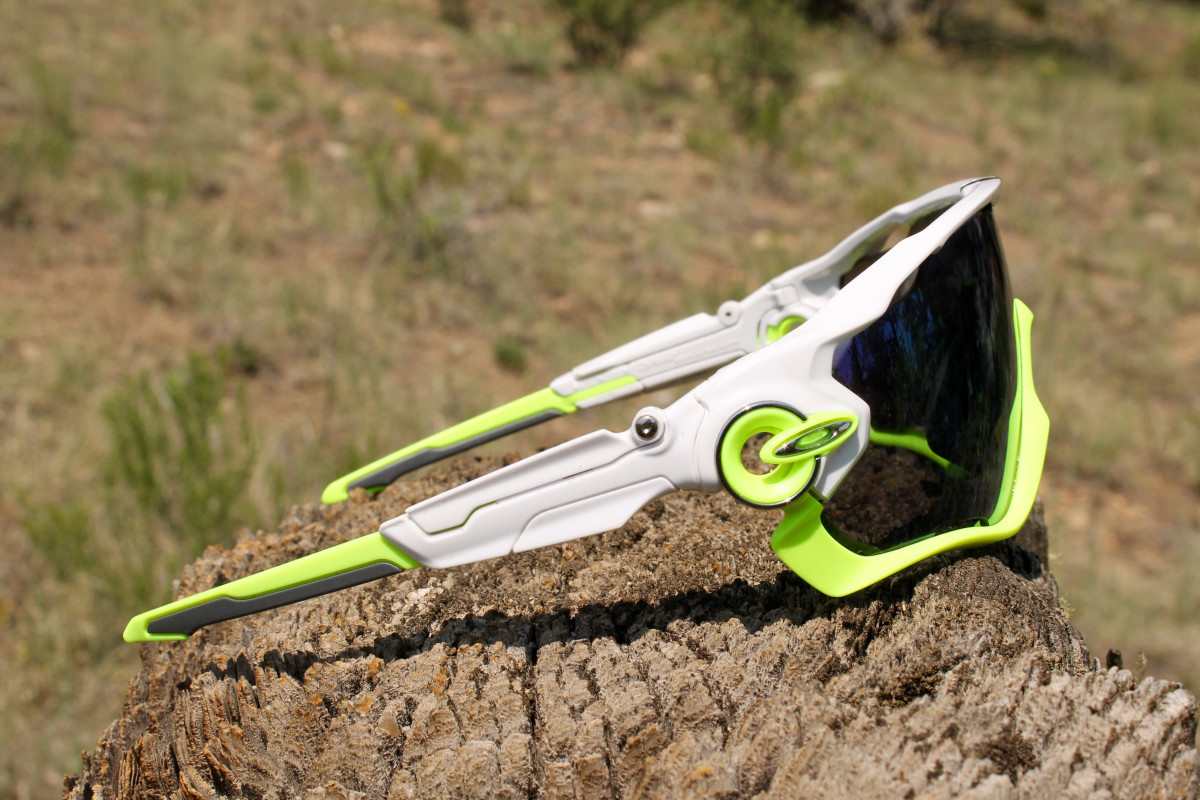 But most importantly, the arms mesh well with helmets. The arms are strong and keep the glasses firmly in place, yet despite the strength they look very minimal and are very low profile, running close to the head. This allows them to slip easily below any and every helmet strap design, with no complication and no fuss. Simply put, they just work.

There’s no getting around the fact that the Jawbreakers are flashy. By simply wearing these glasses, I’m making some kind of statement. Exactly what that statement is, I’m not sure… maybe you can fill me in in the comments section below. 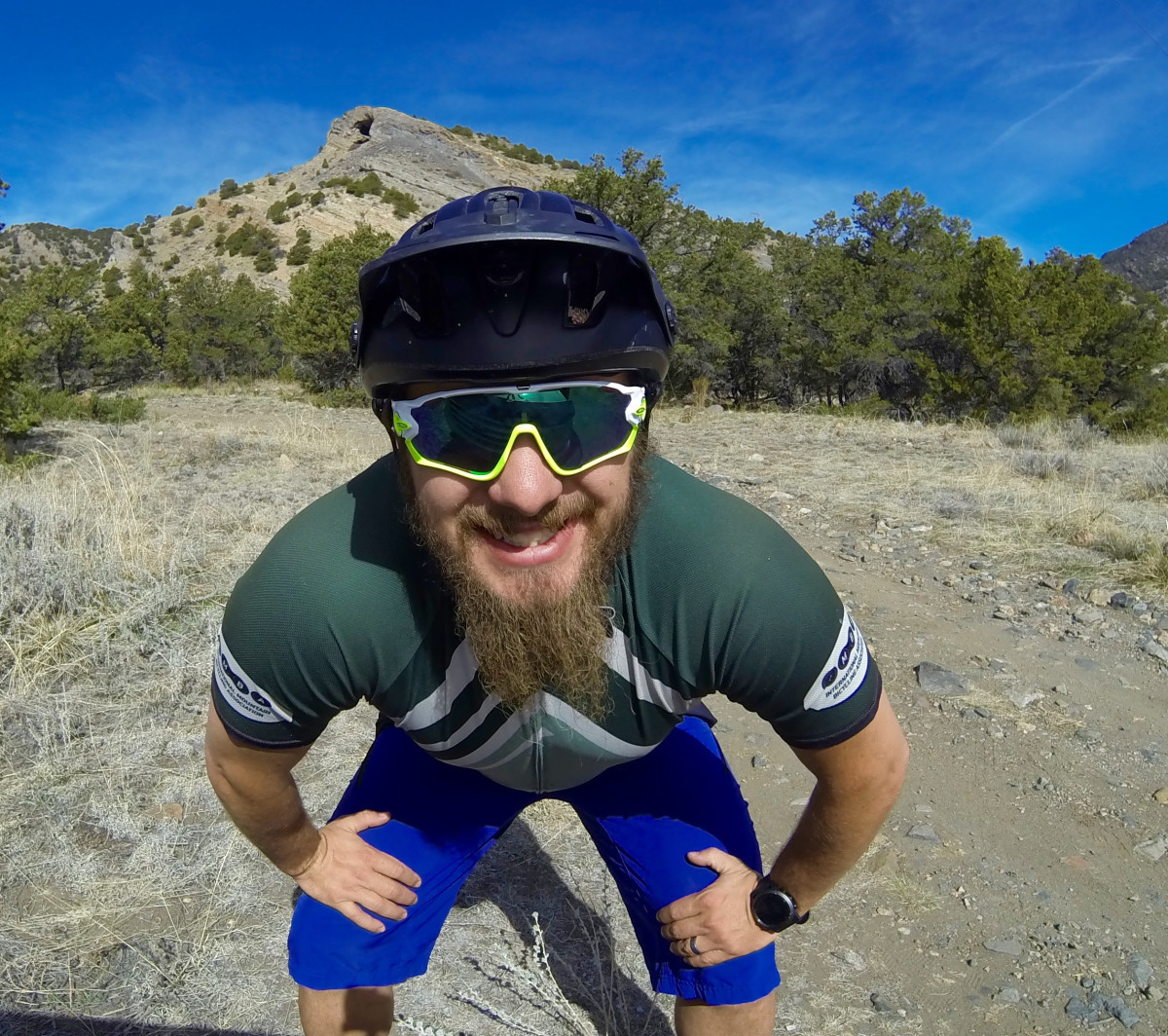 At first, I thought I wouldn’t be able to pull off the flashiness, and would have to go back to a more subdued pair of shades. However, as you can no doubt tell from the analysis above, I’m addicted to the Jawbreakers, and like a crackhead who just can’t quit, I’m not going to be quitting the Oakley Jawbreakers anytime soon!

Thanks to ShadeStation.co.uk for providing the Oakley Jawbreakers for review.