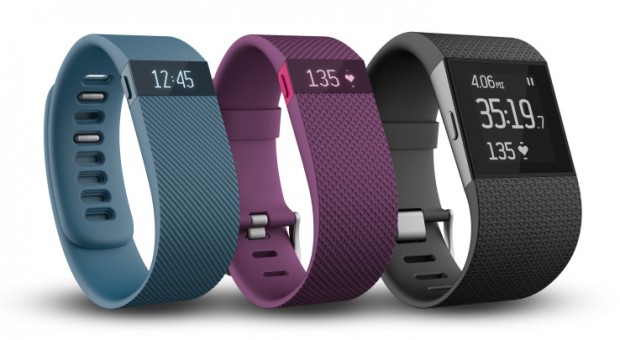 Mountain Bikes! We love them. But if you’re riding without recording the fact that you rode, forget it. You might as well have stayed home. Ask any doctor, and they’ll tell you: unless it’s on the internet, it didn’t happen.

A GPS trace isn’t enough, either. You also need at least one selfie and at least one bike lean photo, or your body will put itself into a state of hibernation during the ride, like a zombie created from a dead MTBer. You’ll be able to turn the pedals, but you’ll get no benefit from the exercise. And you’ll probably crave brains, too.

FitBit can’t help you with your photos, but with the GPS recording in mind they have announced three new devices today. But then they inexplicably took back two of the three, so really only one was announced. From left to right in the photo above we have the Charge, the Charge HR, and the Surge. But the Charge HR and Surge won’t be available until 2015.

The Surge is billed as a “fitness superwatch” which can record everything about your body, including your exact location when you were contacted by spam texts and emails you as you exercised.

Here’s a video showing people exercising so hard using the Surge that their watches emit R2D2 style bleeps and blorps:

And here’s the Charge HR, showing how intensely you can walk your dog, and how doing a butt dance will make men back away from you.

And finally, the regular old FitBit Charge, which is for people who would otherwise be unmotivated to ascend subway stairs, thus forcing them to live inside the train station forever:

Don’t let your rides go to waste. Get out your wallet and get yourself a fitness tracker so you can unlock your full potential. What are you posting to Facebook now? Baby photos? Some political rant? Bah! Get in people’s faces with your activity. Make it count!