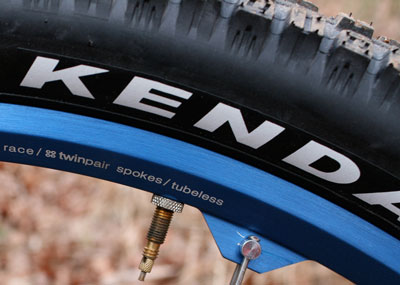 After recently discovering that my semi-slick tires were hopelessly full of dry rot (see photo – not for the squeamish!) I started looking around for a good set of mountain bike tires with low rolling resistance. Luckily I found the Tinker Juarez Signature Series “Dred Tread” tires from Kenda that blend the best of both worlds: low resistance with wicked control through turns and climbs.

The Dred Tread tires feature low profile center knobs with standard knobs on the sides to assist in cornering. On straight sections of hardpack and pavement the tires barely hummed and felt smooth as butter – yet climbing in damp dirt and roots the tires only spun out occasionally on especially slimy, steep sections. The Dred Treads really shine in cornering where the tires felt as if they were full-knobbies, sticking to tight lines without so much as a slide or wobble. 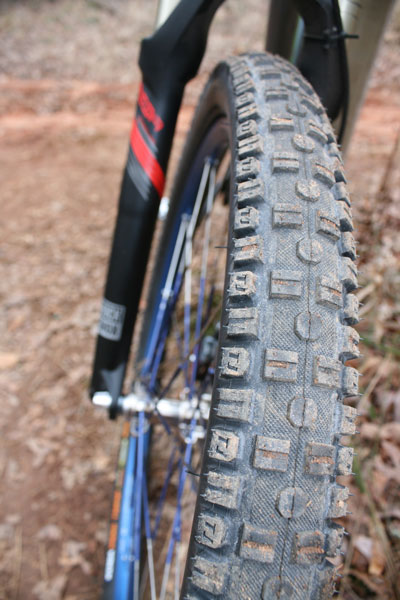 Kenda uses what they call a “Dual Tread Compound” or DTC on the Dred Treads: a softer, grippier rubber on the outer treads and a harder, longer lasting rubber on the center treads. The upshot: tires will last longer before you need to replace them (that is, unless you’re riding around in circles).

The low profile center tread has another advantage as well: The Dred Treads shed mud like my German Shepherd sheds fur (which is all the time). Actually, these tires don’t really shed mud since mud doesn’t get caught in them in the first place – the tread pattern is far too wide to catch much of anything. As you can see from the photo above only the smallest crevices collected dirt on a recent ride which means you’ll be rolling fast all day long.

I’m a big fan of simplicity when it comes to mountain bikes and equipment and the Dread Tread tires are especially simple to install. First, there is no distinction between the front or rear tire treads – the pattern works equally well in the front and the back. Secondly, the Dread Treads don’t even have a directional rotation pattern – there’s no way to put them on backward! The folding bead went on super tight on my Crank Brothers Cobalt rims with no surprises.

After riding these tires in the woods and on the streets I haven’t found a single thing I’d improve about them – though I’ll stop just short of calling them perfect. The Kenda Dred Treads are a great tire for XC riders looking to cut down on rolling resistance without sacrificing much in terms of performance. Besides, if Tinker rides and endorses these tires how can you argue?

Gear
MTB Deals to Help Beat the Heat
Trails
Cuyuna and Pisgah Add New Trails, While Utah Gets a...
Progression
Sizing Up or Down Based on Riding Style Can Work,...
Trails
Passing By: Mountain Biking the Steep and Rugged Trails of...
Subscribe
Login
Please login to comment
4 Comments
Most Voted
Newest Oldest
Inline Feedbacks
View all comments

Nice review, i like the Crankbrothers wheel set as well… Now i am wondering how they work as well….And i am so jealous real dirt……I am up to my eyeballs in snow! And it keeps comming!…I can’t wait to hit the trails.