The day after I got back from Crankworx Whistler I proudly wore my new t-shirt dedicated to the Rocky Mountain Slayer. My girlfriend and I were perched at a booth in Qdoba eating burrito bowls when a group of young guys wearing all black walked by, noticed my shirt, looked at me and gave me the horns, pinky and index fingers high. “F*ckin’ Slayer!” one of them said.

Whoa, people are stoked about the new bike, I thought. I was too. After that, continuing on with our Sunday errands, a produce stocker at the grocery store looked at me and nodded with a grin across his face. “See em last time they were in town?”

“Uh, no. This is actually a shirt related to mountain biking.” I watched the enthusiasm in his eyes die. Quickly I realized that mountain biking is an even smaller sub-culture than metal. Still, I felt pretty cool for a few moments.

Although everyone may not be in the know, there is plenty to be stoked on when it comes to the 2020 Rocky Mountain Slayer. If you couldn’t tell by the name of the make and model, it’s still here to do one thing: Slay.

For the full details on the bike, check out the release article here. In short, Rocky Mountain redesigned the entire bike. It’s now available with 27.5-inch wheels and 180mm of travel front and rear, or 29er wheels and 170mm of travel. The Slayer takes on new kinematics as well. Much of the feedback the brand received on the last generation was that it felt a little harsh, possibly because they raised the anti-squat values a little too much for better pedaling characteristics. The new Slayer still gets a helping of anti-squat, but is said to be better balanced with small bump compliance and reduced pedal kickback.

The frame emphasizes durability, with a bridge in the front and rear triangle. The front triangle bridge is a little reminiscent of the Rocky Mountain Flatline, the predecessor to their Maiden model. The rear triangle is alloy and made for abuse, also with a bridge for added stiffness. 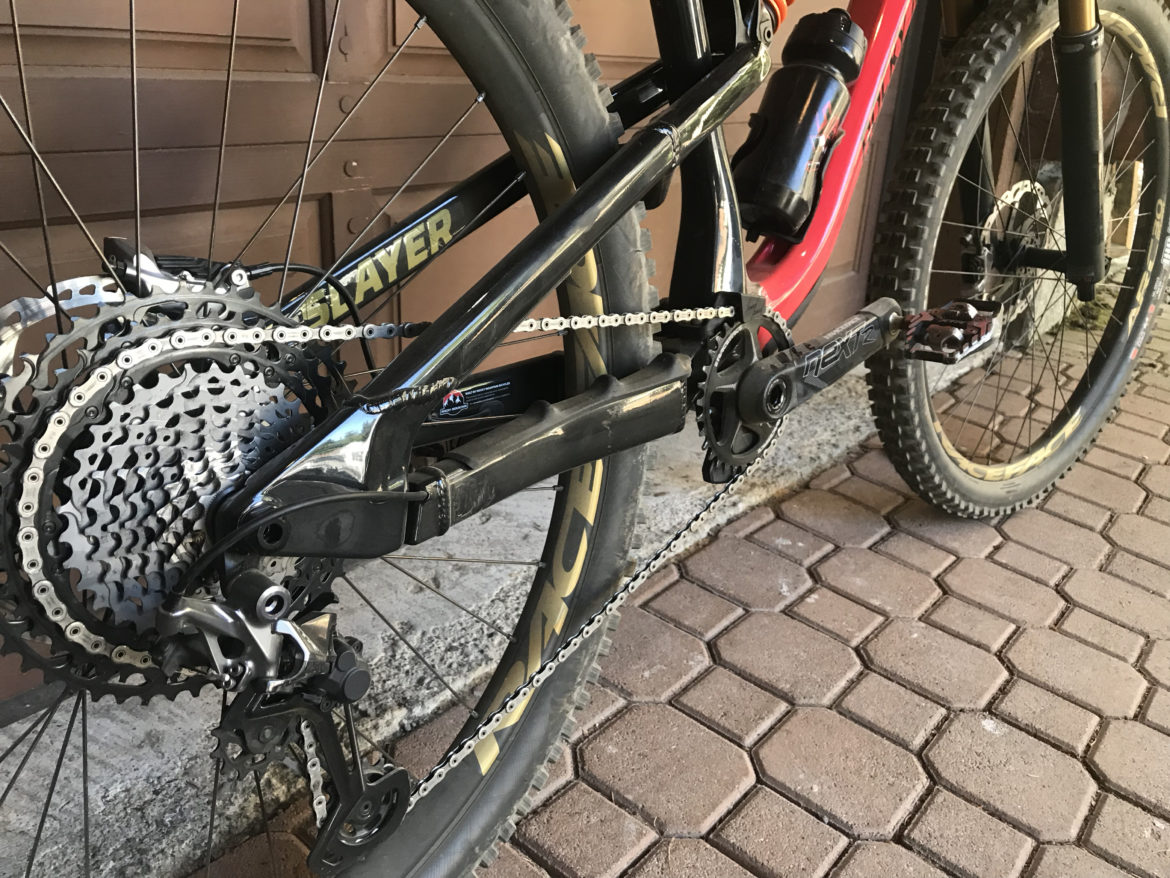 When I hopped aboard the 29-inch Slayer for a ride in the Whistler Bike Park, I assumed that it would feel like an enormous heathen, long and unmanageable. The wheelbase and reach had grown considerably, but it actually felt pretty comfortable. On the medium I rode, the reach ranges from 453-462mm depending on the geo position. Even in the shortest reach setting the Slayer is almost an inch longer than the previous frame.

I also assumed that the added travel, wheelsize, and length would add up to a bike that feels like a boulder tumbling down the mountain, heavy, dead, and without a personality, but I found it’s still apt to pop off the lips of tabletops and fat roots. That isn’t to say that the 2020 Slayer won’t stick to the ground at speed and charge hard through gnarly trails. It does this well too, especially since it is specced with a coil shock, but is still ready to leave the ground at the rider’s request.

As I spoke with Rocky Mountain’s athlete manager, the Slayer’s personality started to make more sense. He didn’t predict that EWS athletes Jesse Melamed, ALN, or Remi Gauvin would ditch the Instinct for the new Slayer. The Instinct seems to offer enough travel for the athletes, is more nimble than the Slayer, and better prepared to climb if an EWS stage has a rogue hill. He didn’t foresee Carson Storch using the Slayer at Rampage either, although it is dual-crown compatible. The Maiden makes for a better trick bike, although Storch did send some major backflips and whips on the new Slayer during the Cranworx Whip-Offs. 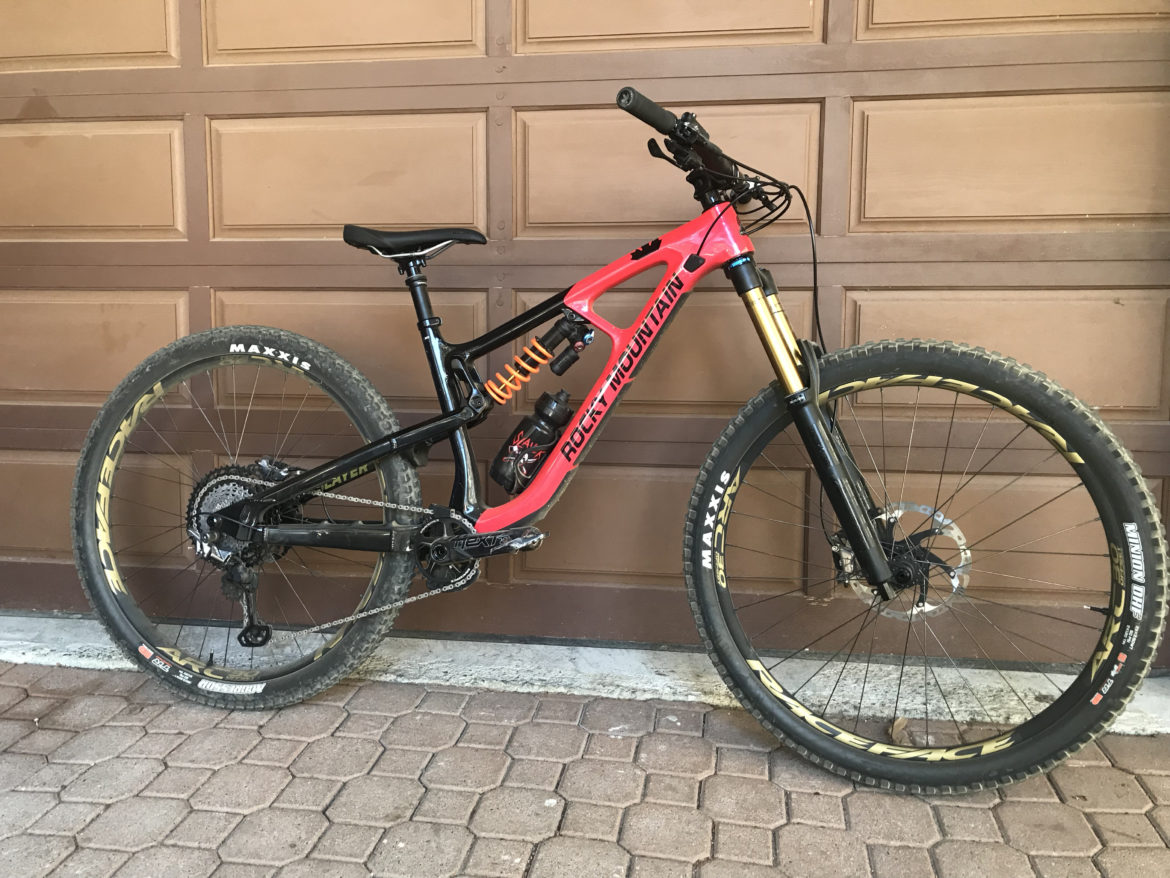 All in all, the new Slayer seems to be back to its freeride roots more than ever. It’s a little much for some enduro racers, and might be too carefree to serve as a dedicated DH bike. The bike has a very decent feeling pedaling platform for climbing to the top of a fireroad so that riders can take the most vertical trail back down. It’s also right at home in the back of a truck bed, which is why Rocky specced it with shuttle guards on the down tube.

Riding the Slayer in Whistler Bike Park, close to Rocky Mountain’s home, the bike’s intentions are as clear as high alpine water. The Slayer wants to go downhill, as fast as possible, and doesn’t care what’s in the way. It doesn’t take a long look to figure that out.