I really wanted to ride one of the Jamis full suspension 650b bikes, but the one they brought in my size was always out. So instead I threw a leg over the Dragon 650, which is a steel hardtail with a fairly slack 68° head tube angle. 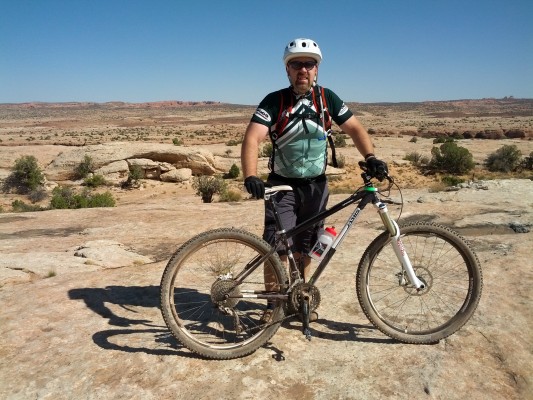 So of course I take the steel hardtail and head out on to the Circle O trail, which includes 3 miles of bumpy, wavy slickrock.

The Dragon pedaled efficiently and handled the steep ups and downs of the slickrock OK. Admittedly I was ready to be done with the bumpy slickrock after a while, but as an all-around trail bike I could see this being a worthy addition to someone’s quiver.

The Shimano SLX component group worked perfectly, but I’m a little surprised that Jamis didn’t go all the way and also equip SLX brakes with Ice Tech rotors. The Avid Elixir 3‘s seem a little out of place on a bike this expensive.

This was my first ride on a White Brothers Loop 650b fork and I was impressed. It is every bit as smooth as the two Fox forks I have owned. The American Classic wheels were ok, as were the Kenda Nevegal tires.

Is 650b poised to to take over the MTB world? I don’t know. But I do know that this bike rode MUCH more comfortably than my old 26″ hardtail, and yet the handling was more nimble than most 29ers I have ridden.

The only thing I can really knock about this bike is the $2,700 price tag. That’s $300 more than my Giant Anthem X full suspension 29er.

Gear
MTB Deals to Help Beat the Heat
Progression
How to Ride Flat Corners on Your Mountain Bike
Progression
Sizing Up or Down Based on Riding Style Can Work,...
Trails
Cuyuna and Pisgah Add New Trails, While Utah Gets a...
Subscribe
Login
Please login to comment
4 Comments
Most Voted
Newest Oldest
Inline Feedbacks
View all comments

Steel is more expensive than aluminum, which definitely drives up the cost. And IMO, 650b bikes are, in general, a little bit higher in cost right now. If they really catch on, I think we can expect to see 650b prices level off with the rest of the industry.

But you can’t ignore the fact that this is a steel frame.

Humphf, back in my day aluminum was more expensive than steel (for bikes anyway). Of course steel is back in fashion with the boutique builders because it’s easier to work with than aluminum which makes it seem like it’s the more expensive material. Plus China seems to have an insatiable appetite for the stuff (though not for bikes) so that could be driving prices up to some degree.

“Plus China seems to have an insatiable appetite for the stuff”

For example, to make these frames … (at Kinesis)

Aluminum frames can be made cheaper than steel frams nowadays I believe, especially if you look at higher end steels, not just hi-ten or 4130. The Dragon uses Reynolds 853 tubing, which is good stuff.

$2700 is a lot of money for an SLX level hardtail though. But I do love the ride of steel!